After a 2022, that was still subject to many uncertainties, the dynamics observed in the hotel market turned out to be particularly strong in the second half of the year, despite a macro environment that is slowing down. Despite this new, somewhat destabilising context, the signals seem to be positive or the hotel business in 2023. Although the results on a continental scale were favourable at the end of 2022, many questions remain unanswered. Will the dynamics of average daily rates hold? Will the energy crisis persist and affect tourist travel? Will the drop in visitors' purchasing power result in a drop in visitor numbers? Although booking rates at this stage are encouraging, will concerns still weigh on the sector?

From mid-2022, European hotels proved more resilient than other sectors

The beginning of 2022 started in the red for all of Europe's leading destinations due to the new epidemic wave, but the fine weather marked the beginning of the real recovery with performance levels finally exceeding those of 2019 for many countries.

However, as the winter months approached, marked by the return of epidemics combined with persistent geopolitical instability and the timid return of foreign customers, the health of the European hotel industry was again somewhat threatened in November.

Many sectors of activity experienced a slowdown at the end of 2022 due to inflation, the energy crisis and geopolitical conflicts, social unrest, and labour shortages. Despite these obstacles, the European hotel industry, which was also affected, recorded an upward trend.

The European recovery trend, which for a long time was concentrated in certain countries only, particularly in southern Europe (Italy, Greece, and France) and the United Kingdom, became truly pan-European as the end of the year approached. Many countries that had been left behind in the recovery, such as Germany and the Benelux countries, finally started to bounce back in the second half of the year. 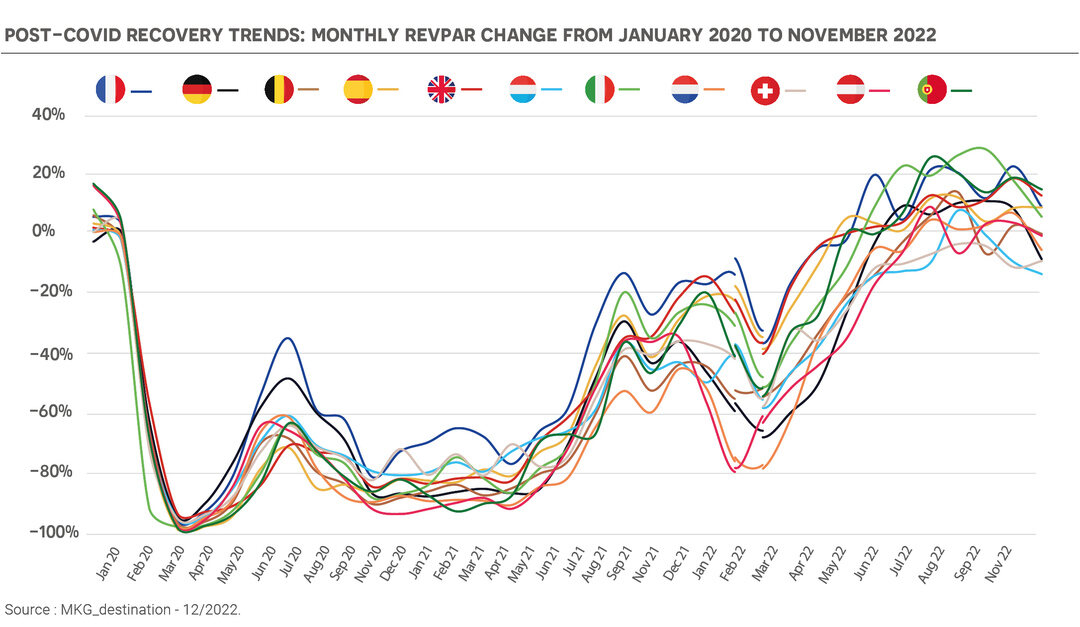 Overall, even though macroeconomic activity had already slowed down (only +0.2% GDP in Q3 2022 in France for example), a clear improvement in hotel performance has been recorded, with double-digit increases in the hotel market.

And so, thanks to this confirmed hotel recovery in 2022, the median scenario for 2023 (MKG forecast as of December) forecasts a solid improvement in performance for the coming year. The picture, which was still very mixed in 2022 on a European scale with business and international destinations lagging behind, is improving with a positive median scenario for 2023 in all the major European markets ranging from a 3.3% increase in France to a 15.4% increase in Belgium.

The forecasts are particularly good in Germany, the Netherlands, and Belgium, where double-digit increases in RevPAR have been recorded, when compared to the pre-COVID period.

Indeed, the slowdown in the macroeconomic environment is more moderate than expected in Germany, where GDP growth forecasts for 2023 were deeply negative and have been significantly revised upwards in recent reports. Combined with improved hotel market dynamics, this provides significantly stronger support for RevPAR growth in Germany and Benelux in 2023, in the wake of a stronger 2022 year-end. 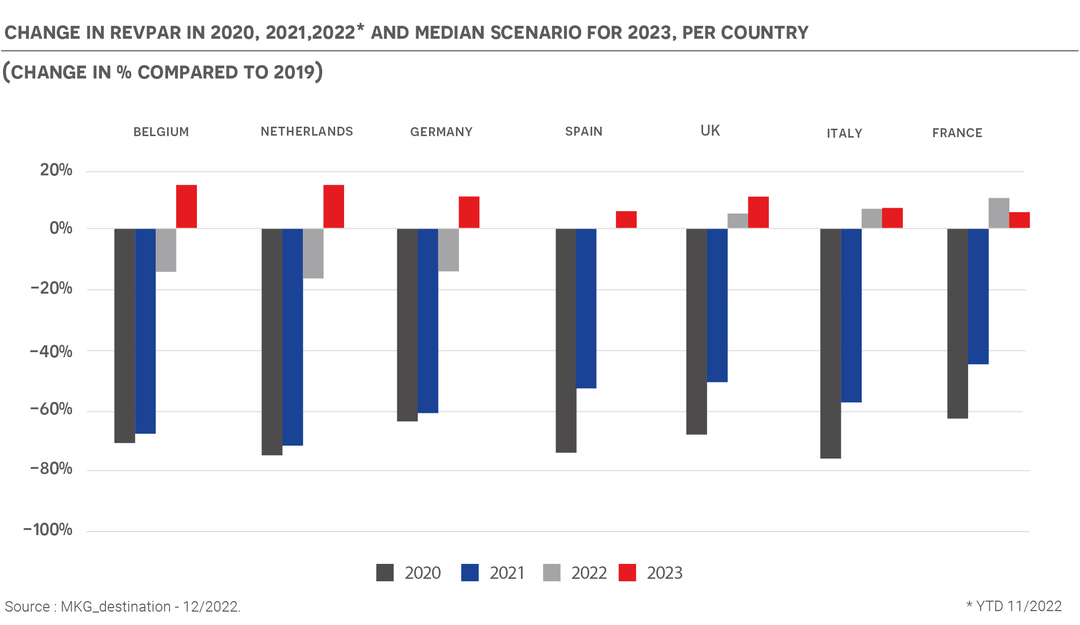 The hope of stability depends on many factors

However, given the strong uncertainty linked to the macro stakes, it is important to take into account different 2023 scenarios. The most positive hypothesis reflects a rebound in economic activity supported by a growth in hotel activity not penalised by the macroeconomic context, strong growth in GDP, and a good resilience of the market. On the other hand, the least positive hypothesis is based on a slowdown in economic growth not sufficiently compensated for by inflation, thus penalising the sector. However, the middle scenario is the most likely.

Indeed, due to a strong downward revision of GDP growth in 2023 by the OECD and Central Banks regarding the autumn forecast (from +1.3% to +0.3%) cumulated with the higher performances in 2022, the RevPAR forecast for 2023, when expressed as a percentage relative to 2022 has declined slightly. Nevertheless, it is much higher than previously in terms of both level and percentage, relative to 2019.

In addition to the resilience of the hotel market to the macroeconomic context, inflation has also been revised sharply upwards (from +3.4% to +6% for 2023), investment is holding up well (GFCF at +2.8% in 2022 and +0.8% in 2023), and the employment market (an unemployment low by historical standards, at 7.1% in metropolitan Portugal as defined by the ILO) remains a solid support in terms of demand, even if the outlook for purchasing power calls for caution on this front.

Furthermore, European hotel performance is also correlated to exchange rates, and in particular to the euro/dollar parity which has been an important "exceptional" support for the increase in activity observed in the second half of 2022, particularly in the high-end segment. Indeed, the fall in the exchange rate had generally made price increases painless for dollar-denominated customers - the USA, the Middle East, etc. -, especially in relation to the inflationary context of their domestic markets. 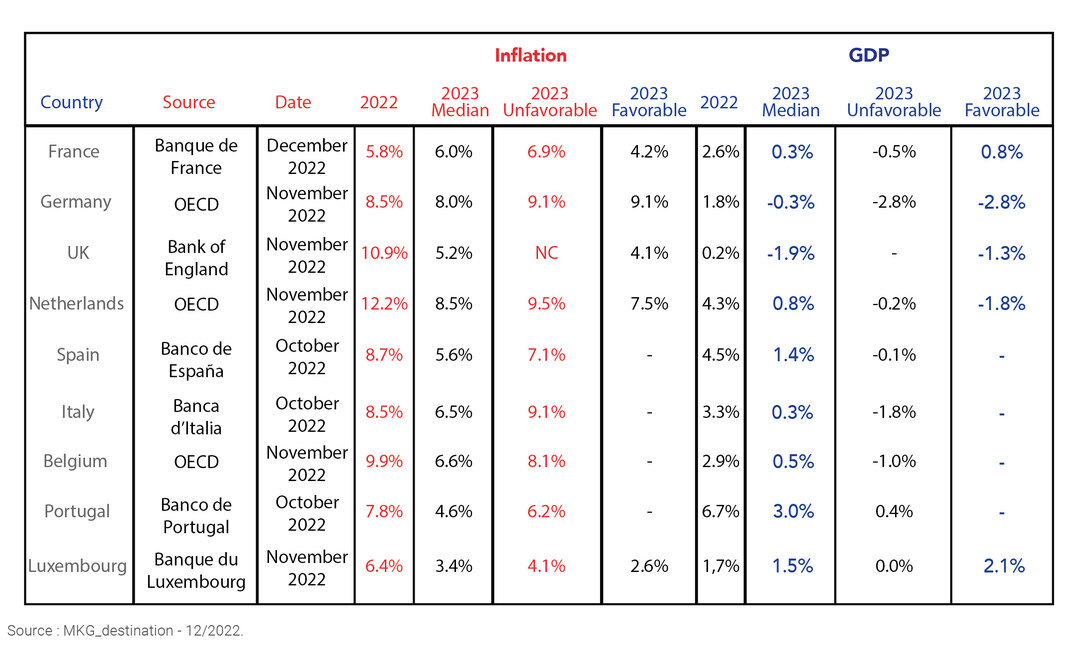 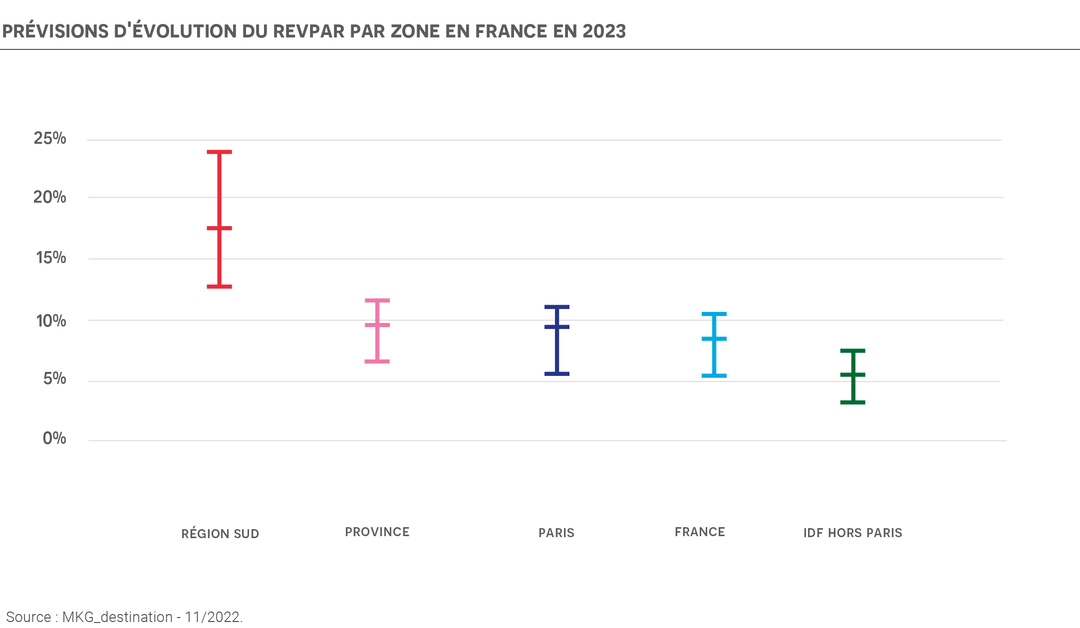 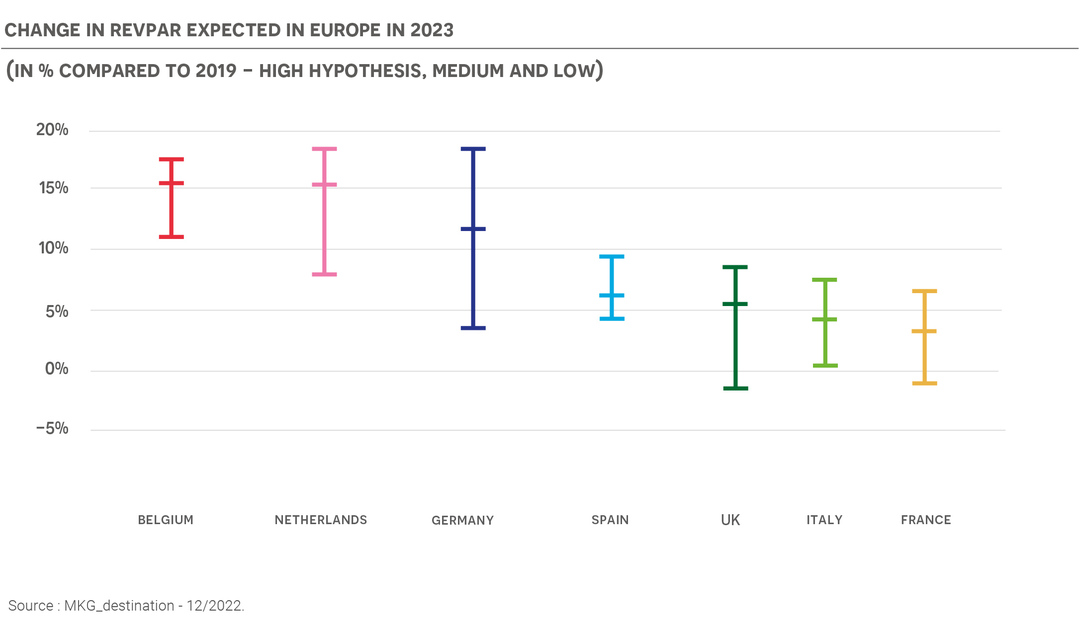 More moderate growth in France, but recovery is evident

The good news is that "realised" growth was even stronger than expected in France at the end of 2022. However, the macro-GDP growth forecast for 2023 has been revised downwards. Although this is partly offset by inflation, which is expected to remain high for longer, the growth target for 2023/2022 has therefore been revised downwards (to +3.3%). Nevertheless, as the 2022 base will be stronger and hotels will remain fundamentally strong, RevPAR for 2023 is expected to exceed pre-COVID (2019) levels by 10% during 2023.

Geographically, not all of the territory will be affected equally. However, while the French capital and its region have long suffered from the lack of dynamism, the Ile-de-France region outside Paris will benefit from the return of the Paris Air Show in June and the improvement in the Paris market in recent weeks and in the future (the city's RevPAR increase is expected to be +18.6% compared to 2019, i.e. +3% compared to 2022). This favours the return of overflow/communicating effects towards the metropolitan area, allowing for better 2023/2022 growth in IDF, excluding Paris (+5.3%), even if it will remain below the others relative to 2019.

Conversely, the Southern Region is expected to be impacted by a "technical" effect on annual RevPAR as activity was both highly concentrated and very dynamic in 2022 in the most contributing months (June-September). The rebound in volumes in January-May will mechanically moderate the increase in annual Average Daily Rates. Nevertheless, RevPAR is expected to rise by 16.5% when compared to 2019, versus 10% on average compared to 2019 in France as a whole, and by 3.3% compared to 2022. 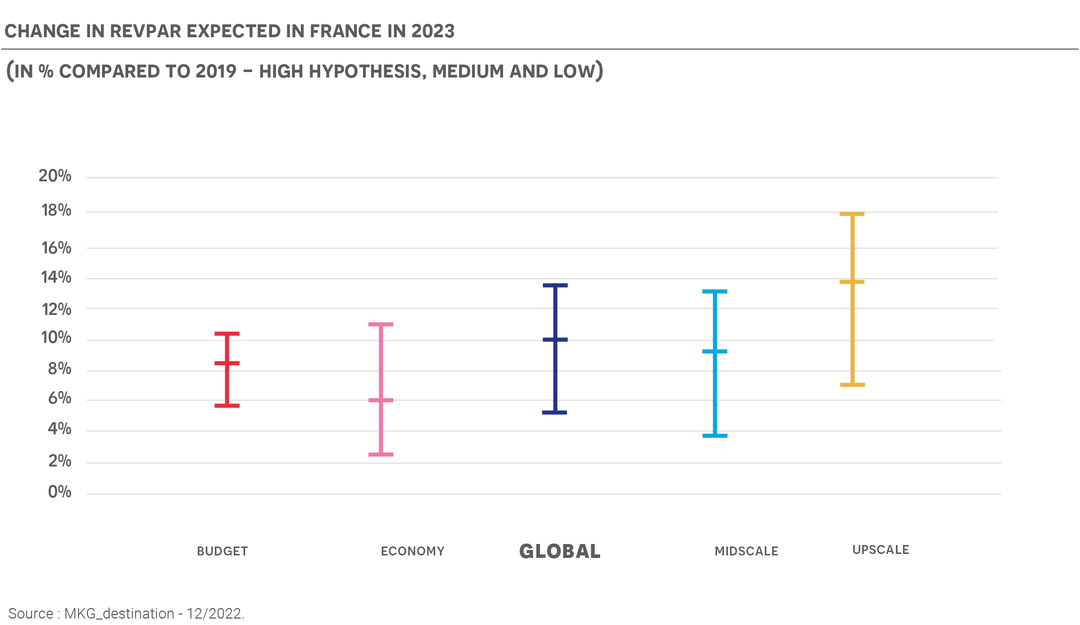 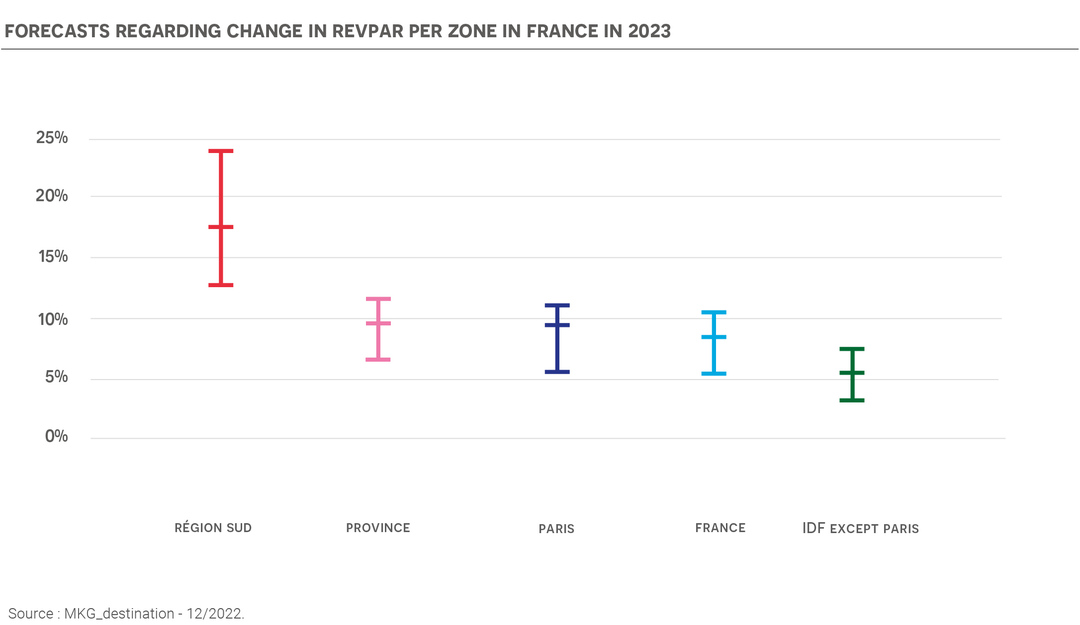 In terms of ranges, the performance of the top segments will still depend to a large extent on the return of long-distance customers, but also on exchange rates, with the euro/dollar parity having allowed, at the end of 2022, the return of long-haul customers to the upscale market. After two years of pandemic, the value of the euro has fallen partly due to the war in Ukraine, inflation, and fears of recession. It has even fallen below the dollar, thus benefitting American tourists who have made a comeback in the French capital and in French "luxury" destinations. 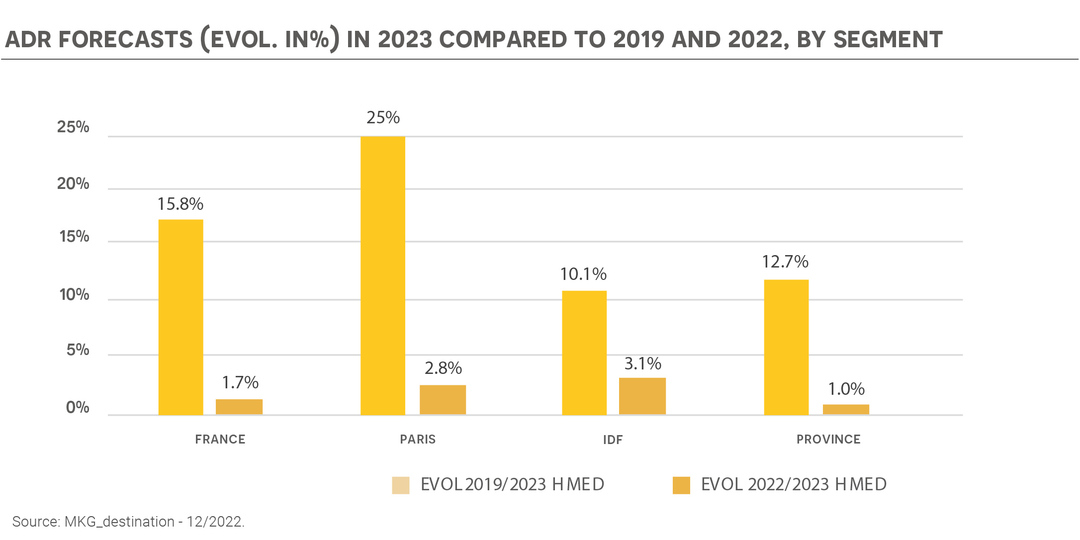 In the most likely median scenario, midscale properties nationwide should see a recovery of close to 10% relative to 2019 (i.e. +3.7 points vs. 2022), while economy ranges could see a 6% recovery, outpaced by the budget segment with nearly 9% RevPAR growth, compared to 2019. 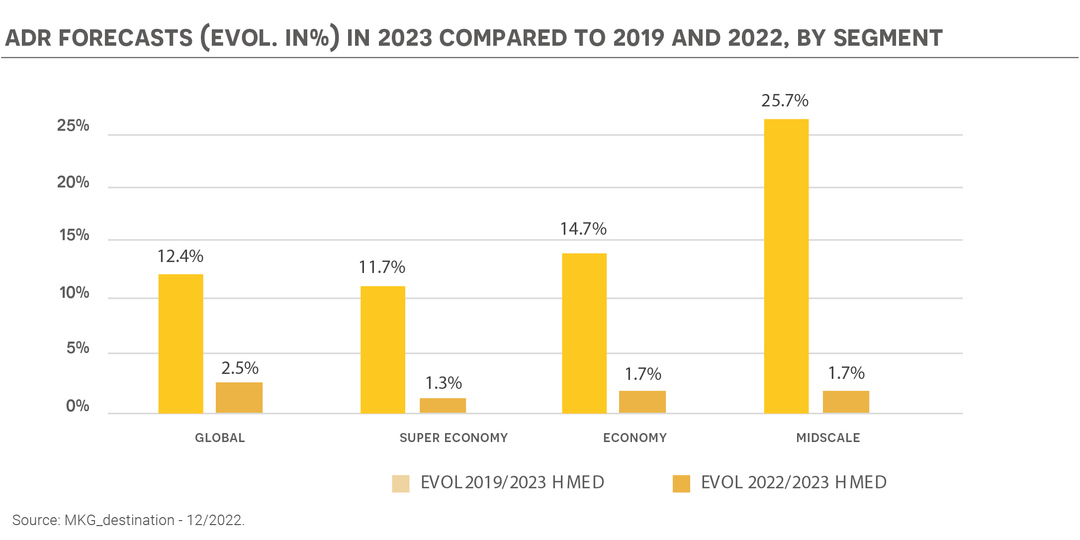 Thus, given the country's economic situation, the median scenario is based on a +15.1% increase in the average daily rates across France vs. 2019, driven by exponential growth in Paris (+24.6%) and more "contained" growth in the provinces which have seen a +11.8% increase.

However, if the ADR explains a large part of the RevPAR growth compared to the pre-crisis period, the levels of frequentation should not be overlooked.

On a global level, the hotel industry can expect, under a median hypothesis, a difference of only -4.2 points in terms of occupancy rates compared to the pre-crisis period, i.e. +1.1 points more than in 2022. While Paris, which has long remained on the fringes of the recovery, manages to recover, the rest of the country is the main driving force, with a difference in OR of less than 3 points, in the median scenario. 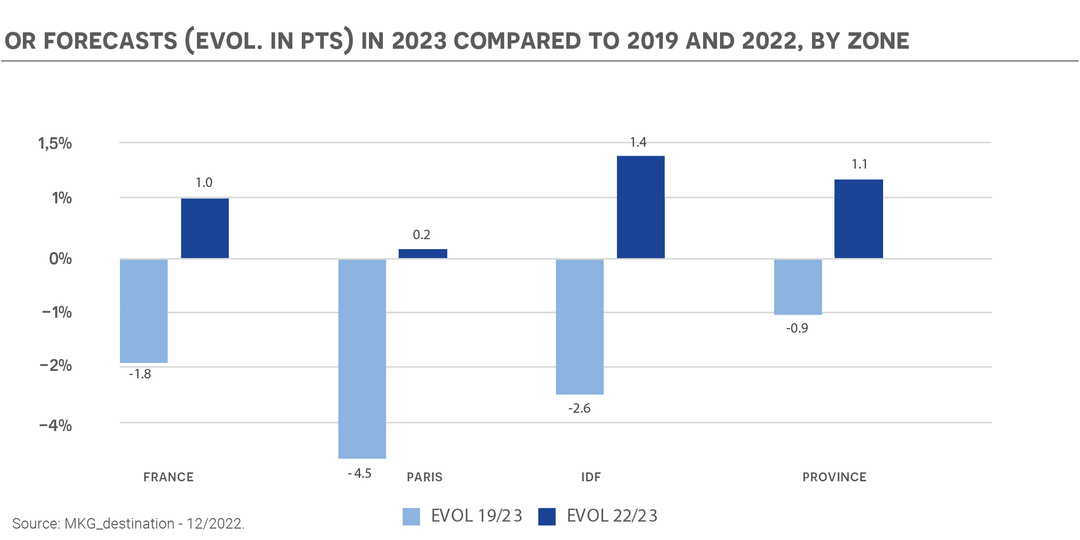 In fact, the "median" scenario remains the most likely. It is based on the prospect of a recovery in hotel activity as soon as spring appears, with a positive peak that could even exceed 2019 levels in certain destinations, particularly coastal destinations, this summer. However, a lower scenario in French can also be envisaged if price increases lead customers to slow down their travel and/or if new epidemic peaks appear. If this were to happen, France could not expect to reach a recovery equivalent to its 2019 levels (-1.7% in terms of RevPAR). 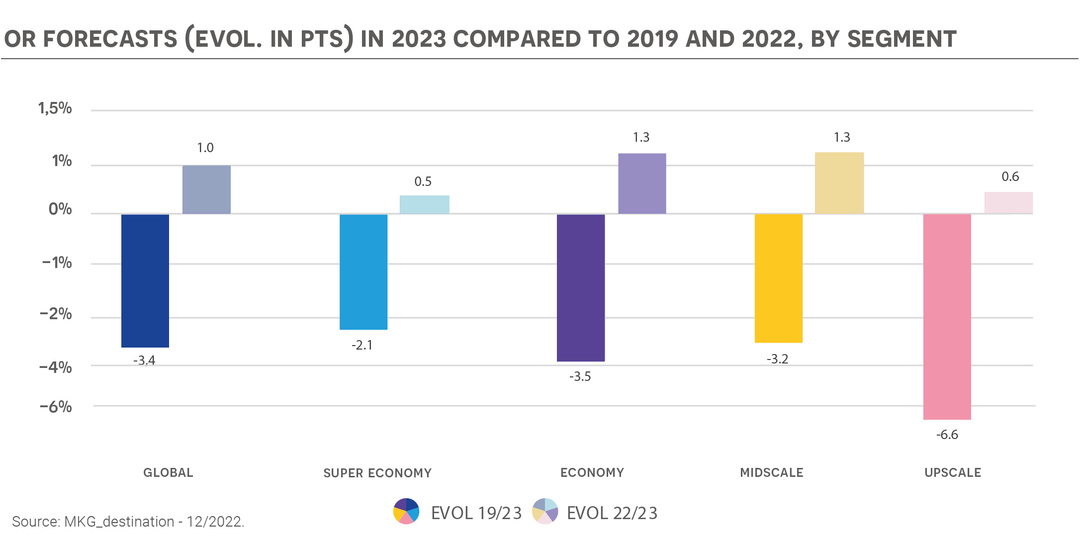 Towards a new booking pattern?

The 2022 "COVID years" were marked by the phenomenon of "last minute" bookings so that clients could adjust to changing health conditions. However, from the end of 2022 onwards, the advance in hotel bookings has clearly increased, offering good prospects, not only in Q1 but for all months of the first half of 2023.

While this advance is most certainly due to the effect of taking bookings further in advance in the current inflationary context (with some clients wishing to protect themselves from future price increases), it allows volumes to be secured, and, therefore, to maintain favourable price dynamics.

Therefore, given the European economic situation, as regards the fundamentals of the hotel business, 2023 should begin the process of the stabilisation of activity on the continent. It will also doubtless produce better results than those recorded in 2019. It remains to be seen whether the hotel industry will be able to withstand the macro-disruptions that are affecting the entire continent over the long term, but for the time being, and despite the energy crisis, the European hotel industry seems to be ready to reignite.

The MKG activity forecasts by year, detailed by range and by country (and for France, by zone: Paris, Ile-de-France, Provence Alpes Côte d’Azur and Province) are available on order. Contact us or order them online on the Hospitality ON Store.