The Chinese empire has a new titanic tourism project. This one should be on one of two artificial islands that are developing along the length of the Hong Kong-Zhuhai-Macau (HKZM) bridge, the longest maritime bridge in the world.

In a very tense context and against a backdrop of demonstrations between Hong Kong citizens and the pro-Chinese government, the 25,000 m² project was the subject of a public call to tender by the HKZM bridge management agency. It will be located on the eastern island, the nearest to Hong Kong, with a surface area of 103,160 m². The creation of a tourist trail all around the latter is already planned.

Inaugurated by Chinese President Xi Jinping last October, the HKZM bridge is one more step towards China's nibbling away at Hong Kong and Macau's special administrative regions. This does not prevent it from being a real success, with ten million passengers already passing through the complex linking several bridges connecting Hong Kong to Macau via Zhuhai, forming a 55 km long axis that would have cost no less than 127 billion yuan (18.8 billion USD). It is estimated to have daily traffic of 44,000 vehicles, boosting trade around the Greater Guangdong-Hong Kong-Macau Bay region. 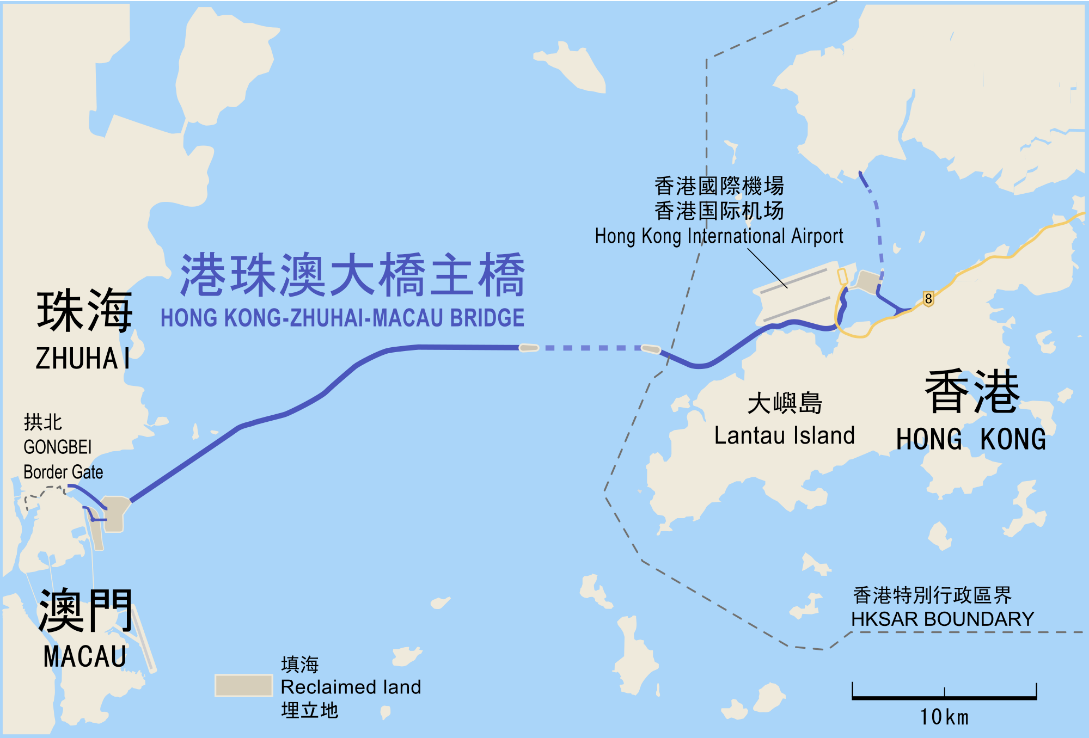 The Grand Bay, in the Pearl River Delta, includes nine cities in the Chinese province of Guangdong with Hong Kong in the east and Macau in the west, for a total of 42 million inhabitants, or more than half of the population of France. The aim of this land link in this maritime zone was also to create an economic alliance to gain in competitiveness on a global scale, as was done around the Bay of San Francisco, or on a smaller scale in France, with the metropolis of Aix-Marseille-Provence, created in 2016.

The bridge will also enable the two major economic centres of Hong Kong and Macau to increase or even pool their visitors in a context where tourism plays a key economic role. The Hong Kong Special Administrative Region of the People's Republic of China in its long form welcomed no fewer than 65.1 million visitors last year, up +11.4% compared to 2017, and +3.2% in the previous year. 51 million came from Mainland China. In 2016, tourism contributed 5% of Hong Kong's GDP and employed 7% of the city's assets. Macau welcomed 35.8 million tourists in 2018 (+9.8%), including 25.3 million from China (+13.8%) and 6.3 million from Hong Kong (+2.6%). Tourism, which is heavily centered around casino and gambling activities, accounted for 6% of its GDP in 2017. Macau's government is targeting 40 million international arrivals by 2025.

Sponsorship and Hospitality - the winning duo?