The preponderance of the supply in mountains and coastal areas is challenged by the development of urban areas and the growth potential in rural areas: 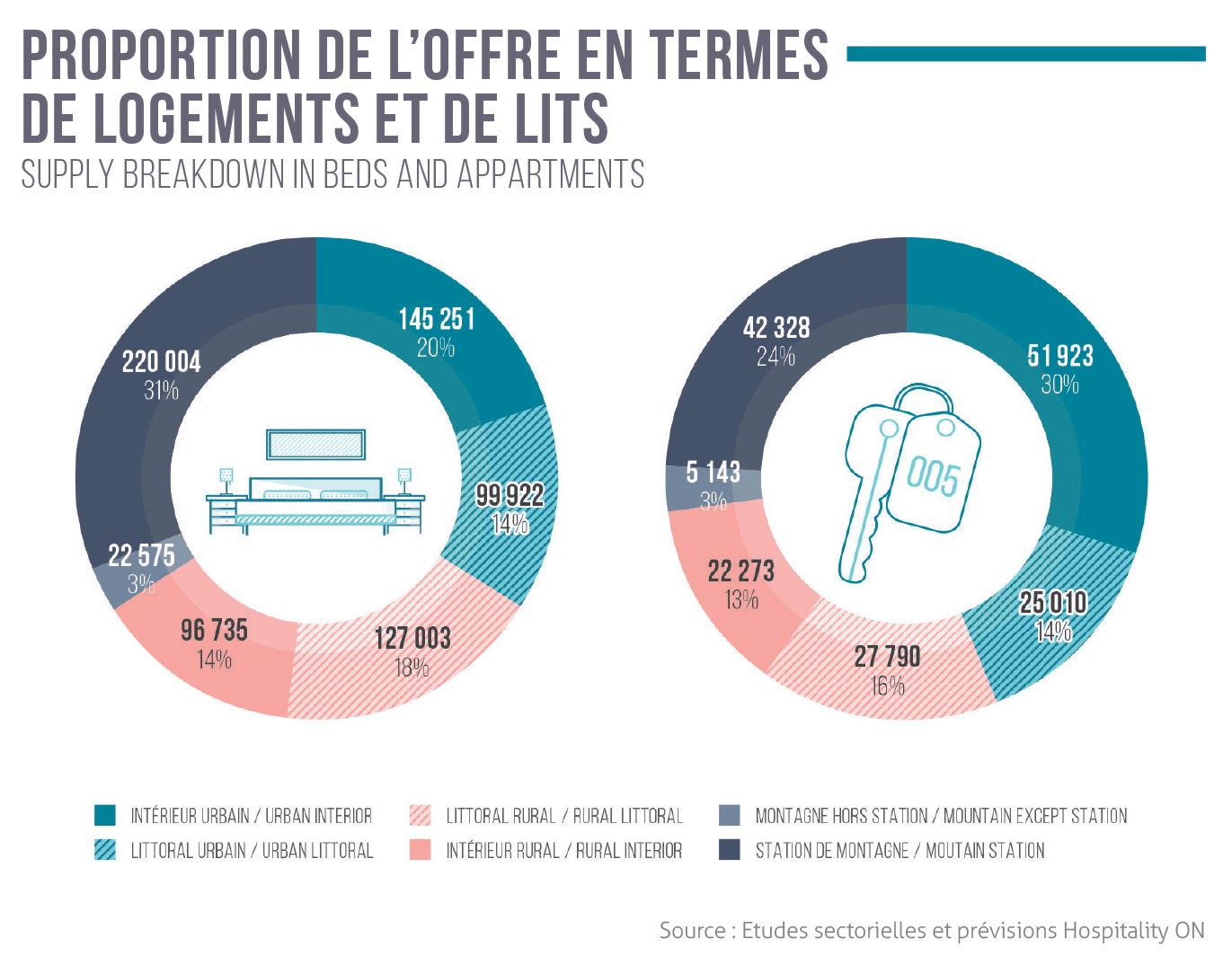 A large number of residences created in cities.

The city is the area where the number of residences grew the most between 2015 and 2017 with the opening of 46 new properties totaling 3,662 lodgings. In terms of number of beds, it is also in the city that the offer has developed the most. However, the Mountains remain an attractive sector with the creation of 8,187 new beds, followed by the coastline with 6,312 beds, while the rural area has only had 6 openings totaling 4,078 beds.
During 2016, the pace of openings accelerated, with 124 new residences added to the inventory for a total of 8,095 beds. The city remains the preferred location for the creation of new residences, but growth in supply is less significant than the previous year (1.3% growth in the number of lodgings between 2015 and 2017 compared to 2.3% growth between 2014 and 2015). 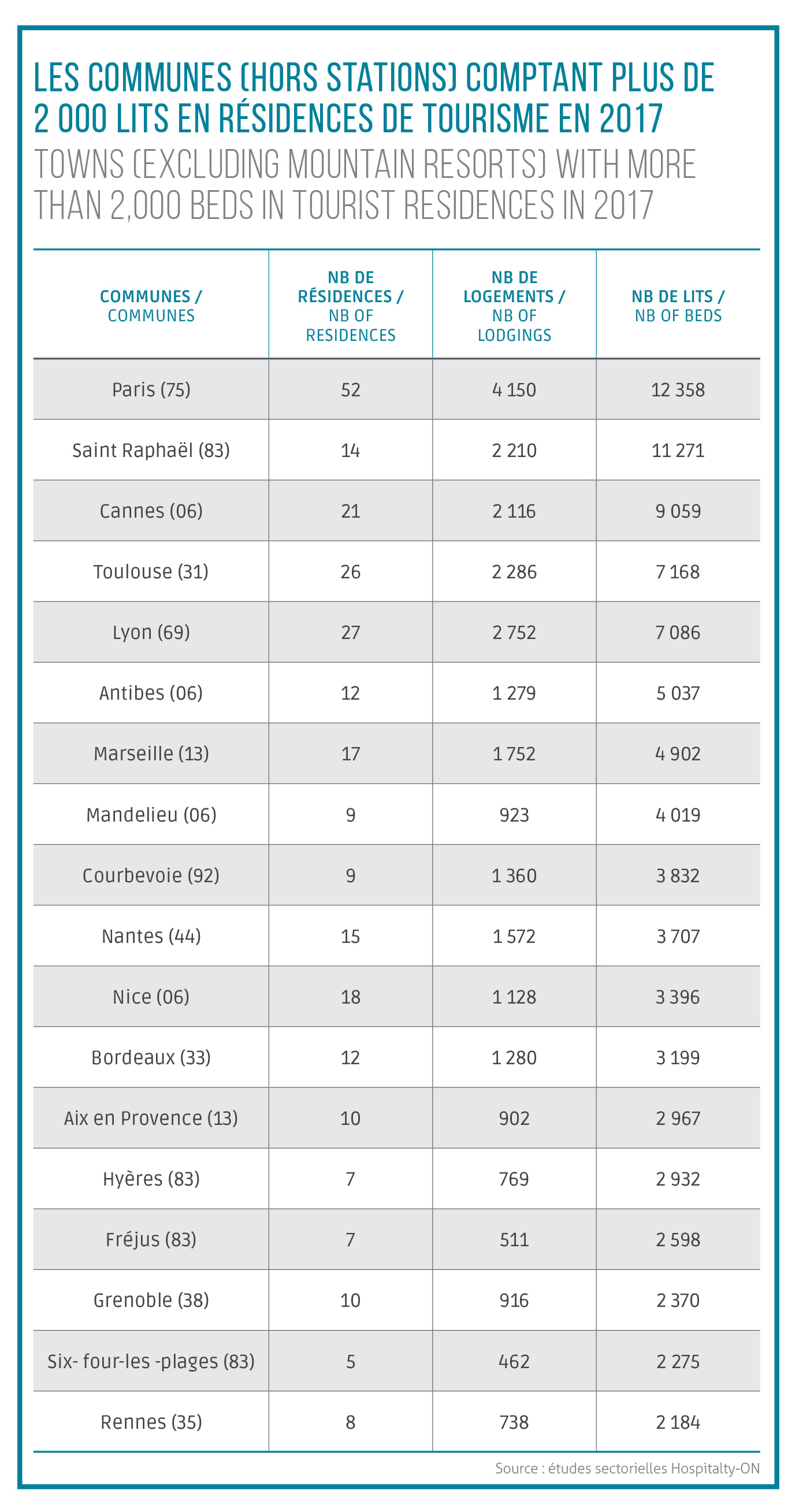 The origins of this urban growth: the development of a business clientele in the major cities and a leisure clientele in coastal cities

On a smaller scale, among the 20 municipalities with the most beds, we find Paris, Saint-Raphaël and Cannes area (with more than 9,000 beds each), Lyon Toulouse, Marseille, Antibes (between 6,000 and 7,500 beds).
Half of the top 20 municipalities with the highest number of beds are coastal cities. Indeed, the Mediterranean metropolises, renowned for their seaside resorts (Saint Raphael, Cannes, Antibes, Mandelieu, Nice, Hyères, Fréjus and Six-four-les-plages) represent 42% of the bed supply in the top 20 cities with the largest number of beds in residences.

The supply, which is mainly aimed at professional customers, continues to grow rapidly. Thus, the municipality of Courbevoie near the La Défense business center, which houses many headquarters, has seen its supply increase by 544 additional beds from 2015 to 2017. From 2015 to 2017, Courbevoie climbed from 12th to 9th city with the most beds in residences. Paris, Toulouse, Lyon, Marseille or Grenoble are also benefiting from growth in business customers and therefore have a significant supply of beds in residences. 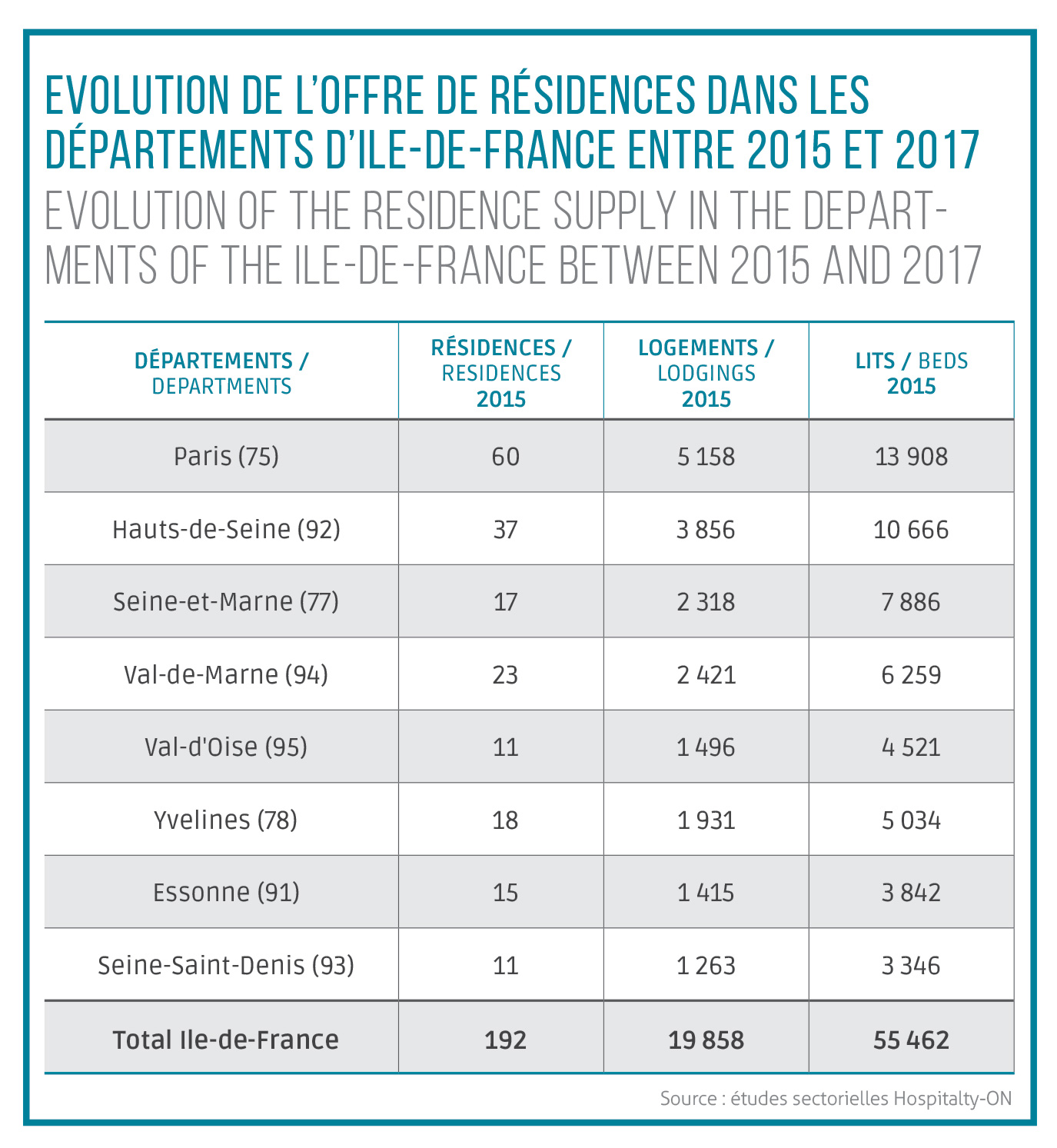 Departments in the Paris Region are experiencing very rapid growth in their fleets. Ile-de-France is one of the most dynamic French regions, with an average growth of 4% in the number of beds between 2015 and 2017. However, growth seems to be declining as it was 7% in 2015. The Yvelines, Essonne and Hauts-de-Seine regions recorded double-digit growth. These departments play on the needs of business customers by offering infrastructures that can host seminars and congresses in a greener environment than in Paris and with a more attractive cost compared to hotels.
Of the 20 French cities with the most openings over the 2015-2017 period, a quarter are cities in the Paris conurbation - Paris, Puteaux, Colombes, Vélizy, Courbevoie - which testifies to the vitality of the tourist residence market in Ile de France. 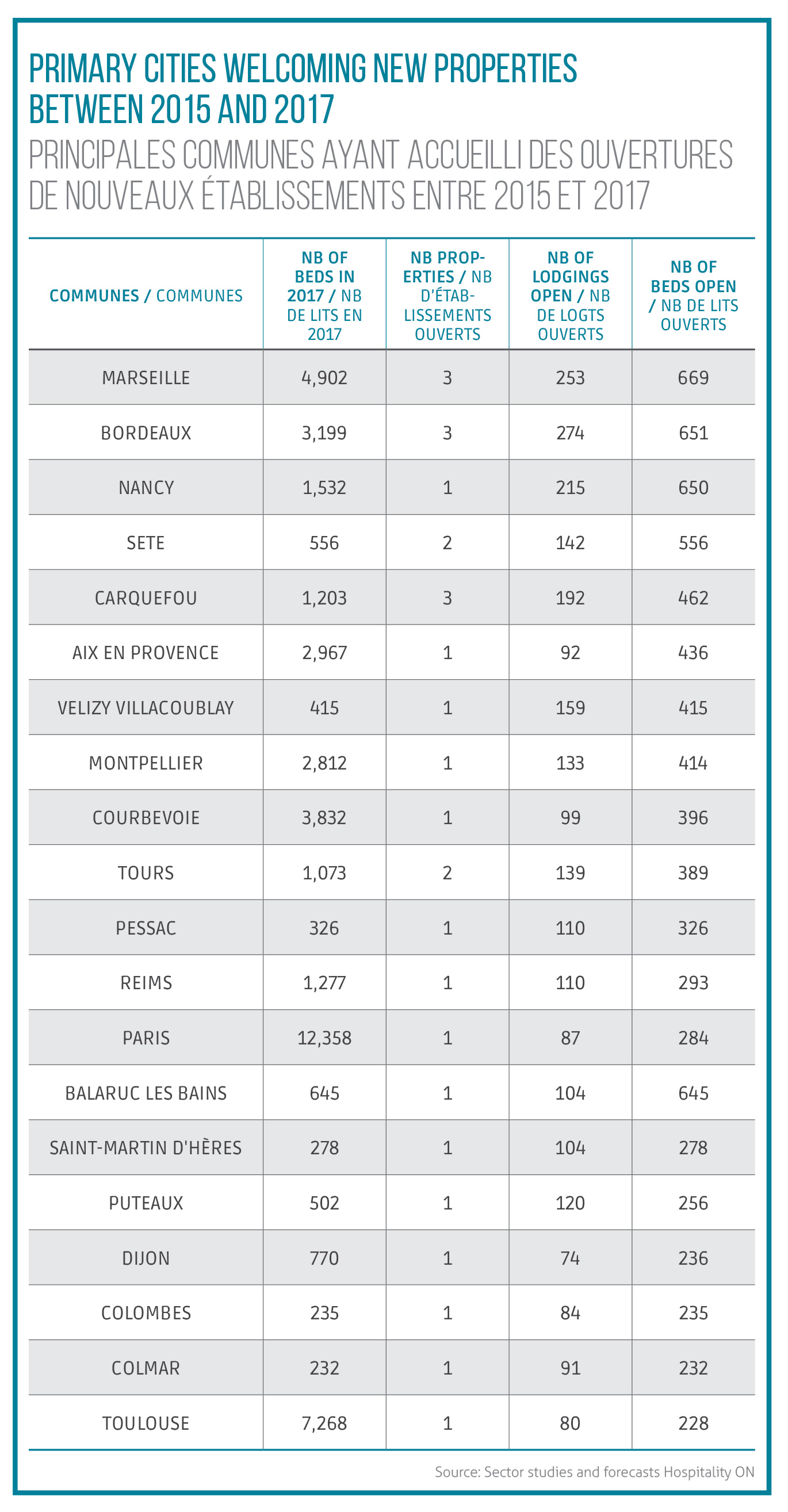 More precisely, while group continue to establish themselves within the major French cities (Marseille, Bordeaux, Paris, Toulouse, Montpellier), a more recent trend shows the opening of residences in cities surrounding major cities. As mentioned above, this is the case in Paris and its suburbs and it also stands true in other metropolitan areas. New openings have taken place in Sète, Balaruc-les-Bains around Montpellier, Pessac on the outskirts of Bordeaux and Aix en Provence near Marseille. With the exception of Aix en Provence, these outlying cities are welcoming their first tourist residences. It can therefore be concluded that there is potential for growth in smaller cities near major cities. 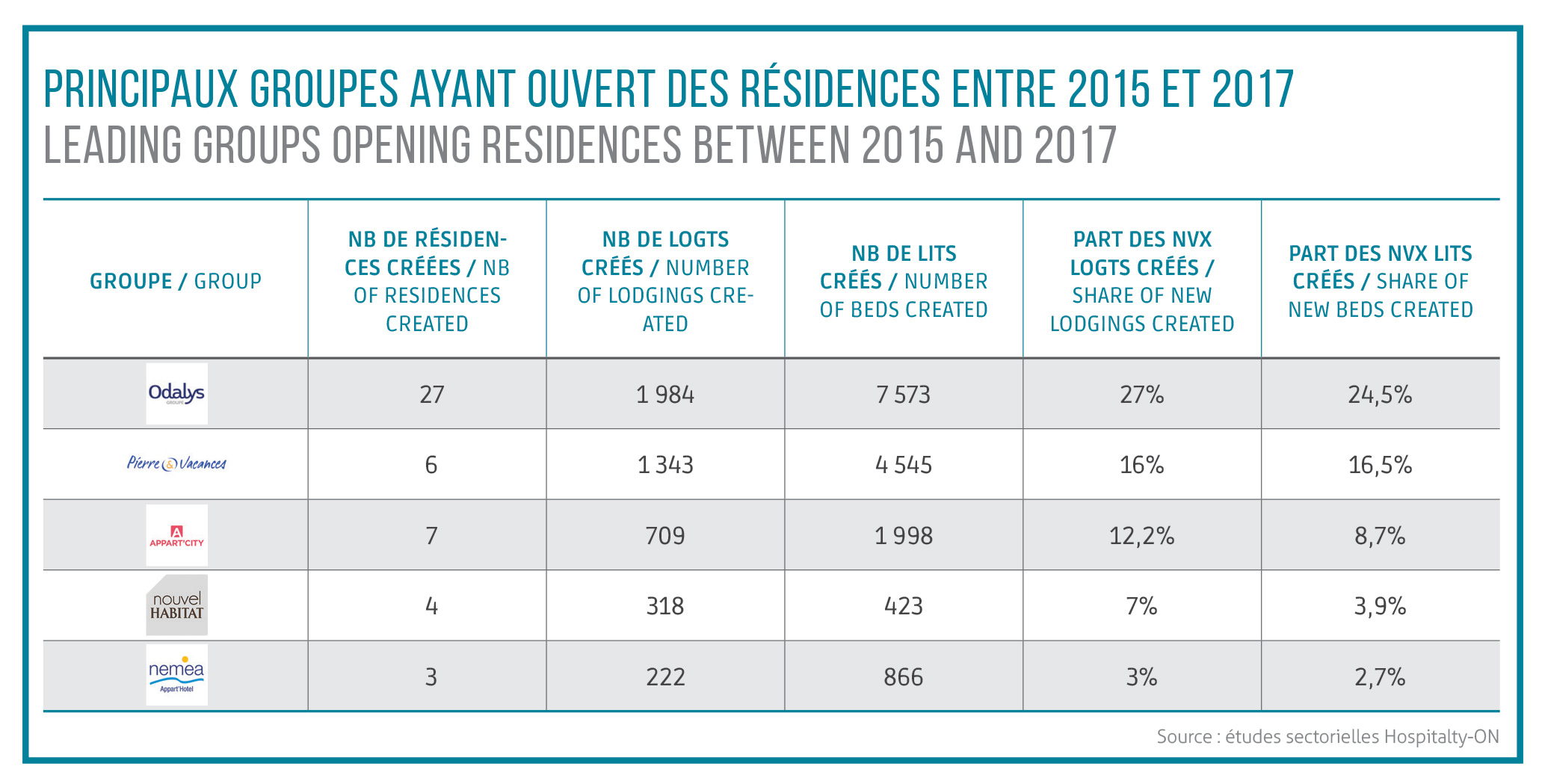 New openings are mainly by chain operators who represent more than 60% of lodgings and beds created over the 2015-2017 period. Odalys is first in the ranking of the number of openings over the 2015-2017 period with 27 residences and 7,573 beds, mainly in coastal towns or mountain resorts. Pierre&Vacances follows with a total of 4,545 beds and 1,343 housing units, and most recently the partial opening of Village Nature in the summer of 2018 (916 units), which will integrate the supply at the end of 2018.

Appartcity is in third place with 6 new homes built; mainly in cities with a population of 100,000 to 500,000. Growth in operators’ supplies is therefore largely in the city. Some residences tend to be more like hotels, with a much smaller number of beds per unit than the rest of the park. Adagio represents an original operation in this respect, since the brand is the result of a joint venture between the Pierre&Vacances-Center Parcs and Accor Hotels Groups. Adagio is therefore a hybrid between residence (the Pierre&Vacances model) and hotel (the Accor Hotels Groups model), and it is particularly suitable for medium and long stays in urban areas for customers who are accustomed to traditional hotels. 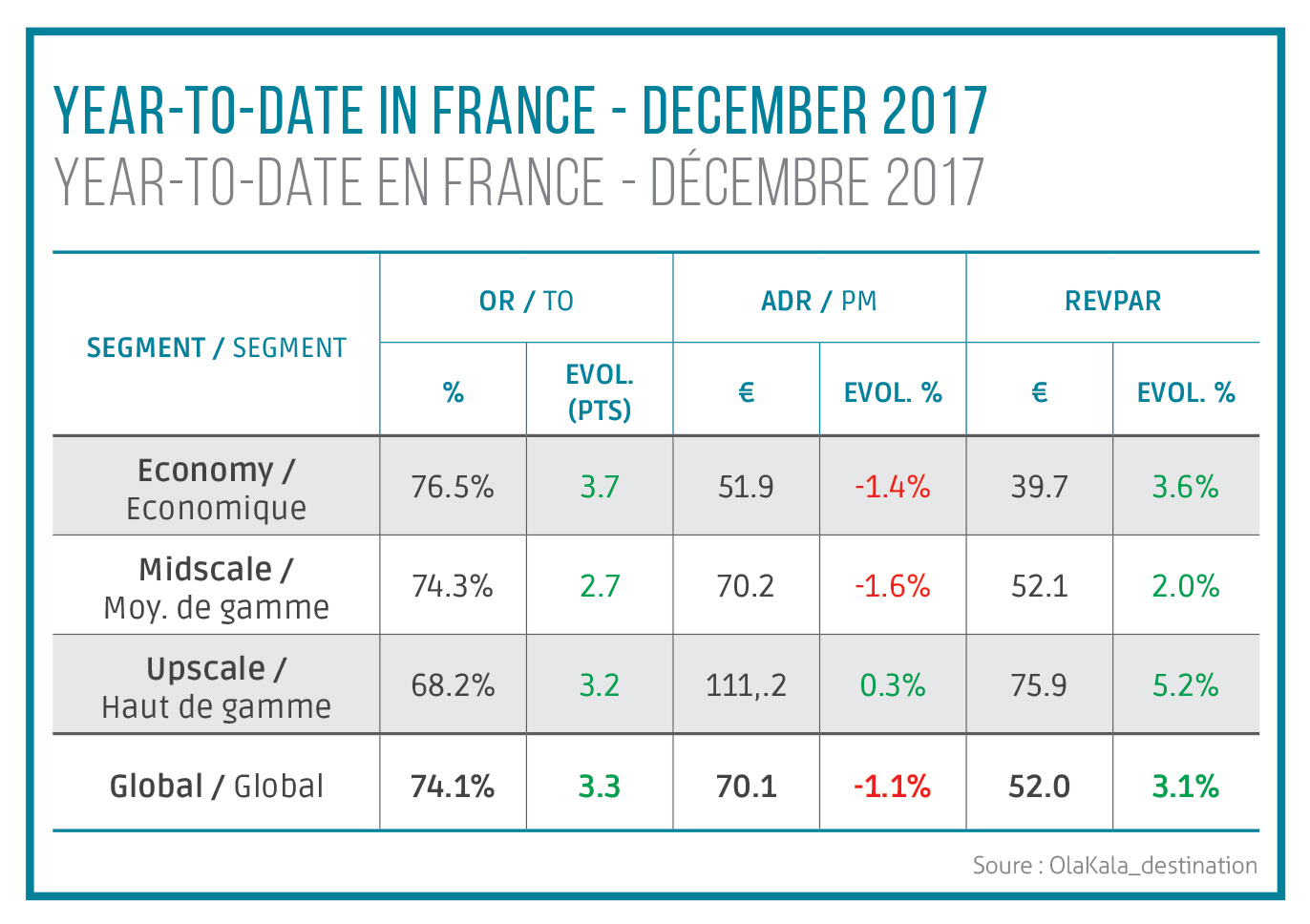 While Odalys is not present in the Paris region, AppartCity and Pierre&Vacances mainly drive competition there. All three are well established in the area around Marseille. As for the Grand Est region, Nouvel Habitat has the majority of its supply there (Troyes, Nancy Reims, etc.), but it is competing with the recent openings of Pierre&Vacances and Appartcity... Finally, around Montpellier, Odalys and Appartcity dominate a major share of the market there and continue to win over the territory. 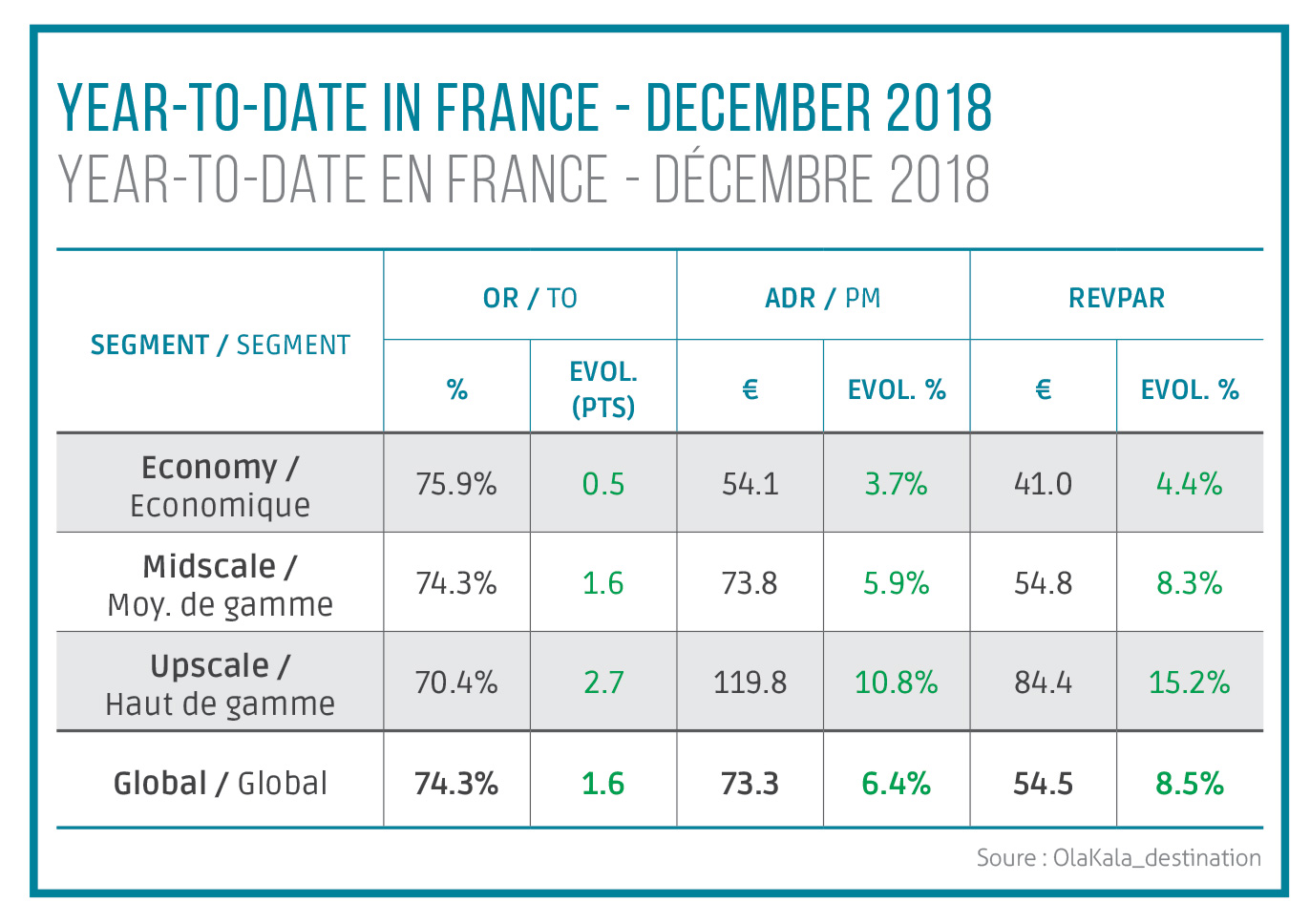 With a RevPAR up by 3.1% across all ranges, the urban residence market signs a year 2017 that ends on a positive note. It is the upscale supply that is driving the RevPAR up with 5.2% growth to reach 75.9€. It may be observed that the occupancy rate is driving indicators into the green rather than the average daily rate which is down slightly on all segments except the upscale that is stagnating at 111.20€ per night.

The improvement is even more flagrant in 2018 with YTD indicators to 31/07/18 that explode with growth in the RevPAR by 8.5% also driven by the high-end properties that show growth in their RevPAR by 15.2% to reach 84.40€ on this segment. After stagnation in average daily rates in 2017, these logically take an upturn as the growth in demand dynamic in 2017 and remains positive in the first 7 months of the year 2018. 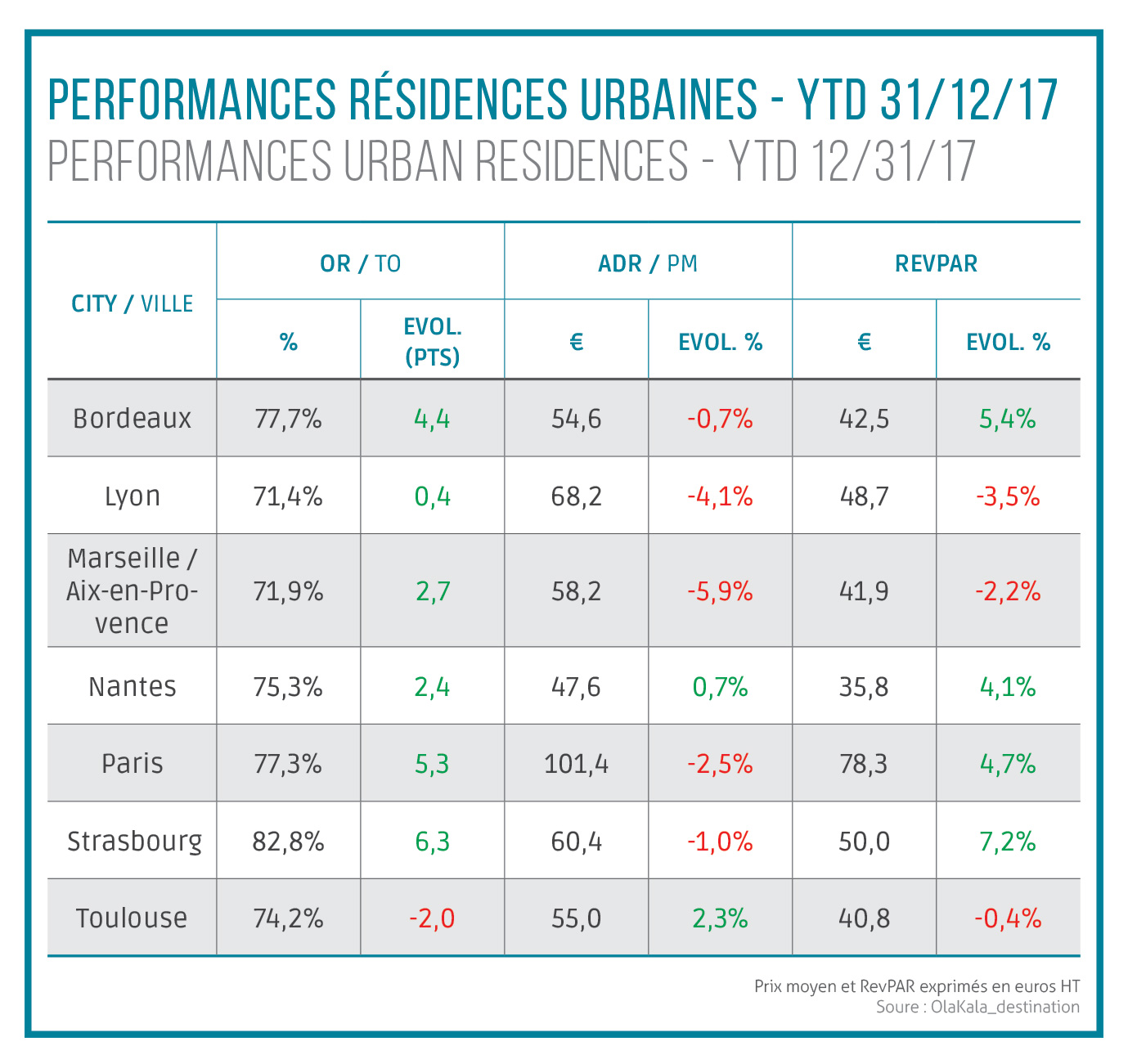 Those urban agglomerations that were doing poorly in 2017 are now seeing all their indicators go back to green, although Lyon still shows a very timid recovery with +0.3% in RevPAR driven by a slight increase in the Occupancy Rate combined with prices maintained by operators due to the market slowdown. 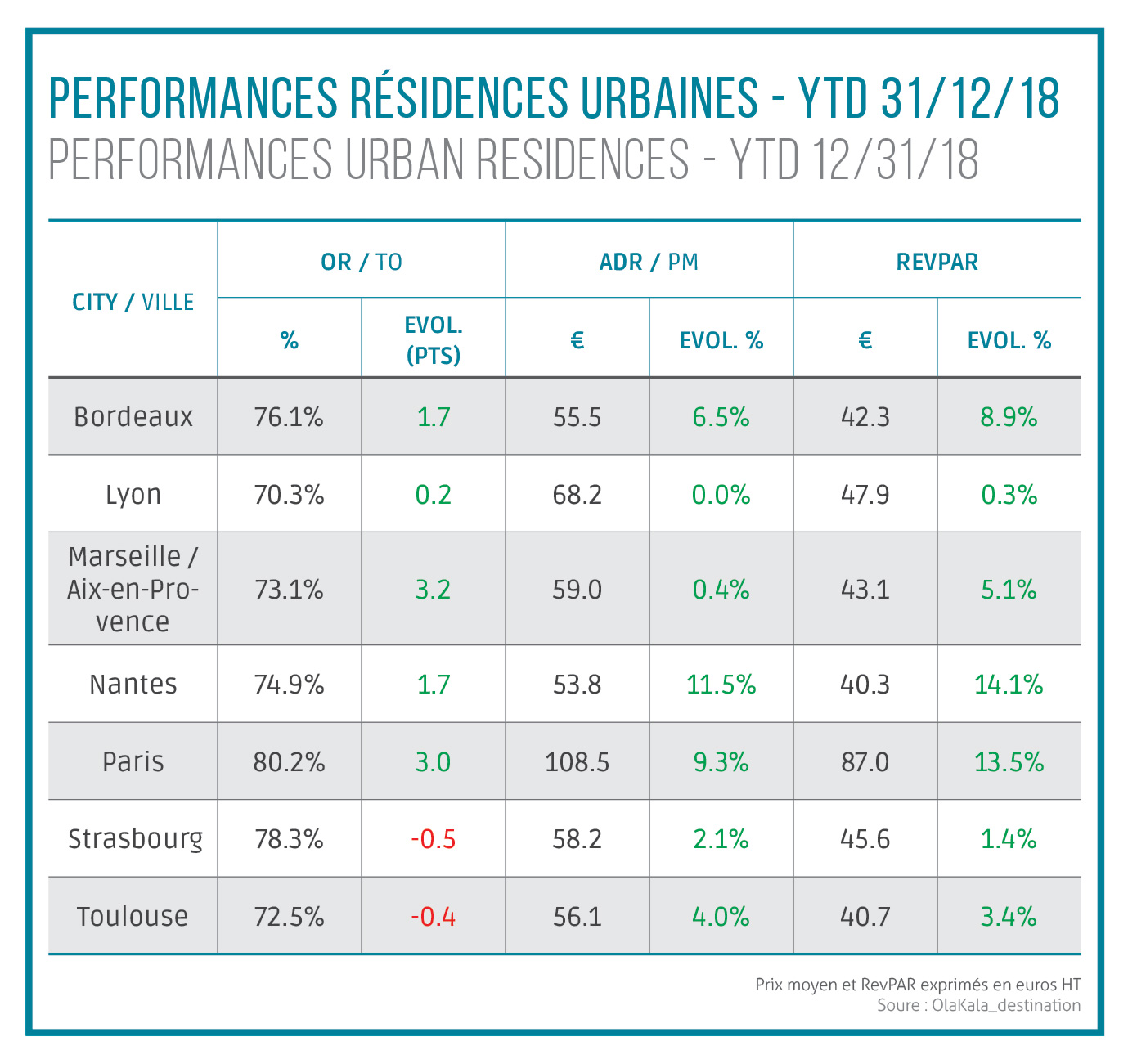 Rotana moves into the Algerian market