European hoteliers had been hoping the pickup in vaccination rates and progressive removal of health restrictions would boost demand this summer, as it did in 2020. Wish granted: hotel activity accelerated (+66.7% in RevPAR compared to 2020 marks), even though it remains well below pre-COVID standards (-37.6% compared to the summer of 2019). The impact of the COVID-19 crisis on the hospitality industry is now ebbing down, but this dynamic does not wipe out the strong disparities between countries and areas.

This summer, vaccinations and health passports have enabled hotels on the continent to host a hefty chunk of their domestic and European clientele. Compared to 2020, performance in 2021 is up in all European countries, not only in terms of Occupancy Rate but also in terms of Average Daily Rate and RevPAR. The Occupancy Rate climbed by 16.8 points from 2020, crossing the symbolic 50% threshold (to 52.4%). Revenue per Available Room reached €53.0, a 66.7% increase from 2020.

However, despite this rebound, performance remains well below pre-Covid levels: over the summer, European hotel revenue per room stood -37,6 below summer 2019 levels.

Summer 2021 : Change in hotel revenue per avaibale room, change in % from the same period in 2019 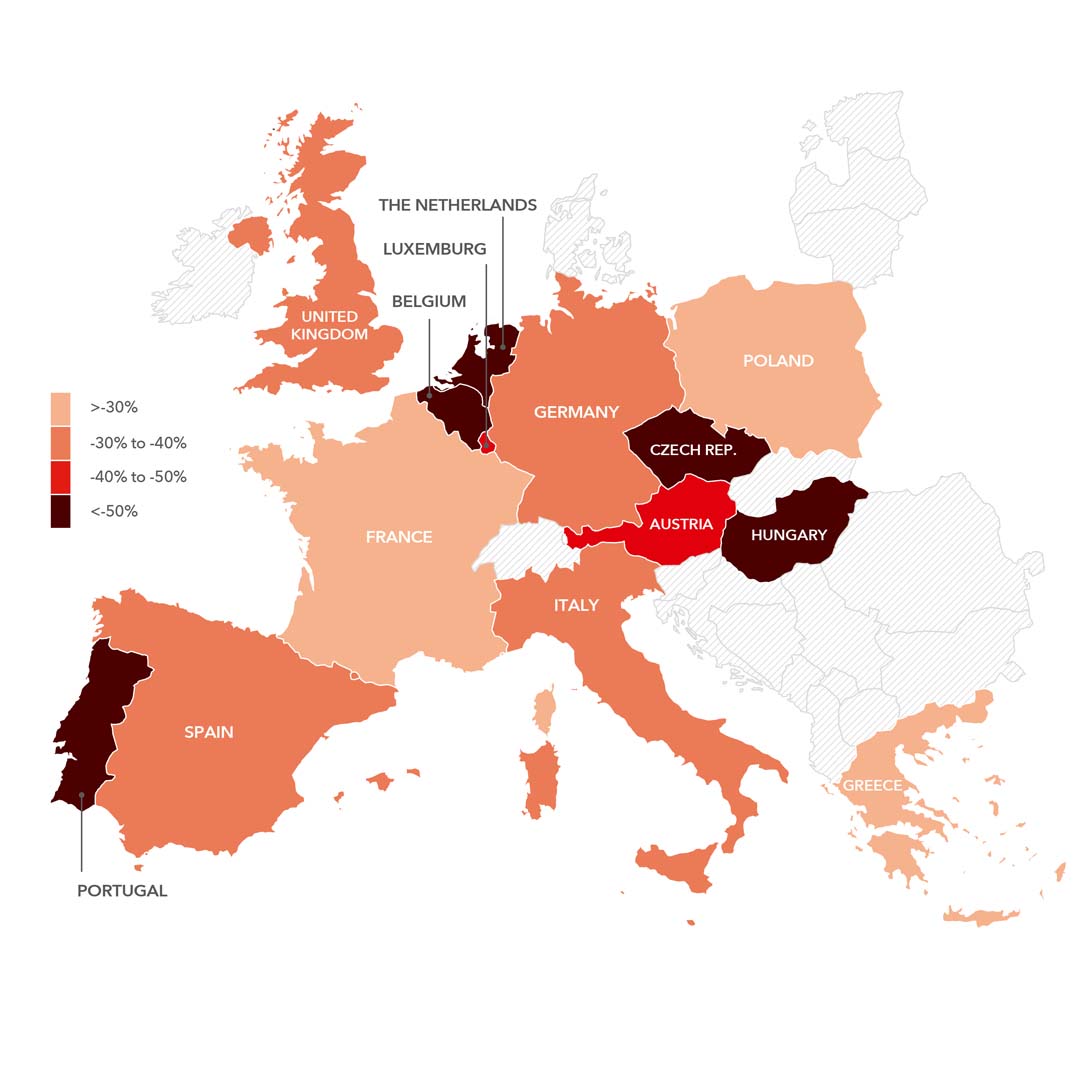 However, all European countries did not experience the same recovery pattern, with RevPAR trends ranging from -22,8% in France to -70,5% in Hungary. There are multiple underlying causes:

Disparities in terms of hotel performance can be observed at the national level but are even stronger within countries. In fact, RevPAR in European seaside hotels this summer reached €96.0 excluding VAT, 70.7% higher than in 2020 and only -12.8% lower than in 2019. On the contrary, over the same period of time, RevPAR in non-seaside areas was € 45.7 excluding VAT, still -38.2% below 2019 levels. Indeed, the pandemic-induced hotel crisis is now affecting inland areas more strongly, as they are more dependent on business tourism. Conversely, coastlines can rely on a leisure clientele now eager to travel and with the purchasing power to do so.

In some countries, the occupancy rate in seaside hotels almost climbed back to pre-crisis levels (-3.1 points in France, -4.4 in Germany and -4.8 in the United Kingdom) and exceeded 80%. In terms of RevPAR, during summer 2021 coastal areas in some countries even beat their pre-COVID levels, with +13.8% in Germany, +12% in the United Kingdom, +7.2% in France and +10% in Poland.

Many clients from the traditional northern European source markets chose to spend the summer by the sea in their own countries, even though many also returned to their usual sunny destinations in the Mediterranean countries. As a result, this strong demand pushed up average prices in resort areas, where the supply is limited.

Urban regions are most penalized by the crisis

More dependent on international and business travellers who have not got back to their pre-crisis levels, the major cities are still the most affected by the health crisis. In Germany for example, Hessen did not so well this summer: their RevPAR levels declined by more than -50%. Spain with Madrid and Barcelona followed the same trend, as did France with the Parisian region lagging well behind the others.

In contrast, in leisure-oriented regions RevPAR levels climbed higher than in 2019. This is the case for some coastal regions, such as the Baltic Sea coastal regions of Schleswig-Holstein in Germany, Bretagne and Pays de la Loire in France, and of Galicia and Asturias in Spain. It is also the case for inland regions with little exposure to international customers, such as Castilla y Leon, Extremadura and Aragon in Spain.

Change in hotel revenue in France, breakdown by region. RevPar change in % from 2019 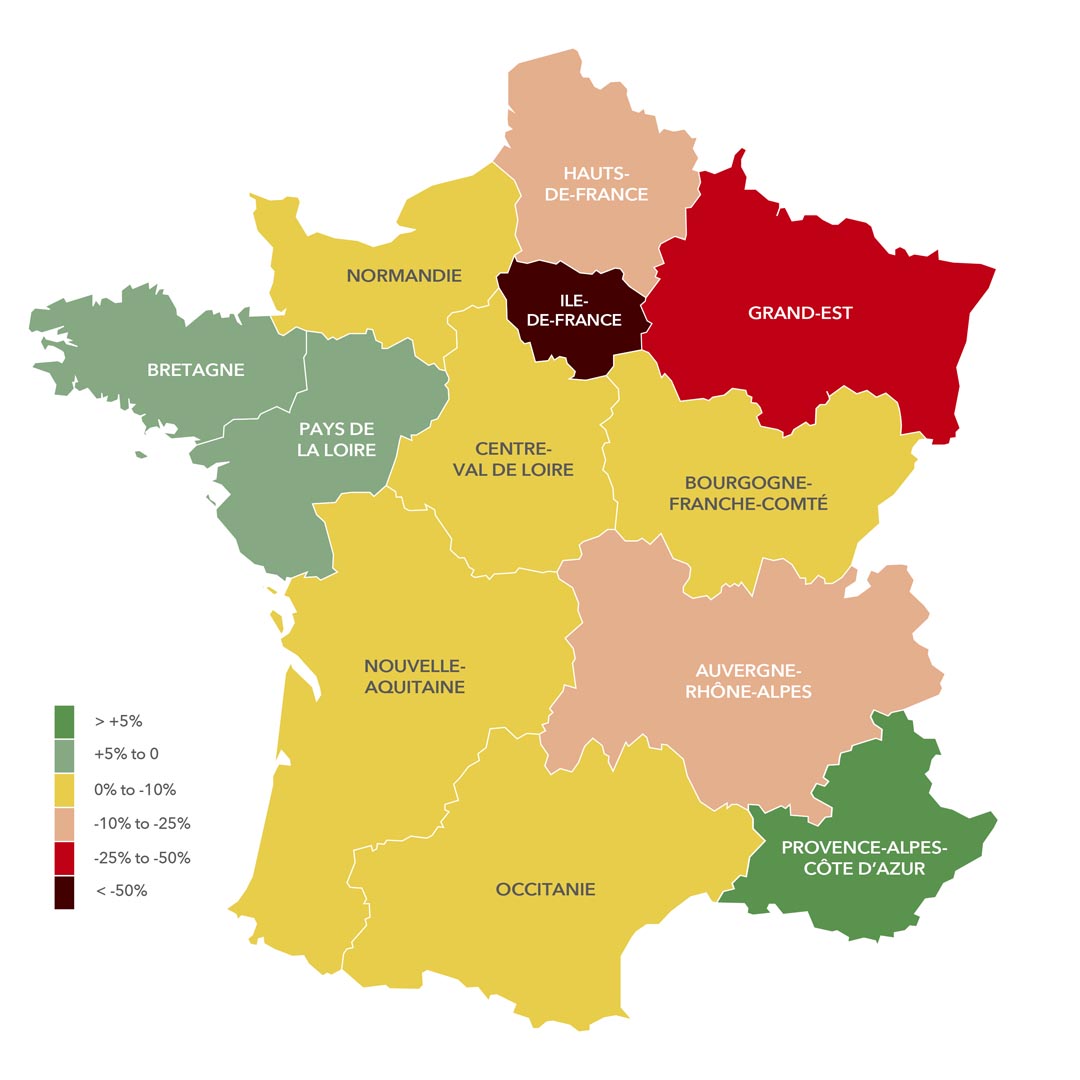 Change in hotel revenue in Germany, breakdown by region. RevPar change in % from 2019 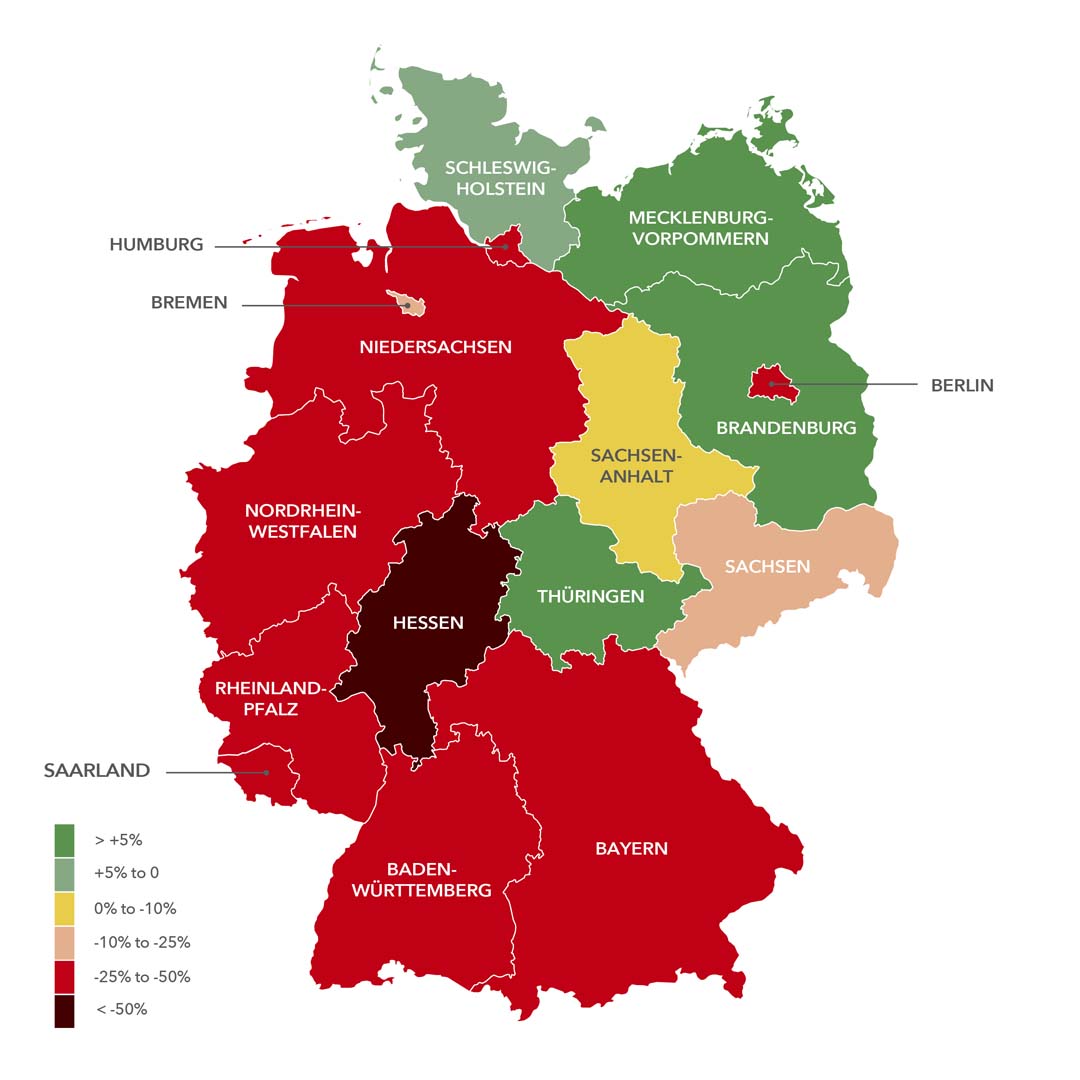 Change in hotel revenue in Spain, breakdown by region. RevPar change in % from 2019 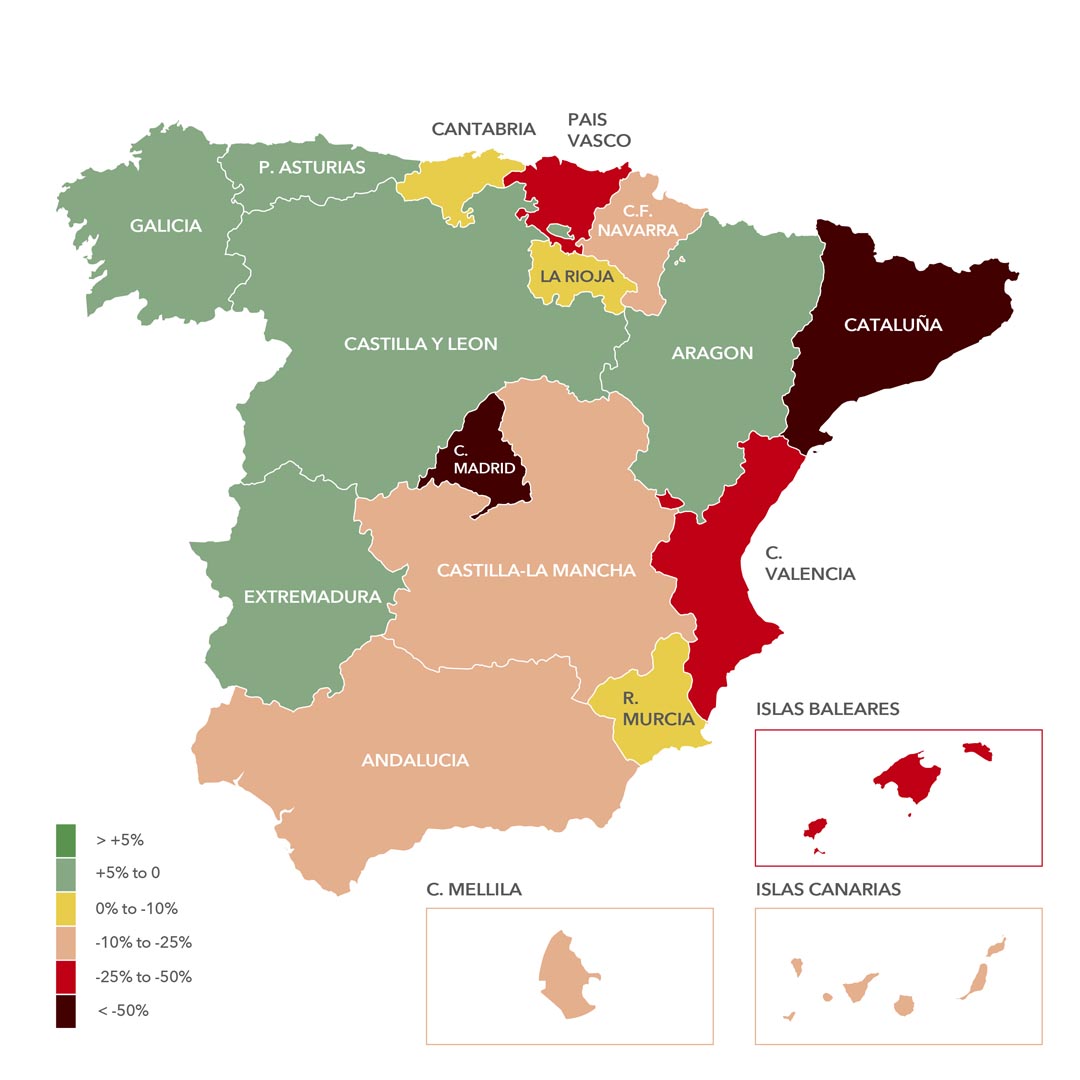 What conclusion, and what next?

Across Europe, summer 2021 has therefore seen a signifi cant improvement in hotel activity, following a diffi cult fi rst semester. Overall, from January 1 to August 31, 2021, (including summer), hotel revenue in Europe fell by between -54,8% and -86,3%, depending on the country, from pre-COVID standards.

Spain, Greece and France, thanks to their solid summer season and the greater weight of this period in their annual revenues, are currently posting the best results in Europe whereas Czech Republic, the Netherlands, Hungary, Belgium and Portugal are still down by more than -75%, i.e. their hotel revenues have been divided by 4 in 2021 compared to pre-crisis marks.

Notwithstanding, the situation is improving everywhere, with declines in activity that rose back above the 70% threshold over the summer. The rebound is even faster in some countries, such as France: the country lost -54,8% of its hotel revenue over the fi rst 8 months of 2021 but cut its losses to -22,8% over the summer and merely -13,9% in August.

Therefore, since the beginning of the epidemic hotel performance in Europe has never been so close to its pre-COVID levels:

"Thanks to European holidaymakers, the summer has brought a welcome sunray to hotels on the continent, especially those on the seaside. But the year remains difficult and the return from the summer holidays will be another moment of truth, as 10 months out of 12 the hotel industry remains primarily dependent on business clients and business events, two key segments that so far remain below their pre-COVID levels of activity."