The health crisis did not severely affect the hotel room supply of the main groups. They continued their conquest of the old continent in 2020 and protected their position in some cases. The growth of the leaders and the rise of some challengers marked the chain supply’s resilience. The French B&B Hotels has entered the continental Top 10, while the Chinese are gaining even more ground on the European market with the arrival of the Huazhu group in the Top 20.

The French group Accor remains solidly number one in Europe despite the global COVID-19 pandemic slowing down its growth (+1% compared to +2.6% last year). The ibis megabrand drove Its development. The megabrand recorded a net gain of 20 hotels and consolidated its position as Europe’s leading hotel brand with over 150,000 rooms (+0.9%). Novotel also made progress (+0.8%) and climbed up to 7th place in the ranking of chains. Moreover, upmarket brands such as Pullman, Mövenpick (+334 rooms), and Fairmont (+170 rooms) also contributed to the group’s growth this year, as did alternative brands such as Greet, which opened three new units, and Tribe, which was launched this year. Accor wants to take advantage of the rebound from the health crisis by focusing on the “lifestyle” segment. The announcement at the end of 2020 of exclusive negotiations with Ennismore and the complete integration of sbe’s brands go in this direction.

The Chinese company Jin Jiang remains stable with weak growth in its portfolio (+0.1%, i.e., ten additional hotels), which widens the gap with the French giant. However, this overall stability masks the significant development of its new brands (Kyriad Direct, Radisson Collection, Radisson Individuals, etc.), which has sometimes come in tandem with the decline of its traditional brands Golden Tulip, Park Plaza, and Campanile. Indeed, the young Kyriad Direct brand opened 24 properties in a year. In contrast, the new Radisson Individuals brand, aimed at independent hotels and local and regional chains, was launched at the end of 2020. Finally, determined to challenge the French leader, Jin Jiang has announced its imminent entry into the long-stay residences market through Louvre Hotels Group and its upcoming supply of Tulip Residences.

IHG maintains its place in the ranking without significant changes (+0.2%) after experiencing last year a growth spurt driven by voco and Indigo. This slight growth is explained by the opening of the Kimpton Clocktower in Manchester (+270 rooms) and the Kimpton Vividora in Barcelona (+156 rooms), thus affirming the group’s positioning in the luxury segment. An additional property. is planned to be launched soon in Paris. Conversely, InterContinental is experiencing a decline in supply due to closures for renovation. The group also strengthened its position thanks to the growth of the traditional Holiday Inn family (net balance of +1.2% / + 6 hotels). Lastly, Europe has succeeded in attracting the new contemporary brand, voco, which will make its debut in the Netherlands and Italy in 2021, and in Germany in 2022. 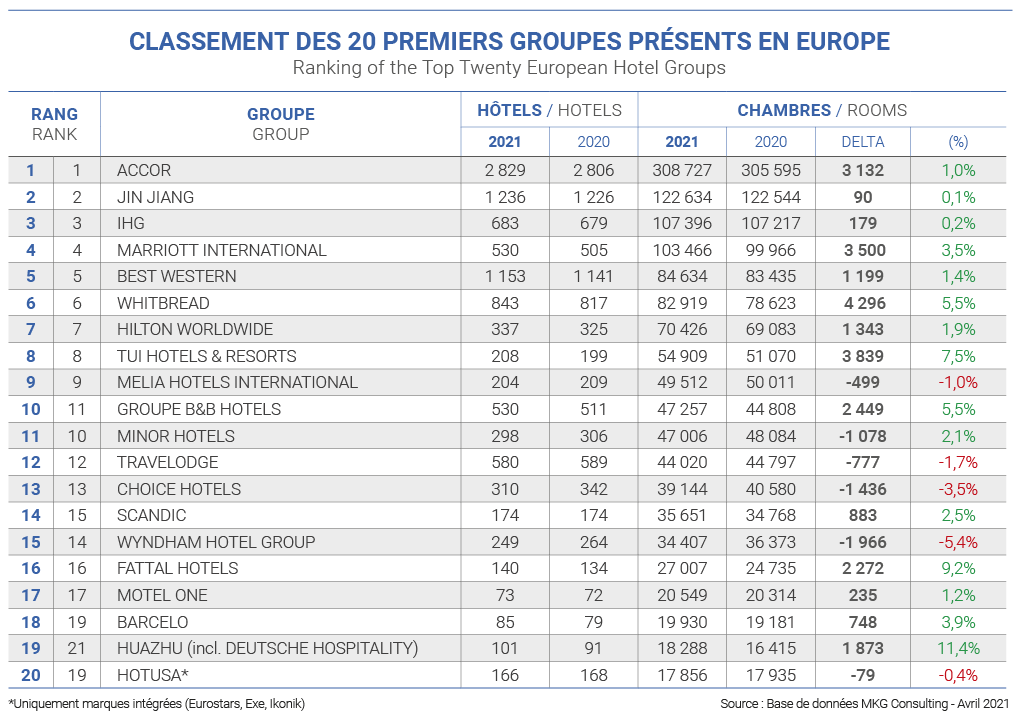 The world’s leading hotel group, Marriott International, continues to make its mark in Europe with solid growth of +3.5%, in line with the trend of the previous year. The group gained 25 addresses in Europe during the year. It passed the symbolic threshold of 100,000 rooms in Europe thanks to the strong growth of the Moxy and Tribute Portfolio brands (+24.3% and +25.9%, respectively). With more than 8,400 rooms, Moxy is at the doorstep of the Top 50 hotel chains in Europe and could soon enter the Top 50. AC Hotels (+4%), Courtyard (+3.7%), Autograph Collection (+5.2%), Residence Inn (+6.6%), Aloft (+9.1%) and Four Points (+10.7%) are also driving the group’s growth. Conversely, the more traditional upmarket brands Marriott (-1.7%) and Sheraton (-3%) are losing ground.

In 2021, Best Western maintains its position in the European Top 5 with a somewhat steady pace of growth (+1.4% against +1.8% last year). However, the group’s traditional brand, Best Western, is losing ground (-831 rooms) to make room for more modern brands, such as Sure (+31%) and Aiden (+72.6%). By broadening its positioning, Best Western offers new opportunities to its members by anchoring itself in the economy segment while moving upmarket.

Despite the health crisis, the British group Whitbread continues to move strongly ahead. Its flagship brand Premier Inn has recorded a net gain of 25 hotels, i.e., an increase of 5.5% in the number of rooms. This expansion enabled it to become the number two hotel chain in Europe. It is worth noting that this growth was mainly driven by the British company’s strong surge in the German market rather than by the expansion in its domestic market (+1.7%). In the former, it gained 18 hotels and more than 3,000 rooms in a few months, thanks to its acquisition of the Foremost portfolio. Finally, the group’s expansion was consolidated by the launch of the first 138-room ZIP unit in Cardiff, an addition to its portfolio of brands.

In 2019, TUI Hotels & Resorts experienced a strong rebound in its portfolio (+22.3%), which enabled a return to the top 10 hotel groups in Europe. Nevertheless, in 2020, the German company recorded an evident slowdown in its growth. Yet, it also managed to accomplish one of the best progressions in the Top 20 (+7.5%) thanks to, among other factors, two new Robinson units in Cyprus and Greece. In 2019, the group moved to capitalize on a single brand. After reorganizing its hotel brands, the group removed TUI Sensimar and TUI Family Life in the summer of 2020 to create TUI Blue for Two, TUI Blue for All and TUI Blue for Families. At the heart of its strategy for 2022, this action aims to strengthen the growth of the group’s hotel business, whose finances and tour operator activities were hit hard by the COVID-19 crisis.

The French group B&B Hotels has moved up one place in the rankings and has entered the European Top 10 with a remarkable growth of 5.5%. Indeed, the health crisis has not affected the group’s determination to continue its very rapid development in Europe. In particular, it is expanding in Germany, where it has grown by 7.3%, gaining over 1,000 rooms. Its hotel chain has also relied on its new urban concept and developments in the digital field to support its growth.

This rise to 10th place came at the expense of Minor Hotel Group. The Thai group, which entered the world’s top 20 in 2019 after solid growth in recent years, record only a slight drop in Europe (-2.2%), explained by a reduction in the capacity of the traditional brand of its subsidiary NH Hotels. Nevertheless, this slight decrease was partly offset by the deployment of its luxury brand Anantara, which is now present in Portugal, Spain, Ireland, and soon in Italy, Hungary and France thanks to a recent agreement with Covivio Hotels.

Travelodge recorded a slight decline (1-7%), as did Choice Hotels (-3.5%), which fell sharply in France, and Wyndham, which recorded the most significant drop in the top 20 (-5.4%). The group was affected by a sharp decline of its Tryp brand, which lost nearly 2,500 rooms in Europe, and a downswing of Days Inn, which fell in the UK.

Wyndham was overtaken by Scandic, which climbed to 13th place among the hotel groups in the European Union and the United Kingdom, and saw its room supply grow by 2.5%.

Fattals Hotels has established itself as one of the most dynamic hotel operators in Europe this year, with a remarkable growth of 9.2%. The group has developed its supply through its NYX Hotels brand with, for example, the opening of the NYX Hotel Warsaw or the NYX Hotel London Holborn (+544 rooms in total). The Leonardo brand is also growing rapidly with the acquisition of three Grange Hotels in London and four openings in Germany and Italy, not to mention the rebranding of various Apollo units. Between now and 2022, the group plans to open many new hotels, particularly in the United Kingdom, Ireland, and Germany, but also in southern Europe.

China’s Huazhu Group is on a meteoric ise with room growth of 11.4%, putting the group in the top 20 European hotel groups for the first time. The Chinese group’s entry into Europe was achieved by acquiring Deutsche Hospitality Group in 2019 and thanks to the recent openings of several Intercity hotels in Germany and Hungary. The Zleep brand, which is conquering Denmark and Germany, contributes to this significant growth. Huazhu does not intend to stop there and plans to open 27 new hotels in Europe by the end of 2024.

Finally, The Originals leaves the European Top 20 in 2021 with a significant drop of almost 13%, accentuating the significant decline observed last year.

In the hotel chain ranking, ibis still dominates the market but is now followed by Premier Inn, which overtakes Best Western as the second largest hotel brand. B&B Hotels also managed to move up a step in the chain ranking and became number six, ahead of Novotel, at seventh place, which moved up two ranks. Finally, Leonardo Hotels moved up five places. It entered the top 20 thanks to record growth in its portfolio (+18.6%, the highest increase in the Top 50). Among other notable movements, Hampton by Hilton moves up from the 37th to 29th place thanks to double-digit growth (+14.3%). Hyatt (+10.2%) moves up from the 44th to 35th place amongst brands in the European continent.

On the doorstep of the Top 50, the race is also accelerating. Moxy (+24,3%) has moved up to 52nd place after gaining 13 places between 2020 and 2021. Huazhu’s Intercity hotels developed at full speed (+17.7%) and moved up ten places in the ranking (54th). Finally, the Best Western group continues to reinvent itself with its new Sure brand, which has recorded 31% growth and moved up to 55th place, a gain of 16 places compared to 2020. 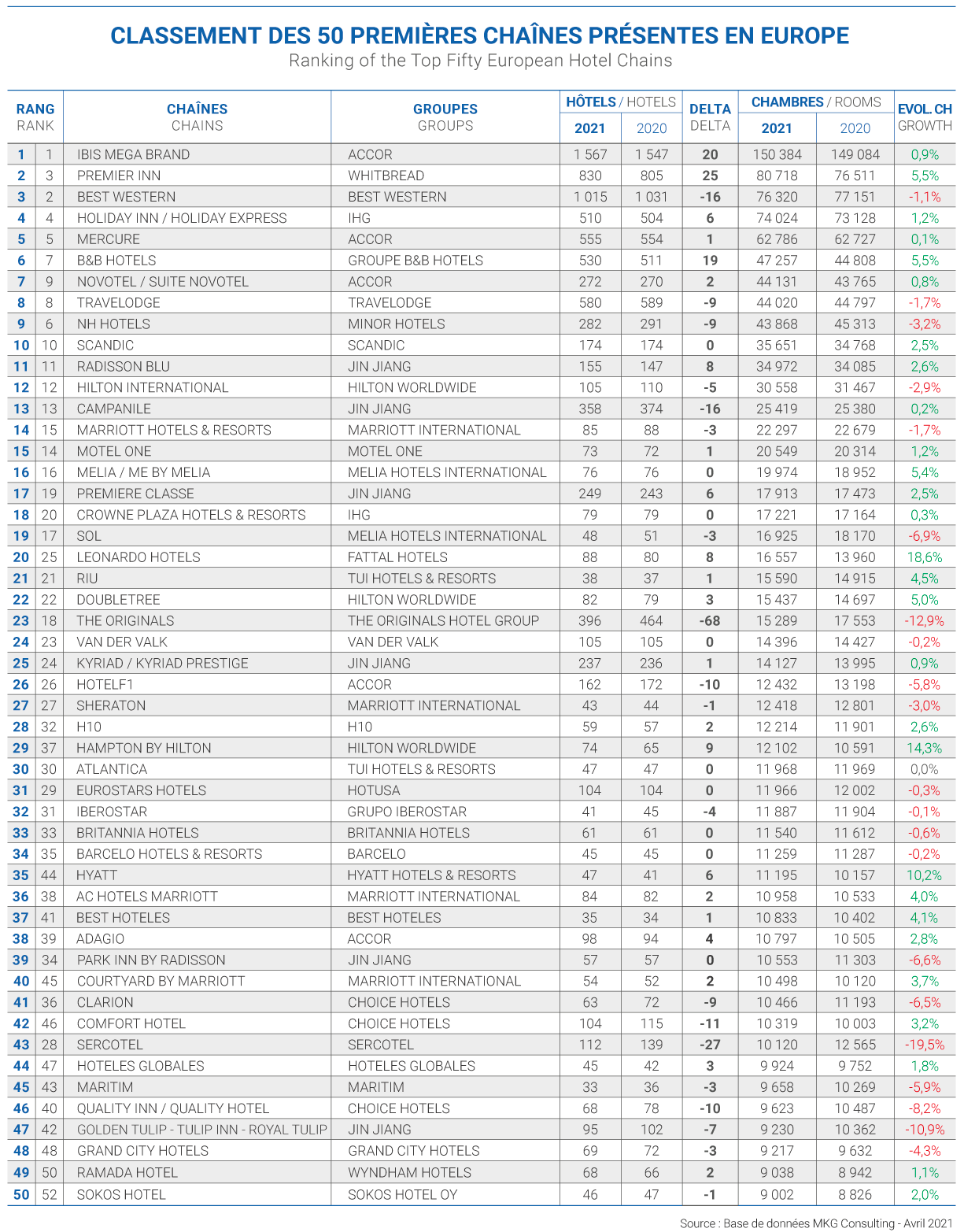