Sofitel renewed its brand identity and communication. In its quest for global transformation, the brand has launched into all new channels such as music, events and art, with an underlying theme: "Live The French Way".

This announcement is perfectly in keeping with Accor's new slogan: "Live, Work, Play". A new example of the group's strategy to reposition its historic brand to offer the updated version of the hotel industry, augmented hospitality.Ibis red properties were updated first. The latter entirely revised their visual identity by diversifying style, but also, and above all, an ouverture to other activities: music to begin, with concerts and a partnership with Spotify. Behind this marketing operation marketing hides a clear strategic goal: to be among the "top 100 most influential brands" (Franck Gervais, CEO Accor Europe).

As for Accor's luxury brand, the choice of theme was based on the brand's French roots. Sofitel thus launched an entire communication campaign around the French Art de Vivre, inviting its guests to experience it. Now Sofitel lives for only four words: #LiveTheFrenchWay. Steven Taylor, Chief Marketing Officer at Accor, explains: "The goal of "Live the French Way" is to strengthen Sofitel's positioning in the luxury segment and exploit its own strengths, while differentiating itself from its competitors and giving it a sense of modernity". The advertising campaign was launched last March, during Paris Fashion Week (25 February - 5 March 2019), with the voice of Clara Luciani, a famous French pop singer, as musical accompaniment. This is further proof that the hotelier is embarking on new channels, in this case fashion and music. 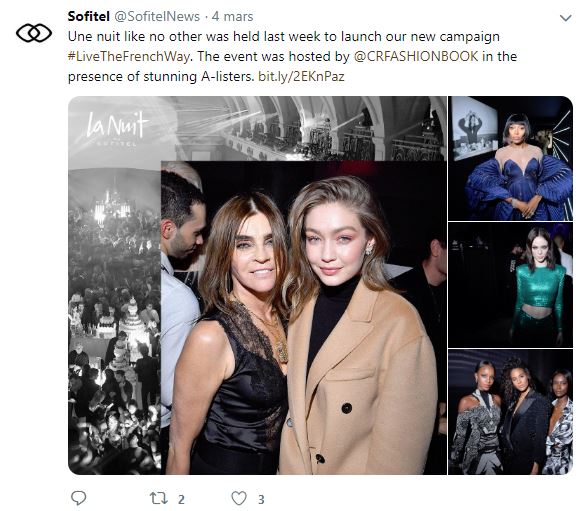 But the innovation does not stop there. The brand is already planning a cohort of typically French events, including the grape harvest with Sofitel Wine Days and the music festival, which will punctuate the year to stay in touch with their customers who are eager to learn about French culture. Cultural events will also be held, such as the Sofitel Kuala Lumpur Damansara from 21 March to 22 May: an art exhibition on the theme of cultural diversity in collaboration with contemporary artist Voon Kim Cheong. Finally, nighttime operations have been heralding this transformation of the brand for the past three years, with "La Nuit by Sofitel", a concept launched during the International Film Festival in Marrakech in December 2016.