Between major events, changes in vacationers' behaviour and heatwaves, a look at the trendy destinations of this first month of school holidays in France. (2/3)

In addition to the former Rhône Alpes administrative region, other destinations have been directly affected by the crossing of this epic cycling route (the itinerary with dates is shown in the image below). First the former Auvergne region, where the OR gained +5.8 pts, but also the Easternmost region, where the RevPAR increased by +8.40%, and Occitania, where the OR maintained positive growth by +1 point, while its ADR slumped (-0.80%), although this did not stop its RevPAR from levelling out at +0.60%. 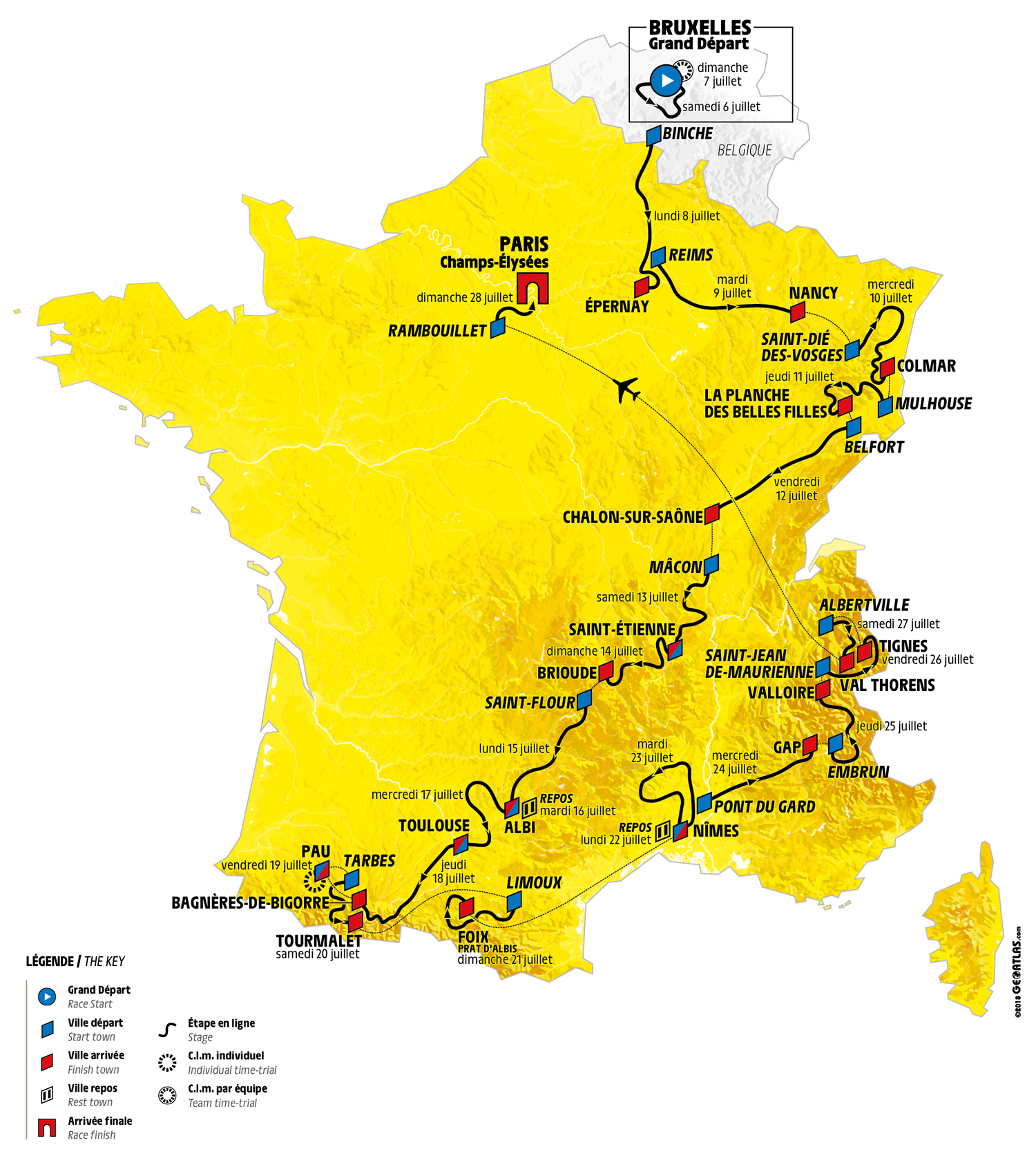 In chronological order, the Grand Est region was one of the first regions crossed during this edition of the race. After a departure from Brussels on the weekend of July 6-7, the cyclists headed for Lorraine, where the OR rose +3.9 percentage pts and the ADR increased by +7.30% in July. The athletes arrived in Reims on July 8, to follow to Nancy on the 9th. The fifth stage was then held between Saint-Dié-des-Vosges and Colmar on July 10. That evening, Alsace recorded an increase in overnight stays, with an occupancy rate up +14 points to 84.34%. Prices are also up (+18.35%) as is the revenue per available room (+41.9%), which reached €63.57 ex-VAT. Finally, the sixth stage of the event took place on July 11, between Mulhouse and La Planche des Belles Filles. The OR then reached 74.95% (+10.27 pts) throughout Alsace, and the RevPAR was €46.62 ex-VAT (+15.71%). They left the Easternmost region via Belfort (Belfort Territory, former Franche-Comté region) on July 12.

The ninth stage took place in Auvergne, in Brioude on July 14, for a start from Saint-Flouron July 15, to Albi. It is thus unsurprising that on the day of the storming of the Bastille the occupancy rate shot up +18.89 points for an average of 66.42%. Hoteliers did not take advantage of this opportunity to significantly raise their rates (+1.65%), but that did not prevent them from seeing their RevPAR progress by +42.05% (on average), the record change for the month in this region.

Finally the Tour de France cyclists arrived in Occitanie on July 15, through the entry point that was the city of Albi, and crossed the entire region until July 24 for a total of 7 stages with 2 days of rest. For nine days, all of France were fixated on this region in the south of France. And yet it didn't truly capitalize on the event on the whole: the OR improved slightly, from  73.30 to 74.30%, to produce a neural RevPAR up +0.60%, particularly since the ADR was down slightly (-0.80%). In reality, Occitanie's situation is all across the board, and the athletic event has been concentrated in certain departments, whence a fairly limited impact.

The race was concentrated along the Albi-Toulouse-Tarbes axis and then went up from the city of Foix to Nîmes. On the Midi-Pyrénées side, the stages were held, in addition to Albi (Tarn) and Toulouse (Haute-Garonne), in Ariège, Foix Prat d'Albis, and in the Hautes-Pyrénées, namely in Bagnères-de-Bigorre, Tarbes and Tourmalet. On the Languedoc-Roussillon side, they were held in Limoux (Aude) and Nîmes (Gard), as previously mentioned. The Languedoc region, where the race ran along its entire length, thus produced very positive results for the month of July: OR up +1.3 pt, ADR up +0.50% producing a good  increase in RevPAR by +2.30% to €54.90 ex-VAT.