Firmly opposing the reform of the SNCF that is sought after by the government, railway workers and their unions began a slowdown strike: from April 3 to June 28, thy will strike two out of five day for a total of 36 days across the period, and the unions called for mass mobilisation on April 17 and 18. Air France pilots, meanwhile, want a salary increase by 6%, which has been refused by management; 8 days of strike have been announced in April. How do travelers deal with these upsets? Do strikes penalize the hotel industry? Hospitality ON makes an initial assessment of their impact on the hotel sector. 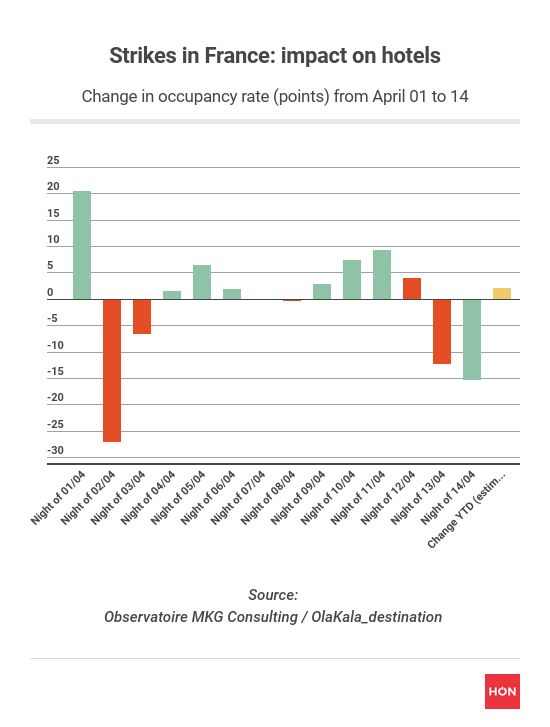 The daily change in occupancy rates at French hotels at the beginning of April shoes a sharp drop by -27.0 points for the night of April 02 to 03, due at once to Easter Monday and the first day strikes announced conjointly by SNCF and Air France. Occupancy rates were then down -6.4 points for the night of April 03 to 04, corresponding to the second consecutive day of strike by SNCF.

During these two days, the drop in occupancy led to a -19.5% drop in the RevPAR, while the average daily rate remained stable. This effect could be observed once again with the next series of SNCF strikes, of the nights of April 07 to 08 and April 08 to 09. However these weekend dates resulted in a much weaker drop in occupancy with a decrease in occupancy rate by -0.1 and -0.3 points respectively. During round three of SNCF strikes, the night of April 12 to 13 resisted with +3.9 point growth but dove down by -12.2 points from April 13 to 14. By comparison, since the beginning of the year 2018 the occupancy rate has grown by +2.0 points on average, outside periods during strikes. the missed earnings are thus significant. Moreover, the drop on Saturday, April 14 is noteworthy, but especially related to the date of Easter, which took place during that weekend in 2017; this drop may thus looked at with respect to the increases earlier in the month (+20.5 points April 1).

Overall, on the three periods of SNCF strikes, the drop observed is by -7.0 points in occupancy rate versus an average of +2 points growth since the beginning of the year.

The impact impact observed is thus significant, albeit nuanced since, inversely, increases have been observed on the nights prior to the SNCF strikes, for example +9.2 points ton the eve of the third series. To avoid difficulties due to the strike, some clientele changed their travel dates, leading to a partial shift of demand to the nights preceding the strike. This dynamic of moving travel dates nonetheless does not make up for the more significant drop thereafter, when train circulation was upset.

On a national scale, the Air France strike does not appear to have such a significant impact on France's hotel industry: except for the first day of of joint strike with SNCF that was marked by a drop in occupancy rate, the change in the index remains positive on the days of Air France strikes.

In addition to the aforementioned occupancy rate, SNCF strikes made an impact on another area of the hotel industry: reservations. If we look at rooms sold between April 1 and 9 for the period from April 9 to June 30, the trend corresponds to the previous analysis. Once again, clientele adjusted their reservations to before or after the SNCF strikes, particularly regarding last minute reservations. 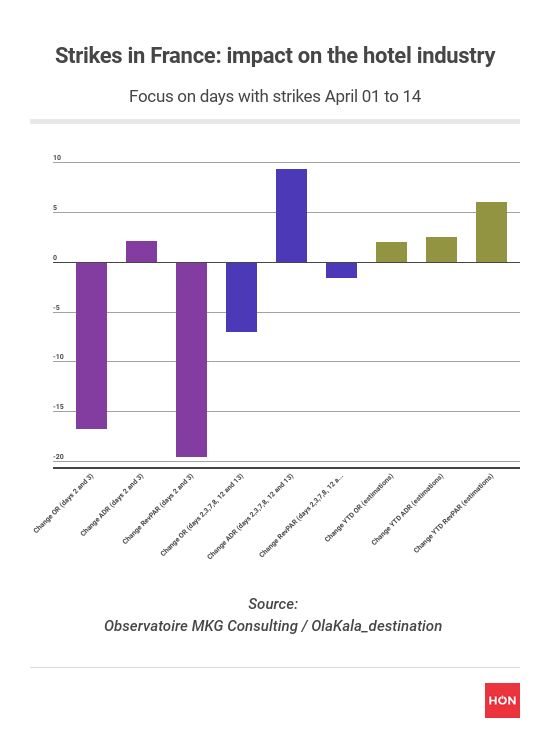