The hotel industry in the main French cities is celebrating this year as all are experiencing growth in their RevPARs. While situations differ for each one according to their attractiveness and supply, price increases will generally have been the driving force behind their growth.

Paris Intra-muros symbolizes this with an +8.1% increase in ADR after several years of decline.

Rennes has had a record year and ranks 2nd in terms of revenue growth in 2018. The Breton city, which performed well throughout the year, including the summer season, saw its RevPAR rise by +9.9%. The arrival of the TGV, the development of an offer for business customers with its new Congress Centre - the Convent of the Jacobins - suggests that the city has a certain growth potential for the years to come. Roazhon Park, the stadium in Rennes, will host 7 matches of the FIFA Women's World Cup in the summer of 2019.

The Brittany coasts, a regional ambition

After two gloomy years, the Côte d'Azur - "French Riviera" for our british readers - made a strong comeback in 2018. Cannes is part of a strategy fully oriented towards luxury and has one of the highest average daily rates in Europe at 144.2 €. Their increase (+4.1%) is justified by the move upmarket of hotels, which nevertheless see their volume of clientele - which is more limited due to high prices - stagnate (+0.4 points). The renovation of the Croisette, the widening of the beaches and the reconstruction of Palm Beach could become new drivers for the city's attractiveness.

Cannes: the queen of aerobatics

Nice, meanwhile, succeeded in increasing its OR (+2.3 points) and ADR (+6.2%), thanks to increased arrivals of foreign customers. Nice airport now handles twice as much international traffic (up +4.7%) as domestic traffic (+2.6%); the strongest growth comes from the Middle East (+33%) via the development of Emirates and Qatar Airways' offers. 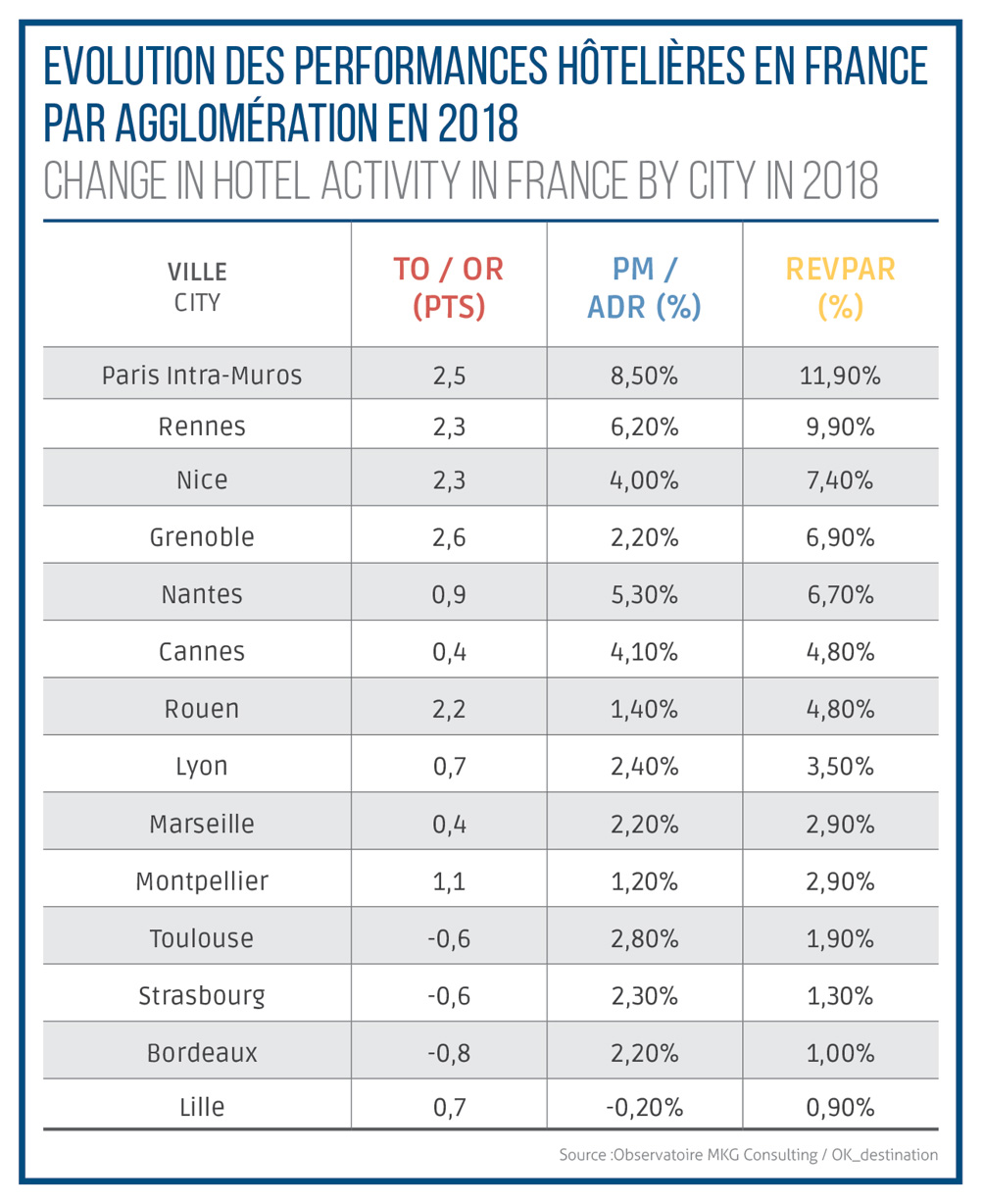 Grenoble's hotel industry has seen a return to growth in recent years following complicated periods. Although its OR (+2.6 points) and ADR (+2.2%) increase, they start from fairly low levels of 58.1% and 63.5€ respectively. The decline in the number of hotels is not unrelated to this improved performance. The city's companies, many of which are high-tech oriented, will be able to push the hotel industry towards new thresholds, provided that they achieve a dynamic 2019.

Nantes works on its appeal to digital companies through events such as Nantes Digital Week and Web2day. These paid choices boost hoteliers' ADRs: + 5.3%.

Strasbourg is the capital of Christmas and lights in the face of obscurantism. Despite the terrorist attack, the attractiveness of the city and the appetite of tourists to visit it were not totally affected.  Hoteliers' results show this in December with an increasing RevPAR of 7.3%, slightly affected by the drop in OR this month (-0.5 points). Over the year, however, the increase in revenues was less significant (+1.3%).

Attack in Strasbourg: what impact for the city's hoteliers?

Lille is struggling to get back on track and has seen its hotel performance stagnate for several years. Its RevPAR decreased in 2017 (-1.2%) and increased only very slightly in 2018 (+0.9%). The market in Lille, which shone brightly this year thanks to clear weather, did not make hoteliers' results shine brightly, however: their OR stagnated (+0.1 point) compared to the previous edition and ADRs fell (-3.2%).

Bordeaux has enjoyed a growing international attractiveness in recent years thanks to the opening of the Cité du Vin, its pole position in the Lonely Planet guide and its new exhibition hall. While in 2017 its RevPAR grew +5.9%, it barely reached +1.0% in 2018, indicating that the tourism industry has reached a more mature threshold. Its attendance is down (-0.8 points) while its supply has grown only slightly. 2019 will nevertheless see many hotel openings with more than thirty projects in progress.