Following our top French cities for hotel markets, Hospitality ON's editorial team invites you to a detailed look at each city on the list. Each focus will provide an opportunity to draw a portrait of the destination: analysis of figures, major projects in progress... These texts will also be invitations to reflect on the challenges facing each destination. Next up: Nice.

Click on the following links for our different city focuses and Top Cities:

Analysis of the figures

2018 was a great year for Nice, where occupancy rates are back to pre-terrorist attack levels. A drop in prices has enabled the occupancy rate to rise by 7 points, a real recovery that limits the decline in RevPAR. Especially since the market is stable with the number of competitors equal or even slightly down and the room supply around 9,000 for several years. On the other hand, demand is increasing, with an increase in arrivals at the airport, an increase in the number of overnight stays between 2016 and 2017..... And the OR is up even as the number of Airbnbs has exploded and is approaching number of rooms: 7,276 Airbnb listings vs 9,377 hotel rooms. The supply is almost stable, demand is rising, prices are attractive: it was a good year for Nice.

The effects of seasonality need to be qualified. Key figures for tourism in the Côte d'Azur, published by the tourism observatory on the coast (affiliated with the Côte d'Azur France regional brand, itself linked to the Regional Tourism Council), show 6 out of 10 nights in the summer. Of course, the figure is very high, but it concerns the entire coast and all types of accommodations. And this figure of 6 nights out of 10 must be qualified, again according to the observatory, fewer than 1 in 2 tourists come during the summer period. 16% of tourists come for business, so mostly off-season.  As for business tourism, Nice is ahead of the curve, with the Grand Arénas, where a new exhibition centre is expected to open in the coming years.

Hotel openings are scheduled in the near future, particularly in the Grand Arénas business district, with an Okko and a Sheraton. The 160-room Plaza, one of Nice's iconic hotels, is expected to be completed in 2019 and become a high-end property. Other openings are in the pipeline, such as at the Convent of the Visitation. The number of hotels is stable (closures mainly concern hotels on the outskirts and peri-urban areas) but is expected to increase again.

In short: the market is very solid for the hotel industry.

Contextual details: the problems, the risks

The destination was affected by the attack of July 14, 2016. It took more than 2 years for a return to normal hotel attendance. An attack also increases security costs as well as needs for marketing communications. It is important to remain alert on the security front and to preserve the destination's brand image.

As is often the case, the environment emerges quickly and prominently in the risk logic. For example the proliferation of jellyfish, which will probably not stop and which requires the installation of nets (very difficult or even impossible in Nice, as the Bay of Angels being too deep), results in general increases in the costs of monitoring and management... (See the ACRI STP observatory for real-time observation of jellyfish populations on the shores of the Mediterranean). As for water quality, the episode of red mud in the Calanques Park should serve as a signal: the coastline is fragile and polluted water is very bad publicity for national tourism in particular. In Nice, the quality is said to be excellent, even if the quality in 2018 was not as good as in 2015. Nevertheless, for a destination like Nice, water quality remains a crucial issue and should not be relegated to the background on the pretext of good results. Many buildings are in flood-risk areas (around the Var, work has been carried out to secure the banks and the land). The geography and demographic evolution of the area maintain a high level of pressure on the land. A key topic for the hotel industry: where to build new hotels? At what price per square meter? Especially since the future of Nice is undoubtedly on the plain of the Var, where EcoVallée, an operation of national interest, has been implemented, that has been criticized for not sufficiently taking into account the risk of flooding. Another risk typical in the south of France is fires. In 2018, 47 fires were counted by the Ministry, between 2014 and 2018 an average of 379 hectares per year went up in smoke in the department. Once again, vigilance is essential.

Another aspect typical of Nice: the structure of the population. A third are retirees. However, the latter have recently lost purchasing power, which could slow down consumption and growth in the region. France has a unique age pyramid that over time can cause problems of cohesion, social ties, as well as economic changes with an increase in personal services, health, employment structure, etc. More than a risk factor, they represent data that needs to be known. Something else that is essential to understanding the territory is the weight of the so-called right-wing parties in local politics. The LR federation of the Maritime Alps is one of the strongest in France, with some 7,000 members: a rare number today. Another important factor is the fact that the Mayor of Nice was Minister under Nicolas Sarkozy's five-year term: local elected officials have influence on a national level. In addition, there is a rivalry between the territory's two important figures, E. Ciotti and C. Estrosi, which is constantly developing through tweets interposed against a municipal background.

Finally, before moving on to the main subject of the Nice metropolis, it is important to consider Eco-Vallée, an operation of national interest. In addition to the risk studies, which were criticized at the beginning of the project, it should be noted that it is still difficult to find information on the project today: precise delivery date, financing... While the Var Valley is covered with cranes, and it was about time since the projects have been running for 10 years now, a remains to be done. Not to mention the necessary after-the-fact studies to determine the real impact of the money spent, meaning 300 million euros provided by taxpayers, with the rest from private funds (80% of the budget according to some sources). 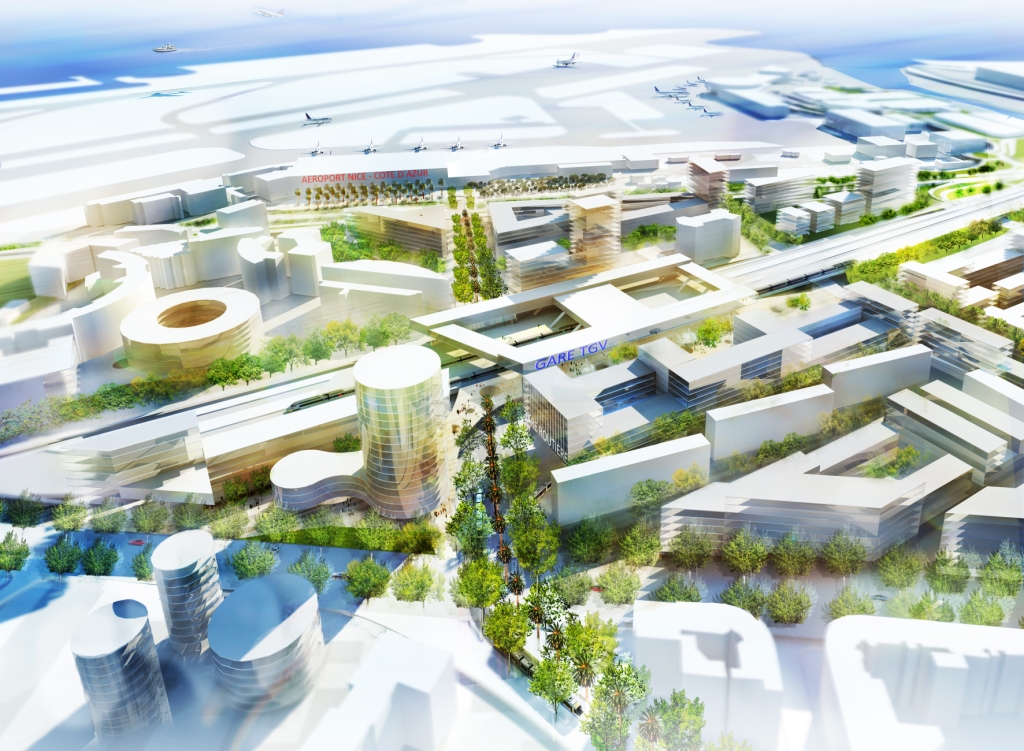 Nice has many projects. The city has the privilege of being the site of one of the few Operations of National Interest (OIN), the most important urban planning tool available in France (13 in metropolitan France). In Nice, Eco-Vallée, i.e. the creation of a district marked by sustainable development along the Var Valley, from the airport to Bonson. For Nice, this is reflected in three areas: an international business district at the Grand Arénas, a new "Nice Méridias" district, and a new technopole/eco district further north, around the new Stade de la Riviera; delivered in 2013. In addition, there is a market of national interest, the second in France, which will be moved higher up in the valley to make way for the new exhibition centre.  The aim is to free the city of Nice of its geographical constraints, between the sea and the Alps, for new development and to shift the centre of gravity to the west, to the Var rather than the coast therefore. There is potential for 3.5 million square meters that can come out of the ground. A huge project, started in 2008 and expected to be completed around 2026 (the budget for the operation having been approved until that date). The operation is entering a critical moment: launched 10 years ago, all the appeals have normally been purged and all the problems resolved, some islets and infrastructures have already emerged, and now the operation is accelerating, with many openings planned over the next two or three years. This timing perfectly matches the recovery of tourism in Nice.

First, in the North, between the stadium and the airport, Nice Meridias is part of the OIN. The stadium was delivered in 2013 and has 24 hectares for a district resolutely oriented towards high-tech functions, R&D and innovation, with an idea for a a synergy with Sophia Antipolis. The project will include 2,500 housing units and more than 150,000 square metres for businesses, research and hotels. The district will house the Mediterranean Institute for Risk, Environment and Sustainable Development (IMREDD), affiliated with the Côte d'Azur University. The Institute's new headquarters is scheduled to be inaugurated in September 2019. Further south is the European Business and Innovation Centre, which hosts or has hosted no fewer than 140 start-ups. The Joia Meridias enclave, dedicated to well-being, should be delivered in 2020.

Further south, just before the airport, the new Grand Arénas business district is developing. This is a 41-hectare extension of the Arénas business district. Two hotels have already been announced in the area, a Sheraton and an Okko, both top-of-the-range, for deliveries between 2021 and 2022. In particular, a large exhibition centre is planned, with a surface area of at least 75,000 square metres (a discussion is under way regarding the possibility of adding 30,000 square metres to the complex). The only problem is that the project, if confirmed and budgeted, has also been at a standstill for 2 years, against a backdrop of controversy between local political leaders via tweet, due to a delay in moving the national market currently occupying the site: in short, work has not progressed. A point to watch out for when creating any offer: while the exhibitions will bring overnight stays, it remains uncertain when the first exhibitions will take place....

The whole complex should be connected, as far as the old town of Nice, by new tramway lines. These will intersect at a large multimodal station, at the airport, that will allow you to go north, along the Var Plain, or east, along the coast to the old town and the port. These two new lines should be operational in 2019. In the third quarter for the east-west line, and at the end of the year for line 3 in the valley.

As for events and other important dates for the coming year, it should already be noted that the stadium in Nice will host matches of the Women's World Cup, which will take place in France in 2019. There will also be the Nice International Fair in March, at the Acropolis, the Bridal Fair, the Art3f for Contemporary Art, Nice Jazz Festival, Carnival (which seems to have new ambitions this year)... enough to keep the city that has just renovated Garibaldi Square and one of its train stations going.

Another undoubtedly positive point is the establishment by the Regional Tourism Council of a territorial brand intended to be strong: Côte d'Azur France. It is the only brand of its kind that has added the name "France" directly to its identity. The brand was launched just after the attacks. The terms are also used in the marketing of the Nice office, which is called "Nice, Côte d'Azur". The whole replaces the former Nice & Smart brand in Nice. These brand creations were a necessity to restore the image of the coast after the attack. The operation is classic, ambassadors, partners, advertisements on social networks. The brand now boasts half a million followers, 300 partners and 60 ambassadors. All of these factors make it possible to set up sites that facilitate navigation on the territory: finding a place for a seminar, finding a hotel, key arguments for choosing the region over another. Nonetheless, the coast is what is highlighted and not its largest city.