With a net increase in hotel chain supply by +4%, figures are in line with those of international tourism. Brands are a powerful driver of hospitality renewal with an obvious shift towards new generations. Concepts are multiplying and appearing on almost every continent.

For more information, see the first and third parts of this article.

The Chinese economy brand, which is now part of the fold at BTG, the leading Chinese tourism group owned by the municipality of Beijing, plans to benefit from this strengthening of the structure to continue its expansion on the national territory. After a relative pause, at the bidding of its CEO David Sun, two years ago the presentation of the new concept Home Inns was followed by an intensive launch policy. Rivalry is now evident with the two groups that have been competing since the beginning: Jin Jiang International, which is the property of the City of Shanghai and operates 7 Days Inn, and the Hanting brand generated by Huazhu, or China Lodging Group founded less than ten years ago by Ji Qi, founder and chairman of Home Inns.

Third on the podium, with a similar umbrella brand policy, Best Western manages to slip in between the two Chinese economy brands, nonetheless it has lost ground with respect to last year. As a cooperative membership association that is increasingly demanding regarding the commitment of its members, Best Western began a new segmentation policy with a restricted launch of the generational brands Vib and Glö. But the trend is now towards rigor in terms of respecting standards, particularly regarding its upscale division with Best Western Premier and Best Western Plus. Thus, properties that are unable -or do not wish- to pursue this quality upgrade have no choice but to leave the group. Globally, and especially in the United States, this has caused Best Western’s supply to shrink by nearly -6%, and the chain to drop below 300,000 rooms worldwide.

Ibis – the mega brand covering both the Budget and Styles brands – remains comfortably in 5th place with a steady growth rate. Following +5.5% growth in 2015, net growth in 2016 is greater than 6%, particularly thanks to installations in emerging territories. AccorHotels may be satisfied with the strategic partnership signed with China Lodging Group, the master franchisee throughout the Greater China region of AccorHotels economy and midscale brands. Founder and chairman Ji Qi uses every resource necessary to unfurl this occidental brand in a country that appreciates brands with a French touch.

Hampton by Hilton remains in 6th place with the founded reputation of the most profitable and performant brand in the entire Hilton Worldwide franchise portfolio. Its international development began a few years ago with a priority for Western Europe, the United Kingdom, Germany and soon France with a first property at Roissy CDG. Alongside DoubleTree and Hilton Garden Inn, Hampton Inn is the American group’s international flagship brand. In fact, the growth rate (more than 11% for Garden Inn) for new rooms is unusually high for a Western brand. 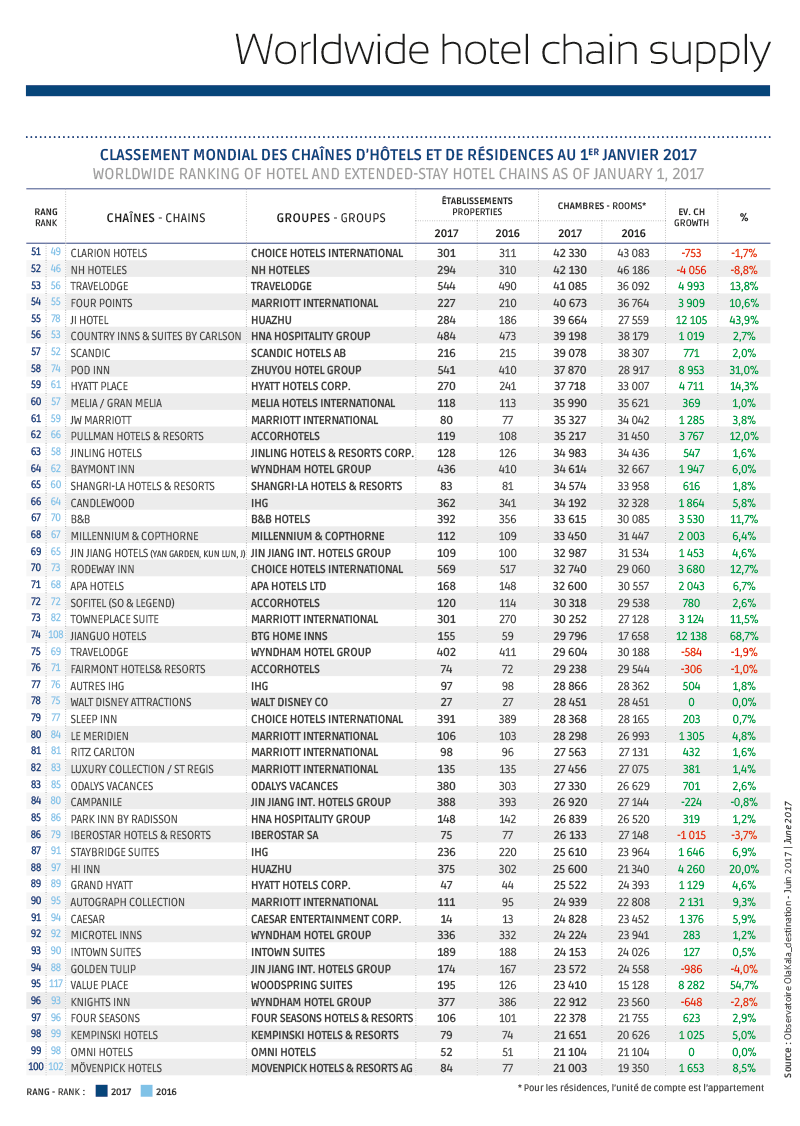 The new face of the outdoor hospitality industry