France is a market where tourism revenues do not accurately reflect traffic generated by international arrivals. The report published by the Assemblée Nationale points out that they are "largely beneath their potential".

The top-5 ranking of international arrivals does not correspond to that of revenues generated by this same activity. Spending per tourist is not the same from one destination country to another, because on the one hand the cost of living at the destination and on the other hand pricing for the local tourist offer (accommodations, catering, activities, etc.) are different.

Thus, it is generally felt at the level of a country, and has a positive or negative impact. In the case of France, revenues would be "disappointing", since the country is first in terms of the number of arrivals but third in terms of tourism revenues, after Spain.

There are several reasons why market potential is not being exploited. First, arrivals are concentrated in both certain areas (Paris first) and certain seasons (summer). Also, closing hours, especially for Sunday rest, clearly get in the way of tourists' shopping.

Growth potential would lie in stretching and spreading visitors to under-exploited regions and seasons, and in opening shops on Sundays. Particularly useful is the "creation of new international tourist areas (ITAs) in tourist resorts and cities," which enjoy special status in this regard.

Finally, tourists simply do not spend enough at the destination. The spending per stay per tourist would be €260 including VAT, an amount that has increased only slightly since 2013. Overall, US$67 billion  were spent in France in 2018, which earned it fifth place in the ranking after Spain (US$74 billion). USA was first on the podium with US$214 billion in spending (source: WTO). One solution would therefore be to develop the offer (activities, accommodations, etc.) as it does not currently offer tourists "all the opportunities for consumption". 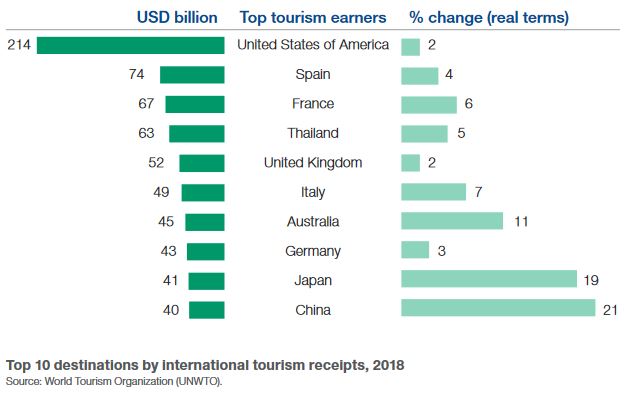 Georges Panayotis points out the role of destinations that must address tourists' needs by developing an adapted and attractive supply. Hear his remarks on this subject (in French).