Brexit, trade wars, populism and demonstrations... European countries suffered a number of blows in in 2018, impacting their economic activities and tourist flows. While there have been many challenges and most of them remain to be resolved, European hoteliers nonetheless show improved performance in 2018, demonstrating a certain appetite among tourists to continue to visit to the old continent, regardless of the weather.

2017 succeeded in combining an occupancy rate up by more than +2% in each segment with a strong increase in ADR (+2.5% overall). 2017 was the symbolic year of market recovery and renewed confidence in the safety of European destinations. The hotel business was then emerging from a complicated period bruised by the terrorist attacks - which unfortunately have continued - and occupancy remained unchanged between 2015 and 2016.

While optimism remains high in 2018, hotel occupancy seems to have reached a more mature level and is stabilizing at 72.7% thanks to an overall 0.8 point increase. The time has come for the growth inn ADRs for hoteliers: +3.1% for the economy, +3.4% for the midscale segment and +4.7% for the budget segment.

With few exceptions, the European hotel industry recorded a price increase in 2018 in all segments. If occupancy rates stagnated after a dynamic 2017, growth in revenues went undeterred in 2018.

The midscale segment represents the most fit segment with the highest increase in occupancy rates (+1.2 points) and average daily rates up by 3.4%. RevPAR growth grew by 5.1%, driven by business customers.

While the budget segment saw its prices increase most sharply (+4.7%), its occupancy rate slipped, unlike the other segments (-0.3 points). However, this decline is not part of a fundamental trend and last year the segment achieved the highest increase in OR (+2.4 points).

While in 2017 the budget and high-end segments were the drivers of growth, these extreme segments underperformed the following year in comparison to the mid-range and low-cost segments. The latter gained 1.0 points in occupancy rate and saw its average daily rates surpass the €70 mark with a 3.1% increase. 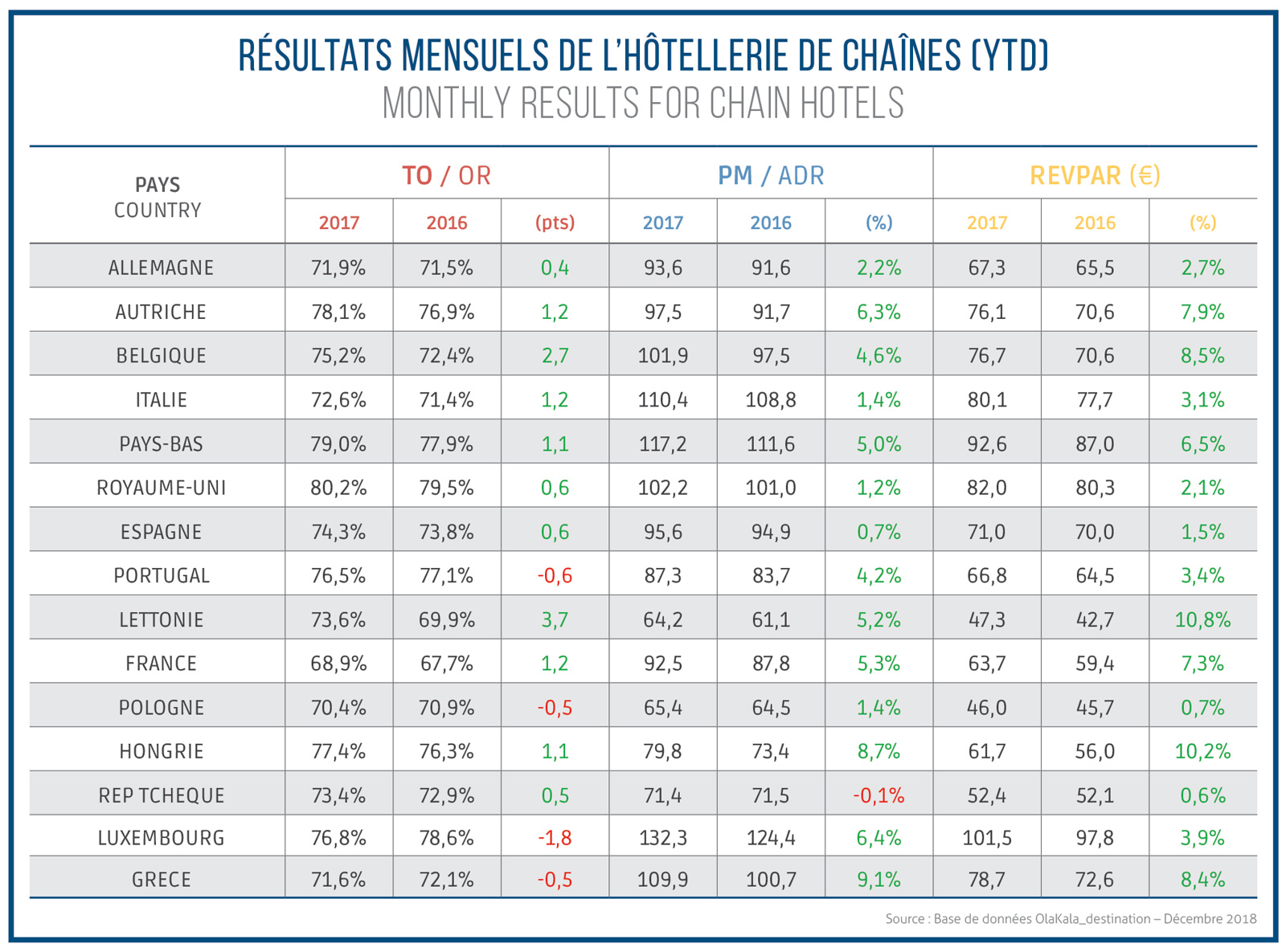 Although 2018 had started off rather well with a +4.7% increase in RevPAR overall in January and +5.3% in April, this momentum was halted in May (-1.1% of revenues) with Germany's poor performance.

Summer allowed the European hotel industry to improve thanks to the Mediterranean region and unspoiled destinations such as the Netherlands, Austria and Latvia.

The Baltic country had a record year with dynamic occupancy (+3.7 points to 73.6%) exceeding the European average (72.7%) and average daily rates up by 5.2%. Hoteliers particularly benefited from festivities associated with the country's centenary and the Pope's visit.

Amsterdam: appeal to soon be called into question?

Austria and the Netherlands both posted moderate growth in their occupancy rates, which were already at mature levels, to 78.1% (+1.2 points) and 79.0% (+1.1 points) respectively. With economies in fine fettle boosting the arrivals of business customers and cities with cultural offers that European tourists are fond of on weekends, hoteliers are able to better fill their properties throughout the week and at the same time increase their prices, which jumped by 5.0% in the Netherlands and 6.3% in Austria. In addition to Luxembourg, the Netherlands has the highest RevPAR in Europe at €92.6.

The Duchy, whose main foreign visitors are tourists from neighboring countries, and especially Belgium, Germany and France, saw its occupancy drop by 1.8 points, but nonetheless remain at a high level (76.8%). The increase in its prices (+6.4%) enabled its RevPAR (+3.9%) to cross the three-digit mark to €101.5.

Its neighbor Germany struggled to increase its occupancy rate (+0.4 points) and saw its prices rise by +2.2%, which was smaller than the European average (+3.3%).

Munich: a lean year for the secret capital

The United Kingdom is in the same situation with moderate increases compared to European averages, although it should be noted that its levels are among the highest on the continent. British occupancy thus exceeded 80% and average daily rates were higher than €100.

Belgium's hotel industry had started last year, signing +13.9% growth for RevPAR after the annus horribilis of 2016. The kingdom continues to build on its momentum with an 8.5% increase in RevPAR. It should be noted that its occupancy rate has increased by nearly 10 points in just two years, from 65.8% in 2016 to 75.2% in 2018.

In the Mediterranean region, two situations stand out

On the one hand, Greece and Portugal growth in hospitality in Europe with RevPARs leaping by 14.7% and 18.8 % marked by positive growth in OR and a bound in their ADRs.

The Chinese Cosco stormed the hotels in the port of Piraeus

Portugal: what opportunities for Wyndham?

On the other hand, Spain and Italy made more moderate progress with RevPAR increases of +1.5% and +3.1%.