On Friday, MKG, the research and consulting firm, published an analysis of the significant impact of the acquisition of Mövenpick Hotels & Resorts by AccorHotels. A gain of 20,000 rooms for the operator, which would prolong the movement already underway to increase the strength of the French hotel champion in the upscale & luxury segment. The world's top 12 upscale groups saw their customer base grow by 41% over the last three years.

Over the past three years, the hotel industry has seen numerous mergers and acquisitions that have led to major changes in the sector's landscape and in the global hierarchy of players. More specifically at the top end of the market, major movements took place in 2015/2016, with the acquisition of Starwood by Marriott International, Dolce by Wyndham, Kimpton resorts by IHG and FRHI (with the Fairmont, Raffles and Swissotel brands) by AccorHotels. This operation allowed the French group to cross the symbolic threshold of 100,000 upscale and luxury keys, and then climb above Carlson Rezidor. By 2018, it will be the world's number 5 in upscale and luxury, while it is number 6 worldwide in all segments, behind the Wyndham Hotel Group and the Chinese group Jin Jiang. 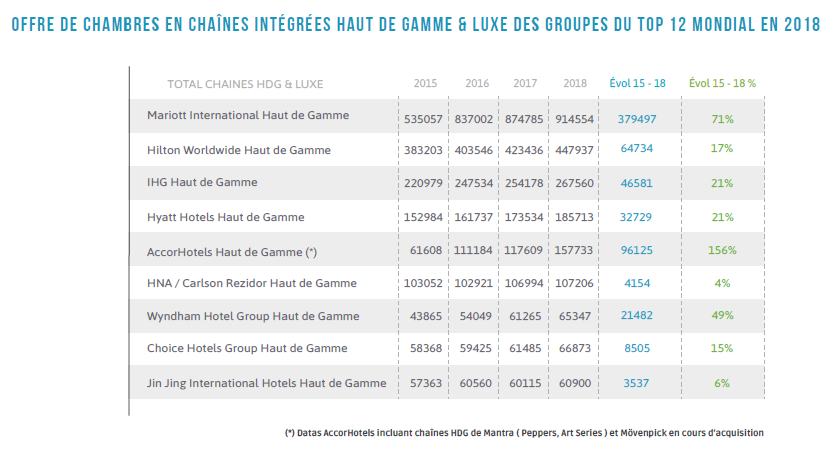 The Frenchgroup has continued its activism in recent months through the acquisition of equity stakes in the Banyan Tree and Rixos brands, and recently the acquisition of the Australian Mantra Group, whose portfolio includes the Peppers and Art Series brands, that is still being finalised. These movements accentuate the consolidation momentum observed in recent years, as would the takeover of Mövenpick Hotels & Resorts by AccorHotels if the rumour were to be confirmed.

In this case, AccorHotels would have 157,733 upscale and luxury rooms worldwide, 2.5 times the number the group had only 3 years ago, on January 1, 2015. And in volume, with a net gain of more than 96,000 rooms, the French group is the 2nd most developed in the upscale segment, only giving way to the world leader Marriott International, which was able to rely on the major operation that was the takeover of Starwood. In the higher ranges, AccorHotels would thus be closer to Hyatt Hotels Corporation, which had more than 185,000 rooms. This will further bolster the buying dynamics of the major groups, which are attracted by the fees linked to management contracts of brands in this segment.