Imagine an aerobatic show between inflatable pylons 25 meters high with a starting line and a finish line. The ensemble forms a circuit on which twenty or so elite aerobats perform. For the first time in France, the second phase of the Redbull Air Race 2018 was held in Cannes from April 20 to 22, 2018. Hospitality ON analyses the impact of this event on the hotel sector.

Broadcast in 118 countries, the city of festivals once again found itself in the spotlight. Despite very high security and difficult circulation in the streets, the public was present to enjoy the pilots' aerial prowess. Although the event did not achieve the audience of 100,000 that the organizers had hoped for, that goal was not far off as a total of 83,500 attended the event from Friday, April 20 to Saturday, April 21, with  34,000 on Sunday, April 22.

Residents of Cannes and tourists alike admired looping, acrobatics and other aerial acrobatics. Moreover, 2,000 employees were mobilized alongside 651 volunteers to ensure this aerial competition went smoothly.

During the weekend an influx of around 50,000 people were expected in the city center. The city thus adapted its traffic plan in function of this. Throughout the event, streets were closed to traffic on the two roads north and south of the Croisette. Moreover, 14 streets were closed during the hours of the event and 10 were closed permanently at their southernmost extremity. The period to set up and dismantle structures caused part of the Croisette to be closed off starting Tuesday, April 17. 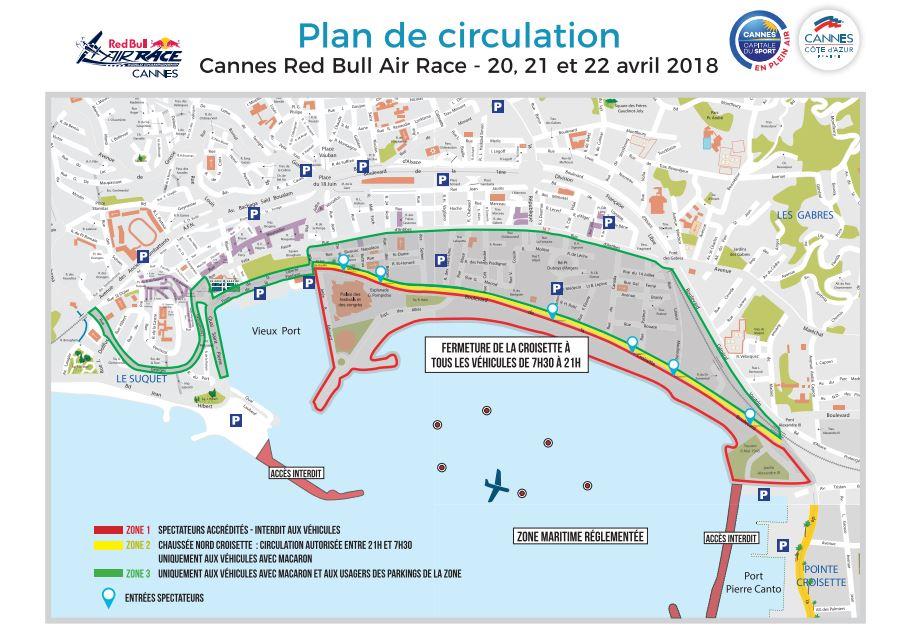 Near the sea, beach chairs and umbrellas welcomed crowds of customers. So while the impact was positive for the vast majority of shopkeepers, some were disappointed by the low volume of business they received. In the Suquet district, Rue Clemenceau was closed, cutting off traffic through this major artery and preventing tourists from wandering outside the perimeter of the event.

Overall, Cannes' hotels posted good results in terms of RevPAR with four days of growth by +6.5%. This indicator nonetheless goes hand in hand with a drop by -5 points in the occupancy rate and an increase in average daily rates by +16.4% to prices ranging from 178.77€ to 208.05€.

This slump is characterized by the drop in occupancy by -24.6 points the night of April 19 and by -7,0 points the night of April 20. Ainsi, thus, this "loss" of clients affects the RevPAR resulting in a -39.4% drop on Thursday an -9.3% on Friday. This phenomenon may be explained in particular by shifted travel dates of French clientele who are concerned about the unavoidable increase in prices. The latter are up progressively from -4% Friday, April 19 to +44.9% on Sunday, April 22, or 236.99€ versus 163.51€ the previous year. This 73.48€ did not go unnoticed by potential tourists.

Occupancy then stabilized at +9 points the night of April 21 and +1.8 points in the night of April 22, while the RevPAR progressed and reached 50.6% on Sunday, after a sharp drop by -39.4% three days earlier. Because of this, the indicators suggest that the hotels were occupied clientele essentially consisting of pilots and their teams as well as all personnel involved in the event's organization.

Thanks to summery weather, crowds could also enjoy the sumptuous aerial ballet demonstration by the Patrouille de France. The city mayor David Lisnard, rejoiced at the "economic, social and communications" windfall that contribute to the city's "image of quality and reliability on an international scale."

The next date for a Red Bull Air Race is May 26 and 27, and will be the third phase in the world championship in Chiba (Japan). For more information about the evolution of demand in the PACA region, read our hospitality forecasts.