Following our top French cities 2018 for hotel markets, Hospitality ON's editorial team invites you to a detailed look at each city on the list. Each focus will provide an opportunity to draw a portrait of the destination: analysis of figures, major projects in progress... These texts will also be invitations to reflect on the challenges facing each destination. Fourth from the top: Marseille.

Click on the following links for our different city focuses and Top Cities:

Analysis of the figures

Marseille has become a city for tourism.

And to achieve this goal, the actors have not skimped on resources, whether it be the State, the Region or the city: an operation of national interest, with a budget of 10 billion euros; the opening of a new museum, prestigious equipment, MuCEM; obtaining the title of European Capital of Culture, new tramway lines... The complete range of the development is set for growth and to create a destination. These efforts are not new: in 2001, 18 years have already passed since then, the High Speed Line opened, putting Paris 3 hours from Marseille. It must be said that the city started with a long way to go. Take the hotel supply as an example: before 2013, the year of Marseille Provence, European Capital of Culture, the city had no 5-star hotels and only one 4-star hotel. 5 years later, the numbers are quite different: 4 5-star hotels and 18 4-star hotels. The figures are very telling, including those given by INSEE:

and those provided directly by the intermunicipality, Marseille Provence: 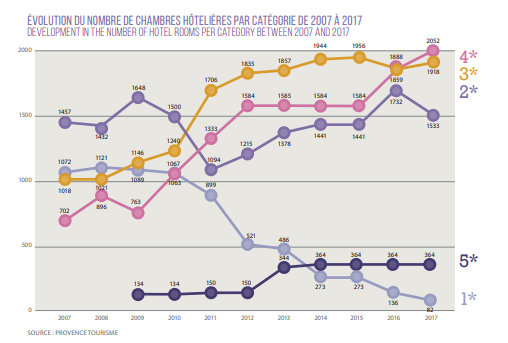 In both cases: the offer is increasing. With very clear gains in the 3 and 4-star segments, at the time of Marseille Provence, European Capital of Culture, but also in 2015, just before the EuroCup. Some openings are emblematic of this rebirth - or even practically birth - of tourism: the Intercontinental in the Hôtel Dieu in Marseille, the Petit Nice in Passédat, the Golden Tulip in La Joliette, the district of the Euroméditerranée operation, one NH Collection and one NH How. Other hotel deliveries are also planned: in 2019, a 4-star Mercure is expected to open on the Canebière. Its ambition is to become a symbol of renewal for the Noailles and Belsunce districts.

And on the supply side, once again, the evolution is strong. Between 2007 and 2017, the number of overnight stays increased by 7.5%. It is perhaps on the cruise passenger side that growth is most impressive: 1,595,007 in 2016 from 429,661 cruise passengers in 2007, more than a million more in less than 10 years. 2016 remains the strongest year for the port of Marseille, although the final 2018 figures will undoubtedly mark a new record (around 1.7 million cruise passengers were expected at the beginning of the year). The same increases can be seen in the figures for Marseille Provence airport, with nearly 10 million arrivals by air, in 2018 the figure was around 9.4 million people (figure not consolidated and based on a press release from the airport). The international arrivals segment is the most important for the airport, with a 9% increase in growth between 2016 and 2017 and a 6% increase between 2017 and 2018.

These good figures are reflected in the hotel performance indicators. The average price is rising, to reach around 83 euros (ex-VAT), as for the RevPar, which ends in 2018 with an honorable figure of 55.60 euros (excluding VAT).

Big blue sky for the city of Marseille then? This impression probably needs to be qualified. For example, for new hotels: the OR did not increase between 2017 and 2018; and in a city long in need of hotels, Airbnb has taken a significant share of the market. As of March 5, 2019, AirDnA registered 6,425 ads on the platform, almost the same number as the number of hotel rooms. This undoubtedly provides an indication of the populations visiting Marseille: young and urban. There are other sectors to look for, notably the business segment with the much sought-after Euroméditerranée business district in La Joliette. On the other hand, growth seems to be slowing down: 6% on international arrivals between 2017 and 2018, compared to 9% the previous year, representing a slight decline. This is also reflected in the figures for cruise passengers, with a decline in 2017. There is probably a slowing down effect after its great years as European Capital of Culture. In short, Marseille has appeared on the tourism map: then what? And then above all: at what price?

A few elements for context: the problems, the risks

The first sore sport for the destination Marseille is the collapse on rue d'Aubagne: on November 5, 2018, two buildings on this downtown street collapsed, killing 8 people and injuring 2. The site is not even 100 meters from Le Mercure, which is due to open in 2019, and about a 5-minute walk from the Old Port. The opportunity cost of a center degraded to this point is undoubtedly unimaginable, especially when just next door work is underway to make Place Jean Jaurès (La Plaine as the people of Marseille call it) more pleasant following the beautiful renovation of the Old Port. In fact, the problem is no longer about presenting a historic centre to tourists to make it postcard perfect, gentrified or not, or to calculate opportunity costs: the habitat has become a security issue. A dignity issue. It is enough to look at a government report from 2015, headed by Inspector Christian Nicole, which already mentioned an "unworthy and degraded habitat of a rare magnitude". 13% of the city's primary residences are reported to be in poor condition. In the Noailles district, yet located in the very centre, so close to the Old Port, this rate rises to 35% (for co-ownerships with fewer than 25 apartments and for buildings dating from before 1949: in other words the entire district to be clear). To fully understand the extent of the risk, simply look at a map of Airbnbs located in Noailles and Belsunce, very dense neighborhoods in the center, near the Old Port (the rue d'Aubagne, where the collapses took place is in red in the image): 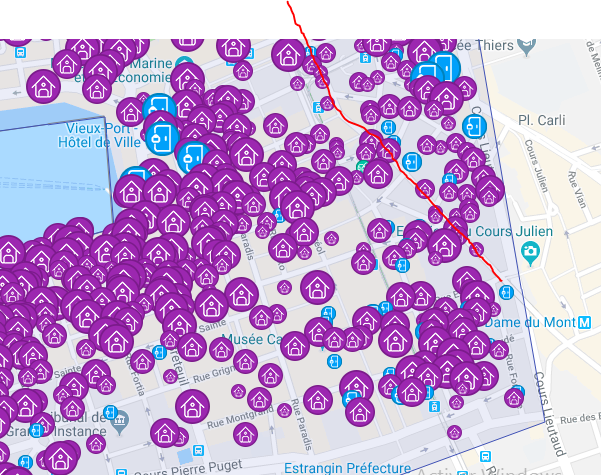 At the end of this street, a Mercury will open, and there is the Olympique de Marseille store, just before La Canebière which is perhaps the most famous avenue in Marseille. That said, we should not schematize or take a stance that only highlights the urgency of the situation, the reality of the risk. Indeed a lot has been done, but this concerns the more positive part of this article. As for the debate over budget allocation - the desire for a business centre on the left when the Centreville flows to the right is quite criticized - Marseille is quite simply, par excellence, urban complexity at its best and this is not where a solution will be found.  However, some important information for any development in the ancient city: Marseille is the most sprawling city in France. In the northern districts, complexes were hastily built in the 1960s to accommodate, among others, populations returning from French Algeria. It is in these neighborhoods that housing is the most unhealthy. To the southeast, part of the city is home to some parts of the Calanques National Park: here may be seen the contrast between the hyper dense city centre and the rare cabanons in the middle of the garrigue to the east. Such contrasts can be found everywhere: Pointe Rouge port, Old Port, Port, Port de l'Estaque.... In a single city! And what can we say to compare the rich villas of Roucas Blanc and the prestigious Cercle de Nageurs, when three kilometers away are the Cours Julien with it graffiti. All you have to do is take the names of the districts, a list in which the a stranger can quickly get lost: Belsunce, Saint-Loup, Mazargues, Le Redon, Le Panier, Castellane... Full of contrast, the result of a complex history, where Baron Haussmann had no hand, the villages merged: all these are issues to be taken into account when planning communications. Contrast, therefore, the result of a complex history, without Baron Haussmann, made up of villages that come together: all these are issues to be taken into account when building a communication. The other essential point to know about this urban planning is its sprawl that necessitates a car, as it spreads further causing complexity, or even an absence, of public transport. Two metro lines and three tram lines. Meanwhile, a city like Paris, although smaller, has 14 lines on its metro network. Another complexity to take into account in tourism development is that despite recent efforts in summer it becomes very complicated to park buses at Notre Dame de la Garde, the most visited monument in the city. This partly explains the slight increase in the number of visitors to the basilica in recent years, which remains around two million: critical mass in terms of capacity has perhaps been reached. 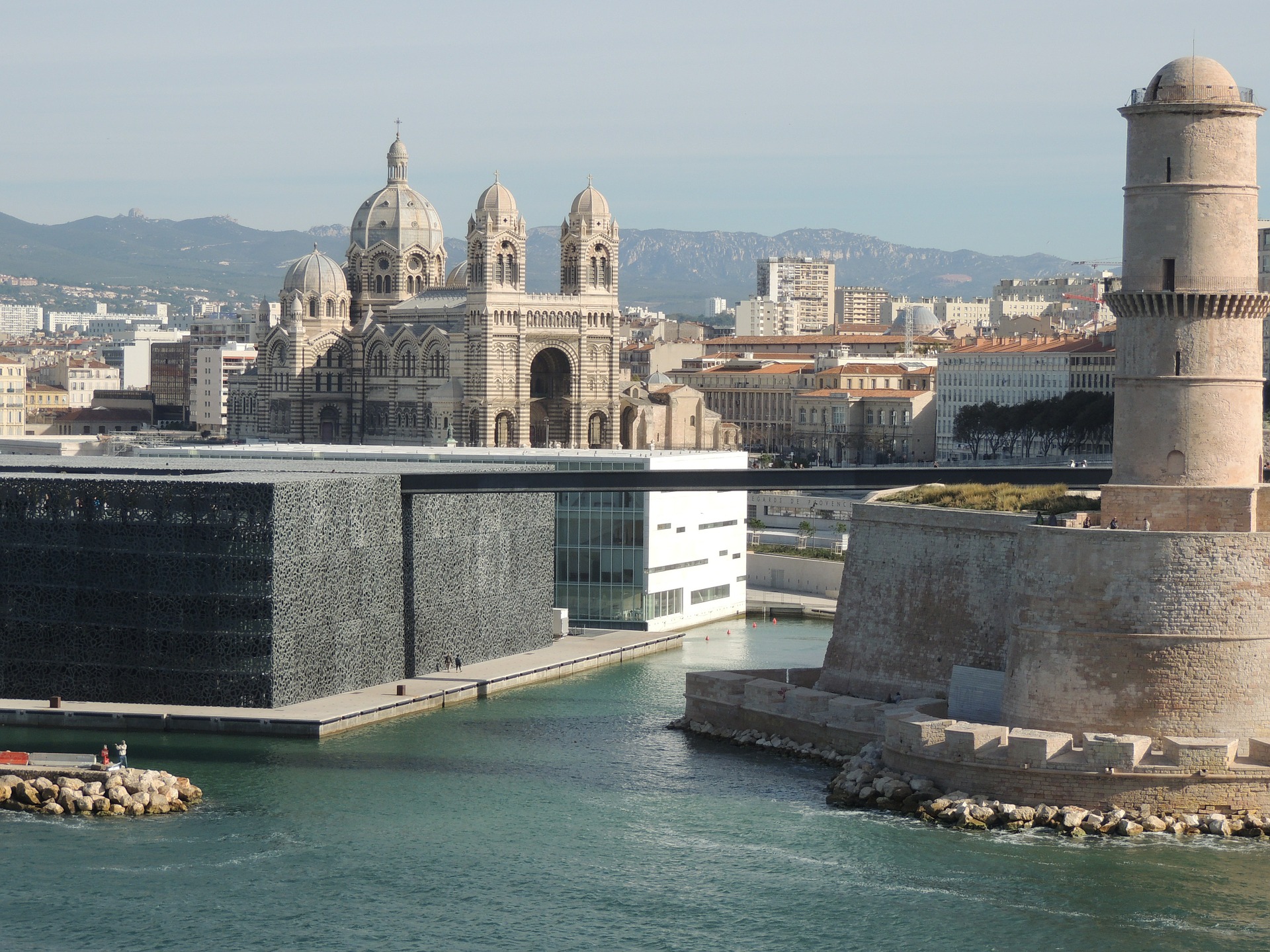