By MKG Consulting : Compared with the period from January to April 2018, the dynamics are less strong. However, average prices (ADR) increase (+ 1.5%), occupancy is stable (+0.2 pt) and RevPAR is positive at 1.8%. Austria, thanks to the excellent results of its capital, shows an occupancy increase by more than 4 points.

It’s the only country to have a double-digit RevPAR change (+ 14.4%) since the beginning of the year.
Belgium and Poland show an increase in occupancy of more than 1 point (1.6 points for Belgium and 1.2 points for Poland). For Belgium,
the activity increase is mainly related to the first three months of the year, through a stability in ADR, while for Poland, ADR are up (+ 1.8%).
The majority of other European countries have stable occupancy compared to 2018. It is mainly the pricing strategy that affects RevPAR.
Thus, we see that countries such as Germany, Luxembourg, the Czech Republic and Portugal record ADR increases ranging from +3.1%
for Portugal to +4.2% for both Luxembourg and the Czech Republic. The German market increase by 3.5%. The other countries posted
stable ADR, even slightly up (+ 1.4% for France). 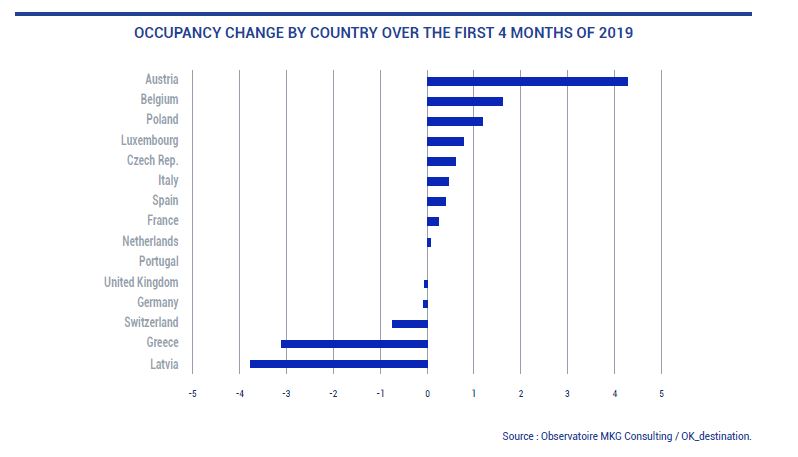 Among the major European cities, Munich posted the best performance with a RevPAR growth by more than 30%. The congress center
of the city has organized this year two exhibitions that usually take place every 2 or 3 years leading to a strong impact on the hotel
business. The BAU World’s Leading Trade Fair for Architecture, Materials and Systems, which took place from January 14 to 19, welcomed
250,000 visitors and the BAUMA World’s Leading Trade Fair for Construction Machinery, Building Material Machines, Mining Machines,
Construction Vehicles and Construction Equipment held from April 8 to 14, 2019, welcomed more than 600,000 visitors. The Austrian
capital has also organized many events including medical conferences in March and April 2019. These events enabled the hotel industry
to record a RevPAR grow by 17.1%, thanks to the combined increases in occupancy (+5.4 points) and ADR (+8.0%). For the other markets,
with the exception of Rome, which is down 1.5 points, occupancy rates are stable or slightly up. 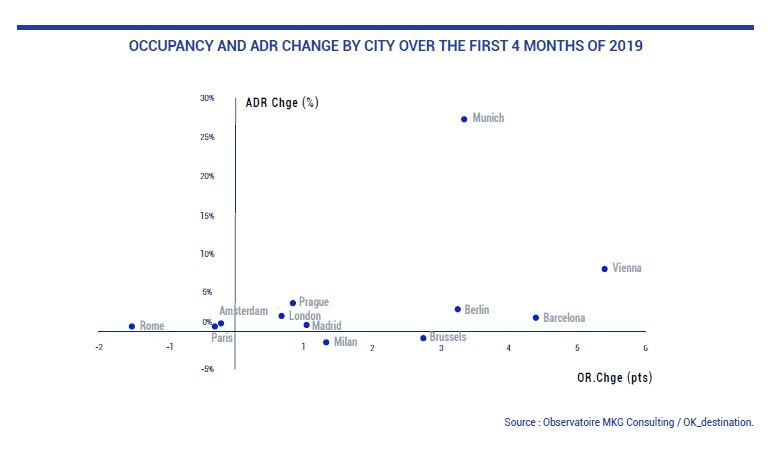 The French hotel industry has clearly undergone a slowdown since the end of 2018 and the beginning of the Yellow Vests movement.
This slowdown is felt mainly in Paris and Ile-de-France as well as in some cities such as Bordeaux, Toulouse or Nice. In these different
markets, the performance recorded during the weekend is down with notably more significant price discount than during the weekdays.
However, the results recorded in Province are increasing with a RevPAR which grow by 3.2%. The city of Lyon, which organized in January
the biennial show SIRHA which hosted a record number of 225,000 participants, is the only city to show a two-digit RevPAR growth (+
13.8%). Other cities like Marseille, Lille or Montpellier are also on a positive trend over the beginning of the year.

The outlook for the next few months is good, with Airshow in Paris in June and the Women’s World Cup taking place from June 7 to July
7 in 9 French cities. 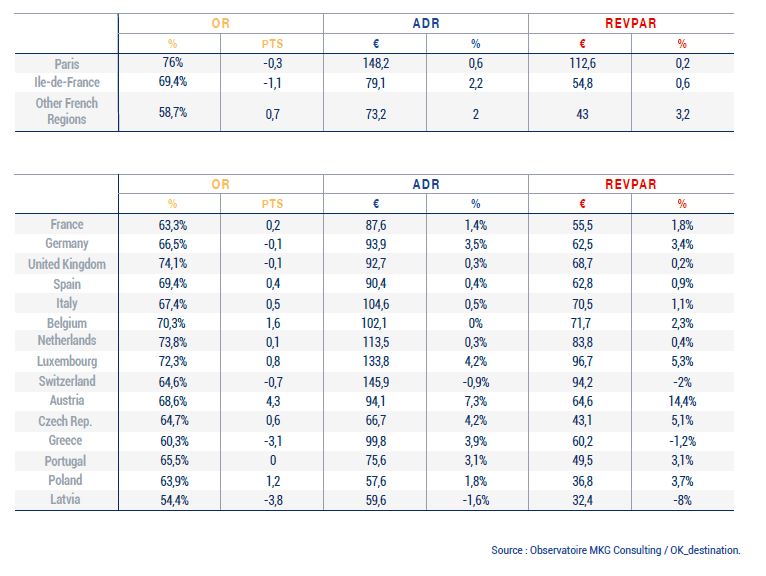