In our previous note[1] published at the end of October, we were already anticipating a contraction in activity in the services sector for the fourth quarter, in line with the trend in the hotel industry and, more generally, in the French economy. The tightening of restrictive measures in the major metropolitan areas had an immediate impact; in a context where companies showed as early as September that they would not be able to compensate for households in the current phase of economic recovery. Even though a tightening of constraints was to be expected, the announcement of the second lockdown felt more brutal than expected due to an extremely sharp deterioration in the health situation.

The first available data for the month of November indicate that activity will decline signiﬁcantly, but to a lesser extent than during the first lockdown, in the hotel sector as well as in the whole economy. The real issue now consists in making forecasts beyond the month of November. According to health experts, it appears that a four-week-long lockdown will not be sufﬁcient . Although December is not a decisive month for hotel businesses nationwide , it is a particularly important one for retail sales. Each additional week of lockdown will have an exponential impact on Q4 GDP. Thus, according to our estimations, the latter should contract by around 7% on a quarterly basis if health constraints loosen in mid-December. Otherwise, this figure will have to be adjusted downwards.

I-IMPACT OF THE LOCKDOWN ON HOTELS IN FRANCE & EUROPE

Prior to the lockdown that was triggered on the night of October 29-30, 2020, France’s hotel industry was more resilient than those of other European countries, as illustrated in the graph below.

EVOLUTION OF REVENUE PER AVAILABLE ROOM (REVPAR) IN 2020, IN EUROPE, BY COUNTRY (Evolution expressed in % compared to the same day of the year 2019)

This phenomenon can be explained:

EVOLUTION OF INCOME PER AVAILABLE ROOM (REVPAR) IN 2020 IN FRANCE, BY SEGMENT (Evolution expressed in % compared to the same day of the year 2019)

However, since the implementation of the lockdown, France has fallen back in line with its European peers and the drop of its RevPAR has become more pronounced. While the drop ranged between -45% and -60% per day at the end of October, as of November 1 it reached -82% compared to its 2019 level, and now seems to be stabilizing at around -75% to -80% per day.

The impact of this second lockdown is therefore significant, even if hotel activity still seems to be on a less strenuous path than in April, a month in which the income per room fell by an average of 96.5% per day.

This impact was particularly noticeable in the provinces, where the industry saw its income per room drop from -35% as of October 29 to -65% as of November 2. In Paris, where the hotel business was already losing more than 80% per day in October, the fall below the -90% per day threshold in November logically triggered a new wave of hotel closures.

II-IMMEDIATE IMPACT OF LOCKDOWN ON THE ENTIRE FRENCH ECONOMY

The resilience of the hotel business compared to the first lockdown illustrates a more general trend that has also been observed in the mobility data made available by Apple. It highlighted a return to the level of early May (end of the lockdown). 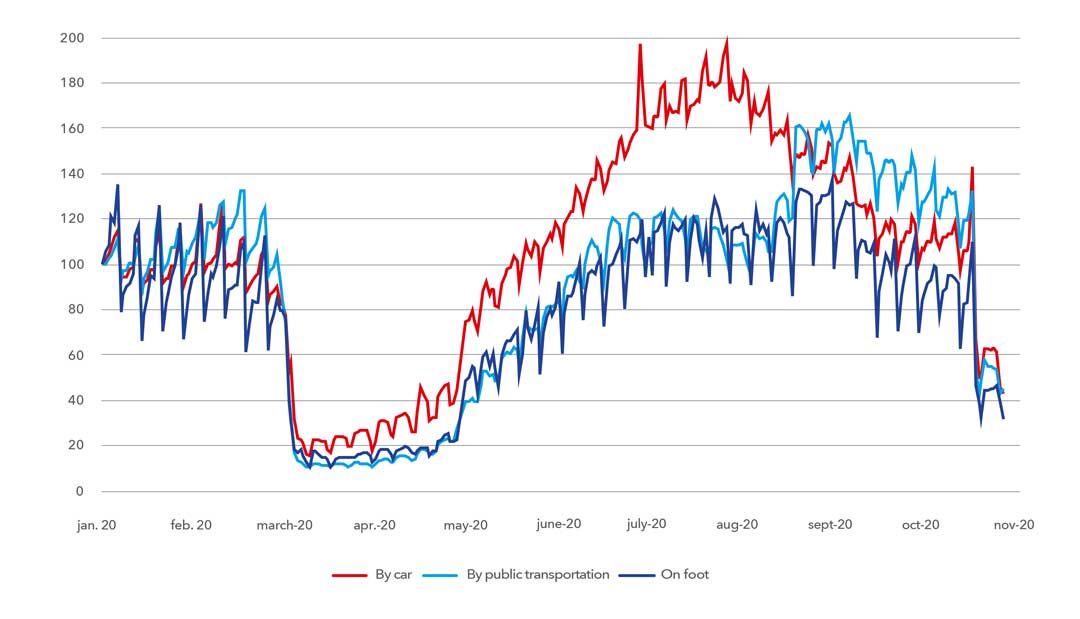 In this context, according to the Bank of France's first estimate, "the loss of GDP for a typical week of activity (compared to the normal level before the pandemic) would be around -12% in November, compared to -4% in October but -31% in April".

BANK OF FRANCE: ACTIVITY INDEX COMPARED TO STANDARD LEVELS PRIOR TO THE PANDEMIC 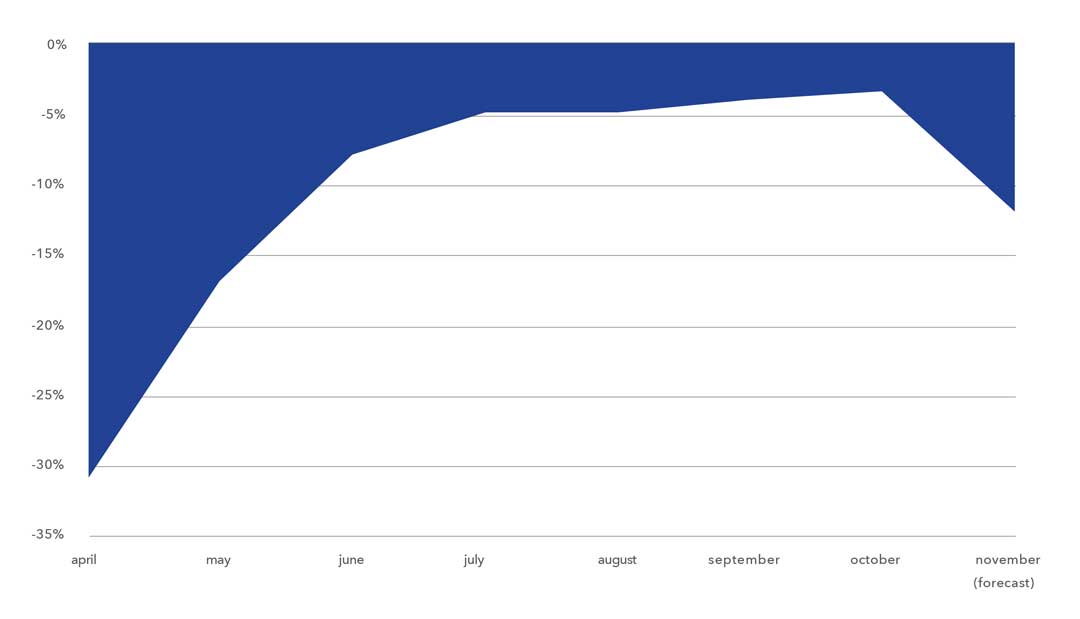 This contraction in the overall economy, which was less pronounced than the one observed in May (-17%), can be explained by several factors:

Although we must remain very cautious, the Bank of France's forecast of -12% (compared to the normal level before the pandemic) for the month of November seems consistent with other indicators that we monitor, in particular highway and airport trafﬁc, and electricity consumption.

III-FOCUS ON THE MONTH OF DECEMBER

For the French hotel industry, November and December are generally months of low activity, representing only 7.6% and 6.9% of annual revenue, respectively. However, there are important local nuances as we can observe below.

SHARE OF NOVEMBER AND DECEMBER IN THE FRENCH HOTEL INDUSTRY'S ANNUAL REVENUE, BY TYPE OF SPACE AND BY METRO AREA (as an average % of Annual Revenue per room over the period 2016-2019) 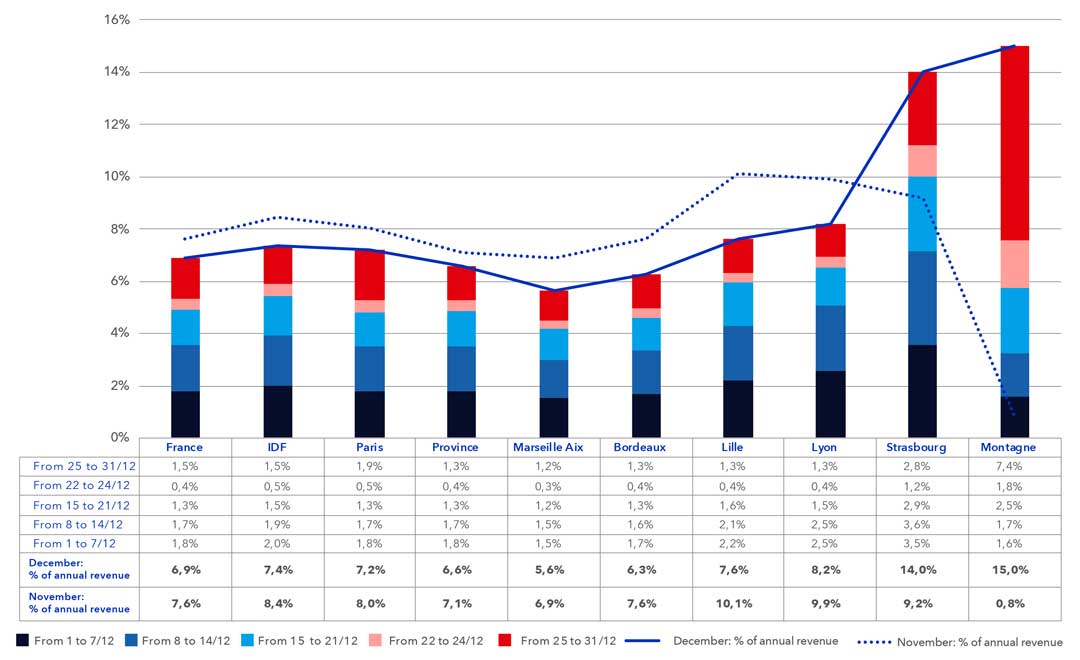 This is particularly the case in mountain destinations, where the month of November is marginal (0.8% of annual revenue) but where the month of December is particularly important (15% of annual revenue): this corresponds to the beginning of the winter season and the opening of the ski resorts and then to the winter vacations, particularly during the second half of December. More specifically, the week from Christmas to New Year's Eve (December 25 to 31) alone represents nearly half of the monthly revenue, i.e. 7.4% of the annual revenue of the mountain hotel industry.

The last week of December is also usually a little more active than the rest of the month for the Parisian hotels thanks to demand from international clients, but due to mobility restrictions, they will be less likely to come over this year. However, the month of December as a whole remains globally not that important for the capital's hotel industry (7.6% of annual revenue).

On the other hand, December is usually a month that matters more in Lyon (8.2% of annual sales) and particularly in Strasbourg (14%). However, rather than the Christmas vacations the key moment is the first fortnight of December. This can be explained by the events that usually take place during this period, including the Festival of Lights and Pollutec (a biennial trade show) in Lyon, and the Christmas markets and sessions of the European Parliament in Strasbourg.

These two metropolises will therefore be more affected by the 2nd lockdown which is now underway, while the impact on the hotel industry will remain moderate in coastal cities like Marseille and the Provinces as a whole, because in these areas the high season is centered around the summer and/or periods of strong business activity. However, for the economy as a whole and for retail sales in particular, December is a key month.

According to a study published by INSEE last year, "with the holidays of the end of the year, December is the most important month". Concretely, in 2018, it represented "10% of the sector's annual sales volume, a stable share in recent years". Nevertheless, some segments are much more exposed, such as games and toys stores (28% in 2018).

Under these conditions, the current restrictive measures will have a greater impact on the economy from December onwards, and if they are maintained beyond mid-December, any catch-up phenomenon will be reduced, leading to further downward revisions of the outlook for Q4.

3This is not necessarily true in some regions that are heavily dependent on the ski season.

This document constitutes a note that gives an opinion on the direction of economic trends. It presents a combined perspective on macroeconomics and the tourism industry that resulted from the analysis of its two authors, who bring to the table a solid and recognized expertise as well as specific and exclusive indicators.