In our previous note, we emphasized that French growth would rebound significantly in the third quarter following the end of the lockdown. This is essentially due to an increase in household spending, which benefited the tourism sector especially during the summer vacations. Nevertheless, as we also pointed out, the economic recovery showed signs of running out of breath from mid-August onwards following renewed concern about the health situation and the sluggish demand observed by many companies operating in the service sector.

This analysis is also available on https://www.christophe-barraud.com/en/france-towards-a-relapse-in-growth-for-the-fourth-quarter

The latest figures for September confirmed our fears of a downturn in activity for the end of the year. France has been subject to new restrictions (such as a mandatory quarantine when returning home) imposed by various European countries such as the United Kingdom, Belgium and Germany, but has also been forced to tighten the rules in several key urban areas such as Marseilles and Paris. These measures have already led INSEE to adjust downwards (from +1% to 0%) its growth prospects for the 4th quarter. However, further downward revisions are likely to occur in a context where companies do not seem to be able to become the new engines of the recovery phase, due to growing uncertainty about the short- and medium-term outlooks (new epidemic wave, wave of bankruptcies, Hard Brexit, US elections...).

I-THE TREND REVERSAL HAS ALREADY BEEN CONFIRMED IN SEPTEMBER

After encouraging results during the summer vacations (July/August), the first available data for September turned out to be disappointing, especially for the service sector. Indeed, the monthly index released by Markit2 fell by 4 points in September to 47.5, its first decline since May. According to the report, “activity contracted in five of the six sub-sectors covered by the survey, with the only growth recorded in the financial services sector, where activity rose sharply compared to August”. In this context, the composite index also slipped below the expansion threshold of 50, reaching 48.5 (the lowest since May). This turnaround can be explained by the increase of new confirmed cases of Covid-19 and the gradual tightening of restrictive measures in France and Europe.

MONTHLY EVOLUTION OF THE REVENUE PER ROOM (REVPAR*) IN HOTELS BY COUNTRY (Evolution in % compared to the same month in 2019, expressed in built rooms)

Sources: MKG Consulting, christophe-barraud.com / *whether the hotels reopened or not.

A report published by the Economic Analysis Council3 (EAC) on October 12 confirmed this turnaround in the restaurant and leisure sectors.

FRANCE: CONSUMPTION IN THE RESTAURANT AND LEISURE SECTORS 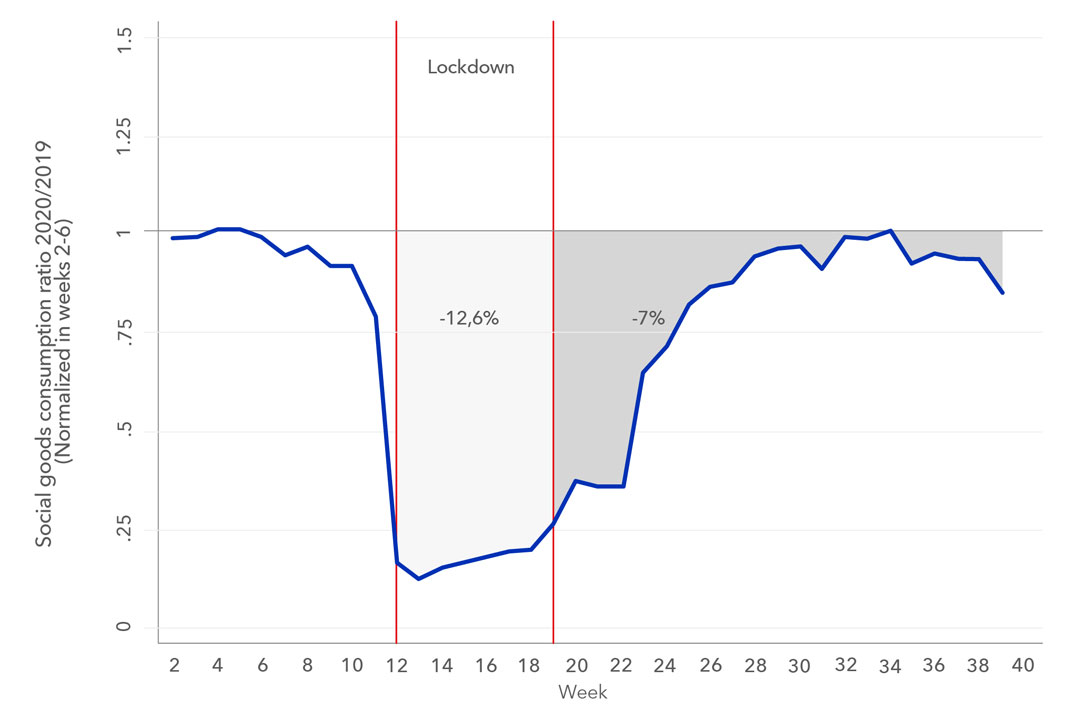 This phenomenon has also been observed through the figures we have for the hospitality sector, with a relapse of the RevPAR4 in September in all European countries. France, whose recovery had been particularly strong over the summer, was no exception: it lost its lead and aligned itself with Germany.

At the French and European level, the hotel industry therefore experienced a very poor September, which is quite an issue considering this month usually represents 11.3% of hotels’ annual turnover. The combined presence of business customers mobilizing for the back-to-business season and leisure customers prolonging the pleasure of summer normally makes it the second most important month of the year for the sector. The economic impact of the slowdown was thus significant as early as September.

This trend is set to continue, as individual business customers logically limit their travel in accordance to health regulations, while events are at a standstill and will remain so for a long time, as highlighted in Paris by the cancellation of the Agriculture Show (February-March 2021) and in Lyon by the postponement of the SIRHA from January to June 2021.

II-THE DOWNTURN IN ACTIVITY WILL CONTINUE IN THE 4TH QUARTER

On the economic front, despite this disappointing month of September, the GDP for the 3rd quarter can be expected to mark an unprecedented rebound (around +15% on a quarterly basis). However, as we have already mentioned, we are entering a critical period where the risk of a relapse in activity is very high. In this regard, we may note that, at the time of the publication of its economic note5 of October 6, INSEE chose to revise its growth forecast for the 4th quarter down to 0% (from +1% previously).

At the same time, many bankruptcies are already expected for October. As Les Echos6 pointed out, “since August 24, companies that cannot pay their bills have 45 days to declare themselves in default at the Commercial Court”, which should result in a rise in business failures from October onwards and thus an increase in unemployment.

MARSEILLES: DAILY CHANGE IN HOTELS’ OCCUPANCY RATES (OR), AVERAGE DAILY RATES (ADR) AND REVENUE PER ROOM (REVPAR) (Evolution in % compared to the same weekday in 2019)

DAILY CHANGE IN HOTELS’ REVENUE PER ROOM IN MARSEILLES AND OTHER REGIONS (EXCLUDING ILE-DE-FRANCE), FROM JULY TO MID-OCTOBER 2020 (Evolution in % compared to the same day of the week in 2019)

More recently, the announced curfew, involving the closing of bars and restaurants from 9pm in the Ile-de-France region and in 8 major cities, should also weigh on tourist activity. The case of Marseilles, where the restrictions applied to bars  and restaurants have been fluctuating in recent weeks, offers some insight into prospects in the areas concerned: The recovery of summer activity, which had been strong in Marseilles, was thus very quickly stopped by announcements of restrictions affecting bars and restaurants, making the city an unintentional textbook case. The observation is that after a few weeks, the gap between the trend in Marseilles and the national standards in the regions shows a specific RevPAR loss peaking at -17% during the early closing period (then defined as 11pm), and at -23% during full shutdown of restaurants. The specific impact of the curfew in the cities concerned can therefore be estimated as an additional cut(relative to standards in other Province areas) by around 20 percentage points of 2019 RevPAR.

Consequently, the new restriction measures, applicable for at least 6 weeks, imply a relapse of activity in the concerned areas (more than 54 departments) and, given their importance, at the national level. Likewise, other areas are likely to suffer from a similar fate in coming weeks, as the All Saints’ Day vacations are pushing tourists to move to areas that have been spared so far, favoring the circulation of the virus. It should also be noted that the fl ash estimate of the PMI for the month of October8 showed a sharper contraction than in September (47.5 against 48.5 previously). 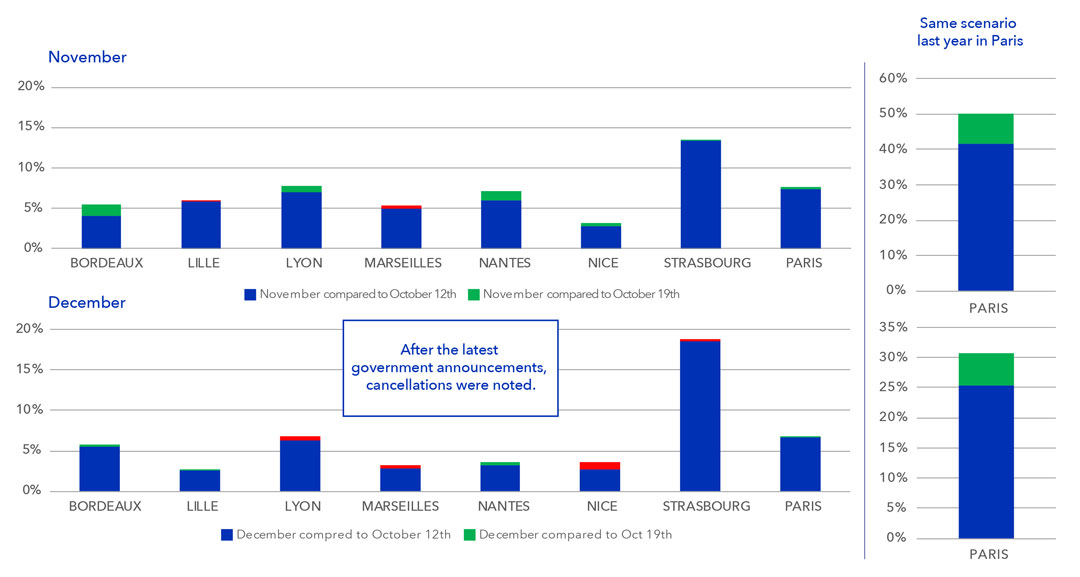 In a context where visibility will remain limited in the short term for companies due to other uncertainties, tied in particular to Brexit or the US elections, a contraction in the hotel business and more broadly in the services sector now seems to be the central scenario for the fourth quarter. Given the weight of services in the French economy, GDP growth will also contract, as the Minister of the Economy has already pointed out in his interview with Le Figaro9. This risk was already factored in by Bercy, the French economy and fi nance ministry, which forecast a 10% drop in GDP for 2020, a figure that left room for a relapse in the 4th quarter.

7This is a “specific” impact that must be added to the general trend in other areas; for example, if Income per available room dropped by 50% in the provinces in cities not affected by curfew, then it would drop by about 20% + 50% = 70% in the concerned cities.