Austria is a major tourist destination: 29.5 million international arrivals in 2017 for 106 million nights (source: WTO). This has been true for many years: in 2009 Austria represented 4.6% of international arrivals in Europe; nearly 10 years later, this figure practically hasn’t changed and was 4.39% in 2017. So why Austria? What more is there to say about this country that is an old standard of tourism? The answer is simple: plenty. Recently Austria realized impressive results: double digit growth in RevPAR, soaring occupancy rates, a number of tourists up by 5% in 2017... does Austria still hide surprises? FOCUS ON PERFORMANCES

An acceleration in the RevPAR: gratifying results

Austria recorded a very strong increase in Revenue Per Available Room in 2018: an increase of 7.9% over the year. The third highest score in 2018, no less. And in front is Latvia (10.8%), which is currently catching up and creating a destination, then Belgium (8.5%) which also rises in the year following the attacks (tourists from France on the rise, a return to a more favorable image). Such improved margins attract attention, especially when no event like the Olympics or World Cup is there to attract worldwide attention. This becomes a two-fold problem when the RevPAR is put in perspective with national politics: since 2018 the country has been governed by an alliance between the right and the extreme right. Islamophobic messages and attacks against Brussels are flourishing. Which is not helpful to the destination’s welcoming image... And yet: the RevPAR is there.

This margin is mainly due to a rise in prices, which climbed 6% over the year to 97.50 euros. The occupancy rate increased by only 1.2 points over the year to flirt with an annual occupancy rate of nearly 80%. Only the United Kingdom and the Netherlands are doing better in Europe over the same period. Austria climbed onto the podium: and since then the crisis stayed at bay. The results are even better on a monthly basis:

Austria ranks first in terms of RevPAR growth and second in terms of average daily rate. November is particularly impressive: 25.2% increase in RevPAR in November 2018 compared to the same month the year before, the increase continues in December with 21.1%. Over a shorter period, it is no longer the price that drives the margin but the occupancy rate. This is a sign of the market’s good health, with occupancy up by 8.3 points, 6.3 points and 6.2 points respectively for November, December and January. This acceleration in added value could already be seen in the summer season, with the first signs of an increase in RevPAR with performance in September 2018 13.3% higher than in September 2017, but above all there was a clear increase in OR in May and June 2017 for instance. 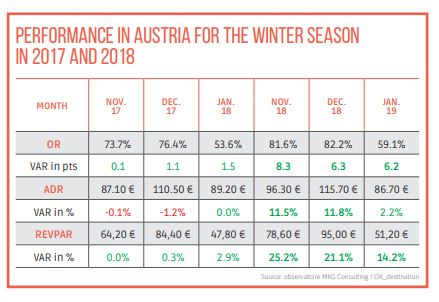 A certain logic is beginning to appear: Increases in OR in 2017, for example in July 2017, followed by an increase in average daily rate at the end of 2018 pulling margins up. This trend will undoubtedly continue in 2019, at least at the beginning of the year: it is a phenomenon of bringing prices back up, and all the more stable since ORs continue to grow. Whence a very solid market profile. This sequence, OR then increase in ADR followed by the RevPAR, is all the more striking if we look at the curves over the last 10 years: 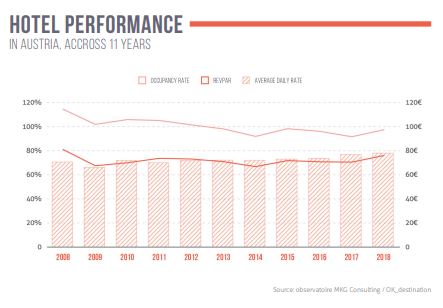 The profile is clear: the price is stable, even down slightly compared to 2008, which is pre-crisis and the year of the Euro of football moreover considering inflation. A contrario, the OR is up,as is the number of international tourist arrivals in the country. Is the strategy to lower prices? In any case the disconnection between the average daily rate compared to occupancy rate might suggest that: a less expensive destination, to lessen the luxury aspect, thereby making it more attractive. It’s almost a draught effect. But one that stopped in 2018, with the first example of an increase in average daily rates and then the RevPAR. It remains to be seen what 2019 will bring: renewed cause and effect between price and demand in the quest for a margin, or continue to improve the OR, attempt to optimize occupancy before increasing prices and margins. Evidently the second option has been elected, as the increase in prices has already begun. These figures must be put into perspective as they come from corporate chains, whereas Austria is one of the countries that still has independent hoteliers. That said: the analysis remains true and precise for chain hotels, and in terms of trend and dynamic for the supply overall. 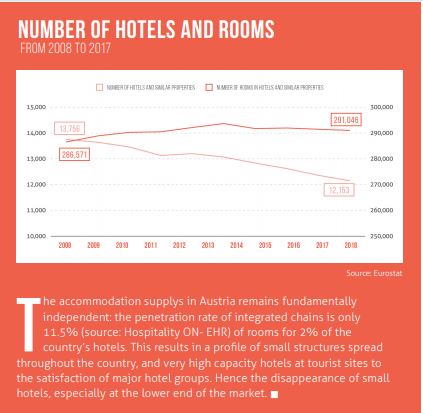