The year 2020 was exceptional in a myriad of ways for the French hotel industry, which was hit hard by the COVID-19 epidemic. While the dynamics have changed considerably from one month to the next, depending on the product range and from one region to another, what conclusions can be drawn?

Throughout the year 2020, the French hotel industry recorded highly volatile levels of activity, with fluctuations that logically followed the evolution of the COVID-19 epidemic and the implementation of the government’s health measures.

While the dynamics sometimes changed abruptly from one day to the next, over the full year the following phases stand out:

But not all hotels are affected the same: depending on their segment, the impact of the health and economic crisis of 2020 has varied. The crisis once again demonstrated the greater resilience of the economic segments relative to the higher categories.

Indeed, the business of the latter relies much more on international customers (especially long-haul), on exhibitions & congresses... In the absence of the usual drivers of demand, the majority of high-end & luxury establishments were forced to close: only 8% of them were open in April, 39% in November, and even nearly one-fifth of the supply never reopened during the year due to a lack of activity.

Conversely, the budget and economic segments are traditionally the most resilient in times of crisis, and the COVID-19 crisis is no exception (even if the scale of the decline in activity remains considerable):

On the one hand, more budget and economy hotels have remained open throughout the year, sometimes even during periods of lockdown, to accommodate workers on the "front line" of the fight against the epidemic (healthcare personnel, transportation/logistics clients, etc.) and/or specific groups (families of patients, patients in quarantine, the poorly housed, etc.).

This enabled entry-level hotels to partially offset the considerable drop in revenue over the year. Nevertheless, this still amounted to -43.5% in budget hotels and -54.2% in economy hotels. The midscale hotel sector (-62.2%) is close to the average, while high-end & luxury hotels plunged, losing ¾ (-73.7%) of their revenue.

ANNUAL EVOLUTION OF HOTEL INDICATORS BY SEGMENT IN 2020

Similarly, not all jurisdictions have experienced the pandemic to the same degree.

Ile de France, a heavyweight on the national scale since it normally represents no less than 38% of the French hotel industry's turnover, will record the biggest loss (-72.8%) in 2020. Paris and the Ile de France region, whose clientele is highly oriented towards business tourism and international clients, have seen their RevPAR fall more sharply (-77.8% in Paris and -64.7% in the Ile de France region outside Paris) due to the economic slowdown and the lack of mobility.

Conversely, the Province was much more resilient than the Ile-de-France region and the capital. Indeed, the regions were able to take advantage of the significant size of the French domestic market to maintain a certain minimum threshold of activity, particularly during the summer and to a lesser extent in the autumn.

WEIGHT OF EACH REGION IN THE NATIONAL TURNOVER IN 2019

ANNUAL EVOLUTION OF HOTEL INDICATORS BY REGION IN 2020 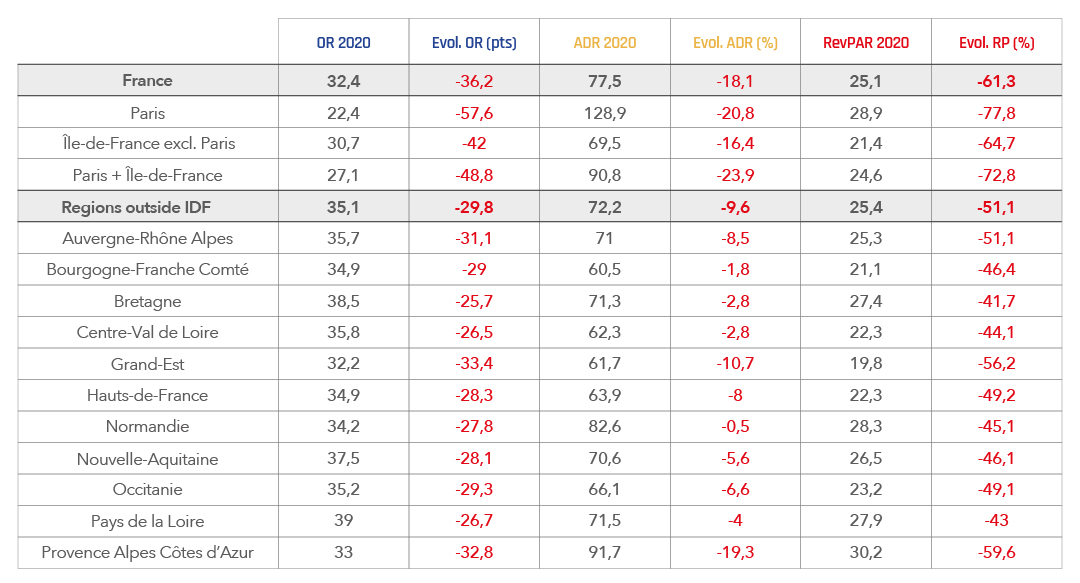 However, there are also significant differences between regions. The fact that the PACA region has not been able to count on its usually very large foreign clientele makes it the second most affected region in terms of decline of annual revenue (-59.6%). It was followed by the Grand Est (-56.2%) which suffered from the earlier and more intense arrival of the COVID-19 epidemic, congress and/or travel cancellations (particularly those usually linked to the activity of the European Parliament in Strasbourg), and the Christmas markets at the end of the year. Auvergne-Rhône-Alpes, also a key market for the French hotel industry (12% of turnover, like PACA) closed the podium with a decline of -51.1%, and has already started 2021 on a difficult footing between the cancellation of business events in its major cities and the closure of ski lifts in the Alps.

Conversely, some regions whose exposure to international demand is usually more limited resisted the general decline better, such as the Centre-Val de Loire region (-44.1%). But it was the Pays de la Loire (-43%) and Brittany (-41.7%) regions that posted the "best" performance of the year, supported in particular by the activity of hotels along their coasts.

The summer season, marked by numerous hotel reopenings and significant domestic demand, proved to be a lifesaver for the coastal resorts. This is also true on the Mediterranean coast, where the resurgence in hotel occupancy has slightly mitigated the impact of the lack of foreign clientele. But it is above all the west coast, from the Atlantic coast to Brittany, that stands out clearly as the anchor of a French hotel industry that weathered the storm in 2020, with occupancy rates back above 80% as of August and still above 50% in October:

MONTHLY OCCUPANCY RATE BY ZONE IN 2020

EVOLUTION OF HOTEL TURNOVER BY CONURBATION IN 2020 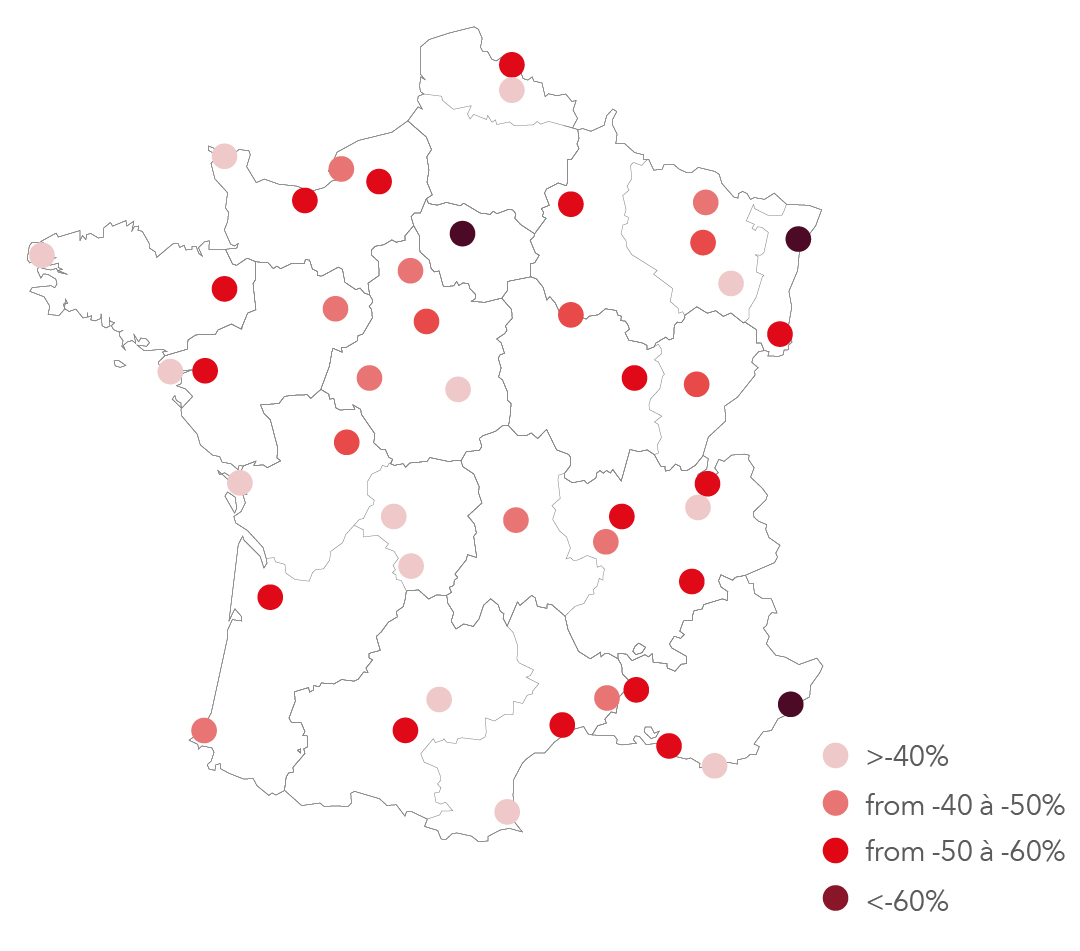 Conversely, the secondary urban areas, less exposed to international demand and/or the high-end & luxury market, held up better. The prize goes to cities hosting ports and/or shipyards, such as La Rochelle (-32.1%), where the income per available room may even have increased at certain times with the return to port of many liners that were under repair during this period of inactivity and/or with the quarantine of crews ashore.

Driven by the size of its domestic market (domestic customers), coastlines and their network of medium-sized cities is where the hotel industry held up better, France thus is positioning itself as the most resilient country on the European continent. We could also speak of a Franco-German tandem, since the two countries have experienced the most moderate declines: -61.3% in France, -63.8% in Germany.

Conversely, the European countries most dependent on international customers have been particularly affected by the crisis, with RevPAR falling by 75.2% in Spain, 77.4% in Greece, and as much as 80.4% in Hungary and 83.3% in the Czechia, the biggest declines on the continent.

Thus, the loss of hotel activity in 2020 does not appear to be directly correlated to the severity of the national or local health situation, but rather to the exposure of hotel markets to international demand. Countries with a large domestic market such as France (where 64.8% of overnight stays are generated by domestic tourists) or Germany (76.3% of domestic tourists) have suffered a relatively smaller decline in activity than countries such as Greece, Spain or Portugal.

But other elements are also determining factors at the local or national level. Indeed, the hotel industry is part of a broader ecosystem of interdependence with other sectors, such as transportation (air, rail, urban networks, etc.), culture, events (business and leisure) and, of course, restaurants.

For example, the top 20 European cities, in the ICCA's 2019 ranking of the main convention destinations, saw their revenues fall by an average of 79.4% in 2020, reflecting the major impact of the lack of events on the hotel industry. 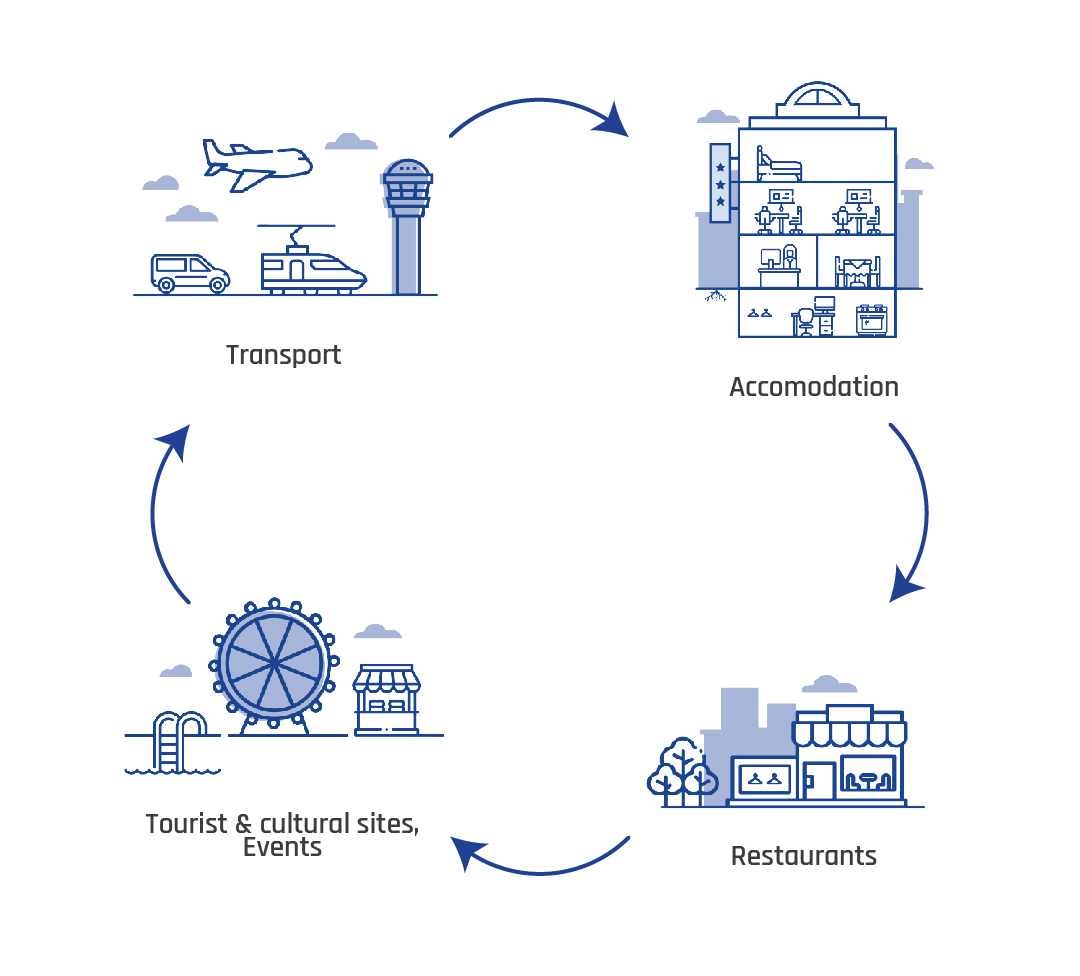 The exceptional situation experienced by Marseilles, the first city to "experiment" with a curfew in September, also helps to identify the impact of a curfew that had become severe to the point of leading to restaurant closures:

DAY-BY-DAY CHANGE IN REVENUE PER ROOM (REVPAR) FOR HOTELS, IN MARSEILLE AND REGIONS OUTSIDE THE ILE-DE-FRANCE, FROM JULY TO MID-OCTOBER 2020 (% change relative to the same weekday in 2019)

While everyone else in France was still circulating normally, the curfew and then the closure of restaurants alone had wiped out nearly one-fifth of the revenue per room, as illustrated by the gap that had appeared between Marseille and the provincial average. This observation is further delaying the prospects for recovery expected by hotel professionals in 2021, given the nationwide application of a curfew from 6 p.m. at the end of January.

However, with the notable exception of mountain ski resorts where the first quarter is key for annual activity, elsewhere and nationally the first months of the year are not the most decisive in tourism and hotel activity:

MONTHLY SHARES OF THE 2019 ANNUAL REVENUE OF THE HOTEL INDUSTRY IN FRANCE, BY TYPE OF TERRITORY

Thus, on a national scale, it is rather the period from March to October that is important for hotel professionals. Between now and the beginning of 2021, they will have to be patient and rely on the measures that are now in place (partial unemployment, state-guaranteed loans) or that have been recently announced by the government, such as the 70% coverage of fixed costs.

Vanguélis Panayotis, CEO of MKG Consulting, comments: "All hospitality professionals were relieved to turn the page on 2020, a year that will remain engraved in our collective memories. Having to close the doors of our hotels, to record a fall in activity of such a magnitude, these are unprecedented events!

But while we must now face this existential crisis collectively to overcome it in the coming weeks, we must not lose sight of the fact that the medium and long-term fundamentals remain solidly anchored and offer the sector hope for recovery. Moreover, the hotel industry has always shown its ability to bounce back quickly after sudden interruptions in its activity, as it did very close to us after the shock of the terrorist attacks in Paris in 2015."

In fact, the COVID-19 crisis, in contrast to an economic and financial crisis like the one in 2008, actually generated a savings surplus among households. This available additional resource, combined with the irrepressible desire to travel after long periods of travel restrictions, gives hope to professionals in the sector.

But at a time when a global race is underway between vaccination campaigns and the spread of new variants, the challenge of 2021 will be to determine when this recovery can begin.