Following the 13th strike in the season, MKG Consulting draws up a new analysis of the impact of the strikes on France’s hotel industry.

The analysis of occupancy rates indicates that the drop in occupancy is fairly homogeneous throughout the territory. Thus, the difference observed over the months of April and May between strike days and non-strike days is between 2 and 4 points (2.4 points for the provinces, 3.1 points for Ile-de-France and 4.4 points for Paris Intra-Muros).

The consequence of these strikes was a marked slowdown in activity, whereas since the beginning of the year, hoteliers had seen a marked improvement in their performance (particularly in Paris and the Ile-de-France region).

Change in number of visitors since the beginning of the year 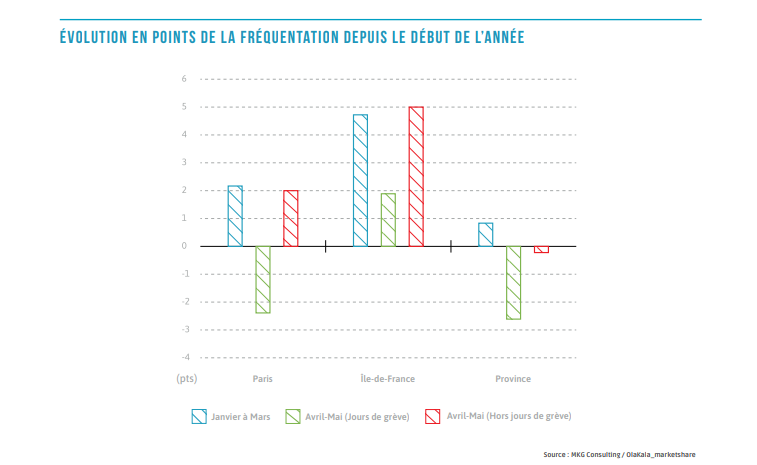 In the end, for the two months impacted by the strike, occupancy on the French hotel market was stable (+0.3 points), whereas in the first quarter of the year it increased by more than 2 points.

However, in the provinces, the impact of strikes is very different depending on the area. Regions that are heavily dependent on rail transport experienced more significant decreases in passenger numbers and thus a stronger impact on occupancy than those where trains are not necessarily the preferred means of transport for travel.

Thus, in the ranking of regions with the largest difference between strike days and non-strike days, the Grand-Est region leads with a differential of more than 4 points. Next come the Hauts-de-France and Normandy regions, which have differentials of 3.9 points and 3.7 points respectively. 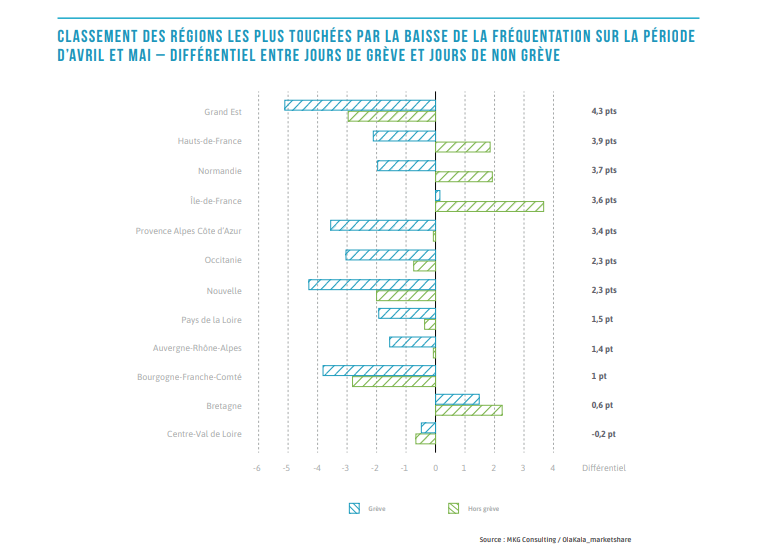 The Ile-de-France region, which posted record occupancy in the first quarter, showed a marked slowdown in April and May with a differential of 3.6 points.

The PACA, Occitania and New-Aquitaine regions, destinations that are favorites of the French during the Easter and May holidays, were strongly impacted during the weekends.

The consequences of this strike are highly detrimental to the French hotel business. Over the months of April and May, it is estimated that the shortfall for the profession overall is more than 100 million euros. If the conflict were to last until the summer, it could have even greater consequences, particularly for hoteliers located on the coasts of France and in highly touristic areas and would thus further tarnish the image of France's tourism sector for international customers.