How can this territory, which can offer many proposals to a variety of targets, be better irrigated? What kind of sustainable tourism in Île-de-France? How to develop the resilience of the destination, which is particularly affected by the consequences of the crisis linked to COVID-9, since "only" 20 million visitors are expected in 2020, compared with the more than 50 million who visited the capital region in 2019? What is the place of a hotel, restaurant, leisure or conference site in this ecosystem?

THEMATIC SUPPLY TO STRUCTURE THE OFFER AND DISTRIBUTE FLOWS

The development of tourism activities with strong themes is a real factor in federating the stakeholders, structuring the offer and promoting the destinations and products concerned. Several themes are put forward by the local authorities:

The first strong theme to have been worked on to structure the offer was Impressionism, born of a Destination Contract signed between the Île-de-France and Normandy regions, a logic of territory seen from a different angle where one sticks to a destination outside its administrative boundaries. From Moret sur Loing to Le Havre, the landscapes immortalised by the Impressionist painters offer opportunities for promotion and development. 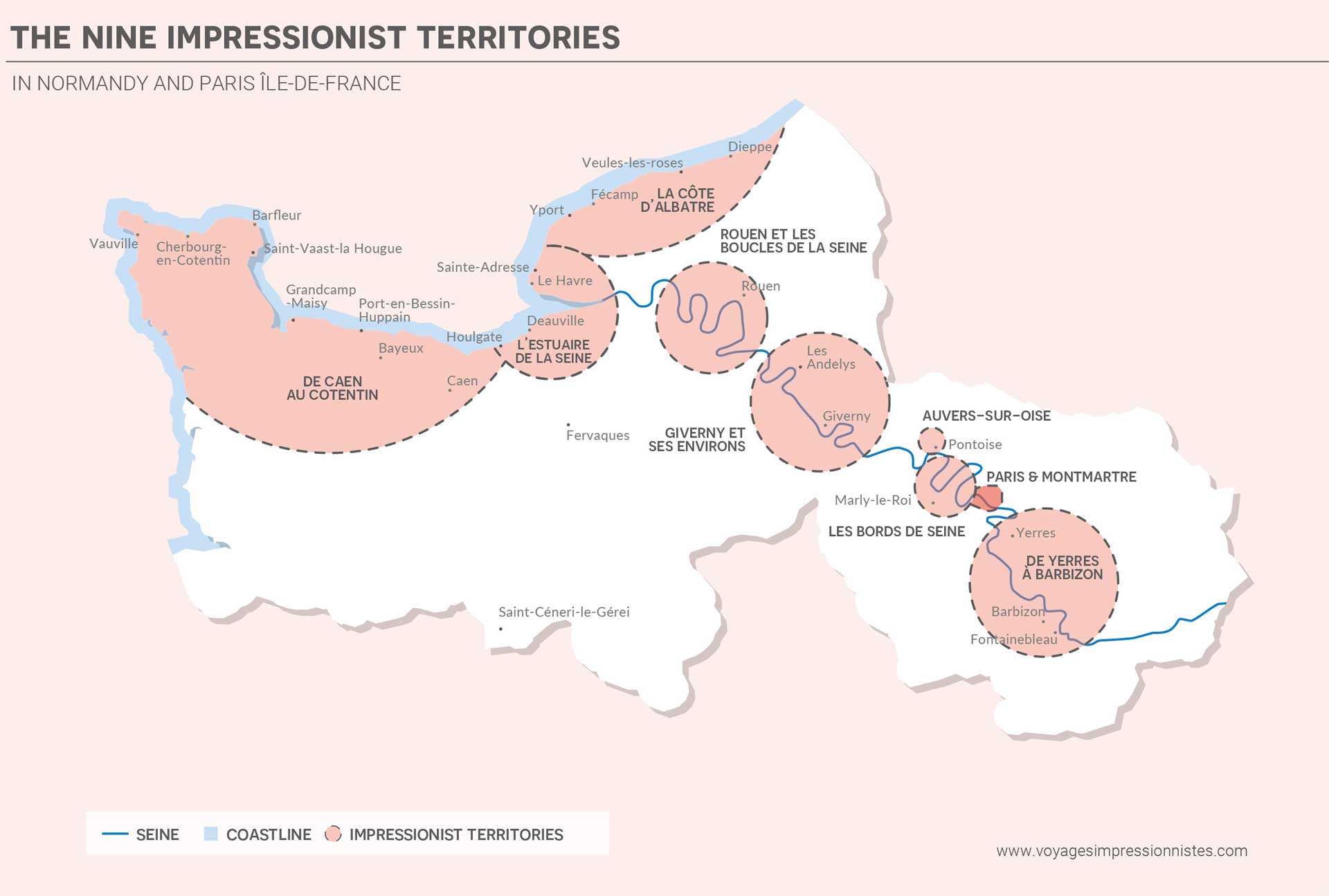 Impressionism is a strong cultural and artistic marker of France and the Normandy and Paris Île-de-France destinations. The tourist products linked to this theme attract a clientele of curious, nostalgic, dreamers and enthusiasts in the footsteps of emblematic painters such as Monet, Van Gogh or even Pissarro and Renoir who have left their mark and frozen in time on the still-preserved landscapes of Paris Region and Normandy. This theme attracts, builds loyalty and fills with wonder categories of customers with high added value for the areas concerned.

10 years after the first Normandy Impressionism Festival, which attracted 1 million visitors, 5 years of joint work have been devoted to:

This common framework brings together:

A broad spectrum of actors federated around a structuring theme which has seen the birth of new offers.

In 2023 and 2024, Paris and Île-de- France will host two major international competitions. The first is the Rugby World Cup from 8 September to 21 October 2023, a competition that will bring activity to the nine cities that will host the matches and the 20 teams.

Bordeaux, Le Grand Paris and the Stade de France in Saint-Denis, Lyon, Marseille, Nantes, Nice, Toulouse, Saint-Etienne and Villeneuve-d'Ascq can expect a saturated market during the match periods and a consequent RevPAR. The offer of collaborative accommodation will nevertheless be worth watching. With matches being held at the Stade de France, the Île-de-France region will be able to benefit from the presence of players, staff and also French and foreign fans to fill its accommodation, bars and restaurants.

Another international event with strong repercussions will be the Olympic and Paralympic Games from 26 July to 11 August 2024 hosted in Île-de-France. The events will be held from the hill of Elancourt in the west for the mountain biking events, to the Île de Loisirs de Vaires sur Marne in the east for the white-water events. To the north the aquatic centre of Aulnay-sous-Bois will host the swimming training sessions.

The destination will be transformed in some of its components, including for its inhabitants, who will then be able to benefit from the facilities deployed for the competition, such as the Media Cluster on the communes of Dugny, Le Bourget and La Courneuve, or the Athletes' Village built on the communes of Saint-Denis, Saint- Ouen-sur-Seine and L'Île-Saint-Denis.

These infrastructures are backed by a large-scale project that is still in the news: the Grand Paris Express. The arrival of the Noisy Champs hub to the east should bring the white-water events closer to the Capital, just as improved airport connections should change the experience of international visitors arriving at their destination by air. The international accessibility of Paris and its region is indeed one of the black spots in terms of customer satisfaction, whether it be in terms of public transport or taxis, with service levels that are far from approaching the standards of other European metropolitan destinations. 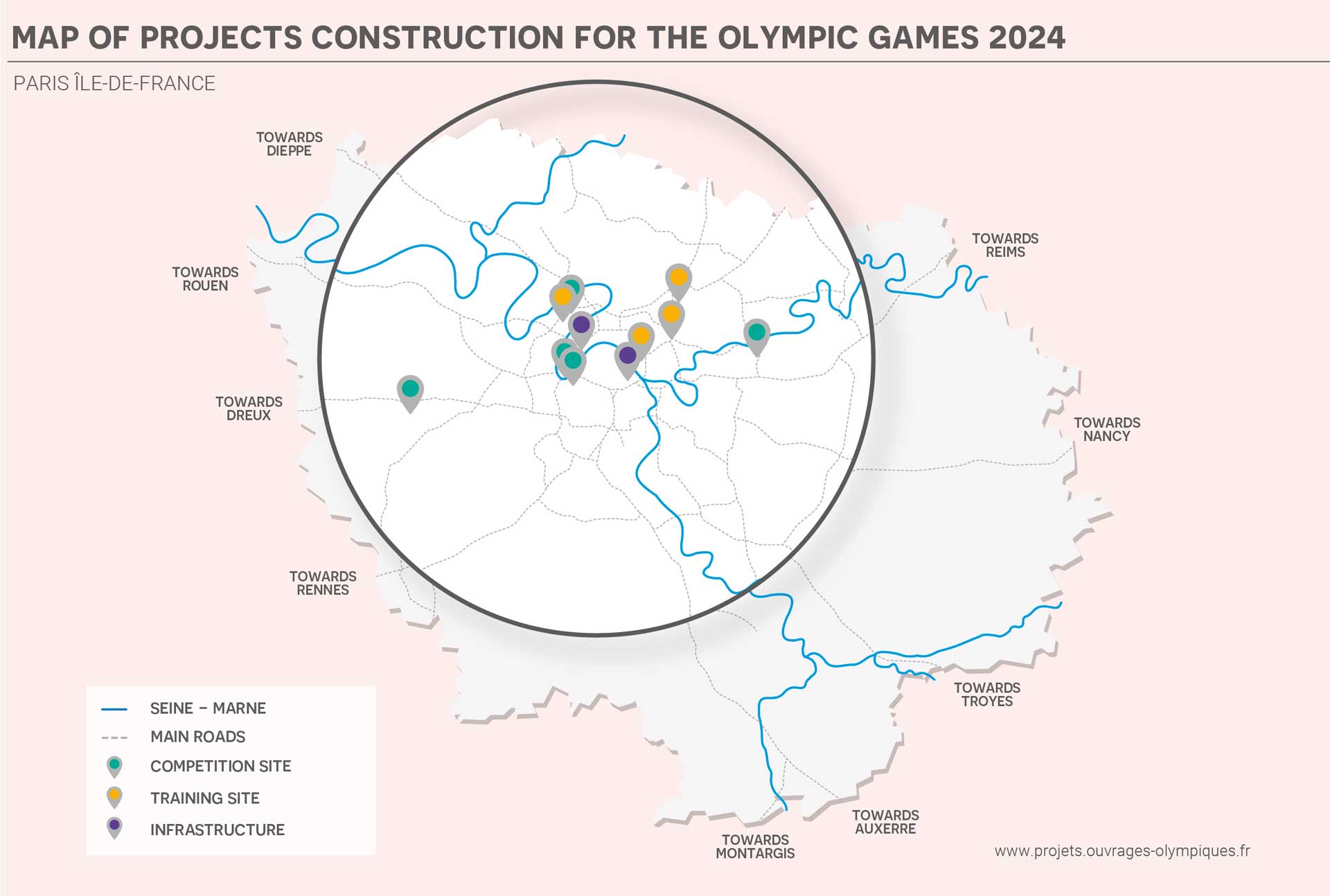 These two world events are a real window of visibility for the international destination and an opportunity to make people want to come to Paris and Îlede- France again. They are also unifying events for destination professionals, working to redefine target customers with a view to returning air traffic to normal in the medium and long term, but certainly not before 2025.

London has capitalised heavily on the arrival of the Olympic and Paralympic Games in 2012, which have completely transformed certain areas of the British capital and seen the emergence of new business zones. This new face continues to benefit the destination, which - outside of the crisis period - has average prices and RevPARs that have risen steadily since the arrival of the JOPs in the destination.

The coordination of the hotel players will be decisive in order to capitalise on the arrival of foreign tourists, the prices charged will be particularly crucial so as not to push the clientele towards accommodation of the Airbnb type. Indeed, although the European Rugby Cup had benefited the hotels in the Regions, it had not brought any additional customers to the Paris Region hotels, which had very early on charged prices that were considered prohibitive by potential customers.

The quality of the welcome enjoyed by national and international tourists who will experience these two international competitions will be of prime importance for their desire to return to Paris Region on the one hand, and the brand image of the destination on the other.

A DESTINATION HARD HIT BY THE CRISIS, WHICH MUST REACT COLLECTIVELY

Born at the beginning of 2017, the Staycation concept needed a hotel market as rich and varied as the Île-de-France market. 3 years later, it is a concept that allows properties to welcome at weekends a clientele from the Île-de-France region looking for a weekend getaway to catch their breath, alone, with friends, in couples or with family.

At the beginning of 2019, the startup, launched by three former BETC employees, was self-financing with 280,000 registered customers in the Paris region. Since the crisis linked to the COVID-19, the concept has made some offspring around Lyon and on the French Riviera. One of its co-founders, Mathieu Dugast, declared at the end of October at Libération a business volume multiplied by four since June. Upscale, luxury hotels and boutique concepts have rushed into the breach opened by the three entrepreneurs to fill their properties and keep them running at a minimum, while the destination has the most mediocre ORs in France during this period of second lockdown.

Île-de-France is attractive for many concepts that think outside the box. After the staycation, another way of doing tourism has become very popular in recent years, slow tourism. "In the heart of the Haute Vallée de Chevreuse Regional Nature Park, the Barn is a plural place, a place to live. Nestled on the Terres de la Cense, it is a restaurant, a vegetable garden, a spa, a hotel, all born from the vision of two lovers of wide open spaces and horse riding." This is how this outstanding property presents itself, offering not only accommodation but also activities, co-working, a wellness area, an on-site vegetable garden where the vegetables end up on the guest's plate... in short, a destination in itself created around a stud farm.

Of the 43 destinations developed by Huttopia in France, 2 are located in the Paris region, in Rambouillet and Versailles. The concept, launched in 1999, is based on a preserved natural environment, which the two founders consider to be exceptional, to create sustainable destinations in line with the areas in which they are located. A concept that has found its audience and is looking for new development opportunities in the region. Two examples among many others of the development of the slow tourism offer in Île-de-France. The challenge for the destination will be to keep captive this Paris Region and local French clientele, newly conquered by force of circumstance, in order to capture a more diversified customer mix. An additional resilience factor for destinations that are certainly very popular but dependent on business and international customers for their frequentation, and the maintenance of average prices that are among the highest of European metropolises.

Repeaters, families and young people are among the targets which will henceforth be favoured by the Region in order to decongest the pockets of over-tourism, to distribute the flows and to better enable the territories to benefit from tourism and its economic spin-offs. Behind this will, lies the need to build a tourism development strategy more adapted to the unstable situations which have regularly hit the destination for several years (terrorist attacks, sustained strikes, yellow jackets, etc.) apart from the global crisis linked to the pandemic.

The complexity of the equation will lie in the fact that the first visitors who come to discover the destination's must-see attractions will have to be reassured, reattracted and welcomed under the best possible conditions, alongside an offer that is just as important but at first sight less remunerative for local customers. Local professionals are, by necessity, more open to trying out new experiences, repositioning their product offers to broaden their clientele and protecting themselves as best they can against new economic events, such as the latest one, which ended a record upward cycle for Paris Region.

How to make tourism accessible to all?

More international tourists than ever in 2022