Once upon a time there were Kodak and Fuji film... everyone is familiar with their histories. Their trade has not disappeared - photography lives on. 250 billion selfies are taken each year. What happened to these major industrialists who led the way for photography worldwide? They went two different ways.

One has disappeared, the other has switched to medical imagery, turned to muses for the brand and capitalized on Polaroid.

The same is true for La Poste, France's postal system. The use of written communication has not disappeared, but it is now done differently. We no longer communicate by paper, but via emails or mobile applications to circulate information much faster than via airmail.
There was also a time when the Yellow Pages directory was absolutely essential, this information is still necessary but now it is also available elsewhere. Especially on Google.

Last year, at the Global Lodging Forum, a speaker said that when he was working in retail, market leaders looked at Amazon with a mocking eye, and so did booksellers. Until the day when... The same applies to hoteliers with Expedia, Booking and others...

But change is possible. In 2002, La Poste had 17 billion euros in turnover. In 2018 that figure was 24 billion euros. The business model is changing. Fewer letters (63% of turnover in 2002 compared to 37% in 2018), more products, particularly items ordered online by Internet users, and banking services.

The hotel industry in Europe in 2018

In Europe, in 2018 the RevPAR increased by 4.5 %. The Iberian peninsula progressed significantly in 2017, so it stagnated a bit in 2018, inversely France significantly made up for poor results in 2017. 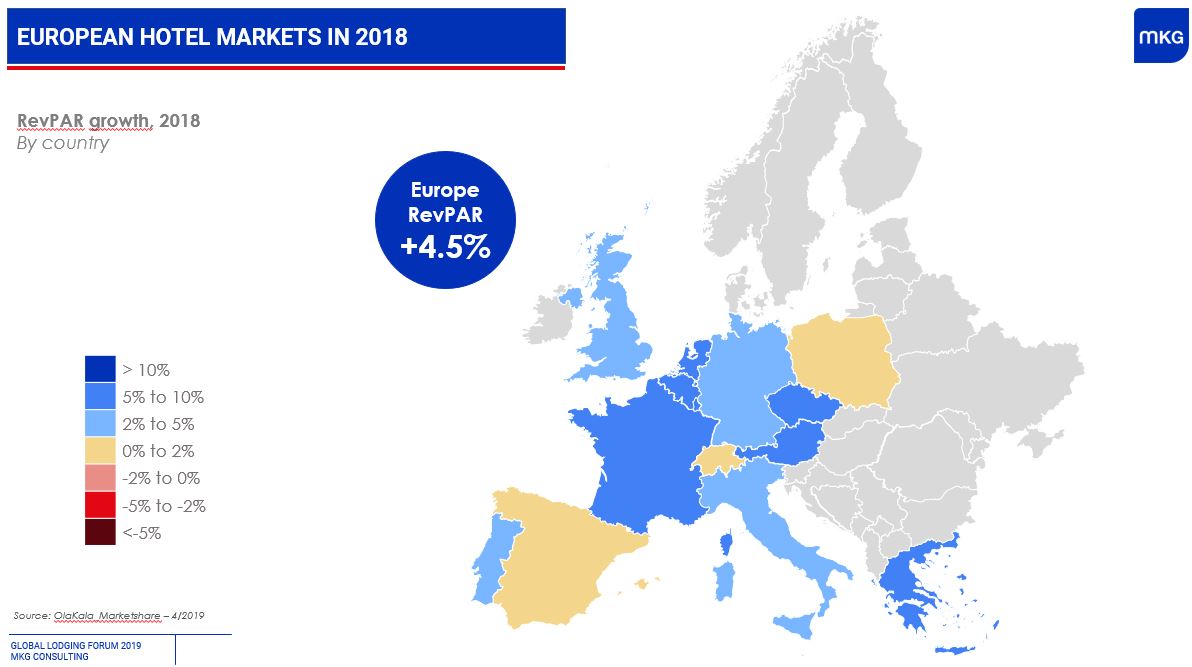 In January and February 2019, RevPAR progressed by +2.6%. It is impossible to identify a clear trend for 2019 based on just two months of results, particularly further to events in France. One thing is clear nonetheless: there is a slowdown in the UK. (See the analysis of the first four months of 2019 MKG Consulting trends).

The investor becomes extremely important: that is who will bear the risk and the asset. It is interesting to look at cycles because the investor is in it for the long term, not just for the RevPAR for the year. In the last 19 years, two periods may be identified. 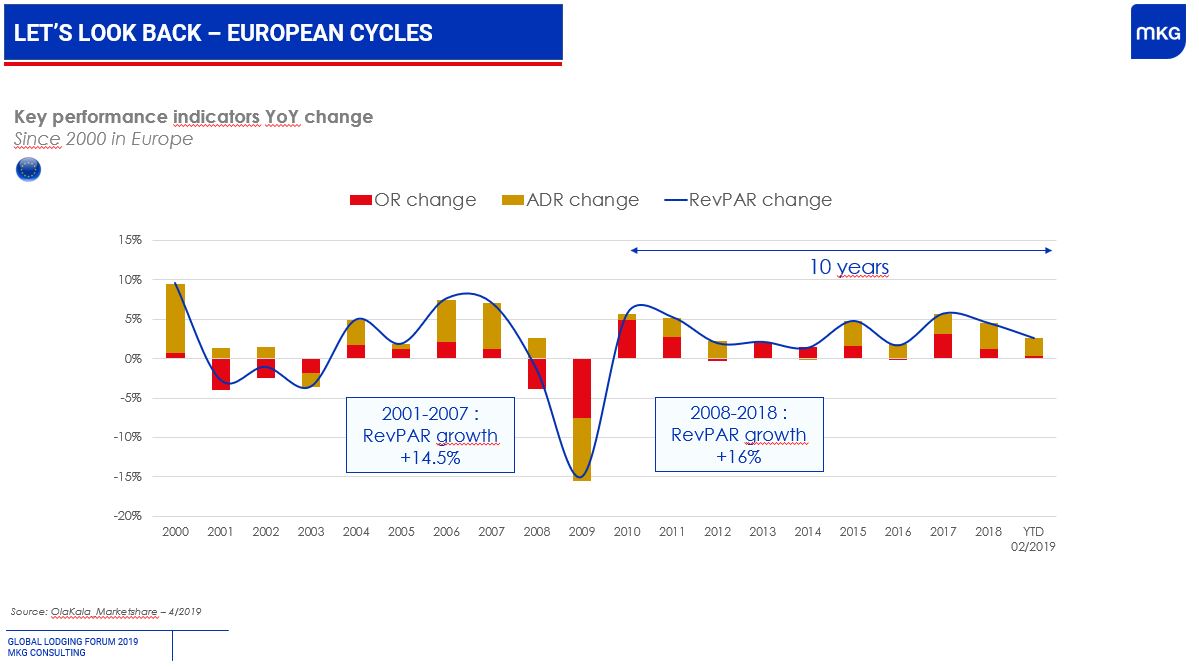 The cycles are growing longer.

There are major disparities between different European countries 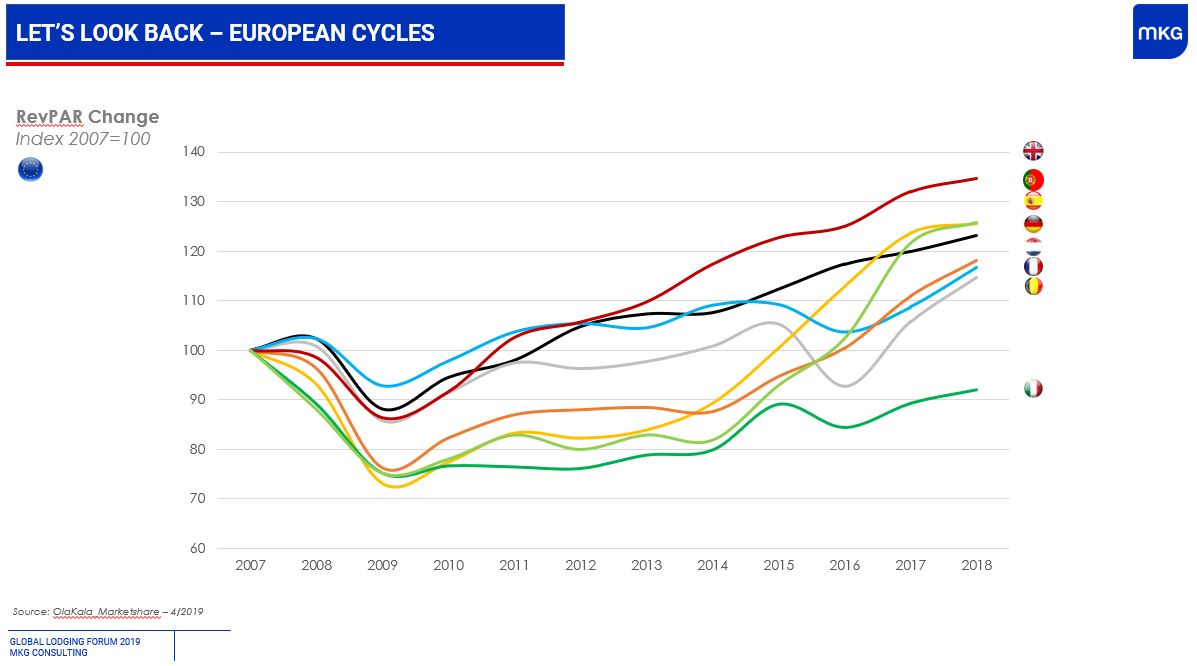 The booster effect of the 2012 Olympics is perfectly clear for the UK. We hope to see similar growth in France thanks to the Olympics in 2024 (see the London-Paris comparison: projects, urbanism, mobility). The sovereign debt crisis is clear for Italy, Spain and Portugal. The impact of the terrorist attacks in 2015 and 2016 is also visible for Belgium and France. There is visible recovery in Spain and Portugal.
What would the cycles have looked like without these major events? From +16% over 10 years, it might have been +20.3% between 2008 and 2018 excluding exceptional local events.

If we look at the spectrum of tourists and erase administrative borders, what are the performances per agglomeration? The face of these 200 destinations. 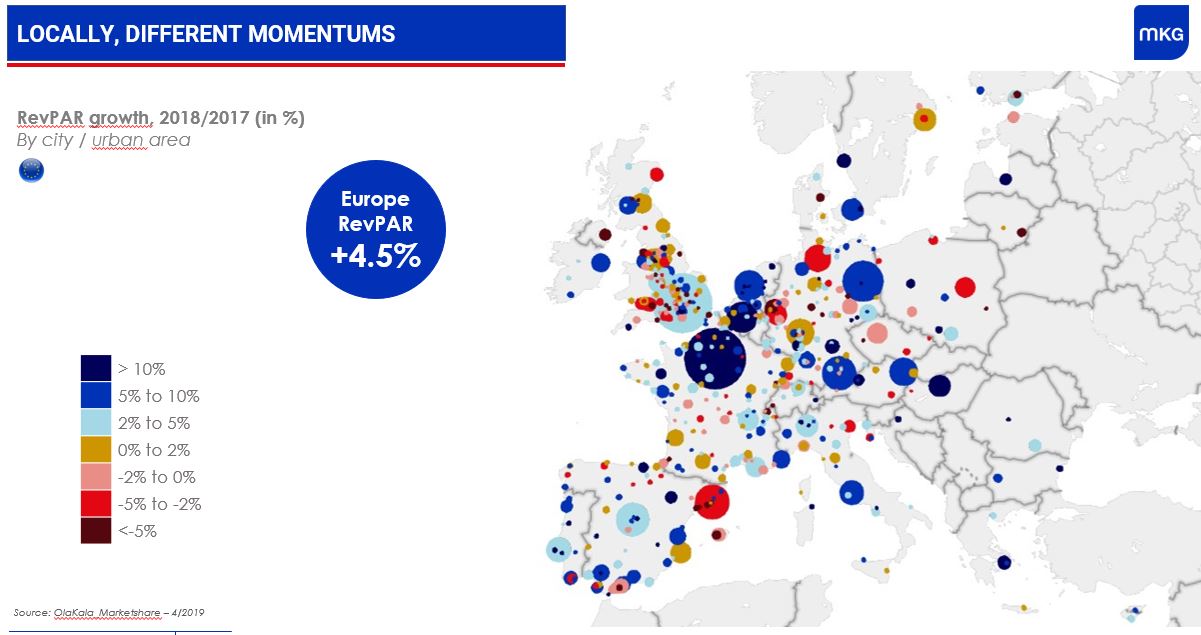 The political climate in Barcelona is driving the destination downwards. London and the UK show a slowdown also.

What interests the investor in the first place is the absolute value more than the fluctuation because the cycles we are on are longer. The average daily rate for major destinations exceeds 100€, the occupancy rate is higher than 75% (72.7% for all of Europe). As a result of these performances, chain hotels are developing their products in these markets. Regardless of their variations, they guarantee average daily rates and occupancy rates that reassure and facilitate investment decisions.

France, a mature market in Europe

If we take a long cycle (1983 – 2018) in France, a mature European market, and put the variations of average daily rates into perspective with respect to the hotel supply, we may observe that between 1984 and 1995 the average daily rate dropped -1.7% on average. On this period, the hotel supply progressed by +2.8% on average. It should be remembered that the '80s were a period of inflation and 1993 a year of real estate crisis. This period corresponds to an acceleration in supply growth at standardized hotels, especially for the economy segment.

The third phase, 2009-2018, saw an uptrend. Two scenarios emerge. Either the supply grows at a similar rate to the previous cycle, or the supply is restructured and the growth rate is steadier with 2.5% annual growth. These data clearly reveal the correlation between occupancy rate and average daily rate. When ORs rise, so do ADRs, and this influences the development of supply in mature markets.

How does the curve of the OR in Europe compare to that of the OR in France (2000-2018)? Between 2000 and 2001, France outperformed the European market in absolute value. A gap between European and French results followed.

Are we entering an era in which the product will restructure the hotel market?
In the 1980s-90s the chain supply grew in France, while from 1996 to 2000 independent properties closed. Moreover, new products entered the market from 2010. Will these restructure the market or accompany its restructuring? In 2018, the opening of new generation brands is more dynamic than "traditional brands". Boutique type hotels also make it possible to develop the independent supply. 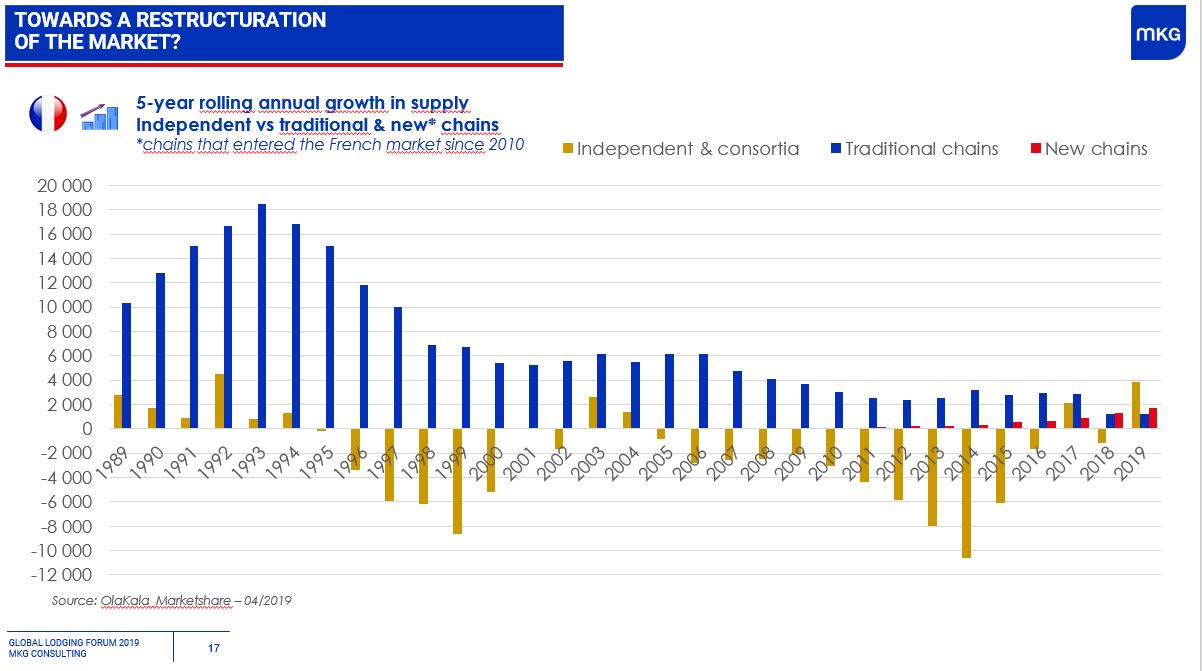 We must bring high added value to products in the form of service-oriented software. Focusing on the performance of chains from January 2017 to February 2019 in Paris, there is a strong divergence between the RevPAR of new brands and that of "traditional" brands. 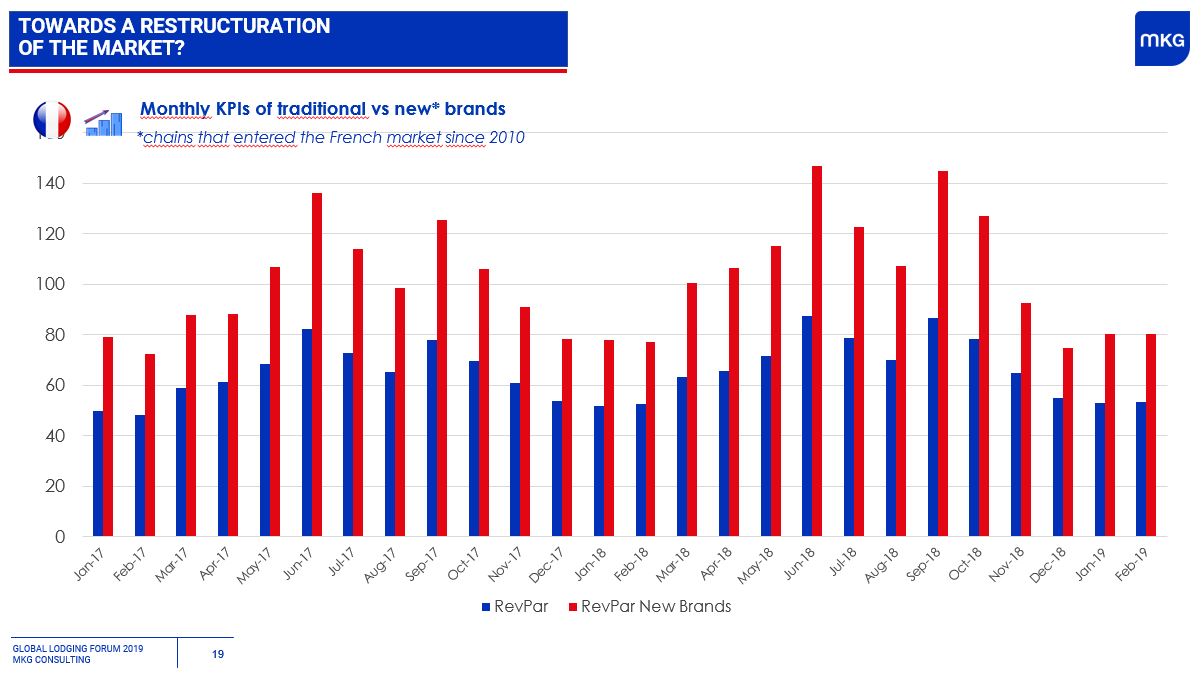 New products outperform old ones. On the same scale for occupancy rates, new products outperform the old by 3 points on average.
Of course, investors choose markets that guarantee a good OR and good ADR. Acquisition costs are higher, therefore it is important to have a product with good profitability. Looking at the evolution of the supplies of IHG, Marriott and Hilton since January 1, 2010, what stands out is the fact that it is a densification of the UK, German and Iberian peninsula's markets.

The CAPEX war: Why? How?

A CAPEX war will most likely take place because on the one hand investors who will bring new asset classes, new products for a better return and to be more attractive. On the other hand, there is already a mature market that experienced several product renovation cycles and may have to reuse CAPEX to be aligned once again with societal expectations. What will probably make all the difference is the allocation strategy for these CAPEX. How can the best possible return be guaranteed when decisions are made at the CAPEX level?

What can we learn from an analysis of 20,000 rooms in France where there has been CAPEX? Does it create value (see the renovation of ibis brands, see the renovation of IHG brands)? Under what conditions did the investment create added value? First observation, CAPEX do not automatically create value. A few key elements influence that: change in intensity of the competitive environment the fact that the asset's performances are historically good. 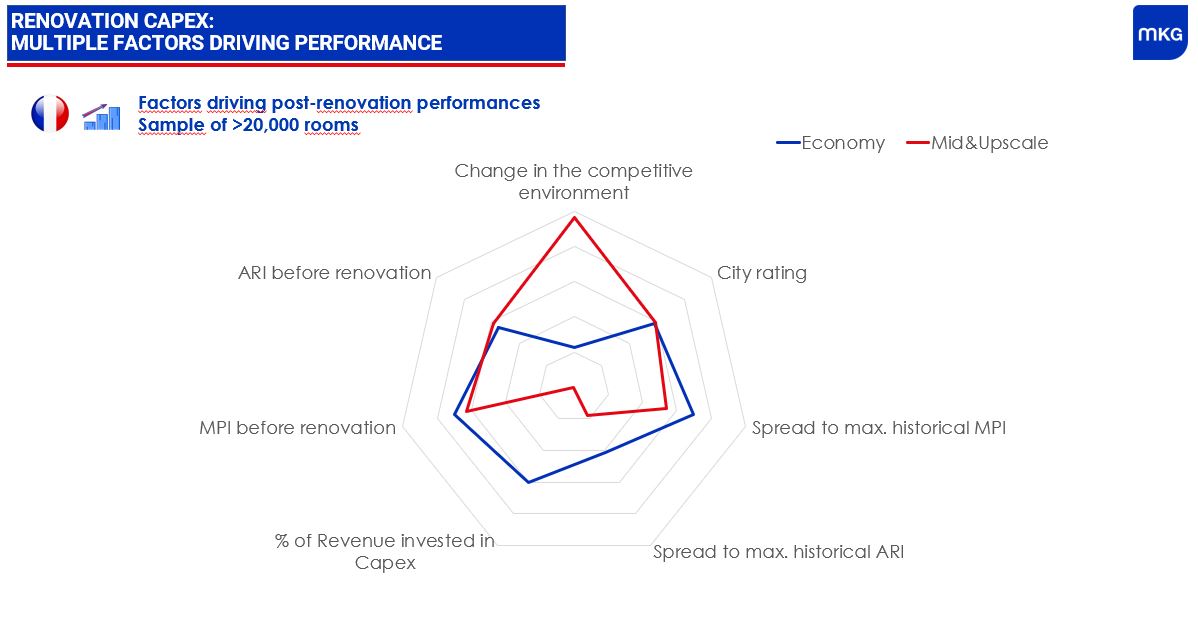 What are the differences between a "prime" destination and a more secondary one? 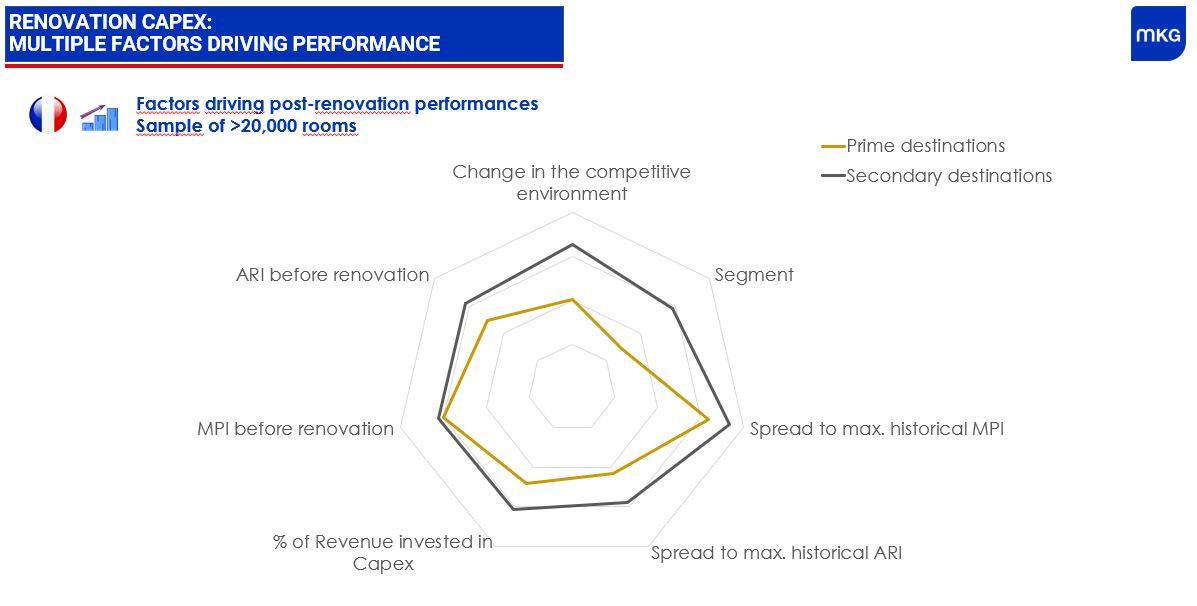 The type of CAPEX scenario must be chosen carefully. Will it be offensive or defensive? Will we limit ourselves to promoting energy savings because the market does not allow us to make more profit? Just as it was necessary to conduct market studies to establish a new presence, it is important not to make mistakes when redoing a CAPEX cycle. By repeating the strategy of the last 30 years, the only result likely is to "burn cash", or throw your investments out the window.

SoftBank partnered with OYO, the Singapore investment fund; GIC partnered with citizenM. OYO is reaching a valorisation of 10,000 € per room (5 billion in all); for citizenM 500,000 € per room (2 billion in all). Of these two examples, one is an asset light model: OYO franchise & lease. GIC, instead, is an integrated model. Value is created on an integrated model as the sector's pioneers did in the 1950s and 1960s. GIC is also present at AccorInvest and HOST. It also has an operator: citizenM.

Operators will become asset operators that must produce a return on the assets on behalf of the account, in particular the owners, be it GIC or Capitaland. These investors, who are originally real estate investors, are increasingly becoming owners of operators.

Staycity to settle in Portugal