Food & Beverage, a hospitality sector that is booming, continues to innovate and renew the codes and attract new clients, or, more precisely, new gourmets. A taste of the latest concoctions from hotel schools.

Sometimes it can be difficult to imagine how to reinvent yourself on your own. That is why it can be useful to ask for a perspective from an outsider, or even better, a new one. In February 2018, Amir Nahai, Accor's CEO Food and Beverage, challenged students at the Ecole hôtelière de Lausanne (EHL) as part of Dr. Marc Stierand's class "Creating the Food Service of the Future". The idea was to create new F&B experiences for two new properties of the group: a SO! Hotel in Paris (100 rooms) and a Raffles hotel in London (125 rooms).

The Paris property, is slated to open in 2021 at 144-150 Avenue des Champs Elysées. In the meantime, two teams of Dr Marc Stierand's students have already created a restaurant offer that is original in terms of both its graphic style, the type of food offered and the concept of hosting.

This first group created a food lab, a bubble waffles restaurant and a ‘No’ bar concept – a space where drinks are available although it’s not a truly a bar. The second group was given the spaces' multi-sensory aspect based on  contrasts, for example, a black and white visual theme, or several sensory experiences in which the guests and all their senses become part of the contrast and experience.

In London, meanwhile, the future Raffles brand hotel will open in Churchill's former war office in 2020. For this project, the students were divided into three teams. The first one created a culinary experience based on the Thames River and its relationship to the city of London. The second developed a concept around the plurality of cultures throughout the United Kingdom. The latter, which won the challenge-competition, was inspired by the concept of timelessness. It was based as much on classic and popular icons that have survived through the ages as on the very idea of being oblivious to time upon entering the hotel.

Impressed by all the solutions imagined by the students, Amir Nahai declared:

I was very interested in watching their thought processes to see how the students think critically to develop concepts and solve real business challenges. The multicultural makeup of the teams also led to richer and more dynamic solution.

We'll have to wait until the two properties open to see the final result of these original F&B concepts.

A pop-up restaurant imagined and run by students

Ecole Supérieure Hôtelière (ESH Lille) also challenged its students for a school project, but this time in the form of a professional situation. A group of 17 students in the BTS program were asked to develop and manage a bistronomic restaurant for two months in Tourcoing, in the North of France.

Located in the city center, the address known ass "Le Saisonnier" located 17 place Charles Roussel opened from last May 6 to June 28, offering service at noon on weekdays, representing a daily volume of 50 covers. Two menus were available: a starter/main course/dessert for €16.50 VAT incl. or starter/main course or main course/dessert for €12.50 VAT incl.. Decoration; meanwhile, such as the logo, were also designed by the young people around a countryside theme, subtly echoing the name of the temporary summer restaurant.

As far as the culinary aspect itself is concerned, the concept has combined gastronomic recipes and locally sourced products, with Appellation d'Origine Contrôlée (AOC) or from organic production.

The menu, which was unique and refreshed every two weeks, included, for example, cod with a fondue of carrots with black garlic, served with beets and pink radishes; duck breast with AOC honey and ginger; chicken with escabèche.

With a palette of different flavors at very reasonable prises with respect to the quality, the property's success came rapidly. The school will therefore renew this experience next year with the next class.

A culinary competition to stimulate students at all levels of the B.H.M.S.

The Culinary Cup Competition began just a few years ago at the Business & Hotel Management School (BHMS) based in Lucerne, Switzerland. The goal was to stimulate students to "push their ability to experiment at all levels, especially in the pairing of food in a creative way".

Participants are third year BA Culinary students. This program prepares students for responsible positions in the world of restauration by giving them the practical skills in management and business. They are also trained in the creation of new products, molecular cuisine as well as technological applications.

All this knowledge is put to the test during the competition, especially their ability to understand food, coordinate, manage stress and work as a team. As the school's website reminds us, "participation in live competitions prepares students to face the pressure associated with such events".

The winner of the 2019 edition, Sai Batta, was presented with a gift bag containing a Japanese style Santoku knife, a certificate attesting to the success of the event, as well as a cup engraved with the winner's name and displayed in the reception area on the campus. Saia Batta will also have the opportunity to represent the school and Switzerland as a whole at the international competition to be held in India next year, the Young Culinary Olympiad 2020, where sponsors from all over the world will be present, including hoteliers such as Hyatt, Swissôtel, Taj, Le Méridien, and Novotel. 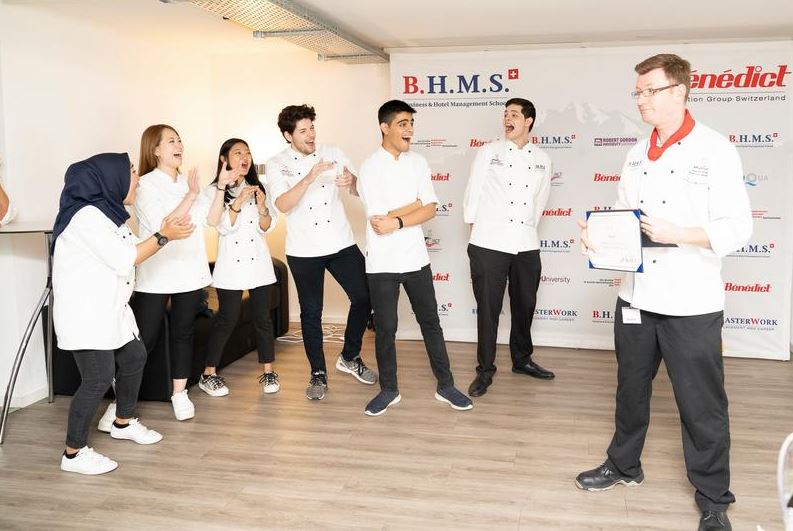 Apicius, Swiss culinary laboratory inaugurated in April 2019 on the campus of the César Ritz Colleges

The school's campus, which belongs to the Swiss Education Group and is located in Le Bouveret, completes the facilities of its Culinary Arts Academy Switzerland with a new culinary experimentation centre. This culinary "laboratory" was inaugurated in April 2019 in the presence of two Swiss celebrities, Irma Dütsch, who is the first Swiss woman to be awarded a Michelin star, and Anton Mosimann, who is both a starred chef and an Officer of the Order of the British Empire.

Apicius, named after the famous gastronome in ancient Rome credited with compiling the oldest collection of recipes author of the recipe collection, is dedicated to innovation. Organized into seven distinct kitchens, it creates a learning path, in which each stage of the culinary art is studied and revisited, from the preparation of the dish to plating. For example, third year students developed vegan recipes this year. A total of 14 students were able to take part in this fun adventure. Teaching equipment is interactive starting with a high quality audio-visual system.

At the top of Apicius, the fourth floor offers a gastronomic address with panoramic views of Lake Geneva. Food Inspired by Franck Giovannini is both a restaurant and a space for learning for last year students. Here they may practice their know-how and excellence that they learned and assimilated up until this point in their studies.

The creation of this state-of-the-art building for culinary exploration, which involved a total investment of 9 million Swiss francs, follows a significant increase in the school's enrollment in its culinary arts programs. The latter have reached maximum capacity with 850 students culinaire.

We are delighted that this new centre will enable us to continue to offer education of the highest quality and thus to respond to very strong international demand for turnkey training services specialising in the culinary arts.

In addition to responding to the school's growth, Apicius is also a solution created in collaboration with leading Swiss chefs  so that students can "draw inspiration from leading names in Swiss gastronomy, such as Irma Dütsch, Anton Mosimann and Franck Giovannini", as a press release explains.

Finally, the building improves the how students are hosted. These new high-quality facilities provide students with an ideal setting in which to study and learn the trade" commented Anton Mosimann, one of the chefs who sponsored the project.

The Culinary Arts Academy Switzerland was founded in 2006 as part of César Ritz Colleges. It is present on the school's two campuses in Lucerne and Bouveret; exchange opportunities allow it to offer excellent professional opportunities in different fields of catering.

The Bachelor in Culinary Arts and the Bachelor in French Pastry Arts, both created in 2016 and signed Yves Thuriès and Alain Ducasse, awarded diplomas to their first graduating class last July. A look at these two new training programs that are expected to change the world of culinary arts and French pastry.

Last July, in Yssingeaux (Haute-Loire), a celebration marked the end of three years of post-baccalaureate studies in the culinary and pastry arts, which began in 2016. The students in the class of 2019 received their diplomas from one of the two programs, and most are now entering the professional world. "Some of them will join the ranks of prestigious establishments such as Angelina, Le Louis XV and Harrods," the press release confirms.

With technical and management training, these two courses of study offer a multitude of skills for an accomplished training reflecting French know-how in this field. DUCASSE Education has created two schools to meet this need for excellence in the fields of cuisine and pastry: the Centre de Formation Alain Ducasse and the Ecole Nationale Supérieure de Pâtisserie (ENSP).

Its originality is that it provides training at a level of higher education in the form of a bachelor at each. This makes it possible to offer a more advanced level of expertise that heretofore was only available through 8 or 9 month professional programs and at the level of the CAP (certificate of professional aptitude).

Josiane Mathias, director of ENSP, explains at the inauguration of the two programs in 2016:

The strategy of Ducasse Education is to develop the Bachelor, a three-year post-Bac program. We train people with good technical skills whose minds are full of ideas to become entrepreneurial pastry chefs.

DUCASSE Education is the result of an alliance between two great names in French gastronomy: Alain Ducasse and Yves Thuriès. The first is Head of DUCASSE Education and the second, who has also received the title of Best Worker in France, is President of ENSP. Both were present at the graduation ceremony for the two bachelor programs. 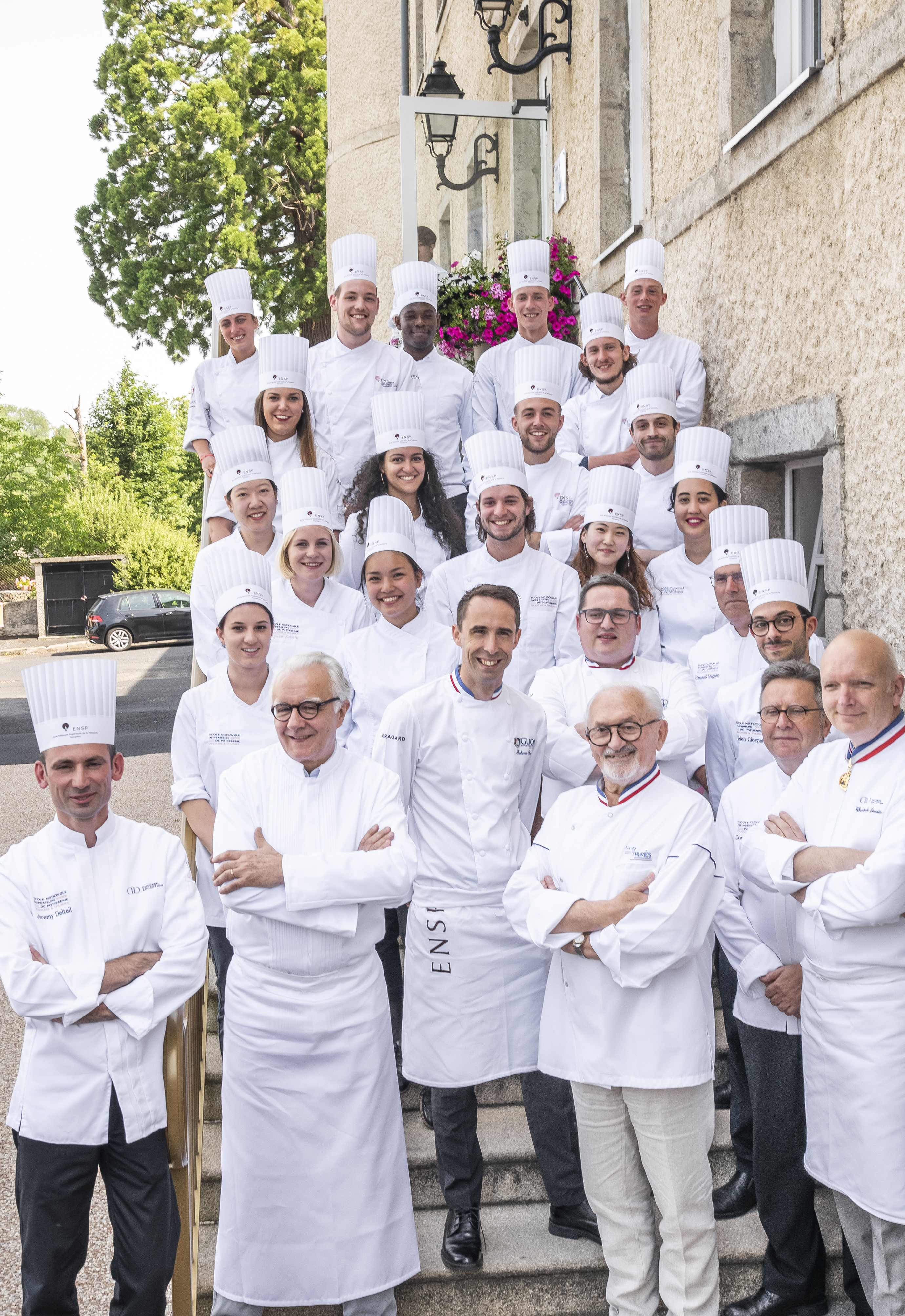 [Update] The sustainable transition of hospitality