The outdoor hospitality industry has undergone profound changes over the past ten years. Holidaymakers are hailing from different source countries. A new clientele has emerged, with new uses, resulting in the development of new products that are better equipped and more sophisticated. A look at these major changes in the sector's demand.

The outdoor hospitality business was born out of a demand that emerged towards the end of the 19th century. Jacques Bousquet recounts the beginnings of this original form of accommodation in "Le camping évasion vers la nature" (1945). He explains that it was introduced by our British neighbors in their quest for contact with nature who founded the Association of Cycle Campers in 1875, which is regarded as the first outdoor hospitality association:

English cyclists are becoming more like "Robin Hood" highwaymen. The hostel is no longer enough for them because these people, who are thirsty for fresh air, cannot stay in hotel rooms when they leave their homes. Generally, they want to camp, in the middle of nature, and not wall themselves in where they tend to feel asphyxiated. An association of cycle campers, or in other words cyclists in love with camping, has existed in London for some time now. This association already has more than 250 members.

France's outdoor hospitality industry realized 125 million nights in 2018. The clientele are essentially domestic (68%), although one third of nights (32%) are foreign.

Dutch and Italian customers have decreased over the past eight years. Between 2010 and 2018, overnight stays by Dutch nationals fell by -1.9% and those of Italians by -2.6%. The Netherlands, the leading source of customers for our outdoor facilities, is currently experiencing economic difficulties, with the announcement of Brexit on the one hand and a slowdown in trade with Germany on the other. As a result, holidaymakers from this country have steadily reduced their spending in France over the past four years, from €2.8 million in 2013 to €1.88 million in 2017 (source: Statista 2019), which may explain the decrease in the number of overnight stays in 2018. As for Italy, the economic situation there has deteriorated even further, caused by a complex and sensitive political situation, as well as an increasing public debt, estimated at 132.6% of GDP in 2019.

Seasonality of the market

The outdoor hotel industry is a seasonal sector par excellence. Seasonality induces a high intra-annual variability in sales. Thus, the peak season corresponds to the extended summer season, i.e. from April to September, for a total of six months during the year. It is therefore important to take this data into account in the study of annual performance, since it is biased by the fact that half of the year is a slow period, when campsites are deserted, in almost dormant state, while during the other half they are active.

And yet, in 2018 the annual occupancy at of the supply was 35.6% (up by +0.1%). Applied to the six months of annual activity, this means that the campgrounds have a very good occupancy rate, which can go up to 60% for France overall throughout during certain months in the high season.

Occupancy at campgrounds is very cyclical and varies considerably within the period of activity, with an early season at about 10% occupancy in April, a high period in August at 60% and an end of September around 20%.

Evolving expectations: a strong attraction to high-end properties and an increase in the number of stays at fully equipped sites

The outdoor hospitality industry is down in the entry-range segments (1-2 stars) and unclassified properties. Growth in the last ten years comes primarily from mid to upscale campgrounds.

In other words, whether in France or elsewhere in the world, it is quite evident that the growth in the outdoor hospitality sector is driven by the upscale category, or more broadly, by equipped facilities, i.e. those with good reception facilities for customers. This is proof that customer expectations have indeed evolved towards a sophistication of their needs, requiring more comfort for their stay, like the spread of Wi-Fi rather than a very basic rudimentary offer.

The argument of the connection to nature is less and less perceived as sufficient to attract the customer, who is being supplanted by the financial argument. Customers are increasingly attracted by competitive rates that are lower than those found at conventional hotels, while still approaching the quality of the latter.

As explained in the first part, innovation plays a key role in the differentiation strategy to attract or retain customers. This is why the Sandaya group, created in 2010 by two French companies and now present in France, Spain, Belgium and Italy, works in collaboration with the playground outfitter Upper Play. The latter recently announced the launch of a new product, the Acro'Cube®, a fully modular wooden and metal play area. This will expand the range of equipment available at campsites.

Consequently two customer profiles stand out clearly and and rub shoulders in the outdoor hospitality sector. On the one hand there is "historic" clientele, who are fans of outdoor holidays and often inamored with nature. Then there are new clientele, who are interested in this type of accommodation because of its affordable rates that it offers families who are seeking holidays at accessible prices.

Within this increasingly demanding clientele, in a quest for an ever more sophisticated product, is this trend called "Glamping". The product of the contraction of "glamour" and "camping", it refers to this model that combines camping in the open air with accommodations that offer a high level of comfort. The accommodations can take the form of yurts, tepees, lodges, cottages, etc.

One good example is the Shinta Mani Wild, of the Bensley Collection, which opened at the end of June 2019. This complex is located in the middle of the Cardamom National Park in southern Cambodia. It has 14 luxurious one-bedroom tents and a two-bedroom tent. These houses are made of solid wood, and the windows are made of lightweight canvas that can be rolled up. A hybrid between a campground and a hotel, the property is known for its use of chemical-free products made from medicinal plants, herbs and spices from the surrounding rainforest. It is also equipped with a 35-meter swimming pool, including a bucket shower installed on the river bank.

In addition to these very specialized collections, the major luxury brands are also launching into this very specialized segment. Four Seasons opened the Four Seasons Tented Camp Golden Triangle in Thailand, on the border of Burma and Laos. In the spirit of a "19th century explorer", the property features 15 luxury tents and lodges, with a rigid wooden structure and a waterproof canvas roof. The decoration of each unit has been carefully elaborated, using local artifacts and colonial-style furniture, such as copper and claw-footed baths. 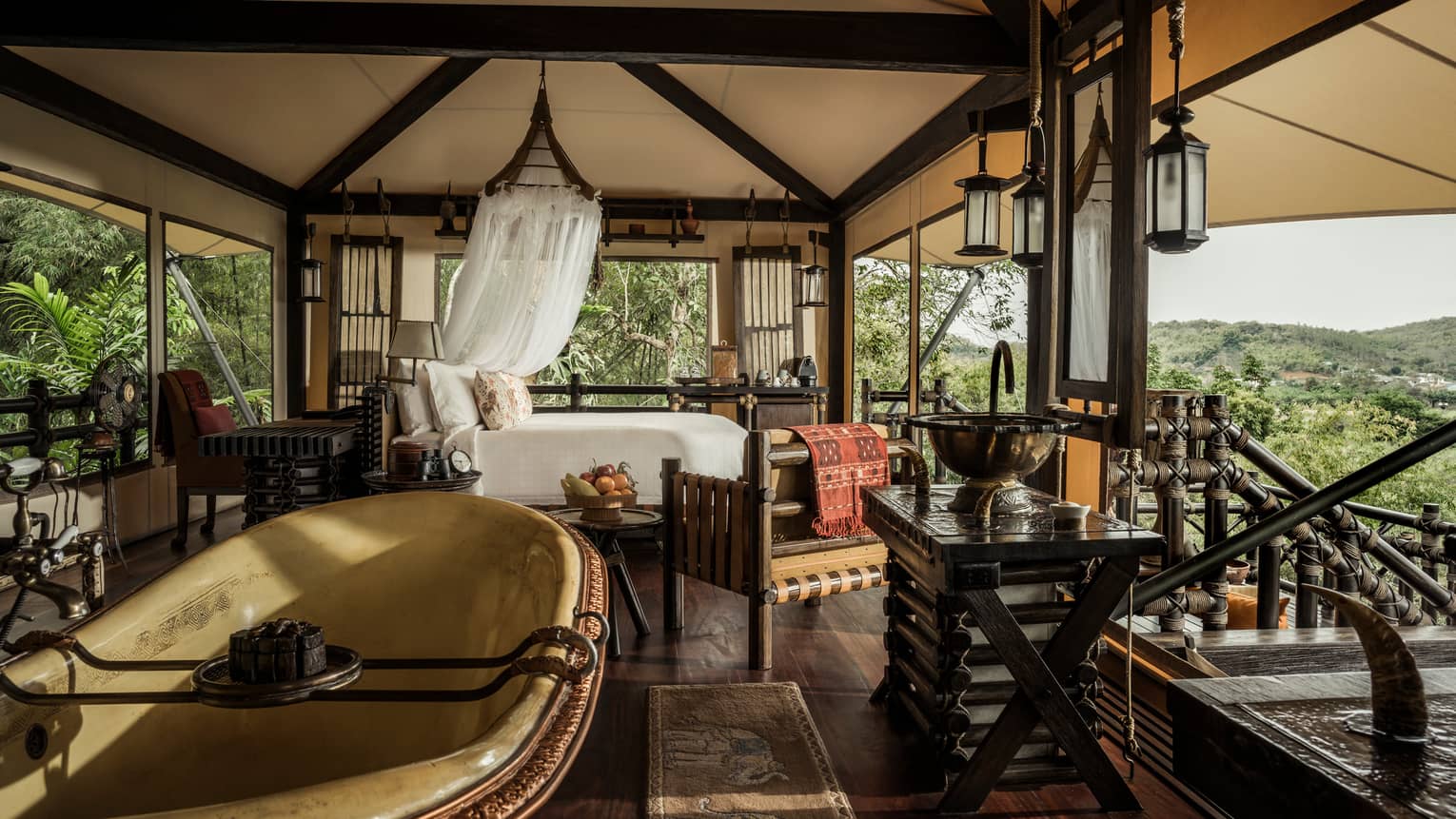 Finally, in a much more urban context, is the third CityKamp by the Huttopia chain in Paris, the Indigo Campground. A four-star classified property located in the Bois de Boulogne, it combines greenery and asphalt in a single experience and has a capacity of 410 pitches. In an unconventional context, this facility allows holidaymakers to visit the capital at a more affordable price than traditional hotels, ranging from €19.00 including tax (per night) for a small empty pitch to €163.00 including tax (per night) for a mobile home cottage+. The offer of equipped accommodations includes cottages, caravans and "Toile&Bois" tents.