This year, COP 25 will be held in Chile and will focus on oceans. 75% of the planet is covered by oceans and 10% of the remaining landmass is covered by glaciers and ice caps. In Monaco, in September 2019, a special report was presented that emphasized the need to act urgently to prioritize opportune, ambitious and coordinated initiatives to bring about lasting changes in oceans and the cryosphere. So how do hospitality and the travel industry figure into this?

The impact of Travel

The travel industry has grown intensively over the years with international tourist arrivals in 2018 totaling 1.4 billion (+6%), a figure that it was expected to reach two years later, according to the WTO January 2019 press release.  Stable fuel pricing means affordable air travel, and as connectivity improves in many destinations, source markets are increasingly diverse. The consequence of this is significant levels of pollution with high CO2 emissions. 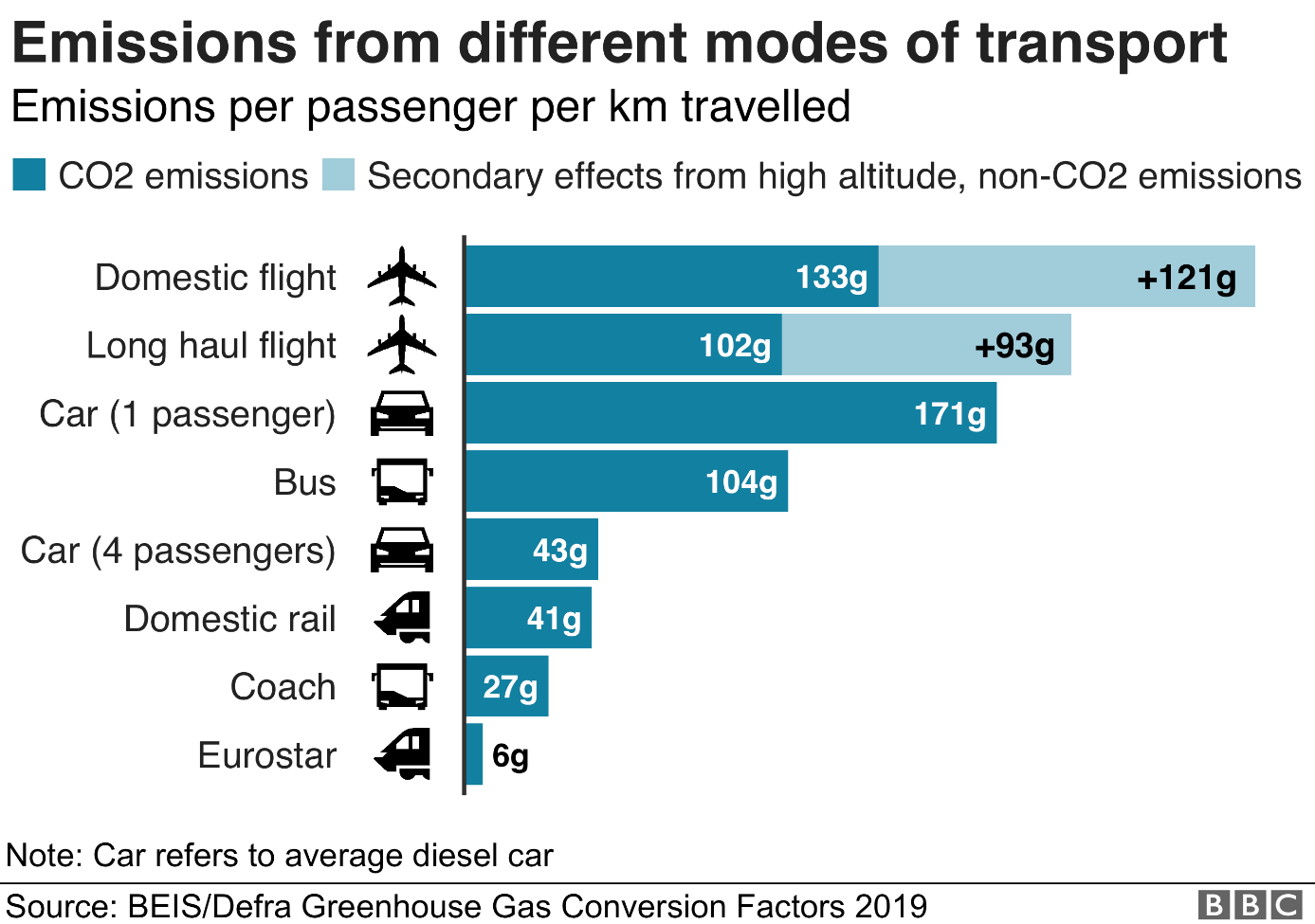 While train travel would be the ideal mode of transportation, it is not necessarily viable over long distances due to time and logistics such as visas for every country traveled through and the need to change trains rather frequently. A new UN report suggests that while airplanes are increasingly fuel efficient, even if aviation meets its climate change targets, by 2050 aviation will have consumed 12% of the global carbon budget for 1.5C. And if it does not meet these targets? That consumption could be as much as 27%. One way to combat this is the use of biofuel.

Another culprit in global warming is the cruise industry which catered to over 26 million customers in 2018. Choosing cruise travel caused each passenger’s carbon footprint to triple. Moreover, these ships produce 15 gallons of hazardous chemical waste daily and use the dirtiest fuel. Cruise ships produce fumes and dump their trash, fuel and sewage in the ocean. Efforts are being made to power ships with electricity when they come to shore and to switch to cleaner fuels

While they are not yet widespread, sustainable cruises do exist and their numbers are growing, and Nordic countries are leading the way in this area.

Cruise line Hurtigruten uses hybrid ships, which are powered by a battery system. By 2021, Hurtigruten plans to operate at least 6 of its ships on a combination of biogas, LNG and large battery packs. These hybrid engines will be powered in part by liquified biogas (LBG) – fossil-free, renewable gas produced from dead fish and other organic waste which is produced steadily by Nordic fisheries and other industries.

Norwegian ferry line Color Line now has a battery powered plug-in hybrid ferry that will operate on battery power in and out of port. It also uses exhaust gas cleaning systems, or scrubbers, on the main engines. These scrubbers reduce sulphur dioxide emissions by more than 90 percent and ensure an annual sulphur dioxide emission reduction of more than 500 tons per ship as well as reduced emissions of particles such as soot by around 50 per cent.

Finnish cruise company Viking Line is exploring wind power, and it has partnered with energy company Norsepower to install a rotor sail system on an LNG-powered ship, helping to cut emissions by reducing power consumption between 207-315 kW, the equivalent of 231-315 tons of fuel per year.

Finally, the Japan-based NGO called Peace Boat has developed a zero-waste ‘Ecoship’ that would use a hybrid engine, combined with wind and solar power.

Plastic is one of the most pervasive wastes that is virtually permanent and causes damage to marine life as well as being a permanent nuisance due to its lack of biodegradability. Birds, turtles, fish, whales, and more have been found entangled in nets and packaging struggling at sea and with their stomachs full of plastic washed ashore. Veritable islands of plastic have been found in what should be pristine waters such as the Great Pacific Garbage Patch that is estimated at more than 80,000 tons of plastic waste. When the plastic breaks down into smaller and micro particles it may be ingested by animals and the toxicity of the plastic is detrimental to their lives, and subsequently human life.

The European Council has adopted a ban on single-use plastics that builds upon the EU's existing waste legislation. It sets stricter rules for those types of products and packaging which are among the top ten most frequently found items polluting European beaches. One of the main purposes of this directive is to reduce the amount of plastic waste which we create. Thus, single-use plastic plates, cutlery, straws, balloon sticks and cotton buds will be banned by 2021.

Airlines, hotels and cruise ships alike are working to eliminate plastic from their operations and even make efforts to clean up the environment.

American Airlines has eliminated straws from its lounges and serves drinks with a biodegradable, eco-friendly straw and wood stir stick and eco-friendly flatware will also be seen in the lounges. The airline is making a similar move for its in-flight services with a transition from plastic straws and stir sticks to stir sticks made of sustainable and environmentally friendly bamboo. With these changes, American will eliminate more than 71,000 pounds of plastic per year.

Ryanair has committed to eliminating all non-recyclable plastics from operations over the next five years by adopting wooden cutlery, bio-degradable coffee cups, and removing plastics from its range of in-flight products.

In 2019, San Francisco Airport launched the Zero Waste Concessions Program, as part of a plan to reduce single-use disposable plastics by transitioning to reusable, compostable, and recyclable alternatives at its restaurants, cafes, newsstands, airline lounges, and vending machines. Travelers are encouraged to bring bottles that they may refill at its hydration stations.

Reducing single use plastics at hotels

The travel industry is growing at a rapid rate on a planet that has limited natural resources. That means all hospitality leaders have a responsibility to stand up and be accountable for making a sustainable difference and achieving measurable results.

Anantara and AVANI Hotels & Resorts ended the use of plastic drinking straws at all hotels and resorts in Asia from January 1, 2018. To replace these, in mountainous region of Northern Thailand, Anantara Golden Triangle Elephant Camp & Resort is working with a local artist, Khamchan Yano, who works with a fast growing, indigenous wild bamboo to make straws. Together they have perfected a way to keep the bamboo strong whilst also ensuring it is hygienic and reusable, thereby eliminating plastic waste.

Hilton will cut its environmental footprint in half and double its social impact investment by 2030. It will reduce carbon emissions by 61%, in line with the Paris Climate Agreement and approved by the Science Based Targets Initiative (SBTi), and reduce water consumption and waste production by 50%. Plastic straws will be eliminated from managed properties and meat, poultry, produce, seafood and cotton will be sustainably sourced.

The cruise line Hurtigruten has banned single use plastic since summer 2018, and its crews and guests collect metric tons of waste every year and are educated and trained in conservation.

Finally, the Japan-based NGO Peace Boat’s a zero-waste ‘Ecoship’ has an eco-system with a closed loop water system that eliminates the disposal of wastewater at sea. Ecoship’s radical waste energy reuse system takes turns heat and cold into energy through integrated heat recovery and reuse.

Hyatt has collaborated for more than a decade with Clean the World, a non-profit that collects used soap and shampoo products from hotels, recycles them, and then donates them to communities in need. Over the past nine years, Hyatt hotels have donated 475,000 pounds of bar soaps and toiletries.

Working with NGO partners such as Clean the World, Hilton will expand its existing soap recycling program to all hotels and send zero soap to landfill. The group has successfully completed its 2019 Clean the World Challenge to collect enough soap before Global Handwashing Day (October 15). This soap will be sterilized and recycled into 2 million new bars of soap for communities in need. Over the last decade 10 years, Hilton properties have diverted 4 million pounds of potential soap waste from landfills.

Another organization taking on the soap waste problem is a French non-profit called Unisoap. This is the first French association to collect and recycle soaps from hotels and transform this potential waste into resources for those in need such as jobs for handicapped workers and provide underprivileged populations in France and abroad with access to hygiene.

While further regulations will surely be announced at COP 25, in today's climate of heightened environmental awareness, responsible management nonetheless gives a marketing edge.