The French hotel industry was counting on the end of health restrictions to finally reboost the activity. That's a done deal, as summer 2021 was much better than in 2020: +47% in turnover for the period from July 1st to August 21st, even if this is still quite below pre-COVID levels (-20.4% in turnover compared to the 2019). The sector is therefore back on track. But locally, the situations are extraordinarily contrasted: while some destinations are reporting solid increases, others are still a long way from getting back to their pre-crisis levels. Here is a complete review of this summer like no other. 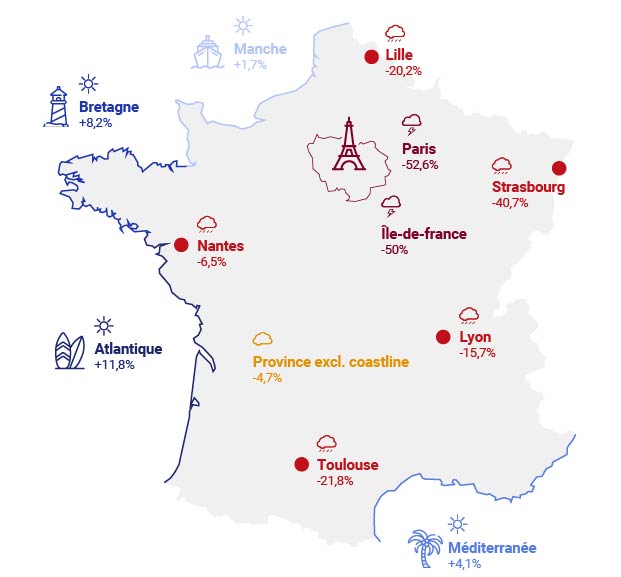 Compared to last summer, the performances of 2021 are up, with a national occupancy rate exceeding 58% on average, and even the symbolic threshold of 60% in open hotels. Thus, the occupancy rate has rebounded by almost 13 points compared to last year, even if it remains 16 points lower than in 2019.

In particular, the month of August marked a real boost for the sector: after a drop by -30.8% in hotel turnover in July, the activity in August (for the period from August 1st to 21st) "only" declined by -8.8%. Over the first seven months of the year (including July), the French hotel industry posted an average of -60.7% in turnover compared to 2019: the improvement of the last few weeks is therefore clear.

The absence of Americans, Russians, Chinese or Japanese in the first half of 2021 is gradually fading and has been largely offset this summer by the French clientele and those from neighboring European countries.

The absence of long-haul travelers, which penalized high-range establishments in 2020, is not as marked this year. The occupancy in 5-star establishments is 20.9% higher than last summer and the same is true for the average price. In fact, August saw a real improvement in the situation in upscale and luxury segments with a 4.7% drop in RevPAR in 5* compared to 2019.

However, as it has been the case since the beginning of the health crisis, the economy and 2-star segments are doing best, with an occupancy rate of 65.4%.

TOURISTS PREFER THE COASTLINE FOR THEIR SUMMER VACATIONS 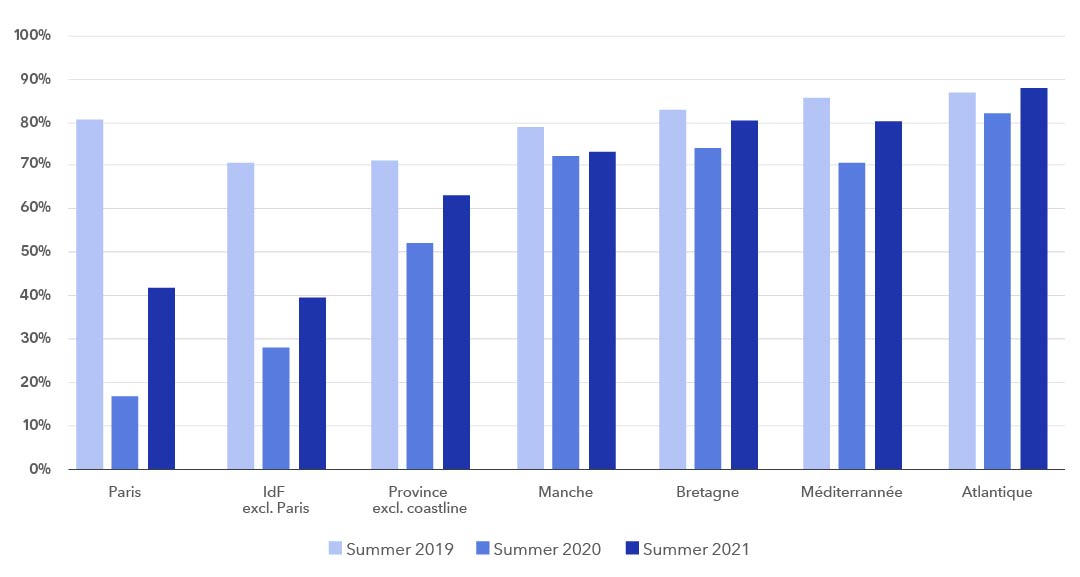 While the results are generally good on the French territory, the results are heterogeneous depending on the region. While the coastline is performing remarkably well, with an average of only -3.1 points in occupancy compared to 2019, and even +7.2% in revenues, Paris is struggling to recover.

Indeed, Paris and the region Ile-de-France, which usually weigh more than a third of the sector's revenue, are still and unsurprisingly, less than half of their pre-COVID levels (-56.2% of turnover in Paris and -50% in Ile-de-France compared to summer 2019), even though the visiting figures are slowly recovering (41.7% occupancy rate in Paris).

Among the coastal areas, the Atlantic coast was again in the spotlight this summer with 88% occupancy, a 0.5-point higher occupancy rate than before the crisis and a RevPAR 11.8% higher than in 2019. Next in line are the Brittany coast (+8.2% RevPAR), the Mediterranean coast (+4.1%) and finally the Channel coast (+1.7%), which already had a very good summer in 2020. 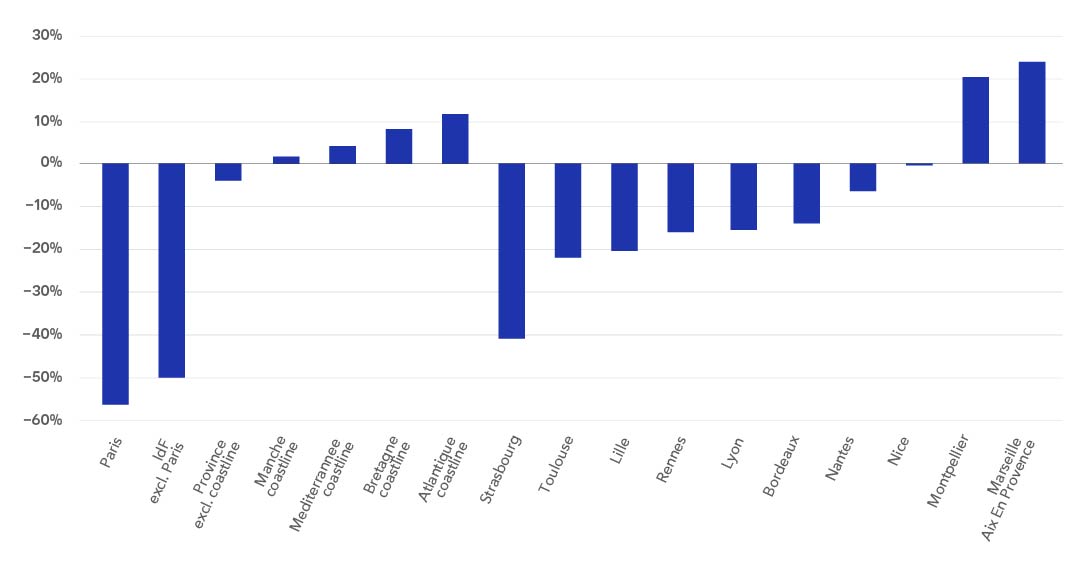 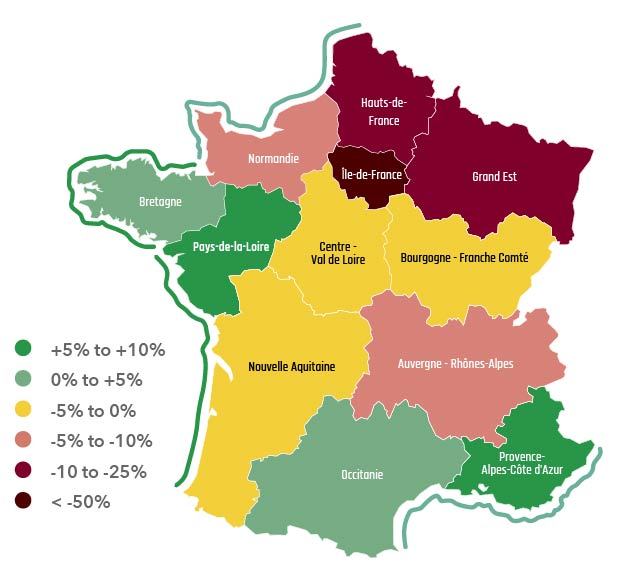 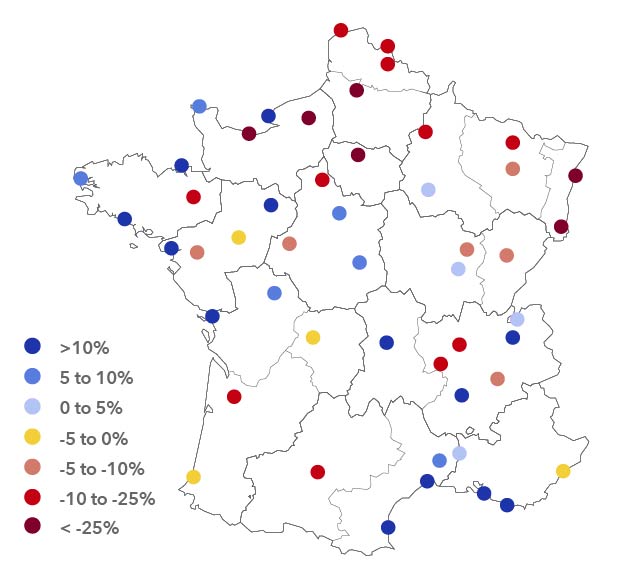 BUT HOTELS IN BUSINESS-ORIENTED AND INTERNATIONAL DESTINATIONS CONTINUE TO SUFFER

However, not all French destinations are fortunate enough to enjoy the same summer appeal. In particular, inland cities, which are more dependent on economic activity than on holidaymakers, remain on the sidelines of this recovery.

And cities where the hotel industry can usually rely on a large international clientele are also still clearly down: -14% compared to summer 2019 in Bordeaux, -28.6% in Caen, -21.9% in Reims... Only Nice & Cannes are at equilibrium (-0.4%), as European holidaymakers and a shift in the event calendar (the Cannes Film Festival took place exceptionally in July this year) enabled to offset the presence of the usual long-haul visitors.

THE COMBINATION OF VACATION DEPARTURES, THE RETURN OF PUBLIC EVENTS AND PRIVATE EVENTS SUPPORTS PRICES

It should also be noted that, more generally, the summer of 2021 in France was characterized by vacations concentrated over a short period of time and which were combined with the return of certain types of events: festivals, sporting events (such as the 24 hours of Le Mans, which were moved from June to August), weddings and other private events that sustained the activity of many hotels throughout the summer.

In the other regions, prices have risen again compared to 2019. Once again, it is the coastline that is driving this phenomenon upwards in the rest of the country, with 9% increase in prices overall but up to +10% to +12% for seaside destinations.

"The summer 2021 is part of the post-COVID hope for recovery in the hospitality sector, even if there are still major contrasts between hotel types and regions. The concentration of demand during the summer has been a real breath of fresh air for hoteliers, who are still worn out after the long months of lockdown.

Thus, never since the beginning of the epidemic has the French hotel industry been so close to its pre-COVID standards, neither in 2019 nor in the average of the last 15 years.

But if the summer of 2021 allowed the hospitality sector to find a second lease of life, the profession is hoping for a great month of September, traditionally one of the most important months of the year (with both leisure and business visitors).

The indicator about bookings for the coming months seems rather encouraging: as of August 23rd, bookings already taken for September, although still low (between 20% and 33% depending on the region), are almost twice as high as last year at the same time. And October bookings are also ahead of 2020. In particular, the calendar of upcoming professional events seems to be richer, as in Lyon where the SIRHA and Pollutec events will be held this year in September & October 2021.

But to what extent will visitors return to these corporate events, and will working people go back on business trips? What proportion of the French population will be vaccinated or will be permanently excluded from the "market" that hotels can address, thanks to the mandatory health pass? Many uncertainties remain. But for now, there is still time to take advantage of this summer's breakthrough in 2021. 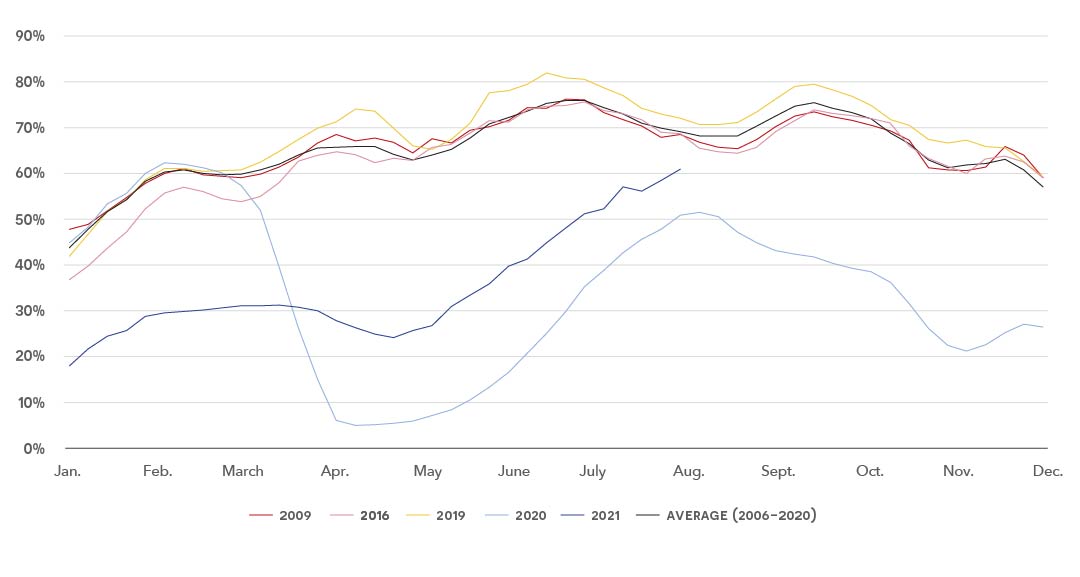 Note: calculations based on the total hotel supply (including closed establishments) 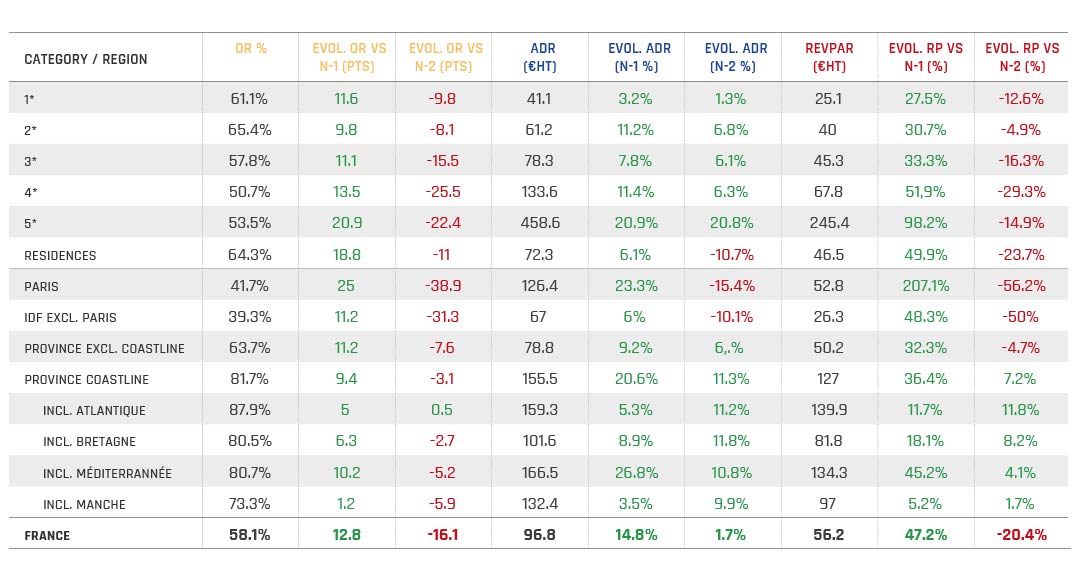