All over Europe, countries are closing their borders, states are quarantining their populations, health measures are being stepped up to deal with the pandemic... while waiting for a return to normality, governments are also taking steps to support the travel industry, which is under severe pressure in the world's leading tourist destination. However, the impact on tourism professionals is severe with no clear visibility on the crisis duration and strength. At the end of February 2020, more than 20,000 people were infected. On March 20th, more than 254,000 are declared infected. The World Travel Organization evaluated the weight of tourism on worldwide GDP as 10.4% in 2019 a powerful growth asset for the global economy.

Outlook of the global situation

Looking back from 2000, one may note how strongly performances increased in most of Western European countries. United Kingdom benefited strongly from the Olympics in 2012 and kept growing from then. In spite of several crisis, French market revealed quite resilient bouncing back later but stronger than some European neighbors. Spain was also on a growing pattern as well as Belgium. The Netherlands have been more stable from 2018. Italy isn’t as performant as other European countries but keep increasing. It is the destination that is the most heavily impacted by the Covid-19 so far being the first epidemic site in Europe.

Although the tourism industry is deeply impacted by the current epidemic as well as many other sectors globally, it is important not to forget fundamental indicators. Looking back at the previous sanitary crisis, SRAS in 2003, the situation is better as worldwide economic situation was in a downturn back then. The situation 16 years ago was far more negative following the Gulf war and the effect of the Internet bubble.

The current effects in Europe and worldwide are important as travels are progressively forbidden everywhere on the globe, and borders are closed. Comparing to prior situations like the terrorist’s attacks that struck Europe in 2015 and 2016, the effect will last longer and affect the tourism activity deeply. In addition, we may not forget that the share of Chinese and Asian tourists in Europe’s touristic ecosystem was much lower in 2003. That is why the impact may reveal stronger in Europe for several weeks.

Leisure and theme parks are closing as Disneyland Paris (more than 15 million visitors in 2018 + more than 7 million visitors at La Vallée Village); or not reopening for the season as Europa Park (more than 5.6 million visitors in 2018). Airline companies are cutting (Ryan Air will cancel almost all its flights as of March 24) or drastically reducing their rotations (Lufthansa and Air France are reducing their mid and long- haul flights). In one word, tourism activity is progressively shutting down. Europe has been in a growth cycle for more than 10 years now, while the previous growing cycle lasted from 2000 to 2008. International tourist arrivals are to grow by +27% until 2030 from 2018. In most destinations, there is still room for more accommodations properties and space to create new concepts. The transaction and investment market were booming with billion euros invested in the hospitality industry included by newcomers attracted by the profitability of the accommodation market prior to the crisis. So macroeconomics indicators are in green. 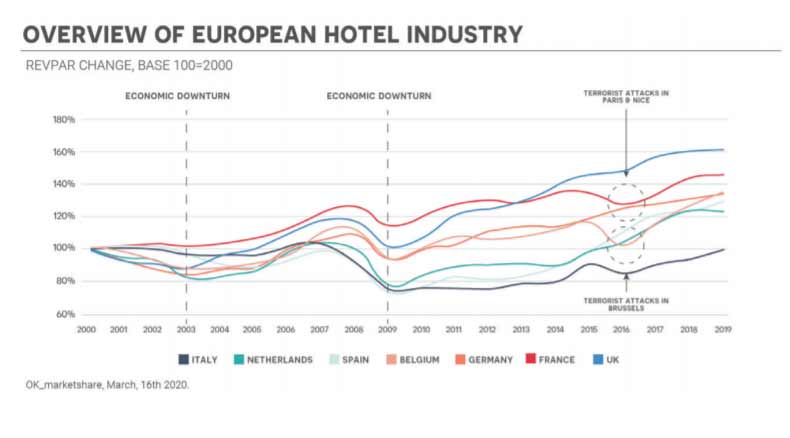 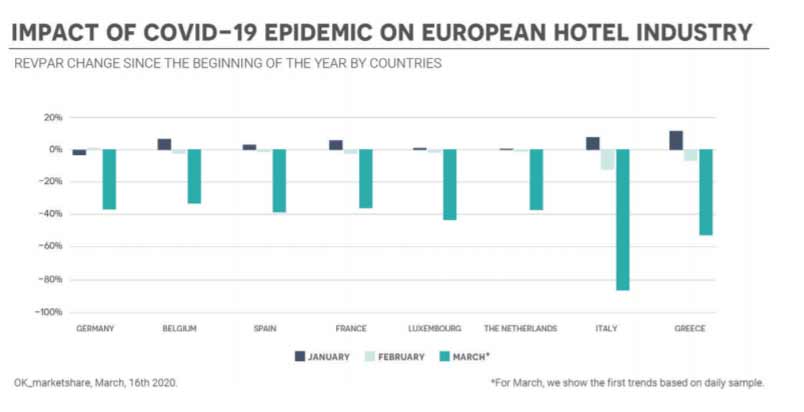 France having been officially contained from March 17th mid-day, the whole accommodation sector communicated with its customers offering them credit notes to postpone their stays. Hoteliers may be proactive, but they cannot avoid severe consequences of the containment measures taken to slow down the spreading of the virus. Thierry Breton, Commissioner International Market at the European Commission, forecasted a loss of 2 to 2.5 points of growth in the European Union following the Covid-19 pandemic.