After an unprecedented year in 2020, 2021 marked the slow recovery of hotel industry performances towards their pre-crisis levels. Several phases can be identified, with the first half of the year still very much affected by COVID restrictions, followed by a second period of clear improvement, driven by the coastal regions and the French province from the summer onwards, and finally a gradual recovery in Paris at the end of the year. Overall, the French hotel industry will close 2021 with a -43% drop in turnover compared to 2019. But the dynamics are more heterogeneous than ever depending on the region and the time of year. What conclusions can be drawn from this?

In 2021, the performance of the French hotel industry once again varied greatly over the months, depending on changes in the health, national and international context. Different periods stand out:

The situation even improved in the last three months of the year, with leisure demand remaining solid during the holiday periods (All Saints' Day and New Year's Eve) and business demand gradually increasing. The decline in national activity thus fluctuated between -15% and -20% depending on the month compared to 2019, although it should be remembered that the basis of comparison for the end of 2019 had been degraded by the impact of the "gilets jaunes" and transport strikes on the hotel industry.

This has once again shown the greater resilience of the economy segments compared to the higher ranges. Indeed, the activity of the latter is much more based on international customers (especially long-haul) or on trade fairs and conventions. In the absence of these usual demand drivers, these establishments have had more difficulty in returning to results close to their 2019 levels.

Conversely, the budget and economic segments are traditionally the most resilient in times of crisis, and the COVID-19 is no exception, even if the magnitude of the decline in activity remains significant.

During the first "waves", budget and economy hotels were used to accommodate workers in the "front line" of the fight against the epidemic (health personnel, transport/logistics clients, etc.) and/or specific groups (families of the sick, patients in quarantine, the poorly housed, etc.). Then, their activity rebounded more rapidly, in concert with the return of business demand in key sectors, such as construction, as soon as building sites were able to resume, and finally with the return of French leisure travel for holidays and weekends in France.

This has enabled entry-level hotels to partially cushion the considerable drop in turnover over the year 2021. This still amounted to -25.7% in budget hotels and -36.5% in economy hotels (compared to 2019). The midscale hotel sector (-44.1%) suffered more, while the top-upscale & luxury hotels lost more than half (-54.4%) of their turnover.

However, these results are still an important improvement compared to fiscal year 2020, and fall 2021 saw a significant improvement in the upscale and luxury hotel sector, with both a recovery in occupancy and a rebound in prices above 2019 levels, while the other segments stabilised.

In the same way as for segments, not all territories have suffered the impacts of the pandemic with the same severity.

The Parisian region, a heavy weight on a national scale since it normally represents no less than 38% of the turnover of the French hotel industry, recorded the heaviest loss (-60.1%) in 2021. Within the region, it is the city of Paris that has suffered the most from the crisis over the whole year (-62.5% against -56.2% for the rest of the region) but also on a monthly basis over the major part of the year (January-September).

However, the dynamic has changed since October, with the recovery becoming faster in Paris than in its suburbs thanks to the faster return of leisure customers to the capital, and at the end of the year of foreign customers. At the same time, the recovery was still more modest with business customers, who are predominant in the rest of the Ile-de-France region.

WEIGHT OF EACH REGION IN NATIONAL TURNOVER IN 2019

Conversely, the provinces proved to be much more resilient than Paris and its region. Indeed, the regions were able to take advantage of the significant size of the French domestic market to maintain a certain level of activity, particularly during the summer and more broadly during the second half of 2021.

ANNUAL CHANGE OF HOTEL INDICATORS BY REGION IN 2021

However, the dynamics are also very different from one region to another. The Grand Est region was the most affected, excluding the Parisian region, with a -33.9% drop in revenue per room over the year: it suffered from being more strongly affected by the epidemic, then by the impact of the drop in its neighbouring customers from Germany and the Benelux countries. Then comes Auvergne-Rhône-Alpes (-30.8%), affected in particular by the absence of an alpine skiing season, which remains the dominant attraction of the major mountain resorts, and by the lack of business events in its major cities. The Hauts-de-France and Provence-Alpes-Côte-d'Azur regions follow with a 30.3% and 30.0% drop in hotel revenue respectively.

On the other hand, the three regions that fared best in 2021 were those of the North-West of France: Brittany with "only" -16.7% compared to 2019, Centre-Val de Loire (-21%) and Pays de la Loire (-22.3%). These are three regions with both a high potential for leisure tourism, with their coastal facades and the Loire Valley, and with a domestic-dominated clientele.

Refocusing on the second half of 2021, which is more representative of the latest trends, the coastal regions largely dominate the ranking, occupying 5 of the top 6 places. Brittany was even able to achieve a better second half of the year than in 2019 before the health crisis, with a 3.4% increase in RevPAR over this period.

In terms of visitor numbers, the coastal regions generally dominated the years 2020 and 2021 with monthly occupancy rates higher than those of the Île-de-France and most of the time than the whole of the French province.

Over the full year, the decline in RevPAR in the various coastal areas ranged from -11.4% compared to 2019 on the Atlantic coast to -31.3% on the Mediterranean coast, which is the most dependent on foreign customers. Outside the coast, the French hotel industry recorded a -45.4% drop in RevPAR. The high mountain resorts suffered more particularly from a winter without skiing activities, with a decline of -61.8% over the year. 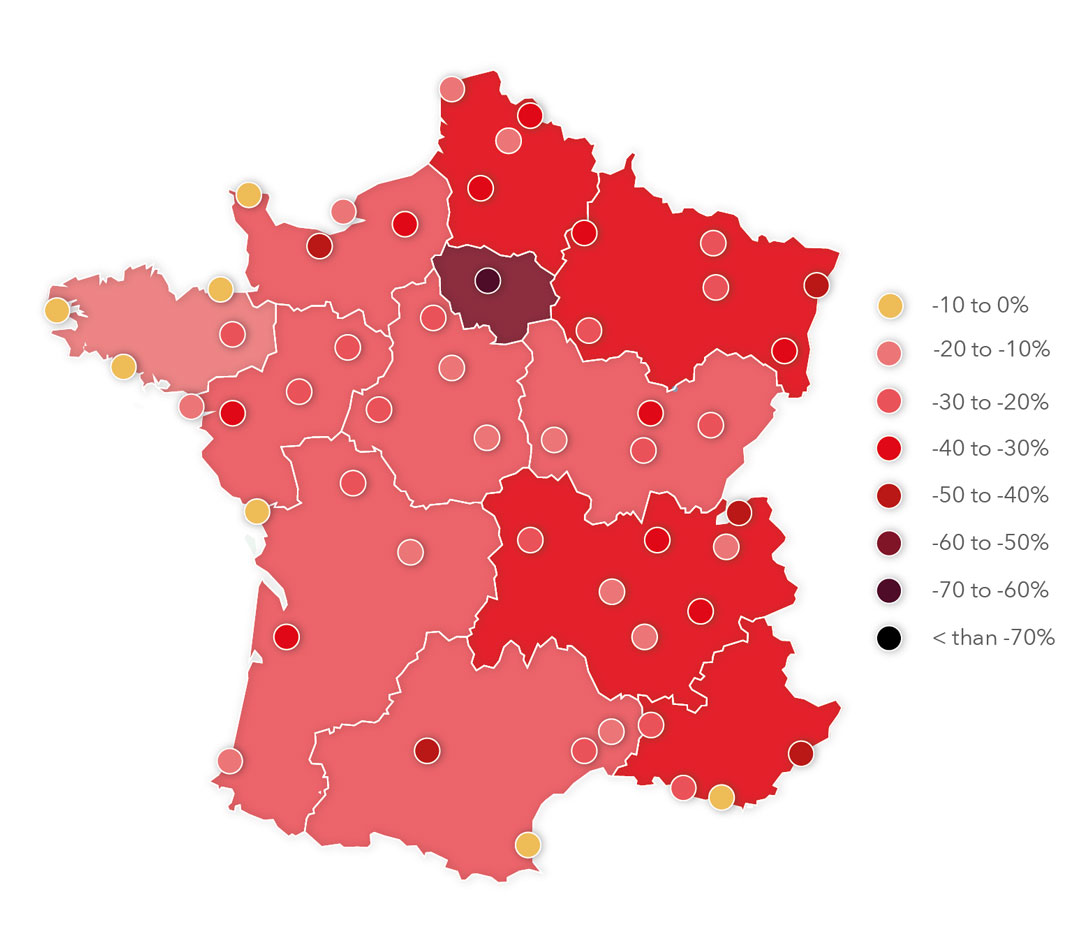 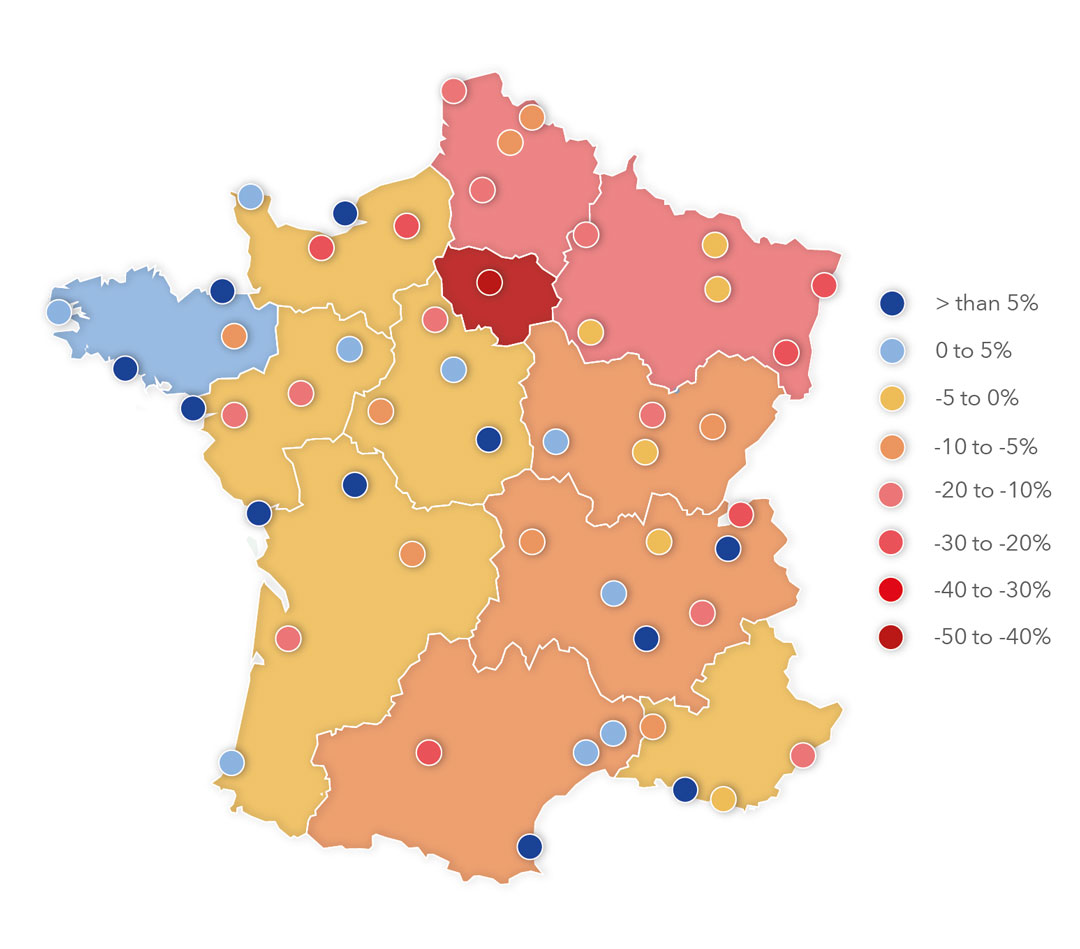 Due to their clientele profile, the impact of the decline in air traffic and the cancellation of events (congresses, trade fairs, etc.), the major cities have seen their RevPAR fall sharply in 2021, albeit to a lesser extent than in 2020.

Paris, Strasbourg (-43.9%), Toulouse and Nice (-41.6% each) have suffered particularly badly. The lack of foreign customers, events in Paris, European parliamentary sessions in Strasbourg, long-haul customers in Nice and Cannes, and the global context of the airline sector in Toulouse have amplified the drop in hotel activity.

Buoyed by the faster return of domestic leisure customers (holidays & weekends), it is both the coastal regions and coastal metropolitan areas that have recorded the least negative performances over the course of the year, and even the most positive if only the second half is considered.

Conurbations such as Marseille-Aix, Toulon, La Rochelle, Saint-Malo, Perpignan, Poitiers (Futuroscope), and Annecy have all reported increases in activity in the second half of 2021 compared with the same period in 2019, even if the overall result for the year remains negative. Port or shipyard cities such as Le Havre, Brest, Lorient, Cherbourg, and Saint-Nazaire also reported a positive second half of the year and an above-average full year in 2021.

Compared to its European neighbours, France recorded the smallest decline in activity over the year 2021 (-43.0%), while other countries were much more affected, such as the Czechia, still at -77.4% of its pre-crisis standards, or the Netherlands at -71.9%.

France is ahead of the United Kingdom, where hotel revenues fell by 47.6%, while Germany recorded a much steeper annual decline (-63.1%), mainly because the end of the year was more difficult there.

The Delta and then Omicron variants hit from December onwards and affected certain European countries, notably Germany where the decline in hotel activity rose from -46.9% in November to -60.0% in December, and the United Kingdom, which fell back to -27% compared with -14.6% in November, which had been marked by the hosting of the COP26.

The impact of Omicron arrived later in France and Luxembourg. Their hotel performances continued to increase in December compared to November, supported by the Christmas holidays. However, the wave is still to come: over the nights of 6-12 January 2022, the decline in revenue per room in the French hotel industry fell back to -29.9% on average compared to the same period in 2019.

For the European hotel industry, 2021 was a year of recovery compared to 2020 and France was at the forefront of this recovery, particularly in the second half of the year, which brought hope. But over the full year, French hotel revenues remain 43% lower than those of 2019, and the Omicron variant, which has already impacted the hotel industry of most of the European countries in December, will be a source of concern for the beginning of 2022.