As of January 1, 2018, the corporate hotel chains supply is down slightly. The wide disparities observed last year should be a thing of the past with the stabilization of the economy, mid-scale and high-end segments, while the budget segment is losing ground. The overall evolution of the leading groups and brands is very contrasted, while mid- and bottom-tier players are regaining momentum.

T he number of corporate hotel chains as of January 1, 2018 was down -0.3% compared to the previous year. The disparities observed in 2017 are narrowing to leave room for the stabilization, or even stagnation, of the economy (+0.2%), midscale (+0.1%) and high-end (+0.4) categories. The decline in the budget segment (-1.4%) can explained by the many departures from AccorHotels’ HotelF1 portfolio. While the economy supply is stabilizing with the growth of brands such as Brit Hotel or Campanile and the shrinking of brands such as Comfort Inn by Choice or Balladins by DMH, there is no significant movement among mid-range brands such as Mercure, Novotel or Best Western. The upmarket segment continued to gain ground with thirteen new properties (+157 rooms) including the development of the charming hotels by Qualys (SEH) and the soft brand Curio by Hilton. Overall, the supply of French chains lost 810 rooms, or 23 properties. The top-ranking groups maintain their positions despite numerous closings, renovations or brand changes, while those in the middle of the ranking, especially between the top 10 and top 20, benefit from the free fall of certain chains to boost their positions. The British IHG and the American Hilton gained one to three positions, benefiting respectively from the doubledigit declines of Choice (-13%) and Paris Inn (-17.1%). AccorHotels retains first place in the ranking despite a decrease AccorHotels retains first place in the ranking despite a decrease in capacity, corresponding to a net loss of 4,466 rooms (-49 establishments). The French group, which posted a 2.0% increase last year, is suffering from many departures from its HotelF1 portfolio (-27.4%), the renovation of Pullman Montparnasse (957 rooms) and the change of Pullman Marseille Palm Beach (160 rooms) to NH Hotels, representing a -34.7% decline in the Pullman brand. With 142,210 rooms in its French hotel portfolio, the market leader recorded an annual decline of -2%, but outperformed the rest of its competitors by representing 39.3% of the corporate chain supply. This growth remains essentially driven by its umbrella brand ibis Mega Brand, with continuous and strong development of its supply, i.e. 14 new ibis Styles (+145 rooms) and ibis Budget (+142 rooms) properties. After a relatively stable year in 2016 (+100 rooms), Mercure adds four units for 244 additional rooms (+1.1%) while Novotel (+2.1%) stabilizes with growth by three properties (+358 rooms). The other signs (Sofitel and Mama Shelter) remain stable with one brands opening for each brand in 2017. Adagio apartments, jointly owned by AccorHotels and Groupe Pierre & Vacances-Center Parcs, decreased by -1.9% with the loss of two properties (-146 rooms). 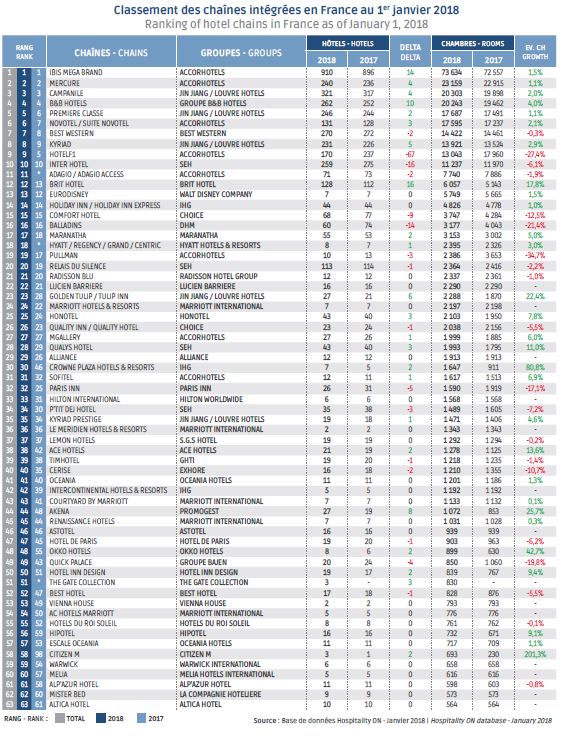 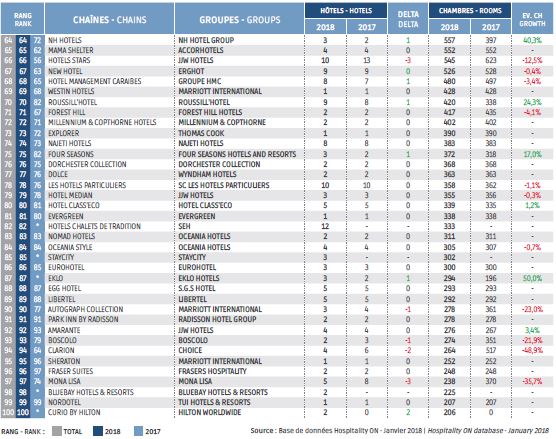 Louvre Hotels Group confirms its position as the second largest hotel in France, representing a significant market share with 55,670 rooms in operation as of January 1, 2018. After several years of stability, its capacity in France is back to a growth trend with the acquisition of 1,481 rooms, representing a 2.7% increase in its supply. All its brands are gaining keys and growing in medium-sized cities or on the outskirts of urban areas. Its flagship brand Campanile remains third in the ranking with growth by four hotels (+405 rooms), including the new property in Rouen and the renovation of its unit in Le Mans. The group’s other brands saw their capacities grow, notably Golden Tulip and Tulip Inn, with an increase by 22.4% or 418 additional rooms in six new properties in Thionville, Saint-Witz, Roscoff, La Baule and Saint-Malo. In addition, Kyriad and Kyriad Prestige continue to expand their offerings with growth by +2.9% and +4.6% respectively, while capacity in First Class rooms is stabilizing with two new properties (+196 rooms).

The dynamic development of B&B Hotels enabled it to maintain its third place in the ranking with +4.0% growth. Parallel to its international expansion, the brand’s French portfolio of hotels grew by ten properties (+781 rooms). Since 2015, the budget chain has acquired 3,224 rooms and is continuing the growth dynamic it began in 2012. While last year’s growth was concentrated in the Paris region, the new units acquired were spread throughout the country, notably in Lyon (+69 rooms) and in less popular markets such as Bessoncourt, located in the department of Belfort (+47 rooms).

With 17,416 rooms, Société Européenne d’Hôtellerie (SEH) ranks fourth, despite a moderate decline by -2.1%. The decline of its Inter-Hotel flagships (-6.3% or a loss of sixteen properties equivalent to 733 rooms) and P’tit Déj (-7.2% or three properties with 116 keys) explains the drop in its economy supply. The slight contraction of Relais de Silence (-1.1%) was offset by the development of its other premium brand, Qualys (+11.0%, or 198 rooms), and the acquisition of Chalets & Hotels de Tradition with twelve establishments and 333 keys concentrated in Savoy and Upper Savoy.

The American group Best Western, which recorded a doubledigit loss (-10.5%) in 2017, is stabilizing and remains in the top 5 with a focus on diversifying and breaking down its portfolio into segments within the Best Western umbrella brand. Its capacity in France is down (-0.3%) with a loss of 32 rooms despite the development of its upmarket brands Best Western Premium: Best Western Plus (+ 7 establishments) and Best Western Premier Collection (+ 3 establishments). For example, the change of the brand name of Best Western Premier Maison Albar Paris Opera Diamond (37 rooms) to Best Western Premier Collection (72 rooms) should be noted. Marriott International maintains its ranking in sixth place after considerable growth in recent years, notably due to the integration of the Starwood Hotels & Resorts portfolio. With the departure of an Autograph Collection property (-82 rooms), the No. 1 worldwide has seen a decline in capacity in France (-1.0%). In addition, Courtyard by Marriott (+0.1%) and Renaissance Hotels (+0.3%) remained stable and did not record any significant changes.

InterContinental Hotel Group posted double-digit growth by +11.3% and snatched seventh place from its American counterpart Choice Hotels. The Crowne Plaza brand (+80.8%) leads the way with two new properties (+736 rooms), notably the takeover of the management of the former Mövenpick Paris Neuilly (281 rooms). In addition, growth was slight for Holiday Inn / Holiday Inn Express (+1.0%) with 48 additional rooms while its luxury brand IHG shows no change. Choice Hotels continued to shrink, dropping from seventh to eighth position, and recording a loss in its supply by nearly -13%, corresponding to a net balance of twelve properties (i.e. a loss of 1,649 rooms at 24 properties since 2016). With the exception of Ascend Collection, all of its brands positioned in the mid-range and high-end segments have regressed. The evolution of the Clarion (-48.9%) and Comfort Hotel (-12.5%) chains illustrates the negative trend with a loss of 790 rooms in France compared to the previous year. Among the most notable losses were the conversion of Clarion Hotel in Antibes to Beachcomber Hotels and the departure of Clarion Paris Sud, for a total loss of 312 rooms. The American franchiser continued to erode its strong growth of 2016 (+12.7%) with a total decrease by -908 rooms in three years.

Brit Hotel pursues its momentum by expanding its fleet by adding 16 addresses (914 rooms). The network of independent French hotels climbed a rung to ninth place, ousting the American Walt Disney Company. The conversion of its properties formerly operated under other brands, notably Inter-Hôtel and its new buildings such as Brit Hotel Loches in the department of Indre-et-Loire, enabled it to achieve double-digit growth for its French hotel portfolio (+17.8%).

The leading entertainment group worldwide remains in the top 10 with slight growth by +1.5%, thanks to an increase by 84 additional rooms, for a total of 5,749 hotel rooms, despite the absence of new properties. Dynamique Hotels Management (DMH) retains its eleventh place in the ranking despite a double-digit drop by -22.4% (equivalent to a loss of 866 keys), to a total of 3,177 hotel rooms. Balladins had 8,138 rooms in 2008, a total loss of 4,961 rooms. In ten years, the French brand has lost 60% of its offer.

Oceania Hotels expanded its presence in the market with 21 new rooms (+0.8%), Radisson Hotel group lost 24 keys under its Radisson Blu brand (-0.9%) while Lucien Barrière and Alliance stabilized and all retained their respective positions. Hilton climbed two positions and robbed 18th position from Paris Inn. The American giant recorded an 4.1% increase for 206 additional rooms in its portfolio. This growth highlights the arrival of the premium brand Curio in Paris and in La Seyne-sur-Mer. At the same time, Paris Inn lost five properties (-519 rooms) and dropped to last place with a loss of -17.1%. Parallel to the development of its portfolio in China and the sale of hotels in France, the launch of the group’s new brand Maison Albar does not allow it to continue the positive growth trend recorded in 2017 (+6.0%).

Hyatt Hotels and Resorts (+3.0%), meanwhile, opened its first Hyatt Centric in Savoy in 2017. Honotel (+7.8%) moved hotels under its own Happyculture brand that previously operated under other brands, notably Quality or Best Western. The same applies to Maranatha (+5.0%), which nonetheless ceased its real estate acquisition policy due to the receivership of its holding company.

In addition to the Top 20, in an effort to “revolutionize” the hotel sector, the Dutch brand Citizen M posted +201.3% growth, surging ahead by 40 places with two new properties (+463 rooms). Already established at Roissy Charles-de Gaulle airport and La Défense, the hotel group has its first urban address in one of the Gamma towers in Lyon.