The top five hotel groups in the UK remain unchanged in 2021. Still, the dynamics of development diverge between operators and territories.

The leading hotel group, the British Whitbread, continued to grow in 2020 in its domestic market, with a net gain of more than 1,300 rooms, increasing by 1.7% compared to the previous year. Premier Inn continued to grow but at a more moderate pace (+1.4%), gaining seven properties and 1,087 rooms in the year. The group expanded its portfolio of new brands with a new unit to the Hub by Premier Inn network in London’s West Brompton district and the launch of the new ZIP brand that opened its first 138-room hotel in Cardiff.

For IHG, which ranks second, movements offset each other, which keeps its number of rooms constant. This year, the most prevalent brands are also among the most dynamic. Holiday Inn and Holiday Inn Express have increased their room supply by 2% by rebranding unbranded hotels and launching new extensions. Also of note is the rise of the Kimpton brand. Thanks to the opening of its first unit in Manchester, Kimpton recorded the most substantial relative growth at the group level. Another significant relative expansion comes thanks to the development of Indigo in Bath. On the other hand, Crowne Plaza and Voco recorded a decline in the number of properties, mainly due to closures for renovation work.

Just behind the three British companies, the French group Accor continues to grow at a moderate pace. Its portfolio increased by three hotels to gain a 1.3% expansion of its rooms in 2020. The slight decline in the Mercure brand and the closure of an MGallery in Milton Keynes have been more than offset by the openings of an Adagio-Novotel combo in Leicester, two ibis Budget hotels, and the first British Mama Shelter in London.

In the fifth position, Hilton saw its number of rooms increase slightly (0.9%) thanks to the diversification of its portfolio. The American operator accelerated its development by focusing on the economy segment with Hampton (+4 units +14%) in London, Manchester
and Blackburn, and by converting ex-Hilton units into DoubleTree. In contrast, the group has significantly reduced its exposure to the Aberdeen hotel market.

It is noteworthy to examine how dynamics vary across regions. While London remains a safe bet and hotel chains have continued to develop in major cities (i.e., Manchester, Glasgow, Cardiff) and the South of England (notably in Dover), other regions have suffered more. For instance, Aberdeen, a market very much linked to the oil sector, has seen a decline in the supply of large chains (-2 DoubleTree, -1 Holiday Inn Express, -1 Garden Inn), in some cases through outright closures. 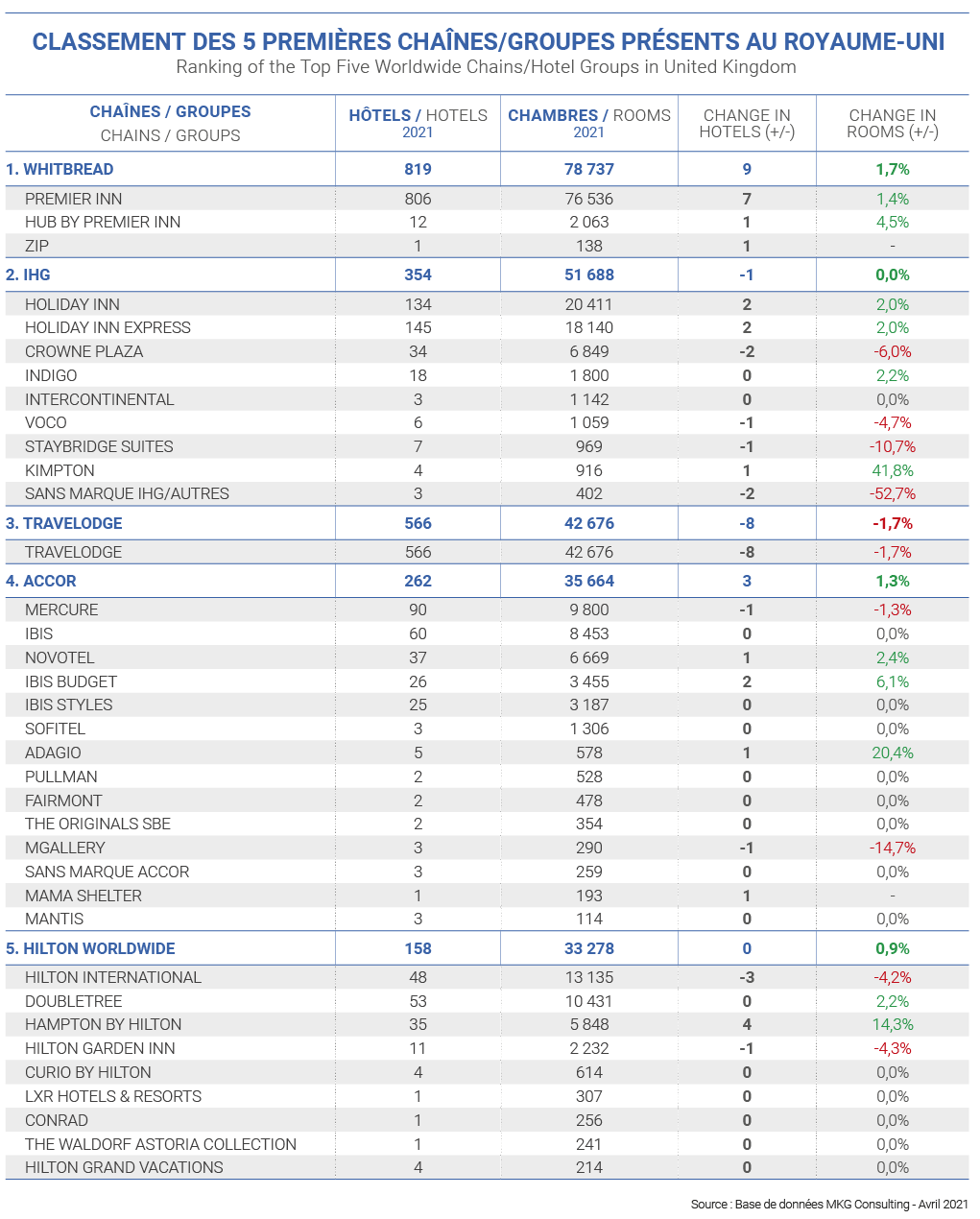