The ranking of hotel groups in Germany underwent a significant change: Marriott has overtaken IHG and seized the number two spot. The American operator, which had already surpassed Best Western in 2020, has thus climbed two places in just two years. In the Top 5, the three European operators fell back, while the two American ones made good progress.

The number one, Accor, is losing ground slightly but remains a solid leader with 365 hotels and more than 50,000 rooms, compared to the 20,000 of its closest competitor. Despite a few openings, the group saw its German portfolio shrink by 0.8% in terms of rooms compared to last year. Mercure, the most prevalent brand nationally, saw five of its units change brand while a new unit opened in Lübeck. The French group’s decline was also due to the ex-Sofitel Berlin Kurfuerstendamm, a Novotel in Gera, and a Pullman in Aachen leaving the portfolio.

But if the loss of ground is limited for the French giant, it is thanks to the openings of a hotel under the Mövenpick banner (+16.2%) in Stuttgart and three ibis Styles hotels (+8.6%). In addition, another hotel has entered the group’s fold but has not yet joined one of the chains.

Marriott, for its part, has climbed the ladder remarkably well. The giant has recorded the highest annual growth (+8.3%) in its room inventory and a net gain of nine hotels. This increased growth has enabled it to surpass the British IHG. Unlike its peers, Marriott did not see any closures in 2020. On the contrary, the Autograph Collection brand saw its portfolio grow with two new units in Frankfurt and Hamburg. However, the Tribute Portfolio brand recorded the most considerable growth in rooms (+68.1%) thanks to its new 128-room property in Frankfurt. Two Moxy hotels opened in Hamburg and Essen.

IHG’s decline (-3.6%) was partly caused by a high number of movements in the Holiday Inn Express portfolio, which resulted in the exit of 13 large-capacity units in major cities. These departures were notably due to the liquidation of Tidal Operations Germany, which Westmont took over in March 2021. This one-off decline was offset by the opening of eight new Holiday Inn Express properties during the year.

In 4th place, Best Western’s hotel supply remains relatively stable compared to 2020 (+0.2%). The group capitalizes on its new brands while its historic brand is losing ground. Indeed, while the number of rooms in Sure Hotel, Sure Hotel Collection and Best Western Signature Collection is exploding (x4, +83.9%, and x5), Best Western is losing 8.1%.

Finally, Wyndham Hotels recorded positive growth in room supply (+3.2%) despite the loss of one hotel. This positive development was driven by the opening of two new Super 8 units in Augsburg (154 rooms) and Mainz (216 rooms) and by the expansion of Trademark and H Hotels. The number of properties decreased due to the exit of four Tryp hotels from the portfolio. 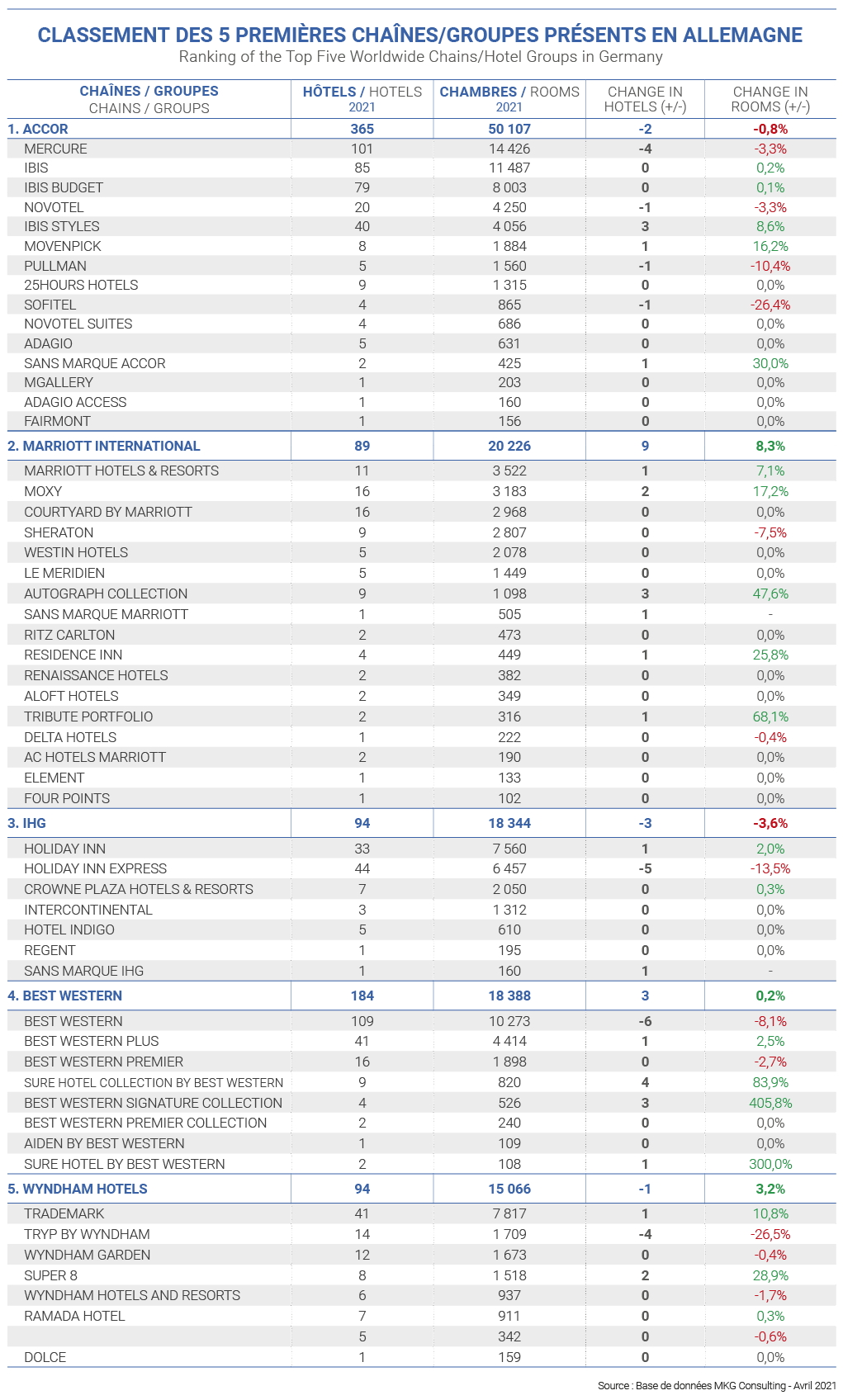