The leading 10 hotel groups maintain the exact same ranking as in 2017.

The colossus Marriott International holds onto its uncontested leader position with growth in its room supply by +5.6% (after 5.5% growth in 2016) to reach at end 2017 1,235,512 rooms, far ahead from the second in line Hilton Worldwide which also maintains stable growth with its room supply up +6.5% to 848,014 keys. The strength of its portfolio is reflected with the development of its brands Hampton by Hilton (+14,220 rooms), Garden Inns (+8,652 rooms), Home 2 Suites by Hilton (+7,666 rooms) and the arrival of the Tapestry Collection and Tru by Hilton brands.

The challenger, Wyndham Hotel Group strengthened its supply with the acquisition of La Quinta, the growth of its Wyndham Hotels & Resorts brand (+4,356 rooms) and of its Baymont Inn & Suites franchise (+3,687 rooms) as well as the arrival of its Trademark soft-brand. Despite this strong external growth (+13.9% i.e. 794,572 rooms), the American group did not surpass its British competitor.

InterContinental Hotel Group thus maintained its third place position place in the ranking with accelerated expansion of its hotel portfolio (+4.0% or 798,075 rooms), essentially due to growth in its economy supply with Holiday Inn Express (+15,389 rooms). The group is also developing a soft brand – voco – and is relying on its brand development. 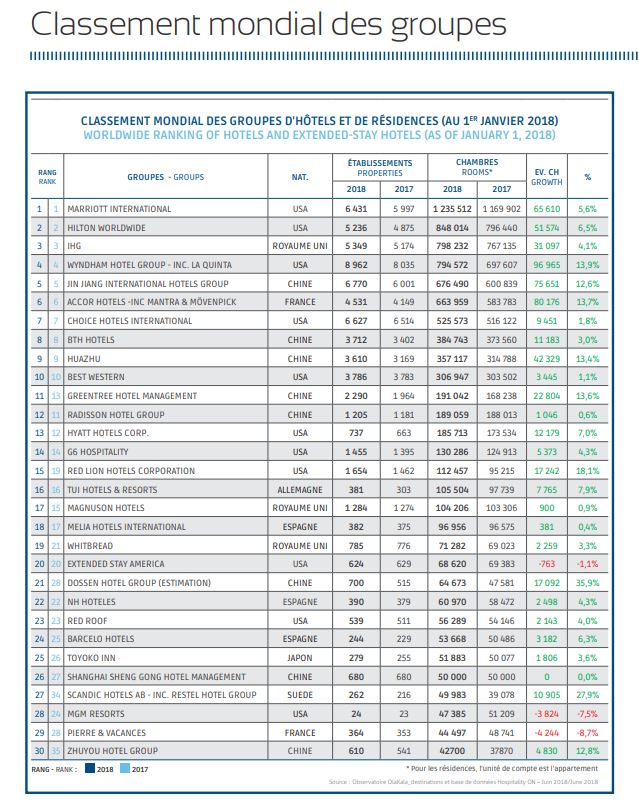 This year, Jin Jiang recorded an increase in capacity by +12.9%. Thanks to its expansion in Asia (Vienna Hotels: +41,452 rooms, 7 Days Inns: +24,947 rooms), the takeover of the Indian company Sarovar Hotels (+1,094 rooms) and the voluntary label Hotels & Préférence, the Chinese group reached 680,000 rooms. The Chinese group clearly shows its will to become global leader by 2023 and produced strong organic growth in 2017 by developing its portfolio parallel to takeovers. It will nonetheless be necessary to double its supply in 5 years to sidle up to the leader – an ambitious goal considering the 900 projects for openings planned between 2018 and 2020. The group’s striking force nonetheless makes it a serious challenger.

After rather moderate growth last year, AccorHotels enters a new growth dynamic (+12.5%) with the acquisition of the Australian group Mantra (15,205 rooms) and the Swiss group Mövenpick (21,003 rooms). The French group continues its momentum through equity investments (Banyan Tree and Rixos) and acquisitions of platforms such as Availpro, VeryChic and most recently ResDiary. Following the announcement of agreements concerning the sale of a majority stake in AccorInvest, AccorHotels signs a merger with Huazhu, whose 4.5% stake in the capital will take the form of the purchase of 10.8 million shares.

Choice Hotels International maintained its seventh place in ranking and recorded slight growth (+1.8%) with progress in each segment: the midscale segment with Quality Inns (+5,117 rooms), the upscale segment with Ascend Collection (+3,506 rooms) and the economy segment with Rodeway Inn (+1,972 rooms).

In addition, Greentree Hotel Management (+13.4%) has shaken up the hierarchy by climbing two places in the ranking of global operators. The Chinese group grew its Green Tree Inns (+13,068 rooms) and Shell Hotel (+2,927 rooms) brands.

Best Western continues to see a decrease in its hotel supply. After a negative balance of approximately 8,000 rooms in 2016, the American group is stabilizing by losing only -0.6% of its supply. The launch of its new brands Vib, GLo and the white brand SureStay, together with the acquisition of Sweden Hotels, sets the stage for great ambitions for the years to come.

This year, Radisson Hotel Group lost one place and recorded organic growth of 0.6%. Despite the growth of its midscale brand Country Inn & Suites by Radisson (+964 rooms), its umbrella brands Radisson (-29 rooms), Radisson Blu (+412 rooms) and Radisson Red (+437 rooms) do not allow it to stand up to the rise of its Chinese competitors.

Nevertheless, competition continues to strengthen with the moderate growth of Hyatt Hotels Corporation over the past two years (+7.0% in 2017 and +7.0% in 2016) and the future of Whitbread, whose main priority is to focus on the Premier Inn hotel chain following the closing of Costa. That could change the ranking for the coming years.

Further down in the ranking, RED Lion Hotels Corporation posts double-digit growth in its supply pushing it from 95,215 rooms end 2016 to 112,457 rooms end 2017. Dossen Hotel Group is significantly increasing its supply after partnering with Marriott Hotel Group to develop the brand Fairfield in China.

The Spanish group NH Hotel Group has attracted the attention of Minor Hotel International as well as the interest of Hyatt Hotel Corporations, and is pursuing stable growth by 4.3% to reach 60,970 keys. The Spanish brand shows a strong will to develop, particularly in France where it plans to open 5 properties end 2018; it is the desire of the Southern Europe director Hugo Rovira to have 20 properties under the NH brand in France by the end of 2020.

Scandic Hotels climbed 5 places prior to the takeover of Restel Hotel Group and develops its supply by +27.9%, flirting with 50,000 rooms in Scandinavia.

How to adapt your tourism offer to the LGBTQI+ community?