A revolution is both a major change that disrupts the established order and a complete reversal that brings us back to the starting point: these two dynamics are exactly what the hospitality sector has gone through in recent months. The COVID-19 crisis has profoundly disrupted the finances and economic hierarchy of hotel groups, confirming in particular the rise in power of certain Chinese players. However, Western companies have almost managed to get back to the valuation levels achieved in the pre-crisis period, and are still ahead of the game thanks to their financial strength. They have implemented different strategies to raise cash, and some have solid reserves preparing them for the future, where they will have to deal with some impressive new players. 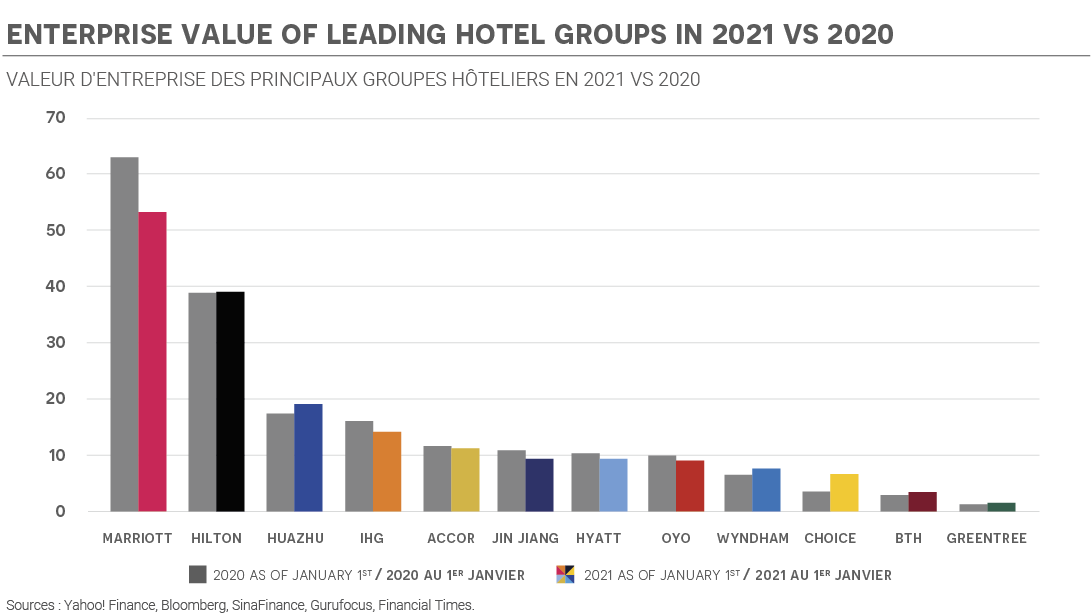 The American giant Marriott keeps its title of global champion in the sector in terms of rooms (1.4 million worldwide), profitability ($1.1 billion adjusted EBITDA in 2020) and enterprise value (over $53 billion as at 1/1/2021). However, while Marriott unquestionably dominates this ranking, the group has seen its financial valuation level decline between January and December 2020 (-15%), a fact attributable to the financial storm triggered by the global COVID-19 pandemic.

The 2nd financial champion of the hotel industry, Hilton, is also American. Its enterprise value of $39 billion is also justified by a supply of more than one million rooms in 2020, and its valuation is almost twice as high as that of the #3.

But behind these two uncontested leaders, the financial hierarchy is changing. While most Western hotel groups have at best kept and more often slightly fell in value, Chinese operators such as Huazhu and Jin Jiang have seen their valuation levels surge in 2020, even though they had not particularly suffered in 2019 from the earlier onset of the epidemic on the Chinese market.

As a result, in the ranking of hotel groups by financial value, Huazhu has risen to the third place, ahead of IHG and Accor. Indeed, while Accor lost a quarter of its enterprise value in 2020, Huazhu’s business value almost doubled.

This rise is partly due to the acquisition of Deutsche Hospitality by Huazhu, but also to a considerable increase in the group’s supply (+22% compared to the previous year / +100K rooms) and various financial factors detailed hereafter.

In the same vein, Jin Jiang rose to 6th place, overtaking the US-based Hyatt, Wyndham and Choice, and approaching the symbolic threshold of $10 billion in value.

The year 2020 has of course been full of upheaval and the hotel industry has faced one of the biggest challenges ever.

The COVID-19 pandemic triggered the fall of hotel performances worldwide to historic-low levels. At the same time, stock markets and hotel group valuations plunged sharply in the first quarter. Hotel group targets and expectations were reconsidered as lockdowns, travel bans and hotel closures were implemented to limit the spread of the virus.

However, while the hotel industry was strongly affected throughout the year, stock markets in general and hotel group shares in particular recovered during the year, making it possible to cut losses. However, the speed of recovery of the leading groups’ performances seems to depend on their domestic market.

While the fall at the beginning of 2020 was more or less common to all hotel groups, the second half of the year showed a gradual recovery by Chinese operators, who then regained the advantage over their Western counterparts. Jin Jiang took the lead with a market capitalization that has more than doubled (+111%) followed by Huazhu (+58%) and BTH Hotels (+31%). This early recovery can be explained by the timing of the health crisis and the faster recovery of travel in China, especially since the country remains moderately exposed to demand from international customers.

On the other side of the Pacific, after experiencing a shock at the beginning of the pandemic, the Americans have globally recovered from the end of the year.  Among them, Wyndham followed by Hilton and then Choice have completely erased their losses and have even progressed in terms of market capitalization in comparison to January 2020.

In Europe, however, the year was rather nightmarish from start to finish. While IHG was able to recover at the end of the year, Accor remained low, leading the French giant to be removed from the CAC 40 index in September.

Overall, this year has been marked by the rise of Chinese groups, the resilience of American groups, and the relative loss of economic weight of European players. Will they be able to catch up in 2021?

In this particular market context, groups have unavoidably been forced to review their costs, to fight against a decline in their profitability and to reduce the speed at which they burned their cash. 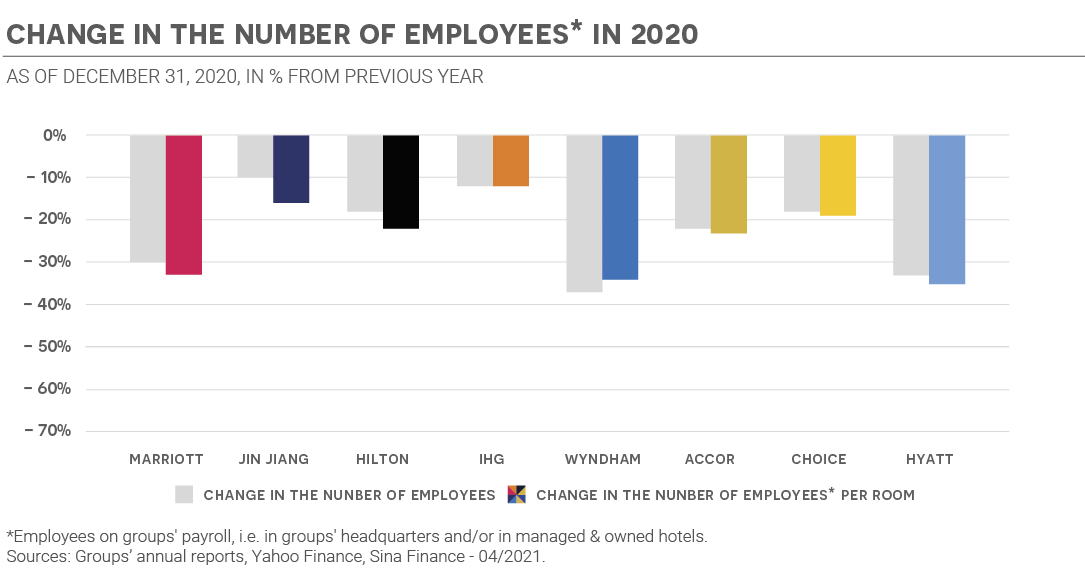 The crisis has therefore prompted hotel operators to make efforts to reduce the workforce at group level, i.e. at headquarters and in the hotels they own (very few today) or manage.

Among U.S. and European operators, the decline in headcount ranged from 10% to 37% depending on the group. As most of them have continued to expand their portfolios, this reduction is slightly more visible in terms of employees per room.

Overall, the staff-related savings achieved were therefore significant for all groups. They were particularly important at Marriott, Wyndham and Hyatt, while Jin Jiang and IHG decided to limit the headcount cuts at headquarters. Accor, Hilton & Choice Hotels have adopted a balanced strategy between these two approaches.

Given the context, the performance and strength of groups is also measured by their cash flows, cash available and "cash burn", a new indicator that has made its unpleasant appearance in the hotel industry. If the expression "cash is king" is true, some groups are ready for the future. This is the case for two groups in particular: Hilton and Accor, which stand out by particularly high levels of cash reserves.

In the case of Hilton, this is due to positive cash flows from financing activities. Indeed, in response to the health crisis, the group decided to extend the maturities and reduce the interest rates of its outstanding debt, thus strengthening its liquidity position.

For its part, Accor shows encouraging levels of available cash, generated in a different way: by divestment flows, with in particular the sale of real estate assets of the Polish group Orbis for 1.067 billion euros, followed by those of Mövenpick in March 2020. The French group retained this strategy at the beginning of 2021 through the sale of its shares in the Chinese company Huazhu, which brought to the group a solid net capital gain. Behind them but at a good distance, IHG also had a good level of cash at the end of 2020, due to the cash inflow from bond and commercial paper issuances under the Covid Corporate Financing Facility, a mechanism set up by the Bank of England to help companies in the context of the health crisis.

Hyatt, as well as Wyndham and Choice Hotels at a smaller scale, have also pursued this strategy of raising cash through financing deals. As pure franchisors, Wyndham and Choice currently have a much more limited cash position, but unlike some operators such as Accor or Hyatt, they have maintained positive cash flow from operations.

Finally, Huazhu and Marriott stand out for their particular strategies: the former drew on its reserves to close the Deutsche Hospitality buyout, while the latter maintained part of its initial dividend and share buyback program (in the first quarter), while recognizing as operating revenue $1.1 billion previously recorded as deferred from its Marriott Bonvoy loyalty program, and drawing $920 million in cash from agreements with the co-issuers of the credit cards associated with this loyalty program.

In terms of performance and profitability, the ranking must also be put into perspective. Of course, the COVID-19 epidemic has caused an economic upheaval. As a result 2019 EBITDA levels are more representative of the groups’ hierarchy than those of 2020, which are affected by the players’ business models (in particular the presence of owned, leased or managed hotels versus franchises) and by their different geographical exposures. In terms of financial valuation per room operated, four major players dominate the market with enterprise values standing between $30,000 and $40,000 per room: Hyatt, Hilton, Marriott and Huazhu. 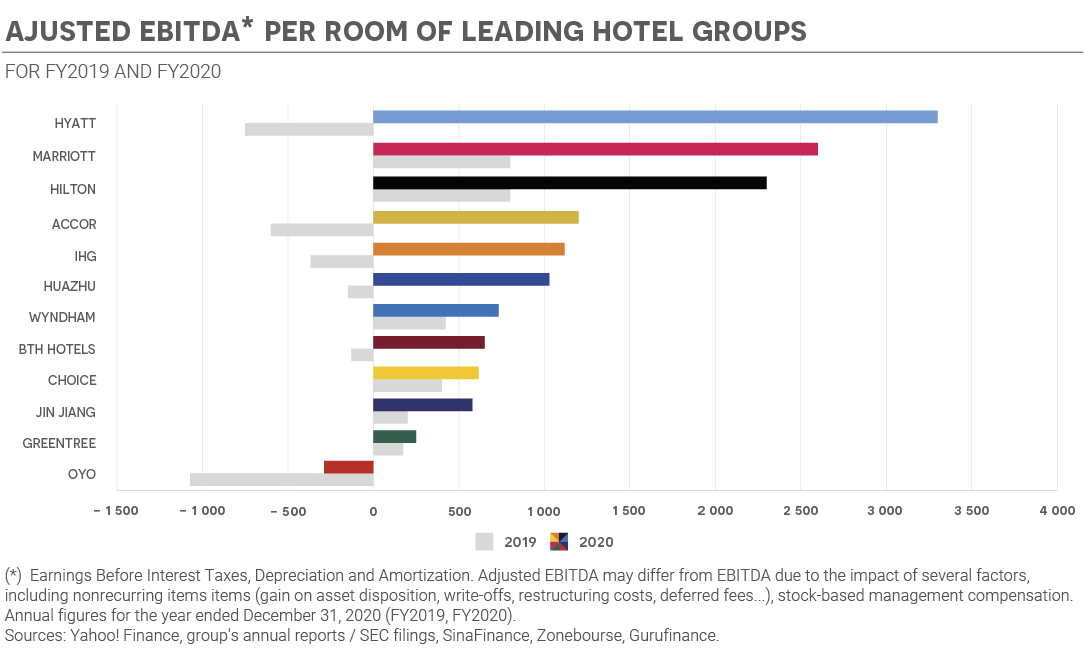 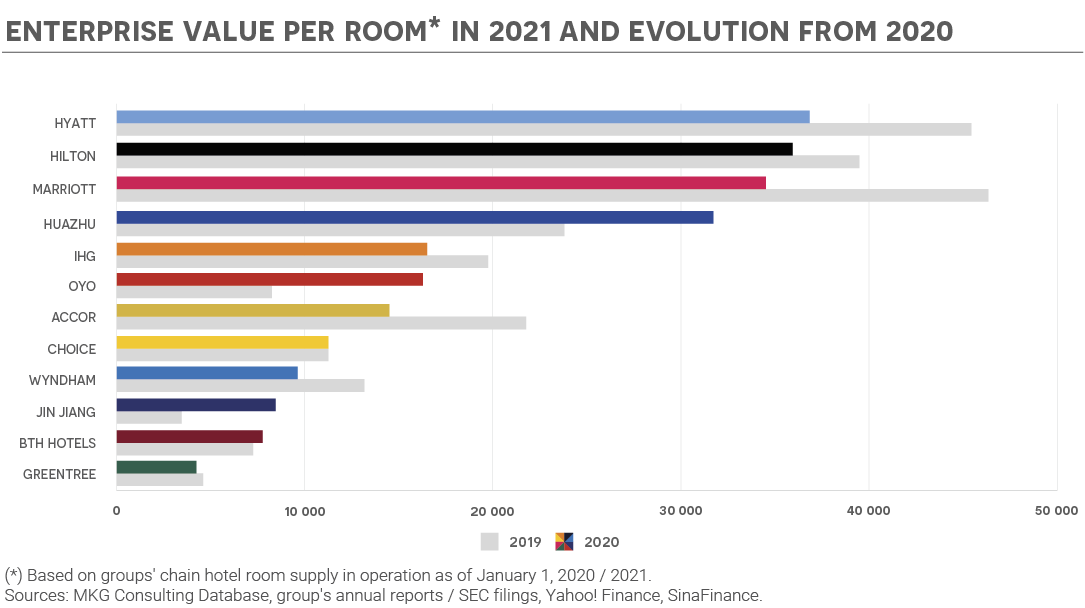 Whereas the American operators have lost value between 2019 and 2020, Huazhu has made a step forward thanks to its surge in the stock market. It should be noted that the group, although Chinese, is listed on the New York Stock Exchange, unlike Jin Jiang for example, no2 in the world and much larger than its rival in terms of rooms, but listed in Shanghai and Hong Kong.

Finally, OYO is not listed, but it raised funds in early 2021 (from Hindustan Ventures), valuing it at $9 billion. Like the other players in the sector, the group has therefore limited its decline in terms of post-pandemic valuation. However, in recent years it had achieved exponential growth at the cost of heavy financial losses: in 2020 it had to slow down the pace of its cash burn, and saw its supply shrink sharply.

However, let's take a step back and look at the broader picture: where does the value lie in the hospitality market? OTAs and digital players had already proved their weight in terms of valuation in recent years, and their stock market value bounced back quickly: in early 2021, Booking, for example, got back to the symbolic threshold of $100 billion valuation.

And the year 2020 was also marked by a major event: on December 10, 2020, Airbnb went public through an IPO. As it kept rising in early 2021, it also surpassed the $100 billion valuation threshold. The result is that today, the accommodation rental platform alone weighs more than Marriott and Hilton combined. And together, the major OTAs and peer-topeer platforms total more than $280 billion, compared to just over $200 billion for all Top10 hotel groups combined.

If the stock markets have already erased the losses of 2020, the hotel champions still have a lot on their plate: to reactivate their operations, to restore their income statements and their post-COVID finances, and also to prepare for the future and get closer to these new travel champions.