Based on early summer bookings, the French hotel industry was expecting to have an exceptional summer season. The stars did not all align though, but the heatwave, air travel disruptions, fires, water and staff shortages, inflation and fears about purchasing power did not prevent tourists from returning to France. This summer, the country not only posted record temperatures, but also record tourist indicators since the health crisis: with a RevPAR of €88 in July-August, France recorded an increase of more than 22% compared to before the crisis! Travel and holidays remain as popular as ever in our society. Here's a summary of this scorching summer.

On a national level, the performance of summer 2022 is clearly up when compared to last year (+14 points in occupancy and a 22% increase in average price), but they have also, most importantly, caught up with their pre-COVID level: a 22.2% RevPAR increase compared to the summer of 2019. While the increase in the average price has largely contributed to this dynamic, the overall level of occupancy has also almost returned to the 2019 level (-1.2 pts).

This recovery dynamic is now underway throughout France and for some destinations the health crisis seems to be a distant memory:

Evolution of the occupancy rate 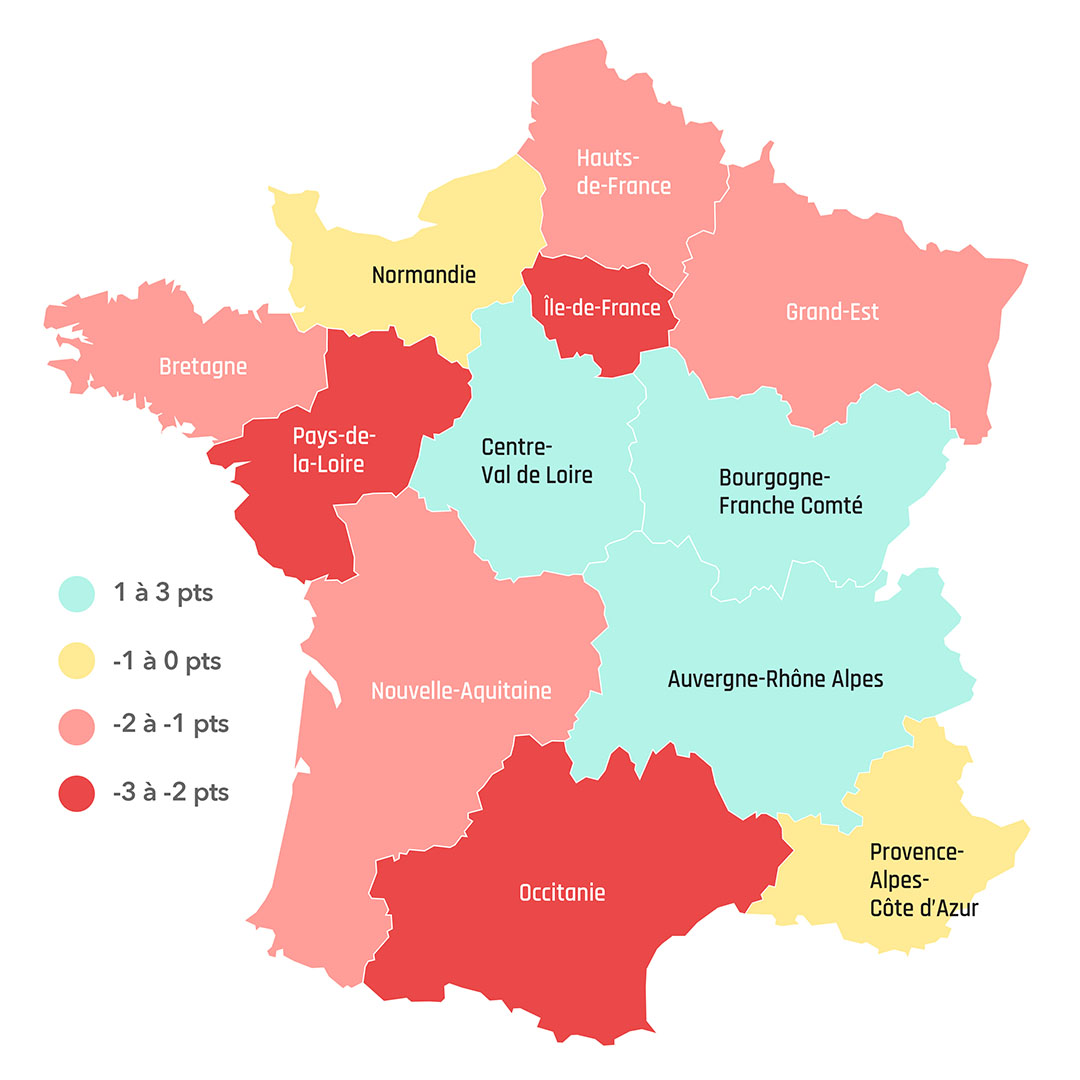 Evolution of the average price 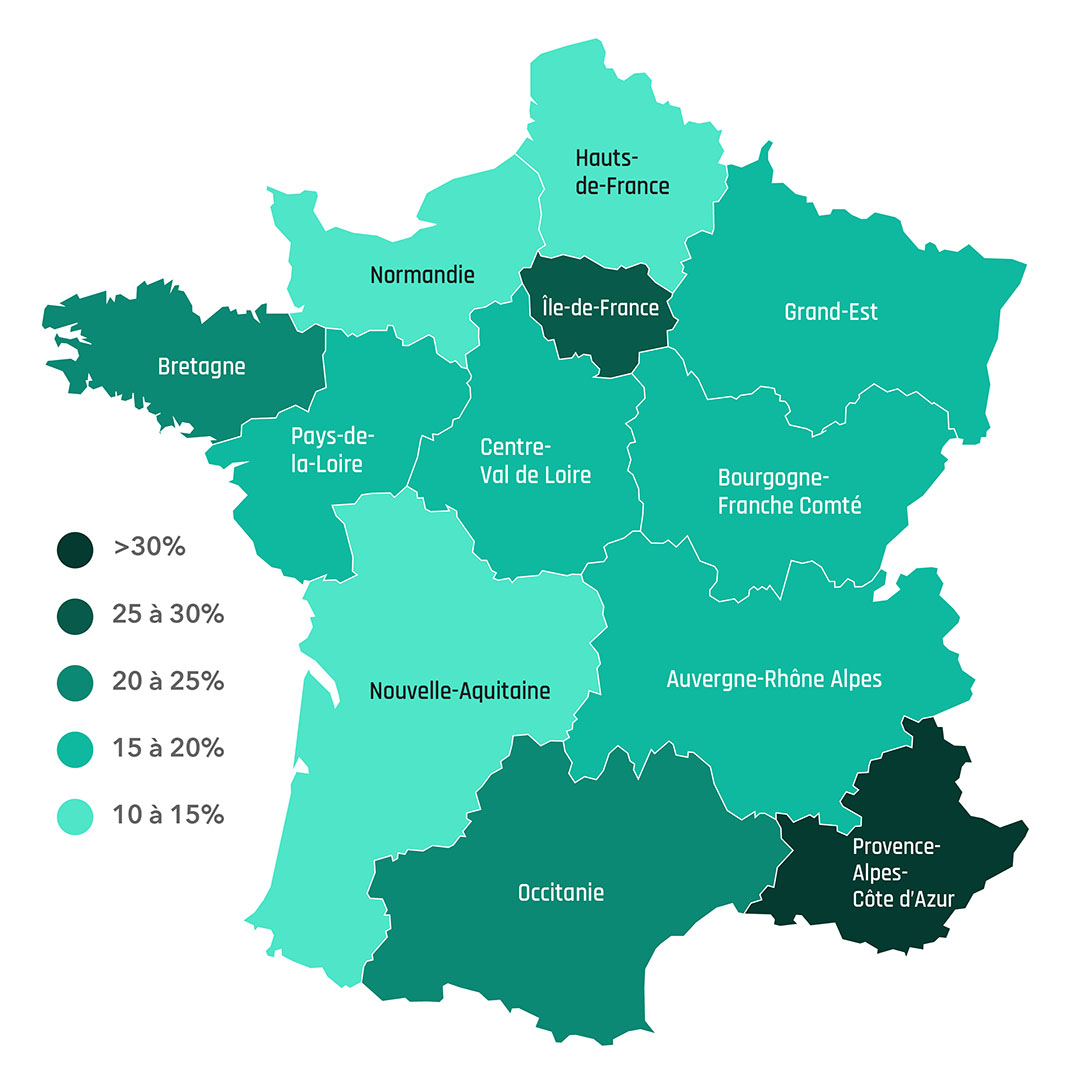 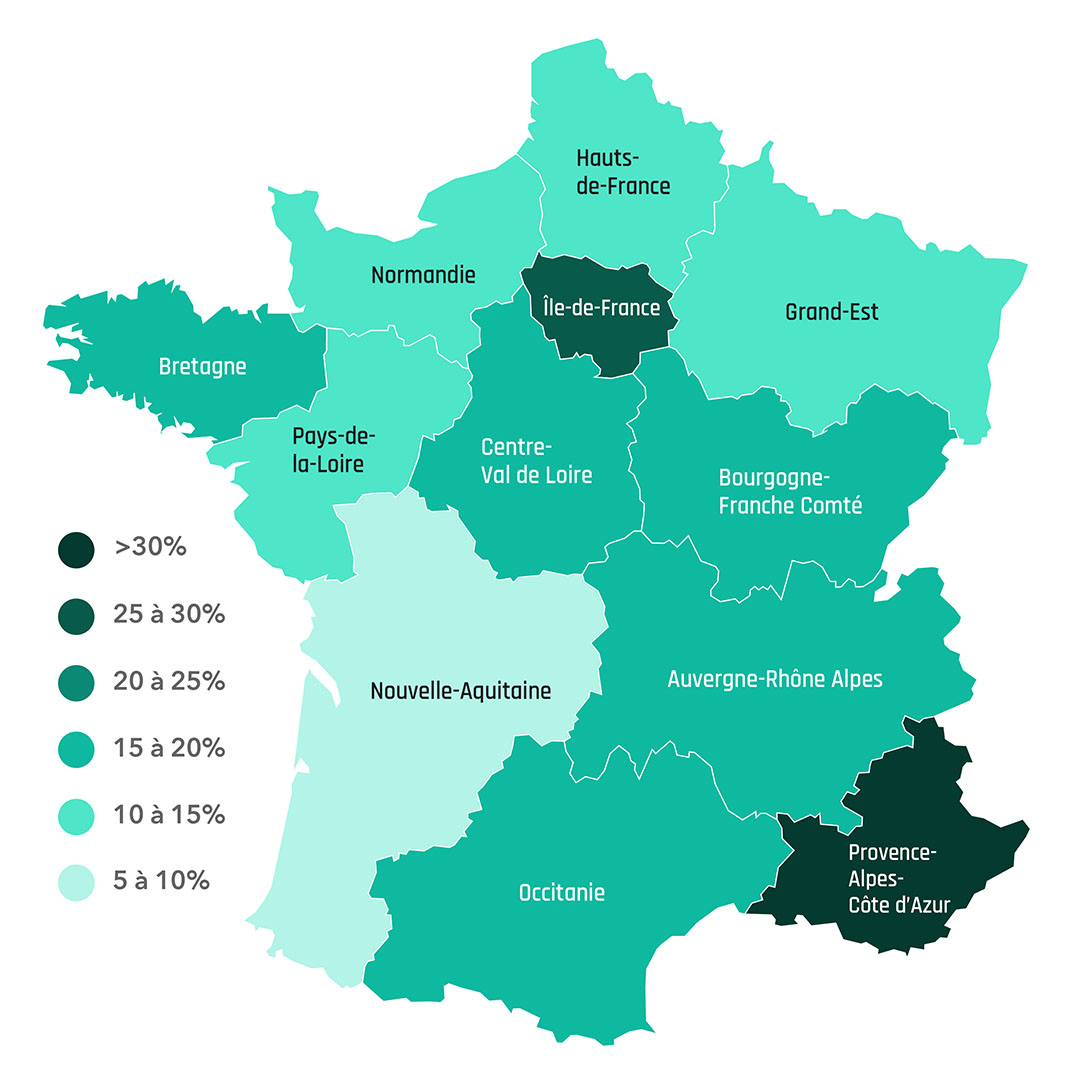 In the provinces, over the summer as a whole, occupancy has practically returned to normal, with a difference of only -0.7 points compared to the summer of 2019. The average price rose by 21.6%, and the area has seen an increase in RevPAR of 20.5% compared to the pre-COVID summer. 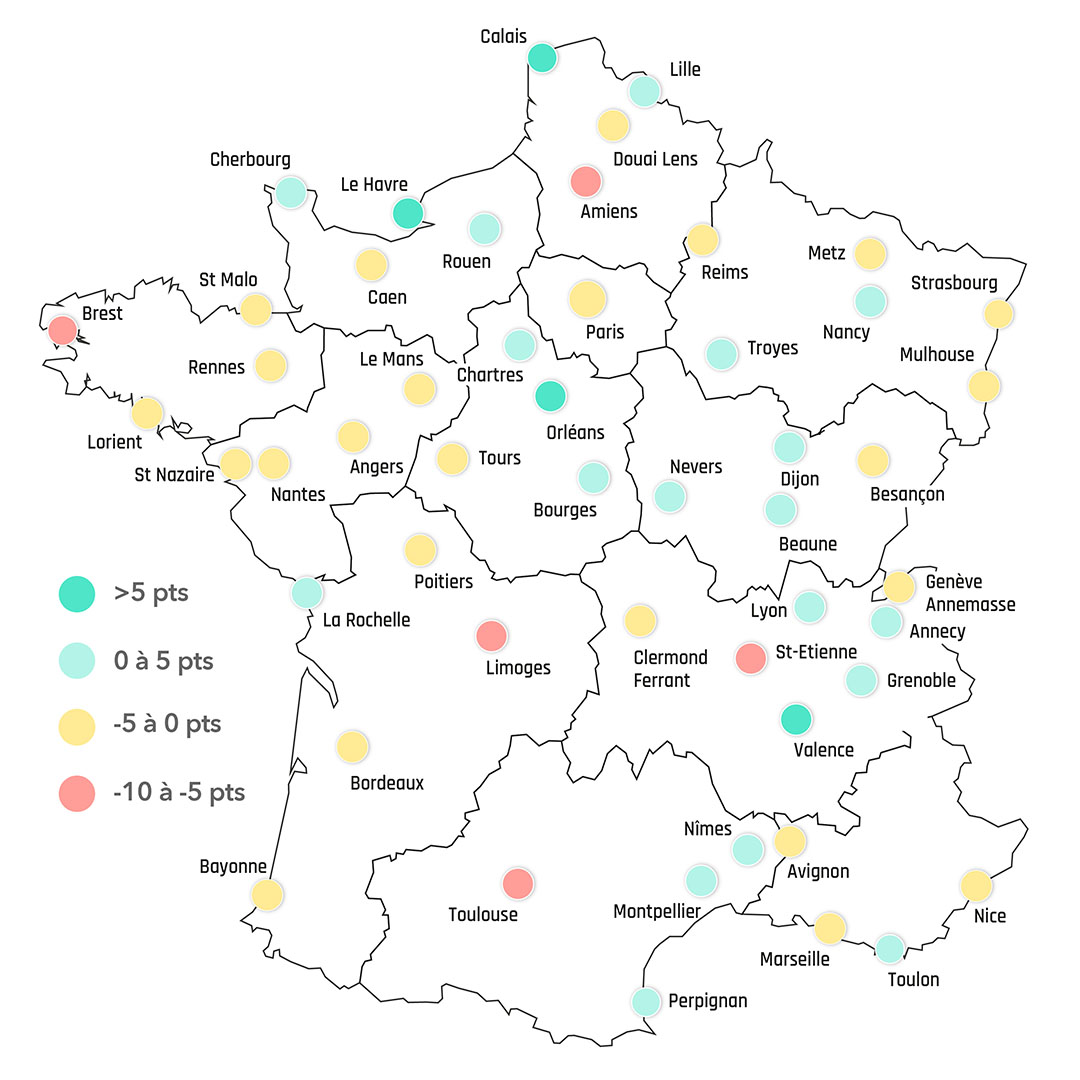 PARIS IS FINALLY GETTING BACK ON ITS FEET: LONG-DISTANCE CUSTOMERS ARE BACK

Evolution of attendance and prices vs. pre-COVID summer (2019): July, August and summer 2022

Evolution of the occupancy rate of French hotels by zone

Evolution of the average price of French hotels by zone 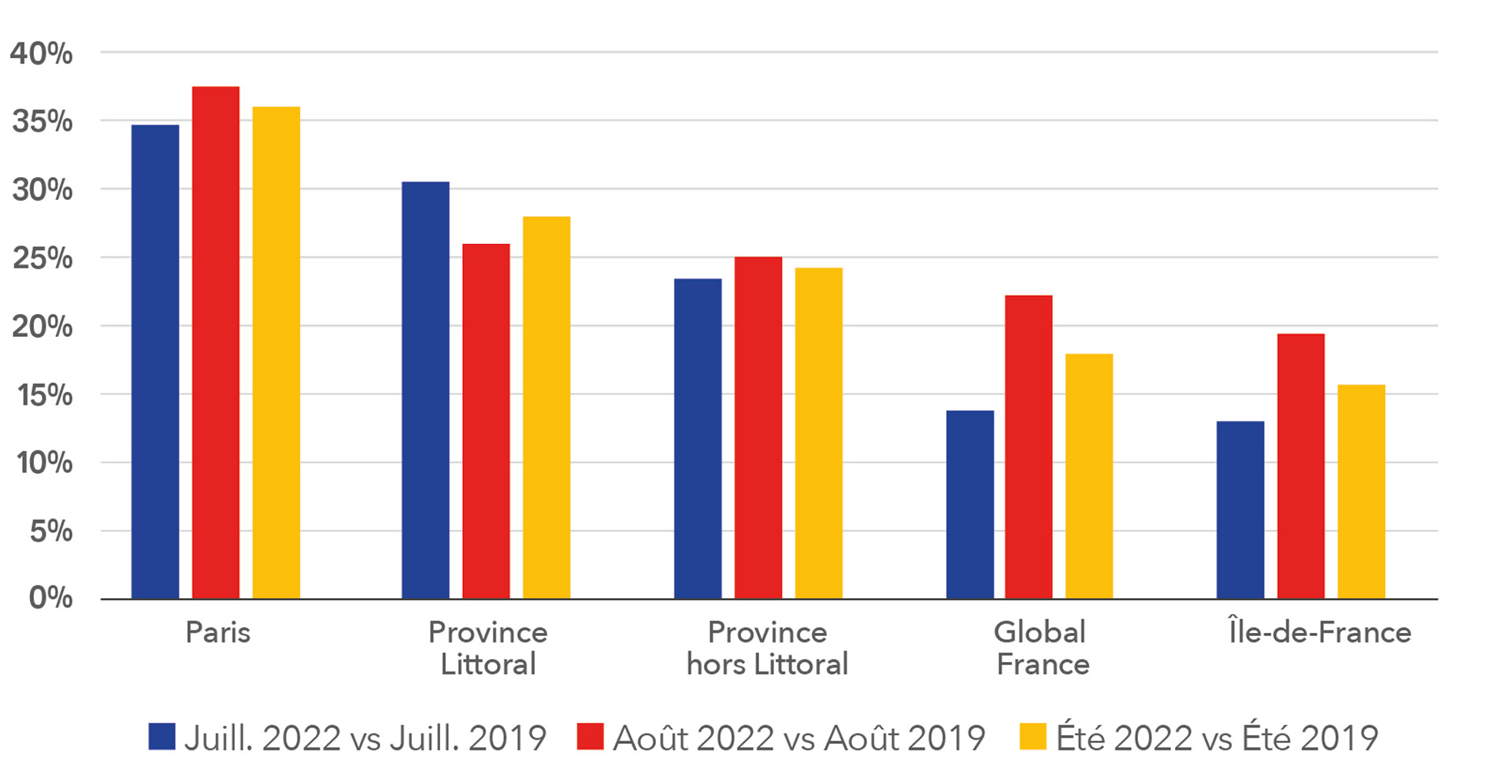 The upturn in hotel activity is also being driven upwards by the strong rebound in Paris, which until then had been recovering more slowly than the rest of the country. This reflects the return en masse of international and high-end customers.

Indeed, in July, Paris exceeded its pre-crisis occupancy (+0.3 points) and recorded a rise of almost 35% in its average prices, enabling it to record 35% growth in terms of RevPAR. And the momentum should continue with bookings in the second half of August almost doubling compared to last year in Ile-de-France.

Although it is less marked, the catching-up dynamic also concerns the rest of the Paris region and Ile-de-France hoteliers can finally smile at the end of the summer. The indicators have rarely been so good: only a 3-point difference in occupancy in August 2022 compared to August 2019 and an average price that is almost 20% higher.

In Paris and throughout France, this rebound is explained in particular by the return of foreign customers. European neighbours already made their return to France in 2021 but did so rather timidly. However, this summer the number of foreign visitors has increased. Even though the Russians are still missing this year (because of the war in Ukraine) as are the Chinese, other distant clienteles (notably the Americans) have returned in numbers to France. Thanks to the Euro/dollar parity, which is currently favourable to them, visitors from the US are making a strong comeback.

This return is reflected in excellent results for 5-star establishments, which posted a 40.6% increase in activity in July-August thanks to a near return to normal occupancy (only -1.2 points vs. 2019) and an average price that exploded (+42.9%). It should be noted that this is pushing up the average for all categories combined, whereas the 1* and 2* hotels, with a mainly domestic clientele, saw their prices increase by "only" 14.4% and 17.9% respectively, on a national scale.

It should be noted that the luxury revival does not only concern Paris. The Provence-Alpes-Côte d'Azur region, another traditional pull for long-haul customers during the summer, delivered the strongest increase in performance relative to the pre-COVID period in July. It recorded +1.1 points in occupancy and a 36.4% increase in average price, enabling RevPAR growth of 38.3%!

The life-saving return of tourists after the pandemic can also be explained by the excellent weather, particularly in July. This benefited the coastline: seaside destinations showed a slight increase in visitor numbers (+0.1 points compared to July 2019) and a 30.5% increase in average price.

Brittany, which had already achieved excellent results last year, more or less stabilised in July, while the attendance rate on the Atlantic coast and the Channel rose sharply in July. The Côte d'Azur even managed to exceed July 2019 attendance levels (+1 point). In August, the English Channel did well, with +2 points of attendance and increases in the towns of Le Havre and Calais in particular. Overall, Normandy had a very good summer with an 11.5-point increase in visitor numbers over the two months and a 14.9% increase in average price compared to last year.

Due to the strong heat waves, other destinations were able to do well this summer, confirming a trend observed as early as 2020. In August, it was the non-coastal destinations that posted a 0.7 point gain in visits (vs. 2019).

And if the French hotel industry in the southern half of France had already rebounded well last summer, this year it is the regions in the northern half of France that have shown the strongest growth. The Grand Est, Hauts-de-France and Bourgogne-Franche-Comté have benefited both from the return of international customers (large numbers of Belgian, Dutch and German customers for example in the north-east quarter) and from the desire of some French tourists to escape the immense heat or the wildfires of the south-west. This weather factor should not be neglected: it could well become a basic trend in the years to come.

GREAT PERFORMANCES THAT CARRY OVER INTO THE POST-SEASON

As the end of the summer approaches, the good results of the French hotel industry do not seem to be over thanks to a post-season that is already recording higher levels of reservations than last year. Of course, all this is subject to the possibility of a new health or geopolitical event disrupting everything and causing cancellations...

Apart from a few destinations that already had a very good "Indian summer" last year, overall the trend is favourable for the start of the new season. Bookings are clearly higher than last year, and the trend is even more marked in Ile-de-France (red curve).

Like all champions, French tourism was able to recover quickly from the effects of Covid-19, setting a new historical record this year. France confirmed its status as a desirable destination and consolidated its place as a world leader in tourism.

This summer has demonstrated the resilience of an industry in which France is one of the world champions. This confirms the potential of this sector in a context of economic uncertainty in the months to come and contributes favourably to France's trade balance. As for tourism professionals, they can finally take a good breath of fresh air after the difficulties of the last two years.