By MKG Consulting. After a difficult start to the year marked by stagnation in occupancy in January and February and a decline (-1.8 points) in March, the occupancy rate improved significantly in April (+2.8 points).

In the end, over the first six months of the year, the French hotel industry posted stable performances compared to the previous year. The occupancy rate increased, but by only 0.2 points due to an excellent month of June (+1.7 points). French hoteliers have suffered from the slowdown in activity that began in December 2018 with the yellow vest crisis. Only high-end hotels posted a drop in occupancy (-0.6 points). This segment was particularly affected by the decline in foreign tourist arrivals. (see Graph 1: Monthly change in occupancy in terms of percentage points since the beginning of the year).

While the occupancy rate remains stable, average daily rates rose 2.8% causing the RevPAR to grow by more than 3%. The strongest increase in RevPAR is posted by budget hotels with +4.1%.

YTD RESULTS OF INDEPENDENT AND CHAIN HOTELS IN FRANCE

EVOLUTION OF INDICATORS BY QUARTER SINCE JANUARY 2018

In the West of France the occupancy rate posted the strongest growth with increases by 1.8 points and 1.7 points in Normandy and Brittany respectively. The regions in the North and South post occupancy rates that are positively stable compared to last year. Regions in central France (Centre Val de Loire, Pays de la Loire, Ile-de-France and Bourgogne Franche-Comté), meanwhile, show a slight drop in their occupancy rates (cf Map 1: Change in occupancy rate in the first 6 months of the year by region). 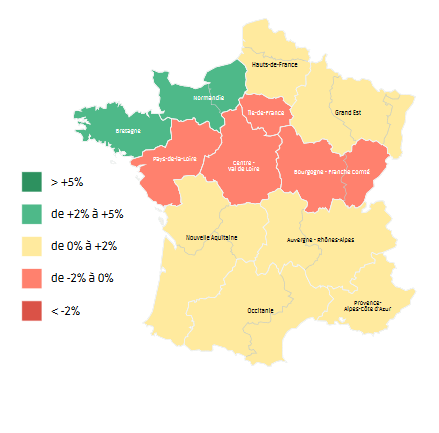 An excellent month of June thanks to international events

The international Paris Airshow at Le Bourget and the FiFA Women's World Cup allowed French hoteliers to post excellent results in June. These two events welcomed international clientele who had otherwise stayed away from the country since the beginning of the year, particularly American clientele who followed their women's football team across the pond. The month should also be good thanks to the semi-finals and the finale held in Lyon.

Although it is one of the biggest European markets, France is not in the lead. Countries such as Spain and Belgium post better results than France, particularly thanks to strong increases in average daily rates.

France: towards a relapse in 4Q GDP