The attractiveness of France as a destination persists, particularly among American groups. The market's stability and resilience, as well as its position as the world's leading tourist destination, make it a prime target for groups seeking development on the Old Continent. 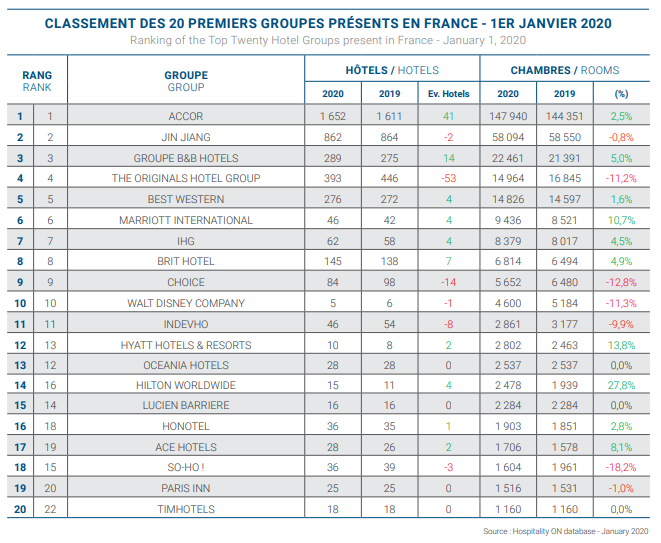 AMERICAN BANDS IN THE STARTING BLOCKS

Of the top 20 global groups present in France, the three largest increases in the portfolio are made by Americans.

Leading this growth is Hilton Worldwide, which in 2019 opened 3 properties in the Île de France region and another in Toulouse. 2020 will see an opening in Nice (120 rooms) and another in Paris near the Eiffel Tower (118 rooms). The birth of the Signia premium product and Tempo lifestyle brands will perhaps facilitate the arrival of new hoteliers within Hilton.

6th in the Top 20, Marriott International also posted a strong increase in the number of hotels for the second consecutive year (+9.5% in 2018, the largest increase, +10% in 2019). The group opened 1,192 keys in 2019, notably with 350 rooms for the Courtyard by Marriott Paris Porte de Versailles and the opening of the 2nd Moxy Paris Charles de Gaulle Airport, which adds 292 keys to the portfolio. 2020 will see the opening of two properties in the Mercuriales Towers, Moxy for 272 rooms and Sheraton for 570 keys, Paris being "[A] strategic destination to expand our European portfolio" according to Xavier Grange, Vice President of Development at Marriott International, France & Benelux.

First American in this ranking, Best Western is 5th with a +1.6% growth (+9.4% with WorldHotels). After an increase of +6.3% in 2018, the group has returned to sustainable growth, with +229 rooms (+1,144 through the acquisition of WorldHotels). Sure Collection also arrived in France in the Var (33 rooms). Olivier Cohn (CEO France) stated that "the launch of this new brand in France is in line with Best Western® Hotels & Resorts' diversification strategy and allows us to welcome new members wishing to join the group and benefit from its distribution while remaining independent. »

The French group still overwhelmingly dominates its domestic market with 147,940 keys. Its next 9 challengers combined do not manage to match its volume of rooms. The brands ibis megabrand and Mercure are also the leading chains.

The opening of the 2nd JO&JOE (185 keys), the first greet hotel (52 rooms), the first 25 Hours Gare du Nord (237 rooms) and the strong growth of the MGallery brand (+3 properties), illustrate the dynamism of the millennial, lifestyle and boutique oriented brands in the group's portfolio.

InterContinental Hotel Group launched voco in 2018 and reconverted the Holiday Inn Paris Gare Montparnasse, thus establishing the brand in France. The acquisition of Six Senses Resorts and Spas also enriches the portfolio of one property, with a new opening planned for 2022 in the Loire Valley (88 keys).

After growth of +7.2% in 2018, Brit Hotel continues to expand by opening 7 establishments, representing +4.9% growth in the offer. The offer of Oceania Hotels, another Breton group, remains unchanged for the second consecutive year.

As for Ace Hotels, the French group gained two properties for a total of 128 additional rooms, allowing it to climb from 19th to 17th place in the ranking.

The Originals Hotel Group may have had some difficulty in getting some of its properties into the repositioning dynamic. The network lost -11.2% of its supply, i.e. 1,881 keys.

Choice, the only American hotel in the turmoil, loses 14 properties (-12.8% of its portfolio) after a 6.3% increase in 2018. The Comfort Hotel brand is pulling down the portfolio, losing 609 keys and 12 properties.

Kempinski Hotels to settle in Mexico