The Indian start-up is beginning a new chapter with expansion in the land of the rising sun.

In April 2019, OYO Technology & Hospitality Company, Japan, the joint venture between OYO – South Asia’s largest, and the world’s fastest growing chain of hotels, homes and quality spaces – and Yahoo Japan Corporation (“Yahoo! JAPAN”) announced the launch of OYO LIFE services in the country. On April 4, OYO Hotels Japan G.K. was launched thanks to a joint venture with Tokyo-based SoftBank Corp. and SoftBank Vision Fund. The Indian startup has announced it has reached the benchmark of 100 properties in more than 50 different cities in the country including Tokyo, Osaka and Kyoto. The group plans to open 50 more properties by 2020, in cities such as Aomori, Asahikawa and Fuefuki.

According to an official statement, Japanese investment bank SoftBank, which has already invested around 1 billion dollars in OYO, is 50% owner in the new joint-venture. The new venture will be led by Prasun Choudhary as the operating partner and OYO founding member who has successfully launched a number of global OYO businesses. With OYO Hotels Japan, OYO aims to harness its innovative business model and technology led operational capabilities to offer convenient and comfortable accommodations to travelers and guests in Japan and create increased business opportunities for its partners.

In August, the group declared having multiplied its turnover by 3.8. The goal of the developing OYO on other markets aims to improve the group’s profitability. In reality, a major share of its revenues were reinjected in investment to support its international growth, thereby preventing the company from generating any profit for the time being.

We are very excited to launch hotel operations and extend our offering of good quality, beautifully designed, comfortable and ‘value-chic’ accommodations to domestic and international travellers in Japan. The 100+ hotel milestone, in a span of 6 months, is a big moment for us and further fuels our passion to continue to drive growth across the country while delivering quality customer service and empowering asset owners to run a sustainable business.

OYO Hotels Japan aims to empower small and independent asset owners in Japan with its rapid transformation capabilities and integrated hotel / ryokan management system powered by advanced AI technology, that will help owners improve both their efficiency and profitability. It is ready to offer the benefits of its full-scale technology-led hospitality model to hoteliers across the country.

With OYO Hotels & Homes, millions of customers have gained access to a large and growing supply of standardized and trusted accommodation offerings worldwide, at affordable and predictable prices. 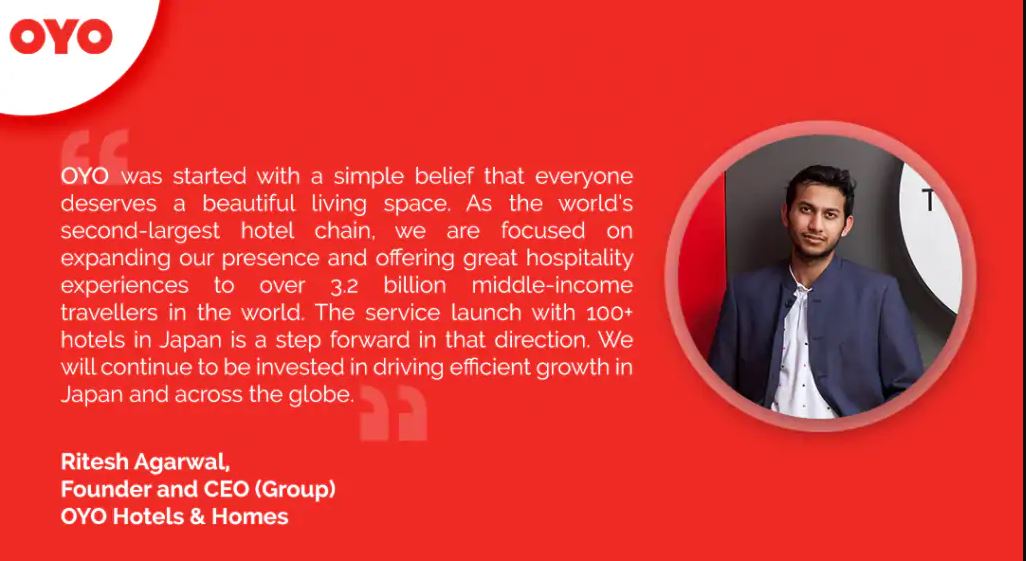 The group has strong international ambitions to surpass the leading hotel group worldwide, Marriott, by 2023. The Indian group currently claims 458,000 rooms in 8 countries, 8.7 times the figure reported in 2018, placing it in 8th place in the global ranking (Hospitality ON data as of January 1, 2019).