While mountain villages at lower altitudes experience the full effects of global warming, two resorts continue to attract tourists from all over the world thanks to their ski slopes covered by a white blanket of snow: Tignes and Val d’ Isère. These two villages are in the heart of the Killy area, one of the world’s largest ski areas. This study looks at 80 years in the history of skiing in the Tarentaise, how these two villages stand out from their alpine rivals and how they plan to remain unique in the eyes of tourists from all over the world.

According to the OECD, 39% of ski areas in the Alps are expected to no longer have enough natural snow cover to continue their winter activities at the end of the century. This means 80 ski resorts situated between 1,000 and 2,000 meters above sea level are threatened to close in the  decades to come. This is a major concern for mountain villages that depend on their winter tourist activities, but it could benefit - a contrario - Tignes and Val d’Isère. These two resorts alone share the 8th largest ski area in the world, Espace Killy, famous for its reliable snowmaking due to its high altitude (between 1,550 and 3,450 meters). It has 300 kilometers of ski slopes and is less affected by global warming than areas below 2,000 meters. Tignes and Val d’ Isère are also likely to benefit from even greater interest in the coming years, as tour operators are expected to focus their investments on high altitude villages in mountainous regions.

The Killy ski area is one of 9 other ski areas that are among the 15 largest in the world and located within a distance of less than 100 kilometers. Also located in the Tarentaise valley, a territory in the department of Savoie, is Les 3 Vallées which, with its 600 kilometers of ski slopes, is the largest domain in the world. It has already earned its reputation as it is made up of internationally renowned resorts such as Courchevel, Val Thorens and Méribel - which are strong competitors for Tignes and Val d’Isère.

Five other ski areas, located exclusively in the departments of Savoie and Haute-Savoie, are among those with the greatest number of kilometers of linked ski slopes. All offer day-rates between 47 € and 61 € (all-day prices for the entire domain, high season 2016/2017), varying mainly according to their size. The Savoie Mont-Blanc promotion agency was created to take advantage of the attractiveness of this region and to pool all the strengths of these areas with regard to  international competition. It highlights the identity of each city and village to create a sense of uniqueness for each of its territories. For potential tourists, each ski resort is different, so the idea of  renewing their experience at another ski resort in this region is gaining interest.

Other major foreign ski areas include the 4 Vallées and Matterhorn Ski Paradise in Switzerland, with the luxurious resorts of Verbier and Zermatt, which have higher ski pass prices than in France. Three domains located in the Austrian Alps offer a more varied and less luxurious range of tourist accommodations depending on the resort. Finally, Park City in Utah with its 250 kilometers of linked ski runs offers ski passes that are much more expensive than in Europe - full-day access to the entire ski area in the high season of winter 2016/2017 was 114 $ including taxes. Skiing in the United States is an activity that tends to be reserved for an affluent clientele.

Supply and development of resorts

Designed and produced between 1964 and 1977, the snow plan was designed to “determine a concept of highly functional alpine ski resorts, based on vertical urbanism, to initiate a unique partnership with local authorities and develop a new generation of high-performance resorts likely to bring in foreign currency.” More than 150,000 tourist beds were created between 1971 and 1975. These substantial investments have contributed to the construction of the French ski area and are one of the reasons why France has ranked first with the United States in terms of ski-days sold for several years. Among the ski resorts concerned by the snow plan, Tignes has a substantial offer of tourist residences - 1,273 units in 19 properties - representing half of its tourist accommodations offer as of January 1, 2017. The majority of the hotel supply is represented by the midscale segment (408 rooms), but it is shrinking and being replaced by the upscale hotel offer, which has grown between 2012 and 2017 and is now estimated at 252 rooms.

In Val d’Isère the tourist accommodations supply consists mainly of hotels, with the mid- and upscale segments dominating the hotel supply with more than 900 rooms. Tourism residences and holiday villages, have a less developed offer with 484 apartments and 382 bedrooms respectively.
Finally, it should be noted that each resort has a campsite that is only open in summer; the summer season is not an important period for tourism in
these mountain towns (as opposed to Chamonix Mont-Blanc in particular), so it is logical that its supply is not very developed. 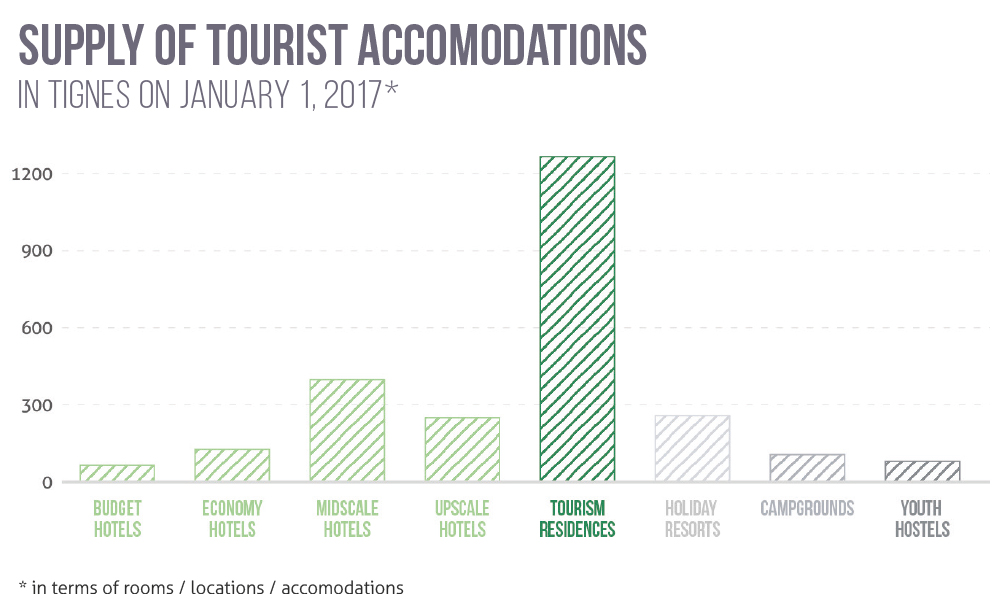 Tignes, the resort with year-round skiing

Located near the Grande Motte glacier, Tignes has been able to take advantage of this element to offer skiing even during the summer and thus develop the village’s tourist appeal during the summer months. The 20 kilometers of trails on the glacier are accessible with a package of 15€ per day. By promoting this rare asset and the reputation of the Killy area, Tignes leverages its sports identity to promote itself.

With major athletic events attracting experts from the sector andparticipating in the international promotion of the resort, Tignes has hosted numerous international competitions including: 3 freestyle skiing events during the 1992 Albertville Olympic Games; the X Games (extreme sports competitions) and the finals of the SFR Freestyle Tour. 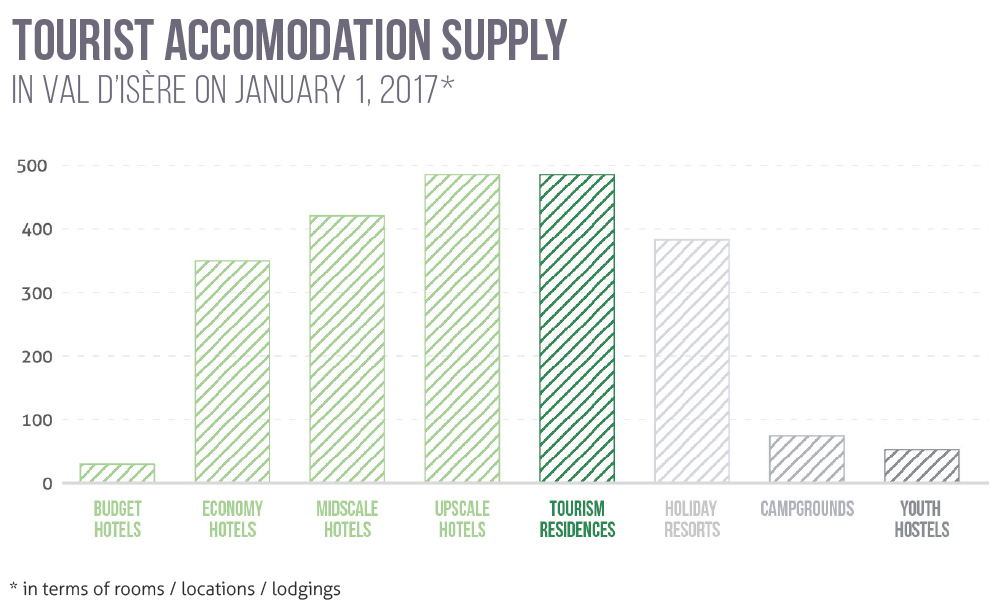 In order to diversify its clientele while continuing to play with its identity, a congress center at an altitude of 2,100 meters was opened in 2013. It is directly promoted together with the sports center, the will of the town hall of Tignes being to better meet the expectations of sportsmen and companies.

As it was not part of the snow plan of the 60s and 70s, Val d’ Isère still has the charm of its historic center and has developed hamlets. The resort also has a long tradition of welcoming tourists in winter: the first ski school in Val d’ Isère was founded in 1932. By highlighting its historical heritage, the resort promotes itself as an athletic and above all artistic destination. Among the major events: Classicaval brings classical music orchestras in winter; the International Adventure & Discovery Film Festival in Val d’Isère attracts thousands of spectators each year for screenings. There are also painting workshops in French and English and free guided tours that tell the village’s history to tourists. The two-star restaurant “L’ Atelier d’ Edmond” is part of the resort’s identity and invites tourists to taste its dishes flavored with Genépi in a chalet lit by petroleum lamps. The Samovar, a 5-star hotel also offering chalets for rent, is part of the upscale supply available in Val d’ Isère, where the offer is more substantial than Tignes.

The United Kingdom, leading source of foreign clientele in the Tarentaise The Tarentaise, a territory in the Savoie notably composed of the ski areas of the 3 Vallées, Paradiski and the Killy area, had more than 2,130,000 overnight stays in 2016. The French are the leading clientele with 1,116,800 overnight stays this year, or 52.3%. The United Kingdom accounts for the largest number of overnight stays from foreign countries with 461,600 or 21.6%, far ahead of Belgium with 118,200 or 5.5%. The Tarentaise’s dependence on British clientele could pose a revenue threat to resorts in this region over the next few years. Negotiations for the exit of the United Kingdom from the euro zone have had a negative impact on the exchange rate between the pound sterling and the euro, resulting in a near parity between the two currencies this summer. In addition lowered purchasing power for the United Kingdom this winter and in the coming winter seasons would have a significant impact on local players. Finally, there has been a strong presence of Russians with 77,200 overnight stays and tourists from the Near and Middle East with 44,700 overnight stays; the decisions of the respective governments and their geopolitical consequences will certainly have an impact on these customers’ arrivals and purchasing power in the Tarentaise.

Investments and future of resorts

Val d’Isère, plans to build a new district: the Coin de Val. Composed of : buildings integrated into the current landscape, it will be consistent with the historic architecture of the village. This will increase the supply of tourist accommodations with two 3- or 4-star hotels and two tourist residences. This 22,000 m² complex, with a planned investment of 200 million euros, will benefit from the village’s high altitude through a direct connection to the ski area. A spearhead of the summer attraction of Tignes, the Grande-Motte glacier is suffering from the vagaries of global warming and is losing its surface area, which threatens the summer season. In order to continue to benefit from this asset, an investment of more than 60 million euros is planned to create a trail open year round that will be covered with artificial snow. This construction would decrease the village’s seasonality and reaffirm Tignes for decades to come as the resort for both summer and winter skiing.

December 2021: A frosty month for the European hotel industry