The first trends observed for the summer season coming to a close at the end of the week show that national results are stable compared to last year. Indeed, occupancy fell 0.4 points over the two months of summer.

Moreover, occupancy increased slightly by 0.2 points in July, whilst it is estimated to decrease by 1 point in August . Unstable weather at the beginning of August probably influenced the decrease in occupancy. Properties in the provinces, thanks to good weather in the month of July, posted a slight increase in their occupancy rates. Paris and Ile-de-France region recorded a drop in occupancy compared to last year (-1.2 points for Paris, while the Ile-de-France region fell by -1.7 points).

The reduction in occupancy is evident in the 3* to 5* categories, while 1* and 2* categories show positive growth in their occupancy rates. This means international clientele were less present in comparison to the previous year. This is most likely due to the impact of the different yellow vest protests that have been in the news since the beginning of the year. In fact, March and April - months when there were many protests - are important months for summer bookings. On the other hand, the good health of the lower categories shows that customers are always looking for a quality product, but above all, at a competitive price. All hotel categories experienced even more competition this year from outdoor hotels as well as private and seasonal rentals.

Heterogeneous performances on the French Coastline

Brittany and the Atlantic Coast recorded excellent performances in July (an increase in occupancy by 3.8 points for Brittany and 2.6 points for the Atlantic coast) thanks to excellent weather, however, August was different facing a decrease of -2.6 points and -2.5 points respectively. Brittany's good results are even more remarkable given that the “Tour de France” did not go through the region, whereas last year several stages took place within Brittany. Concerning the region of Côte d’Azur / Languedoc, with regards to the summer season, occupancy has remained stable (+0.2 point) in comparison to the previous year. The month of August is less affected than other territories with occupancy down by only 0.8 points. 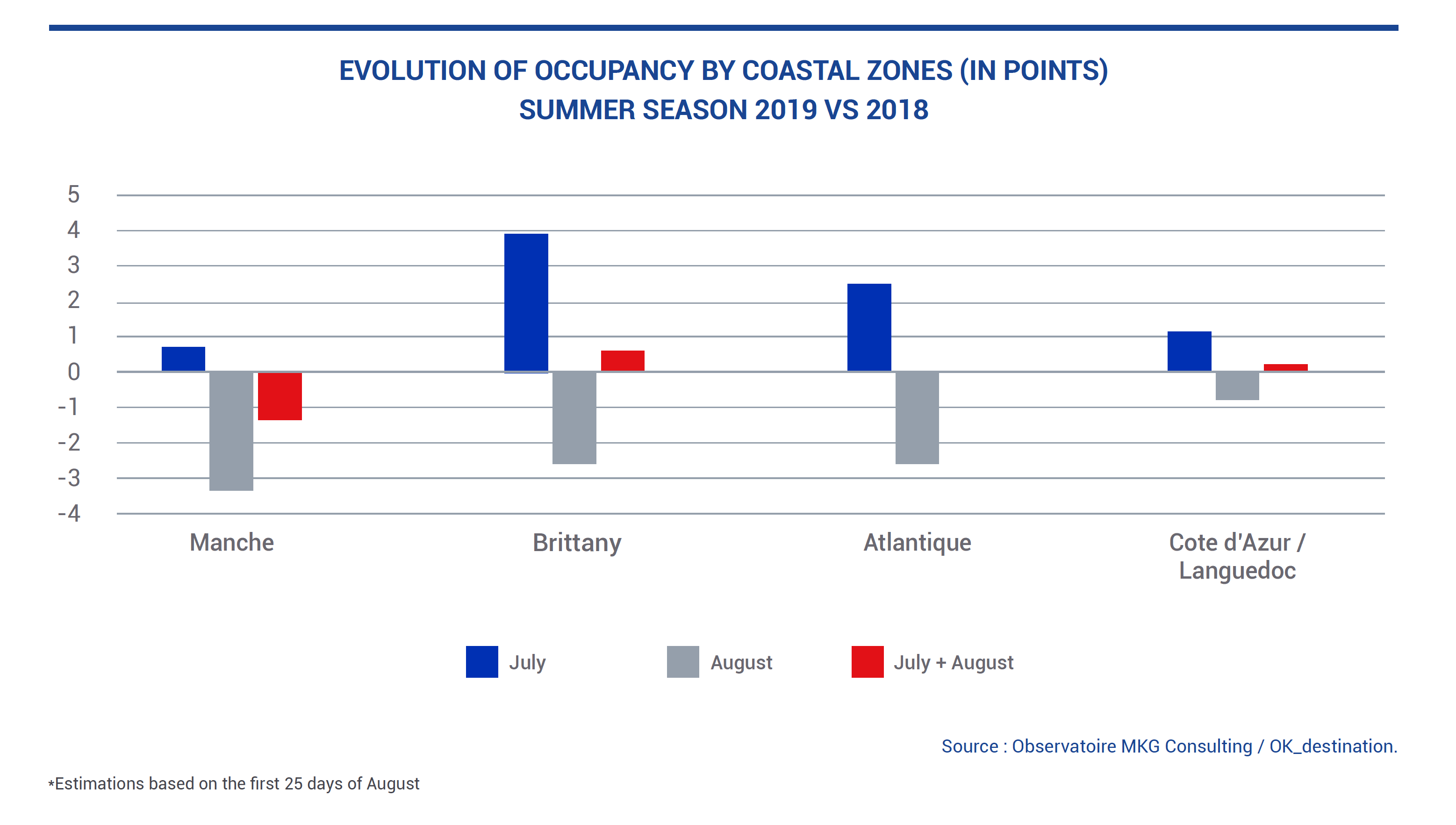 Significant reductions in average daily rate in August in Paris

At the national level, prices rose in July (+1.7% compared to July 2018). In August, a slight increase in prices could also be observed, but to a lesser degree (+0.7%). However, Parisian hoteliers sharply decreased their rates in August (-4.2%). Thus, making it the first-time prices had fallen in the capital in more than one and a half years.

The same slow trend observed with our European neighbors

With the exception of Spain that posted a +1.1 point increase in hotel occupancy over the summer period, all other European countries recorded stable or even declining performances, as did France. Coastal Spain remains a solid value for European tourism and attracts many tourists from all over Europe year after year.