Many tourists, visitors and professionals alike see the Paris Region destination through the prism of its flagship assets, which attract tens of millions of visitors every year, making it one of the most visited destinations in the world. There are also many professionals in the sector who, after investing to be present in places that generate a large number of customers, have become accustomed to exceeding their objectives and having to turn away customers. But what happens the day the crisis sets in and the sector loses control of its destiny for a while?

Many of them have been looking for solutions to adapt and maintain their activity, others are struggling to survive and will have to evolve quickly. Finally, all of them are wondering about their customers and the best way to convince them, satisfy them, and thus build their loyalty. How can we better irrigate this area, which can offer many proposals to a variety of targets? What kind of sustainable tourism in Île-de-France? How can we develop the resilience of the destination, which is particularly affected by the consequences of the COVID 19 crisis, since "only" 20 million visitors are expected in 2020, compared with the more than 50 million who visited the capital region in 2019? What is the place of a hotel, restaurant, leisure or convention site in this ecosystem?

PARIS ÎLE-DE-FRANCE, A DESTINATION THAT IS OUTPERFORMING BUT WITH AN UNEVEN DISTRIBUTION OF CUSTOMERS

With 50.3 million tourist arrivals in 2019, Paris Île-de-France has for many years been at the top of the international podiumof destinations in terms of the number of tourists received.

The attractiveness of the City of Light and its assets is undeniable for a clientele of first-time visitors, some of whom dream of visiting the Eiffel Tower or the Louvre Museum. However, this large volume of arrivals conceals a strong disparity in the impact on the area, with a major concentration of tourists and visitors on certain sites that are the driving force behind the destination.

Outside Paris, only Disneyland Paris Park, the driving force behind eastern Paris, and the Versailles Domain are comparable in terms of attractiveness compared to the emblematic Parisian sites. The other sites outside Paris remain below the threshold of one million visitors per year.

The region benefits from extremely strong heritage, cultural and intangible assets, which break many records for visits, sometimes leading to problems of over tourism and friction with the inhabitants. Numerous reflections are underway to improve the visitor experience in these saturated places. For example, the Louvre Museum has completely rethought its visitor reception area, inaugurated in 2016. The crisis linked to COVID-19 has made it possible to speed up the implementation of certain practices that accompany the regulation of visitor flows and the balancing of attendance over the day, while monitoring the gauges. Lane cutting tickets, time-stamped ticketing with predefined visit slots, virtual tours of certain areas, etc. It took a major crisis for these practices, already widely implemented in other destinations, to become widespread within the heritage and cultural sites of the destination.

The accessibility of certain sites is also an important issue for the destination which, although it benefits from the densest and most efficient public transport network in the world, still has areas with high potential for local tourism, which are only accessible by road.

The structure of the entire hotel portfolio varies significantly according to geographical location: the mid- and upscale segments represent 81.3% of the Parisian offer in terms of the number of keys, compared with 72.99% in Paris Region and 64.06% in Paris Region outside Paris, where the upscale offer is historically less developed. Conversely, the proportion of budget and economy keys is logically higher in the departments outside Paris: 35.94% of the supply compared with 18.87% in Paris and 27.01% throughout the region.

The French hotel market has been moving upmarket over the last twenty years. The independent budget and economy hotel sector is declining, particularly in rural areas, where demand is not always sufficient to ensure the takeover of properties whose managers are retiring. Difficulties in investing and bringing properties up to standard also contribute to this trend, which is not exclusive to the Île-de-France market, but with proportions that remain disparate.

As an illustration of this deceptive effect of the Île-de-France supply, the Marne la Vallée accommodation cluster, in and around Disneyland Paris Park, is bringing the department’s properties up-market, providing more upscale properties with greater accommodation capacity than the rest of the average for the Seine-et-Marne department. This offer weighs heavily in the Seine-et-Marne portfolio. Occupancy rates in the primary zone around the Disneyland Paris park reached 82.7% in 2019, compared with 75.4% for the department as a whole.

The downward trend in occupancy rates in Parisian hotels that began in 2015 (nearly 10 points of decline over the 2 years) was reversed in 2017 with a 6.4 point rebound in occupancy. 2018 saw a continuation of the generalised increase in occupancy begun in 2017, thanks notably to the return of international tourist clienteles but also to the country's better economic health. In 2019, the occupancy rate was maintained at pre-2015 levels, exceeding 76% throughout the region.

However, the trends vary from one region to another: while the Province grew only slightly (+0.2 points) in 2018, Paris returned to an occupancy rate of 81.3% after an increase of 2.5 points over the year. Île-de-France excluding Paris reached a record occupancy rate of 74.5% (+3.6 points). This trend is confirmed in 2019, with occupancy rates of 80.20% for Paris within the metropolitan area, 77.66% for Greater Paris and 76.08% in Paris Region. Île-de-France outside Paris reached 72.88% occupancy, with, however, extremely buoyant markets in terms of occupancy, such as the airport zones, which are pulling performance upwards, masking the average performance of certain areas.

The improvement of the Paris Region transport network, the gradual integration of soft mobility, the transformation of the hotel portfolio (which is tending to shift towards the inner suburbs, to the detriment of the outer suburbs), the revitalisation of certain towns on the outskirts of Paris and the development of airport hubs are making the Paris Region more attractive, in a context where the hotels in the inner suburbs were once again very full.

The year 2020 has placed Île-de-France tourism professionals in a context that is far from familiar to the majority of them. They were more numerous to close than their colleagues in the other provinces, and for a longer period of time, faced with the absence of summer customers in the Capital, the French having left to go green after several weeks of lockdown. Contrary to the structural trends of the Île-de- France hotel market, it is the inner suburbs which has fared best, attracting a local clientele on short stays. As at September 2020, hotel properties had 46.6 points of occupancy in the region, -54.1 points in Paris compared with -40.9 points for the region outside Paris. 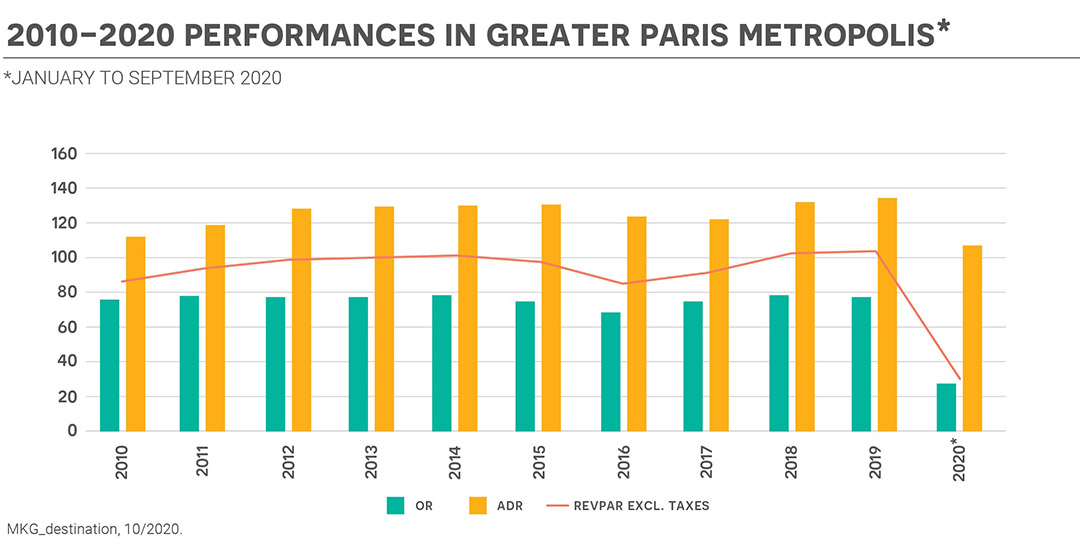