Over the last few decades, European metropolises have changed their face. Turning their activities towards services and especially tourism, whether business or leisure. Let's take a look back at the opportunities, ambitions and decisions that have led to these profound changes. This analysis will be completed by metropolises' point of view on themselves on their territories' development. Accessibility, urban development, structuring projects, development of the cultural offer... many factors have enriched the landscape of these destinations, attracting new customers to boost the hotel market.

The destination offer is the most stable of the 5 destinations studied, with 6% growth in the number of channels between 2007 and 2020. The upscale segment grew the most, with 19% growth, representing 949 rooms created.

The country's entry into the European Union in 2004 has had a beneficial effect on Budapest's hotel performance, which is progressing steadily. In particular, the occupancy rate rose from 67.2% in 2007 to 77.5% in 2019. This pivotal year also meant an increase in average prices, placing the destination on the European map and enabling it to gradually seek performance more in line with its European neighbors.

The Income per Available Room (RevPAR) is constantly increasing since the early 2000s, rising from € 31.07 including tax in 2000 to € 53.57 including tax in 2019 (attention the data are transmitted all taxes included, the increase in VAT in 2014 is not to be neglected in the evolution of prices for the consumer).

2008 was the year in which the evolution of average prices exceeded that of occupancy rates, thereby driving up RevPAR.

The super-economy segment reached the best fillings, approaching or even exceeding 80% in 2002 for a RevPAR of €20.31 including VAT. With the development of the offer, performance has dropped but remained at 69.2% occupancy in 2019 and RevPAR at €32.13 including VAT.

The year of the European Capital of Culture boosted the performance of the budget hotel industry, which in 2004 had an occupancy rate of 69.2% for a RevPAR of €39.45 including taxes. Fifteen years later, RevPAR reached €49.91 including tax for an occupancy rate of 64.7% in 2019. The increase in VAT will come into play in 2014, but also a restructuring of the entry- level offer and the development of the corporate clientele on which metropolitan France is focusing with the hosting of major international events.

London's hotel business is driven by its strong economic dynamics, mainly linked to its role as a global financial center, a status shaken by Brexit and its consequences that have led some global companies to leave the capital to join the Euro zone.

The Marseille market is also attractive for new concepts and new brands. Accor, for example, set up one of its first Greet establishments there with 60 rooms, available since June 2020, Grape Hospitality has just opened The People Hostel Marseille and Meininger will open 194 rooms in 2021. In the more upscale segments, the NH Group inaugurated an NH Collection and a 150-room NH property in 2018.

The development of The mid- and highend offer development is one of the factors in this overall increase in RevPAR but the average prices of the super economy and economy hotels have also been rising steadily throughout the period, from €27.57 including tax in 2000 for the entry-level offer to €55.66 including tax in 2019. In the economy segment, the AR varies from 46.48€ (including tax) in 2000 to 75.90€ (including tax) in 2019. The destination transformation and the quality improvement of its accommodations are a real improvement performance factor for hoteliers.

The trial was therefore transformed for the Cité phocéenne, which, like many seaside destinations, also showed strong resilience in the summer 2020. 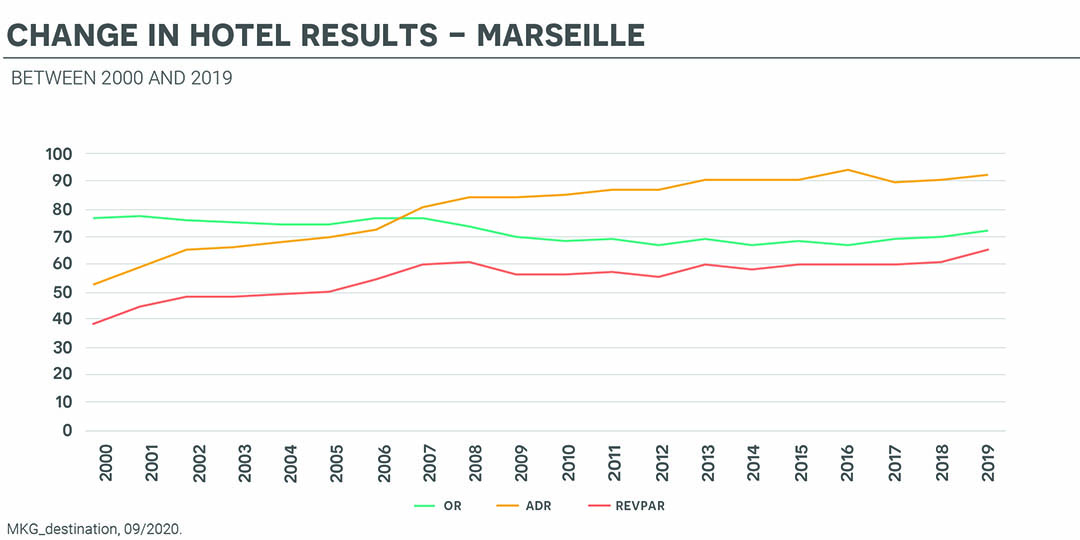 FOCUS - INITIATIVES TO ADDRESS THE CRISIS

The Lille metropolis has taken the lead with an offensive Clean & Safe destination strategy. The Metropolis and its attraction agency Hello Lille have given their partners in tourism and events access to a common base to harmonize the conditions of reception in the destination. to a common base to coordinate the conditions of reception in Lille. Realized with the Pasteur Institute of Lille, the charter contains 10 commitments to allow an optimal reception according to the respect of 10 rules. Public and private partners have worked hand in hand to implement and adopt this charter to reassure customers.

Another initiative to encourage people to stay in the metropolis is "L'été dans les étoiles" operation launched by 40 starred hotels in Lille, which offered preferential rates from July 1 to August 31 to residents of the Hauts-de-France region.

The joint efforts will have made it possible to maintain minimal activity although the destination did not benefit from seaside clienteles such as Marseille or Bordeaux this summer.

While in January 2020, occupancy rates averaged 60.5% for an average price of €78.4, these indicators dropped to 36.4% and €60.2 in August 2020, for the metropolis. The situation improved from mid-August thanks to the continued presence of leisure customers, the reopening of the entire hotel complex and the presence of students staying in hotels and residences while looking for accommodation.

The start of the year, usually a slow period for the destination, marked time with a slight decline in occupancy rates: -0.5 points and an average price drop of 4.4% for a RevPAR of €46 excluding VAT, a drop of -5.3% for hotels compared to January 2019.

The occupancy rate was satisfactory in the second half of August for the city of Marseille, at 76.4%. It was higher than in other leading destinations in the region, including Aix-en- Provence (55%) and Nice (58%). The first half of August was even more positive with occupancy rates reaching 90%, a 4-point increase over the same period in 2019.

The market resilience was also reflected in the occupancy rate change: -11.9 points compared to the previous year, comparable to Aix-en-Provence (-12 points) but much more moderate than in Nice (-30 points). The decline was accentuated from August 24, the date when restaurants and bars had to close, in addition to the mandatory wearing of masks in the city.