What results is the destination producing? What is the demand? What is the supply? What changes are expected? Part One: A stable market for an increasing revenue per room.

At the gateway to the Bavarian Alps, Munich is Germany's third largest city with 1.6 million inhabitants in 2019, and more than 2.3 million including its urban area. Located in southern Bavaria, the city enjoys a privileged location, being close to the Austrian, Swiss and Czech borders.

It is the richest city of the country and its prosperity is partly due to the many companies that have established their headquarters there, especially after the Second World War, when many companies left Berlin or East Germany to settle in the Bavarian capital.

Munich's economy is therefore very much focused on industrial activity, especially the automotive and aerospace industries. It is also known for its activities in the fields of scientific research, biotechnology and finance, as the country's second largest financial centre after Frankfurt.

Being a major business centre, the city is also a popular destination for luxury shopping and the traditional gateway to Bavaria and its castles. Tourism is therefore a key sector of Munich's economy, not least through its famous Oktoberfest beer festival, which takes place from late September to early October and attracts around six million visitors every year.

The destination hosts as much for its annual festival as for its cultural (museums, castles, ...), sporting (winter sports in the Alps, nature sports in the hinterland, etc.) and corporate headquarters which attract many business travellers each year. Its high-quality reception infrastructure ensures optimal conditions for the organisation of international events.

Indeed, the city welcomed 93,444 participants in international congresses and meetings in 2018, placing it 4th in the world in the annual ICCA city ranking. In terms of the number of events, the city is nevertheless ranked 35th in the ranking, with a total of 67 international meetings, including two major events that received approximately 30,000 participants.

A decline of -0.2% in earnings was recorded in 2016, largely due to the attack that occurred on 22 July 2016 in a shopping mall in the suburbs of Munich. This shooting, which left around ten people dead and sixteen wounded, affected the destination, as did similar events in Paris and Brussels. As a result, overnight stays fell to 14.02 million in 2016. However, tourism picked up again the following year: +8.9% more overnight stays in 2017.

One of the reasons why demand was only slightly impacted by the 2016 event is to be linked to the market sources. Indeed, tourists are primarily nationals.

The other markets are mainly European (UK, Italy, Switzerland, Austria, Spain) or relatively close to Europe (Gulf countries, Russia), with the exception of China, which is in the top 10, and individually represents between 2 and 3% of total overnight stays.

Munich is therefore a destination that is primarily geared towards the German-speaking region, whether for German, Austrian or Swiss markets. With a certain international recognition but still relatively limited influence, the destination relies above all on domestic demand which ensures a certain stability in its performance, as it is less sensitive to major events, as foreign markets can be.

Stable performance for a mature market

Overall, the Munich market has shown relatively stable results over the last seven years. Over the period 2012-2019, occupancy varied slightly. Only the average daily rate increased, mainly due to natural economic inflation, resulting in a slight increase in income per available room over the seven-year period.

As proof of a destination that is both mature and successful, three-quarters of the hotel rooms in the Munich conurbation were occupied in 2018, representing an average annual occupancy rate (OR) of 77.28%. This indicator is on the rise, with a net gain of +0.66 points compared to 2017. However, the first three quarters of 2019 showed a decline in performance, with the occupancy rate down 0.25 points compared with the same period in 2018. Also, the period from 2012 to 2019 was particularly marked by a decline in hotel activity in 2016, following the July 2016 attack.

By way of comparison, the occupancy rate in Brussels lost -10.9 points in the year of the attacks, to regain +9.8 the following year. The variation is therefore very significant, with as many cycles of strong growth as cycles of strong decline. Munich, on the other hand, reveals a rather steady market, fuelled by solid demand that is only slightly sensitive to events. 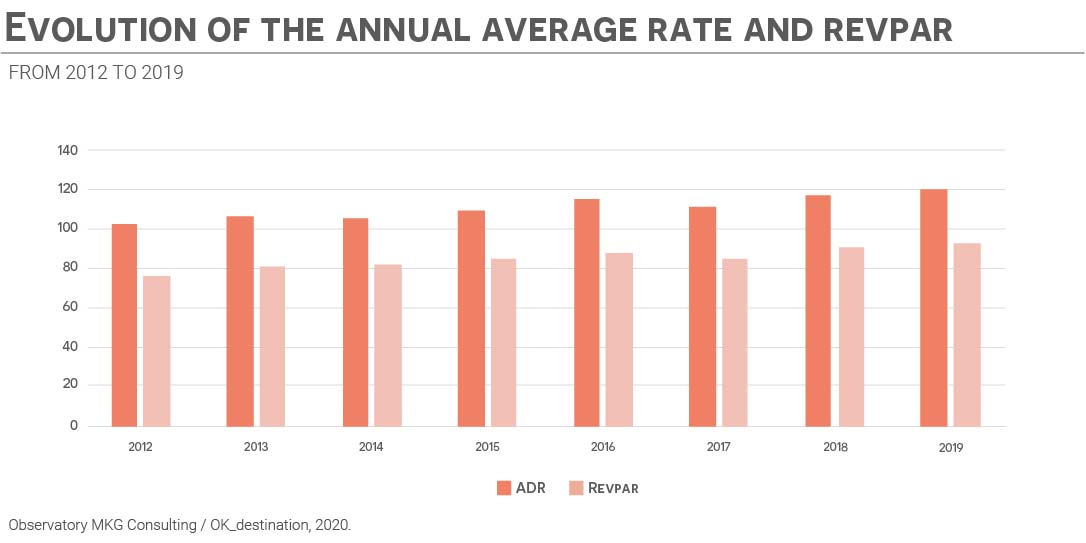 Seasonality marked only by rates

Munich is a market with demand that is both stable from one year to the next and throughout the year. Indeed, the intra-annual variation in hotel occupancy is only very small. Some periods of the year show slightly better results than others, but overall, occupancy varies only slightly each month compared to the annual average.

Only the average rate indicates a certain "seasonality" of the destination. Hoteliers tend to drive rates up in April, when seminar and event activity is particularly intense (bauma in April 2013, 2016 and 2019 - the world's largest construction trade fair held every three years, see the "Business tourism" section for more details) and in September and October, the Oktoberfest period. 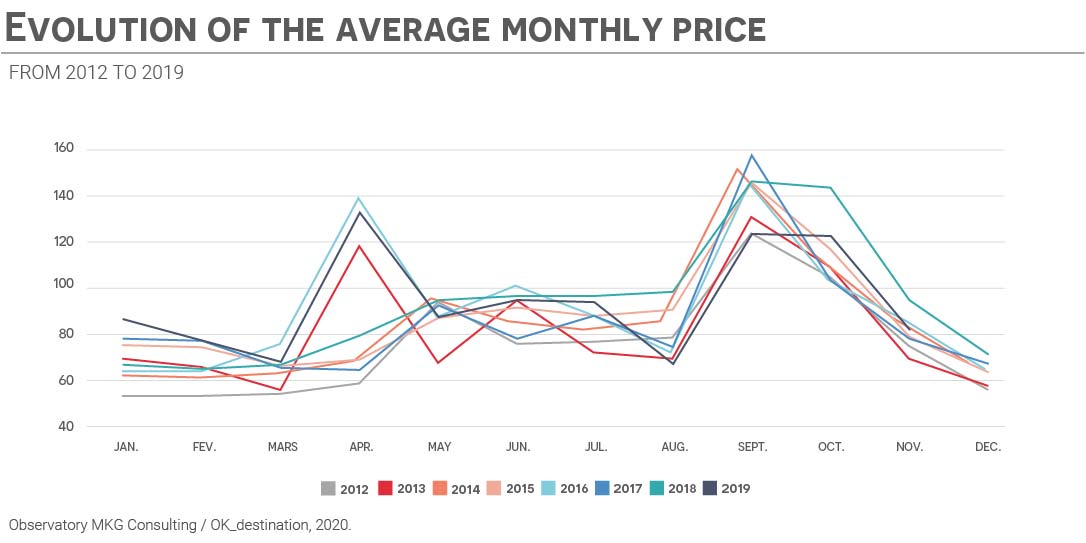