The failure of 2011 is far behind. On April 2 and 3, RyanAir opened its first two bases in France one after the other: in Marseille, again, and in Bordeaux. A third will open in Toulouse in September 2019 and the Irish airline has announced that other French airports (Lyon, Nantes and Beauvais) are in the sights. The result is new connections and the possibility of winning back market share in the tricolour sky.... Over the past 10 years, RyanAir, EasyJet, Transavia and the other low-cost airlines have considerably increased their presence in French provincial airports, becoming the majority in some of them. For provincial conurbations, this development of low-cost airlines has made it possible to grow and market the destination on a European scale for short stays in the form of city breaks. So, after 10 years, what change has taken place in the hotel supply? How has performance evolved?

The development of low-cost, growth engine for airports in the provinces from 2008

It is nonetheless possible to identify 2 groups depending on the degree of importance of low-cost in the growth in the volume of travelers:

In Marseille and Bordeaux, international travelers increased with low-cost

Between 2009 and 2018, the number of international passengers increased from 1 million to 3.8 million passengers or 56.2% of the total number of passengers. The low-cost offer made it possible to create a new demand from international clientele who would not be there without these new routes. According to Olivier Occelli, president of the Office de Tourisme de Bordeaux, who was contacted regarding this subject, this European opening made possible by low-cost flights was clearly visible through the volume of international visitors at tourist information centers and museums. According to him, the development of low-cost flights should be compared with the appearance of a new mode of tourism consumption: the "short city-break", 2 to 3 night, usually over a weekend, to an urban destination. This new position for the capital of the Gironde was highlighted in 2015 by the title of "Best European Destination" - ahead of  Lisbon, Athens and La Valette. Marketing of a destination is is first and foremost about marketing the offer and the tourism businesses and associations encourage the development   of low-cost travel.

The same is true in Marseille, although the city has the lowest shares of low cost. Terminal 2, reserved for low-cost airlines, was created in 2006. Regarding the new RyanAir base, François de Canson, President of the CRT Provence-Alpes-Côte d'Azur, said that it was "the starting point for new tourism development for the region: with Manchester and almost all the Central European countries directly connected to Provence, this new offer will boost tourism from countries in Central and Eastern Europe."

How does this effect the hotel industry: Bordeaux

Are hoteliers taking advantage of this increase in domestic and international passengers driven by the development of low-cost flights? Which hotel segments have expanded their offer? Which performed best? And finally, have ultra-urban accommodation concepts such as AirBnB, apartment-hotel type residences and youth hostels managed to capture this new demand?

Echoing the current situation, we decided to study the city of Bordeaux while keeping in mind that the market has been influenced by these local factors starting with the new high speed train to Bordeaux that was completed in July 2017. The observed trends offer more clues than conclusions.

An increase in the hotel supply observed in Bordeaux

The tourist rental offers via Airbnb and youth hostels have undoubtedly created new competition for hotels in the economy and budget segment, which may explain the structural changes in Bordeaux's hotel industry between 2013 and 2018.

Between 2014 and 2017, average daily rates and occupancy rate increased in a coordinated manner, allowing for a nearly 20% increase for RevPar. Such increases should be analysed in the context of an upscaling of Bordeaux's hotel sector, which has undeniably driven average daily rates upwards. That being said, the increase in occupancy rates reflects an intensification of activity.

Performance in Bordeaux across 10 years 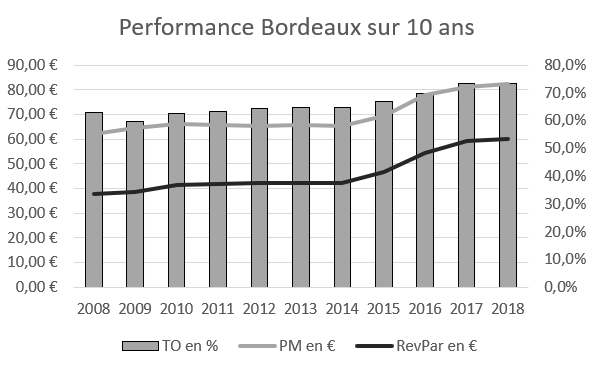 What are the results?
The development of low-cost has made it possible to place certain provincial cities among the major "city-break" destinations throughout Europe. This new demand from leisure clientele has allowed Bordeaux's hotel market to climb in terms of results. Nonetheless, alternatives available via Airbnb have also captured a share of this new demand. This competition has also led to structural changes with improved services that are better adapted to leisure clientele.

International tourism to make a comeback in 2022