Until now, the Mediterranean coast has been welcoming many tourists who want to forget their daily routine on sunny beaches for a few weeks of well-deserved rest. What sustainability for the resort tourism model, based for some destinations on a large share of foreign customers? At a time when the borders between European countries are barely opening up, when their inhabitants are still groggy from several weeks of lockdown and when the threat of the pandemic has not yet been totally ruled out, what about the economic health of these destinations and countries largely irrigated by tourism?

According to the World Tourism Organization, Southern and Mediterranean Europe accounts for 20% of the 51% share of international tourism markets that the European continent represents. It receives 14.9% of the world's tourism receipts for 38.8% in Europe as a whole. A destination which therefore derives a substantial part of its economic activity from tourism. Between 2017 and 2018, these data represented + 5% of tourist arrivals and +7% of receipts. 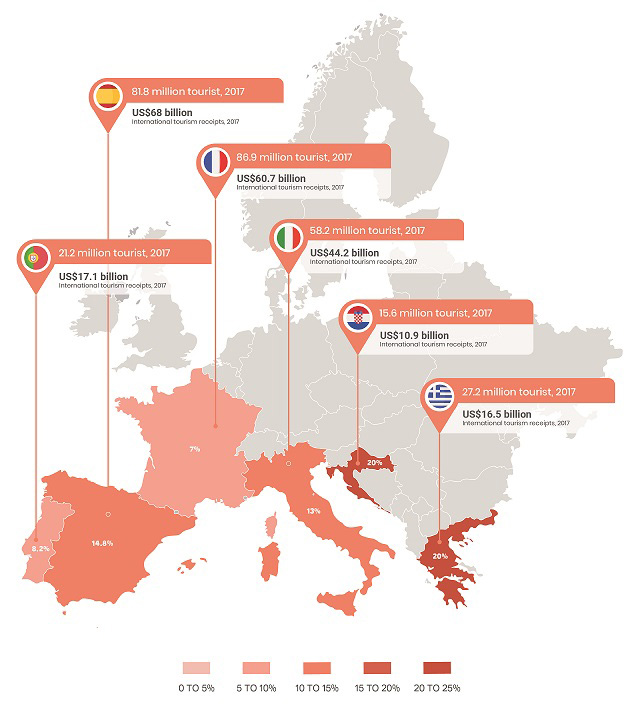 Who will be able to bring back tourists more rapidly?

Very gradually and at a dispersed pace, Europe is coming out of lockdown. Prospects on the health side are improving, prompting destinations to plan for recovery. In fact, the recovery is taking place as quickly as possible for certain destinations that have suffered very badly from the crisis. Italy sounded the death knell for the closure of its borders on 3 June, opening up above all to cross-border activity with its neighbours, as Italy's tourist hotspots are still deserted. The rest of the European Union countries mostly reopened their borders on 15 June, with a few notable exceptions.

Italy sounded the death knell for the closure of its borders on 3 June, opening up above all to cross-border activity with its neighbors, as Italy's tourist hot spots are still deserted.

In Spain, it was on 22 June that the first tourists could set foot in the destination "sol y playa", especially the French who contribute strongly to tourist activity on the Catalan coast or in the Basque Country. Some destinations that are very dependent on the summer tourist season are still cut off from the world with very few air connections. Professionals in the Balearic Islands or the Canary Islands cannot therefore afford to resume their activity without transport to supply them with tourists. Hoteliers from the Balearic Islands have come together to carry out a pilot project to welcome German tourists as soon as possible before the official date of 1 July. The traceability of visitors is part of this project.

For more than 10 years, Croatia has been experiencing a strong growth in tourism, sometimes with destinations in overtourism. The country has just over 4 million inhabitants and welcomed nearly 18 million international visitors in 2019. The effects of the halt in tourist activity are therefore devastating for some destinations. At the end of May, Croatia announced the reopening of its borders to 10 European countries: Germany, Austria, Lithuania, the Baltic States, Poland, the Czech Republic, Slovakia and Slovenia.

Portugal has adopted a different approach, launching a national "Clean & Safe" health labelling initiative as a precursor. The label carried by Turismo de Portugal allows all tourist structures to adhere to the approach free of charge for one year. A strong gesture of reassurance for tourists and legible to them. In fact, while many professionals are adopting certification and labeling approaches, the destination Portugal is harmonizing the management.

Greece, which had put in place very strict lockdown measures within its borders, given the low circulation of the virus in the country, increased the number of messages sent to its outbound tourist clientele. The resumption of tourist activity is vital for the destination. Athens and Thessaloniki airports will therefore reopen on June 15, followed by all the others in the country from July 1. From 15 June to 29 outbound countries will also be authorized to come to Greece, excluding Spain, Italy and France, where the virus has widely circulated.

On the French side, the authorities are calling for a rediscovery of France and its assets, relying on local customers to revive tourist activity. Since June 2, many activities have resumed with a downside for Île-de-France, which remains with Mayotte and French Guiana in the orange zone. The French seaside destinations had developed a strategy of conquering business tourism in order to broaden the wings of the season. This sector has been badly affected and the expected recovery in September is still subject to many conditions:

One thing is certain, all these destinations will fight to conquer as much market share as possible in the hope of restoring vitality to professionals in the sector. The communication calendars will therefore be decisive as much as the angles and tones chosen to differentiate themselves in the ambient cacophony that will resonate throughout June and early July to attract tourists.

The vast majority of these destinations do not have a very dynamic domestic market in terms of tourism and in high season welcome an overwhelming majority of foreign clients, particularly from Northern Europe. The quarantine imposed by the United Kingdom on anyone entering its territory, whether resident or not, is a real obstacle to the tourist attendance of a proportion of British tourists.

Coupled for certain territories, particularly the Côte d'Azur, with the strong dependence of international customers, the problem becomes more complex for the dynamics of recovery.

It expects 90% of its short and mediumhaul traffic to resume by September, an area of uncertainty for the operators of these destinations in the current absence of a timetable for reopening. The group announces the reopening of 102 destinations from its Frankfurt hub and 88 from Munich by September, including Malaga, Alicante, Valencia, Naples, Rhodes, Palermo and Faro

For British Airways, the Southern European destinations are:

After the announcement of the loss of 12,000 jobs last April, there has been no official communication to date on the resumption of traffic. When and how will British tourists, millions of whom are fueling the southern European economy this summer, be able to consider leaving the UK quickly?

As for Air France, which serves :

The company announces a gradual resumption of traffic from the end of June, but without exceeding 15% of traffic capacity compared to its usual rotations, i.e. 75 aircraft out of the 244 in the operator's fleet. Among the destinations that will be served from and to Charles de Gaulles Airport are: Bologna, Florence, Heraklion, Ibiza, Lisbon, Milan, Naples, Palma de Mallorca, Porto, Rome, Venice.

On the low-cost side, strong providers of summer travellers, the announcement of the resumption is also being made. Easy Jet announced on June 3 the reopening of several hundred summer destinations with the sale of one million seats in European destinations for £29.99. The company plans to take over ¾ of its destinations by August and 50% by July

RyanAir announces the resumption of operations of 40% of its flights by July. The airline also offers single flights at £29.99 to destinations such as Portugal, Spain, Italy, Greece and Cyprus from the main North European departure areas, namely Ireland, the UK, Belgium, the Netherlands and Germany, from 1 July.

The recovery will be gradual, however, and depends not only on the reopening of routes for the public but also, and above all, on the appetite of tourists for international flights. This recovery is also hampered by the message of many tourist promotion organizations, which call on tourists to spend their summer in their country of origin, particularly in France, which usually sends 9 million tourists outside its borders every year.

Destinations that hace shown their resilience

Looking back and from a broader perspective, it is clear that the tourism industry is showing strong resilience. Looking at the crises that have hit the European and global markets we can see the dynamism and resilience of the European tourism market.

The financial crisis between 2008 and 2009 had a strong impact on RevPARs, which lost -8.2%. From 2010 onwards, however, performance returned to positive territory. However, the scale of the current crisis and the impact it will have on the GDPs of countries around the world is more comparable to those of 1929 and 1993. The 1993 crisis, after leading to hotel price inflation, also signaled a complete restructuring of the market. The development of standardization of supply, particularly in the budget and economy segments, dates from this period of crisis. It will have led to the creation of new hotel concepts. Without presuming the future of the hotel offer, this extreme situation will perhaps lead to a readjustment of certain concepts.

Despite the crises, most European markets have shown good resilience with RevPARs rising rapidly after the crises. However, it should be remembered that the one currently hitting the world is much more brutal than the previous ones recorded.

In Spain, the lockdown has led to the administrative closure of almost all hotel properties as of March 18. Only a few properties have continued to accommodate medical staff. The economic offer has fared best, with 38% of the offer open on 3 June. However, all upscale properties remained closed between March 26 and May 26, 2020, with 8% of properties in this segment reopening to the public on June 3. 21% of super-economy properties reopened between June 1 and 3, with 8% of the mid-range offer. However, RevPARs do not reach double digits in open properties.

In Italy, property closures began on March 13. Reopening began on May 18, with 45% of midscale properties open since June 1.

In Greece, closures were staggered between March 13 and 21, with gradual reopening also since June 1. 17% of the upscale offer, 22% of the economy offer and 43% of the upscale offer. Each southern European country has followed different recovery paths following the latest events that shook the European market and the world: the attacks on European soil in 2015 and 2016.

France was the most affected destination, having suffered several attacks on its own soil. It had recovered its performance, which had been on the rise since the beginning of 2017, only to fall back into the red with the Yellow Vest crisis, which had seriously damaged the destination's image. The French market, where supply still falls short of demand, remains a safe haven for most investors in the medium and long term. The efforts made by the French government to maintain the viability of companies in the face of the Covid-19 crisis have reinforced this attractiveness. French seaside destinations remain attractive with worldrenowned and attractive infrastructures, offers and landscapes.

In Spain, despite a hitch between the spring and summer of 2018, the progress of the performance indicators was largely in the green. Catalonia posted more moderate performance.

Italy's performance has been more erratic, with the recovery starting at the same time as that of its French neighbour at the beginning of 2017.

Portugal did not experience the crisis apart from a hitch at the end of the summer of 2018, which can be explained by the significant growth of ADRs which had been practiced during the same period in 2017.

Greece has been facing rather flat or even negative performances since the beginning of 2019.