How is the city performing as a destination? What is the demand from travellers? And how is the city’s tourism strategy changing? Part two.

Geneva has seen growing success among foreign travelers, particularly due to the "high" quality of its hosting, a quality hotel supply and good connectivity with both airlines (EasyJet) and land routes.

It is interesting observe that certain foreigners favor some hotel categories over others. Thus, the British prefer upscale 4-star hotels, French, Germans and Spanish are divided among 3 and 4 star hotels, countries in the gulf are very interested in luxury services, Italians favor the midscale (3 stars), and Russians and Chinese are divided fairly evenly among the mid-upscale and luxury segments.

Adrien Genier, Director of Genève Tourisme & Congrès since January 1, 2019, explains the formula for success offered by Geneva through a varied and complete tourism offer that is highly appreciated by foreign visitors: "Urban stays close to nature are a very pronounced trend in international tourism. Nowadays, visitors want to be able to sleep in a city to enjoy the cultural or gastronomic offer but also to make day trips. These figures show that Geneva, which is magnificently situated on the shores of Lake Geneva, close to the Alps and boasts an excellent cultural and culinary offering, is the ideal place for them."

The Léman Express, portal to Geneva's back country

The project consists of realising a 16 kilometre rail structure to connect the Swiss network (Geneva) to the French network (Annemasse), including the main business centers in Geneva. It aims to offer an efficient alternative to individual transport, more practical and more environmentally friendly. As a result, 14 kilometres of mainly underground sections will extend across Switzerland, involving major construction work on new bridges, tunnels and covered trenches.

The line will serve 5 railway stations, including Lancy-Pont-Rouge, Carouge-Bachet, Champel-Hospital, Geneva-Eaux-Vives and Chêne-Bourg. The latter were designed by French architect Jean Nouvel, winner of the architectural competition CEVA stations. His concept is based on the use of large glass bricks, which allow the creation of safe, bright, user-friendly and unique underground spaces. On the French side, the route will extend over 2 kilometres to reach the station in Annemasse. This station is currently undergoing renovation, financed by the French partners.

The construction of the CEVA line will allow the Léman Express to be put into service. The latter will consist of a 230-kilometre route, within a 30-kilometre radius around Geneva and Annemasse. Ultimately, the CEVA network will include 45 stations in Switzerland and France. 6 trains per hour are planned to accommodate 50,000 passengers daily. In addition, the construction of 1,000 housing units is planned in the districts of La Praille, Eaux-Vives and Chêne-Bourg. 240,000 inhabitants or workers will live within 500 metres of a CEVA station in 2019. 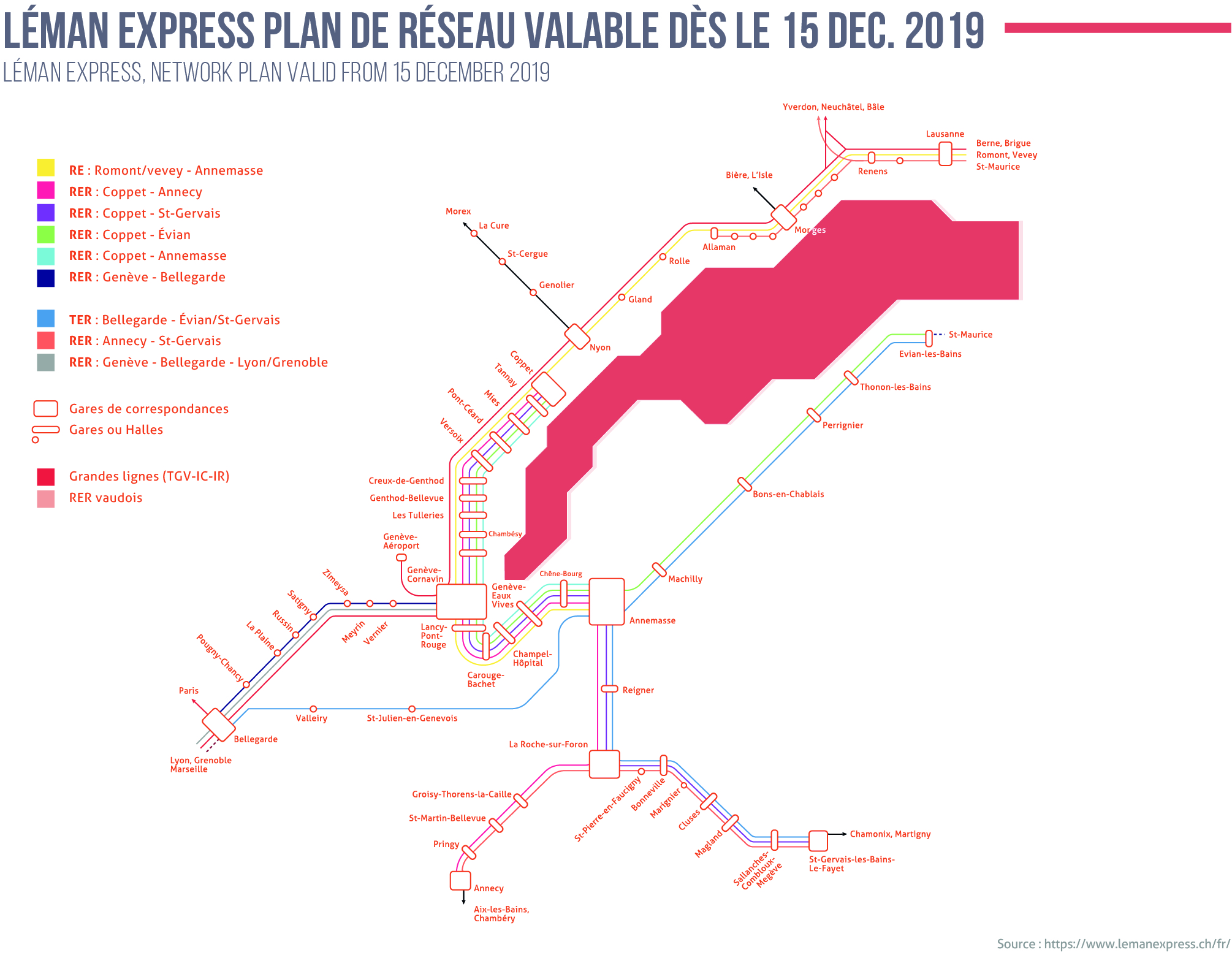 The arrival of the Léman Express will change everything, allowing a rush of tourists to the hinterland of Geneva, particularly in Haute-Savoie. The network will in fact link the Geneva conurbation to sites and towns of tourist interest such as Annecy, the lakeside town of Evian-les-Bains and Saint-Gervais-les-Bains, the latter being the highest town in France since it is home to Mont Blanc.

But for some, the arrival of the Léman Express will not be enough to ease congestion in the conurbation of Geneva. Indeed, the bottleneck is so tight around the few roads during peak hours, notably due to the strong presence of cross-border workers in the area, that it will be difficult to absorb all the demand for daily travellers. Marie Dégremont, a researcher at France Stratégie (the General Commissariat for Strategy and Foresight (CGSP) attached to the Prime Minister) warns about this. She has in fact carried out a study on the mobility of Greater Geneva, after which deduced that, according to daily traffic data, the arrival of the cross-border RER would not solve the problem.

In 2017, 400,000 international passengers were registered at customs checkpoints, of which only 6% would have travelled by public transit. By way of comparison, authorities anticipate 50,000 daily users of the Léman Express. The question therefore remains as to whether the trains will be sufficiently available to accommodate tourists, parallel to the commuter traffic of the working population.

On the other hand, tourism development involves the supervision and limitation of short-term rentals such as Airbnb and similar offers. The City of Geneva, which had set the limit at a maximum of 60 days of rental per year in April 2018, had to revise its restrictions upwards to 90 days in 2019 due to legal action with third parties. Nevertheless, the Geneva authorities pursue their reprehension of any excesses of this quota, with the help of five controllers who check the "legality" of the advertisements. The Valais Tourism Observatory reportedly recorded more than 3,000 advertisements at the end of January 2019, compared with 2,755 (4,736 beds) in June 2018. It has also been calculated that Airbnb alone would have generated between 6 and 12% of the Swiss hotel industry's revenue in 2018.

Thanks to its geographical location at the crossroads of the Franco-Swiss borders and at the entrance to the Alps, Geneva has been a true crossroads on the European continent for centuries. Today, Geneva Airport continues this function by serving no less than 148 destinations around the world thanks to 57 different airlines.

These include EasyJet, which chose Geneva airport in 1998 as its second largest hub after London-Gatwick. This airline alone serves 74 destinations on short and medium-haul flights in Europe, North Africa, Israel and Egypt.

As a result, airport traffic has been growing steadily over the last twenty years. Over the last ten years, not only has traffic increased by 53.4%, but the seasonality of the airport has been accentuated during leisure periods, namely the spring and summer holidays and year-end festivities.

Peak activity at the airport occurs three times a year: in March, July to August and December. However, as this is primarily daily transit traffic, few people stay in Geneva; people are either connecting with another flight or travelling to another destination by train or car.

Thus the flow of passengers at the airport does not necessarily reflect the number of people visiting the destination or its hotel facilities, as this difference is marked by a different seasonality. On the one hand, there is a leisure clientele that tends to pass through the airport, and on the other hand, there is a strong business clientele that stays in the city.