While the two cities may rival one another in sports, crystallizing historical differences, they join forces in their fight against online housing platforms. Both are trying to develop their hospitality industry with quantity and quality, they have become laboratories in Europe for a new way of developing tourism.

The capital of Catalonia enjoys a diversified economic activity, with services and industrial production accounting for 59% and 36% of the activity respectively. In addition to automobile manufacturing, electronics and chemicals are important sectors for the city's dynamism.

The Mediterranean city benefits from its central position between the Maghreb, France and the Balearic Islands to attract cruise passengers to complete the activity of its port, which is one of the most important in both commercial and merchant sea traffic in the Mediterranean.

With a long history of dealing with its various Mediterranean neighbours, the city has made tourism, international trade and the arts major sectors of activity in the urban area.

Barcelona-El Prat Airport welcomed more than 50 million passengers in 2018, with traffic up +6.1% compared to the previous year. The low-cost company Vueling, created in 2004, has set up its headquarters near the platform; it is currently the main player with more than 17 million passengers transiting through this airport. It should be noted that among the top 5 airlines carrying the most passengers, 4 are low-cost airlines, namely Ryanair, EasyJet and Norwegian. Lufthansa completes the ranking with nearly 1.4 million passengers in 2017. The 15 main international routes connect Barcelona to other European cities, with London, Paris and Amsterdam in the lead.

Meanwhile, Madrid is more successful with trans-Atlantic conections. One conurbation faces its Mediterranean basin and Europe, while the other strengthens its routes to South America.

As an entry platform into the country, with Madrid-Barajas airport, which checked in nearly 58 million passengers in 2018, 71% of whom arrived internationally, the capital has managed to transform its economy to continue to attract both business and leisure customers.

The capital’s economy is mainly focused on the service sectors: financial, banking, business services and logistics. In its Cuatro Torres business district, it is home to some of the country's leading companies.

Madrid also has an important congress centre, the Feria de Madrid, which presents exhibitions biannually (with more in odd-numbered years); this activity is reflected in the arrivals and performances recorded in the capital.

In keping with the city’s aspirations, the World Tourism Organisation, which is the institution intended to promote and develop tourism, has set up its offices in Madrid. Other international organizations have also established themselves in Madrid, such as the Organization of Ibero-American States, the Spanish Royal Academy and the Cervantes Institute.

A hotel supply developed in the upscale segments

Barcelona has established itself as one of the key destinations for urban tourism in Europe with nine buildings listed as UNESCO World Heritage Sites. The city's great heritage and cultural wealth enables it to attract an ever-increasing number of leisure visitors: leisure tourism now represents a little more than one in two visitors, taking precedence over business tourism, which remains very important in the Catalan city.

Catalonia is the most visited autonomous community in the country in 2017 with 19 million tourists, representing 5% increase compared to the previous year. Catalonia also had the highest tourist spending ratio, 22.1% of total revenues come from tourism compared to 10.2% for Madrid.

On January 1, 2018, the Catalan capital hotel supply was mostly up- and mid-scale hotel. With 16,264 rooms, the high-end / luxury supply is more developed in Barcelona than in Madrid (13,385 rooms), marking the only difference in this respect between the two very similar supplies. 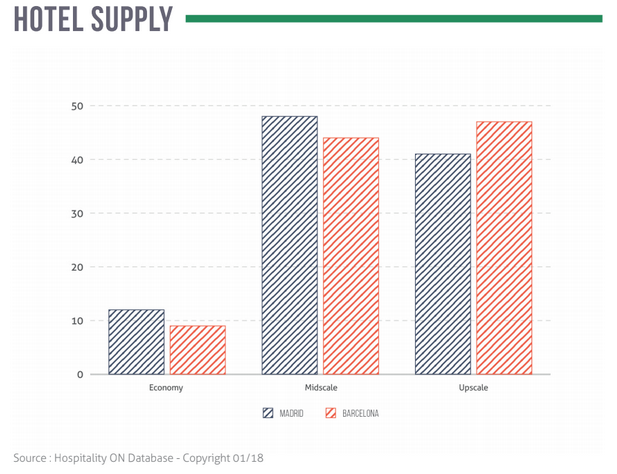 Barcelona therefore has a more developed high-end supply than Madrid, with the main brands operating on this segment being Sercotel, H10 and Expo Hoteles. Other luxury brands have also opened prperties in the port city such as Fairmont and Mandarin Oriental.

While Madrid is certainly a little behind in this segment despite a strong presence of Melia Hotels International, Hotusa and NH Hotel Group, ongoing development shows a growing appeal of high-end brands in the capital. The Hyatt group enters the market with the opening of the Hyatt Centric Gran Via Madrid (159 rooms), Autograph Collection by Marriott has opened a 3rd property with 71 rooms in a fully renovated building and DoubleTree by Hilton also enters the market with a hotel near the Prado Museum in a new building with 61 rooms.

The Paradores de Turismo de España - a unique Spanish hotel chain consisting of a network of high-end, state-managed historic and cultural buildings and adapted for use as hotels – has a 128-room hotel near the capital.

Among the luxury brands, the Ritz Madrid, a 167-room luxury hotel that was taken over in 2016 by Mandarin Oriental, has closed its doors to undergo complete renovations estimated at 100 million euros. Four Seasons, meanwhile, could also complete the renovation of the historic Canalejas complex with 215 rooms and a shopping centre.

Regulation of online hosting platforms: the two cities are fighting the same battle

Both Barcelona and Madrid have also seen the development of a supply of apartments for rent in recent years. In 2014, Catalonia recorded 9,600 "viviendas de uso turistico", representing one third of the city's bed supply. In August 2015, the people of Barcelona elected Ada Colau, a former member of the Indignés movement, thereby fueling complaints from locals that property prices were rising. Ada Colau makes the regulation of tourism one of her main areas of focus, particularly through the fight against growth in the accommodation platform offer. Five months after her election, there are nearly 18,200 housing units on Airbnb and 4,600 on Homelidays, which is the same size or even larger than the hotel supply.

Regulations currently in place limit landlords to renting up to two bedrooms in their accommodations for a maximum of 31 days. An authorization from the town hall must be obtained to rent the entire apartment, but tourism licenses are no longer being granted in the city centre since 2014.

The new mayor of Madrid since June 2015, Manuela Carmena, supported by the left-wing party Podemos, has made her city take an even more extreme direction in regulating furnished housing rentals. The goal is to make it impossible to rent 95% of the city’s apartments via the online platforms.

To achieve this, the mayor, who has had a long career in the judiciary branch, will create a rule according to which landlords must prove that their dwelling has an entrance independent from the rest of the building. This condition is almost impossible to meet as it effectively excludes apartments in residential buildings in the city centre. The owners of the apartments will be able to rent their main residence less than three months a year.

Barcelona’s hotel industry was weakened this year, but it is in good shape in Madrid

Barcelona’s hotel industry, which was particularly affected by independence demonstrations, recorded a decline in performance in 2018 Despite a dynamic year-end, occupancy rates at the YTD in November 2018 show a slight drop of 0.9 points, bringing Catalonia back below the 80% mark. It will mainly be prices down by 3.2% that will have led to lower revenues in 2018 (-4.3%).

The capital, which usually performs better in odd years due to a busier calendar of events, Saw its ORs climb (YTD November 2018) by 1.5 points. Although its prices also increased by 2.5%, resulting in a 4.6% increase in its RevPAR, its revenue per available room remains lower than Barcelona's, respectively at €78.5 excluding tax and €95.5 excluding tax.

The two conurbations are now concentrating on limiting the conversion of apartments into tourist accommodations in order to ensure a quality of life for its inhabitants, while at the same time making their conurbations more attractive to tourists, thereby creating jobs in tourism that cannot be relocated.

Among the methods used, the development and promotion of the cultural offer one way to provide more facilities to inhabitants that is supported financially by paid tourist visits. Other Spanish cities such as Bilbao and Malaga have succeeded in attracting new visitors to their cities, through the development of museums and the enhancement of their heritage.

Madrid, which already has a significant offer with the Prado and Reina Sofia museums, opened a new cultural centre, CaixaForum, in 2008. Barcelona, which already boasts works by Picasso as well as the Miró Foundation, recently inaugurated the Civic Centre Lleialtat Santsenca in 2017.

Both cities have a strong tourism base to continue to attract visitors from all over the world. The struggles the two cities have entered into to achieve a better balance between quality of life for their inhabitants and tourist attraction were born out of the suffering experienced by local residents as a result of over-tourism. Thanks to the young population and creative initiatives, solutions to this malaise could also emerge from Barcelona and Madrid.