Brussels’ hotel supply reveals a highly diversified clientele where only 21% are national clients, while the rest are foreign. In other words, Brussels is a destination with an international reach, with more than three quarters (79%) of its clientele from foreign countries.

The leading outbound market for Brussels is France, which supplied 11% of international arrivals. The Belgian capital is just 2 hours by high-speed train from the French capital and just one hour from the city of Lille. For Belgium overall, the Dutch recently surpassed British arrivals due to the complicated situation with Brexit, placing the Dutch in the lead in the foreign tourist segment in the country.

Other source markets for Brussels are Spain (7%), the United Kingdom (7%), the United States (7%), Germany (6%), Italy (4%), the Netherlands (4%), the BRIC countries (5%), and other countries (28%). The leading markets, with exception to the United States, are European. This may be explained simultaneously by the presence of European bodies as well as by these countries’ proximity, which, combined with the booming low-cost airline industry, makes the destination very accessible both geographically and financially. 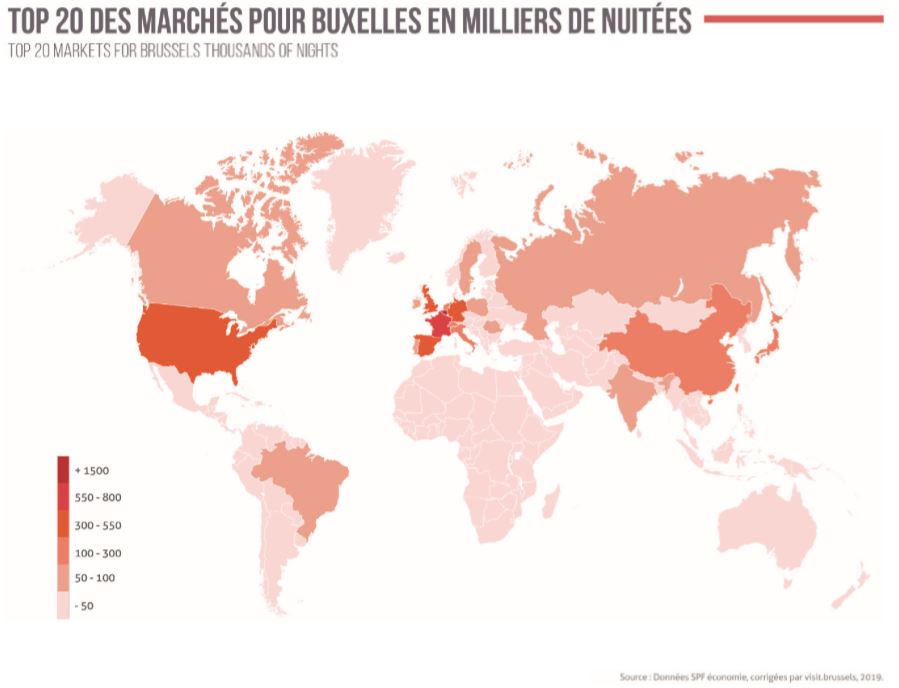 Very fluctuating demand during the year, including during the low season

Demand is fairly well distributed throughout the year. This market does not exhibit a high degree of seasonality as it does not have a particularly high or low season, but a succession periods with a high volume of visitors interspersed with slower periods. Nonetheless, these periods are more or less cyclical year after year resulting due to demand.

The occupancy rate of Brussels’ hotels thus fluctuates between 60% and 90% across the year in the years from 2012 to 2018, with exception to the year 2016 when the OR varied between 50% and 70%. The two “high season” periods correspond to spring and fall, while the two “low season” periods correspond to summer and winter, which is emblematic of a business destination. In other words, demand is concentrated in what is usually referred to as off-season and avoiding the periods of the long annual vacations that are in the summer and during the winter holidays.

Two phenomena are evident in this fluctuation in demand. First of all, there is the strong presence of business tourism, which occurs in low season and fills rooms from March to June and then from September to November. There is the rise in leisure tourism during the summer season, which is particularly visible at the beginning of the summer, for example in June 2018 when the monthly occupancy rate climbed to 80.4%, and then at the end of the summer when it rose again to 80.2% in September 2018. In addition, June and September posted some of the best performances of 2018, because during these two months, both business and leisure markets were strong. However, the best results are in autumn, more precisely from October to the end of November, when the monthly occupancy rate rose to 83.0% and 81.9% respectively in 2018, demonstrating the impact of MICE customers (Meetings, Incentives, Conferencing, Exhibitions) on Brussels' hotel market.

This trend is all the more evident in terms of average daily rates as they vary in proportion to occupancy rate each month during the course of the year. The slow periods are in winter and summer, and it is particularly pronounced during the two months of the summer school holidays, when it averages around €70-80 including taxes. By way of comparison, the ADR fluctuates between €95 and €115 each winter, meaning from December to February, from 2012 to 2018. The "high" seasons, meaning spring (March to June) and fall (September to November), show a monthly ADR ranging from €115 to 130 including taxes. The best ADR for the year 2018, as well as the best OR, was achieved in June with €126.90 including taxes.

In conclusion, the overall image of the destination suggests that it is destined to embrace the business tourism market, both in terms of its supply and the demand it receives. However, far from locking itself into this niche, the Belgian capital is gradually opening up to other customer segments and developing its leisure, cultural and artistic offer. The results of this strategy are already being felt. Now the challenge is to reconcile past and future, business and leisure, business and culture, in order to complete the development of a mature destination that has the ambition and audacity to renew itself.