As Belgium's administrative capital, Brussels had almost 1.2 million inhabitants at the end of 2018, and more than twice as many in its extended urban area. A tourist excursion city for Europeans, thanks to its location, heritage and history, Brussels is also bolstered by strong business tourism activities, with many multinational companies and organizations linked to European Union Institutions (five) and international institutions (NATO headquarters), and many congresses. As a result, Brussels is a world capital for lobbying, congresses, the international press and diplomacy, which, combined with a high capacity for hosting major events, places it among the leading business destinations on the European continent. This synergy between business and leisure activities allows the city to maintain a steady and strong occupancy rate throughout the year.

This gap tends to narrow over the years, as Brussels increasingly asserts itself on the international scene as a cultural and art centered destination, particularly for its cultural institutions (121 museums and the Grand-Place classified as a UNESCO World Heritage Site) and concerts (22 concert halls). There were 8,745 guided tours in 2018.

Today the city focuses on promoting recurring events, such as the “Winter Wonders” event, which is held from late November to early January and welcomes three million visitors each year. On the other hand, summer is a low period for the destination. The city is therefore looking to develop over this period, in addition to trying to maintain and strengthen its MICE activity (business tourism events: meetings, incentives, conferences, exhibitions...) during the rest of the year. In the latter niche, the destination recently lost one of its largest annual trade shows, SeaFood, to a competing city. This type of event being a real challenge for Brussels, the city will have to compensate this loss by one or more events next year.

The development strategy adopted by the destination for its approach to leisure customers is very successful, with 2018 marking the first year in which there are about the same volume of leisure stays as business stays. Noémie Wibail of Visit.brussels explains that "what is exceptional is the very small difference between weekends and weekdays, indicating a good balance between leisure and business" in July 2019. This was especially surprising since poor performance was expected in 2019 due to the European elections in May. In reality, demand only dropped during election week, only to recover afterwards. By May 31, the OR had already posted spectacular double-digit growth (+23.51 percentage pts) and this trend continued throughout June and into early July.

On January 1, 2019, metropolitan Brussels had a total of 394 registered tourist accommodations, meaning 17,440 rooms available (data from the 2018 annual report of visit.brussels) on the market for all accommodation solutions combined (hotels, apart-hotels, tourist and furnished residences, social tourism accommodation centers, registered accommodations with inhabitants, etc.). It should be noted that an alternative and not systematically declared offer is emerging on the market through platforms such as Airbnb and Home Away. The City of Brussels estimates that an average of 5,815 private dwellings are placed on the market each year (AirDNA data, reported in the 2018 annual report of visit.brussels); this is a significant volume that fluctuates from one month to the next throughout the year, reaching a peak during the summer (in August 2018, 6,748 accommodations were listed).

The supply of strictly hotel accommodations consists of 141 properties for 15,742 rooms (data visit.brussels), which represents the majority of the official accommodations supply. The hotel portfolio includes primarily properties belonging to major hotel chains such as the Accor Group, Jin Jiang, the Intercontinental Hotel Group (IHG), or Thon Hotel and Pandox, the latter two being the largest owners in this market. The hotel chains accommodations supply includes 107 hotels (15,568 rooms) of the city's total of 141 hotels (MKG Consulting - European Hospitality Report Belgium data). The chain hotel supply grew only moderately last year, by +1.1% in additional chain operated rooms, representing a net gain of 172 keys.

These properties are mainly located in the mid-range and high-end segments, which share most of the customer base. These segments respectively account for 45% and 47% of the hotel supply in 2018 in terms of number of keys, namely 6,343 rooms for the mid-range segment and 6,704 rooms for the high-end segment. The budget and economy category are largely in the minority in the market, with only 8% of rooms available. In other words, this market is highly representative of a destination that is very business-oriented, and the supply tends to meet the expectations of this particularly demanding clientele, which has a strong purchasing power. 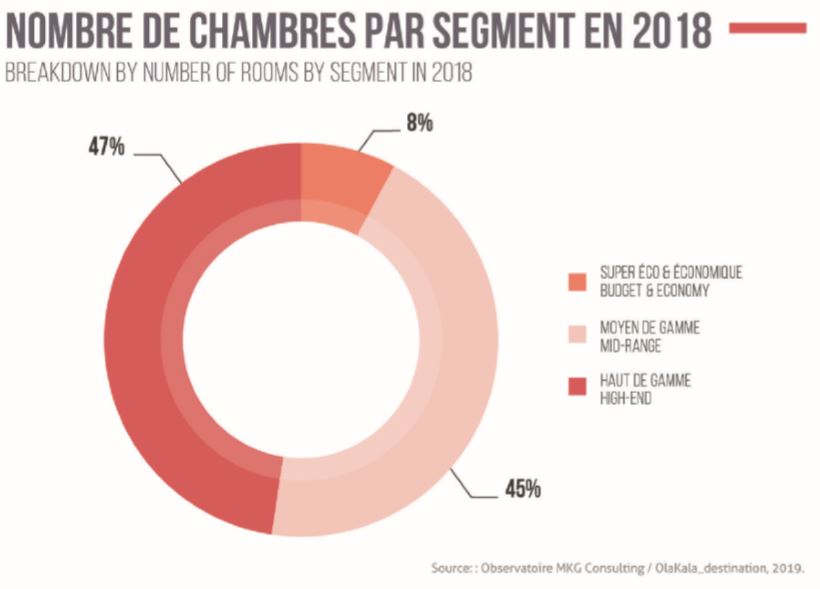 Results are following an uptrend, attesting to the destination’s strong resilience

Overnight stays increased in 2018, but especially in 2017 with growth approaching the double digits (+9.8 points). This significant increase follows the local recession of 2016 that was caused by the terrorist attacks in 2015 and 2016, which had a major impact on the destination in those years. However, as the Brussels market is very resilient, the results quickly regained momentum.